Netflix's latest series Heartstopper had a stunning 289% growth in demand this week as it shot up the rankings to become the fifth most in-demand new series in the US. The show has been widely well received and extolled for its heartwarming story among audiences and critics alike; once again showcasing the value of diversity and inclusion in content. Heartstopper seems to be on the road to cementing itself as one of the top LGBTQI+ releases of the year alongside HBO Max's Our Flag Means Death, which remained the top breakout show in the US for the sixth week in a row. 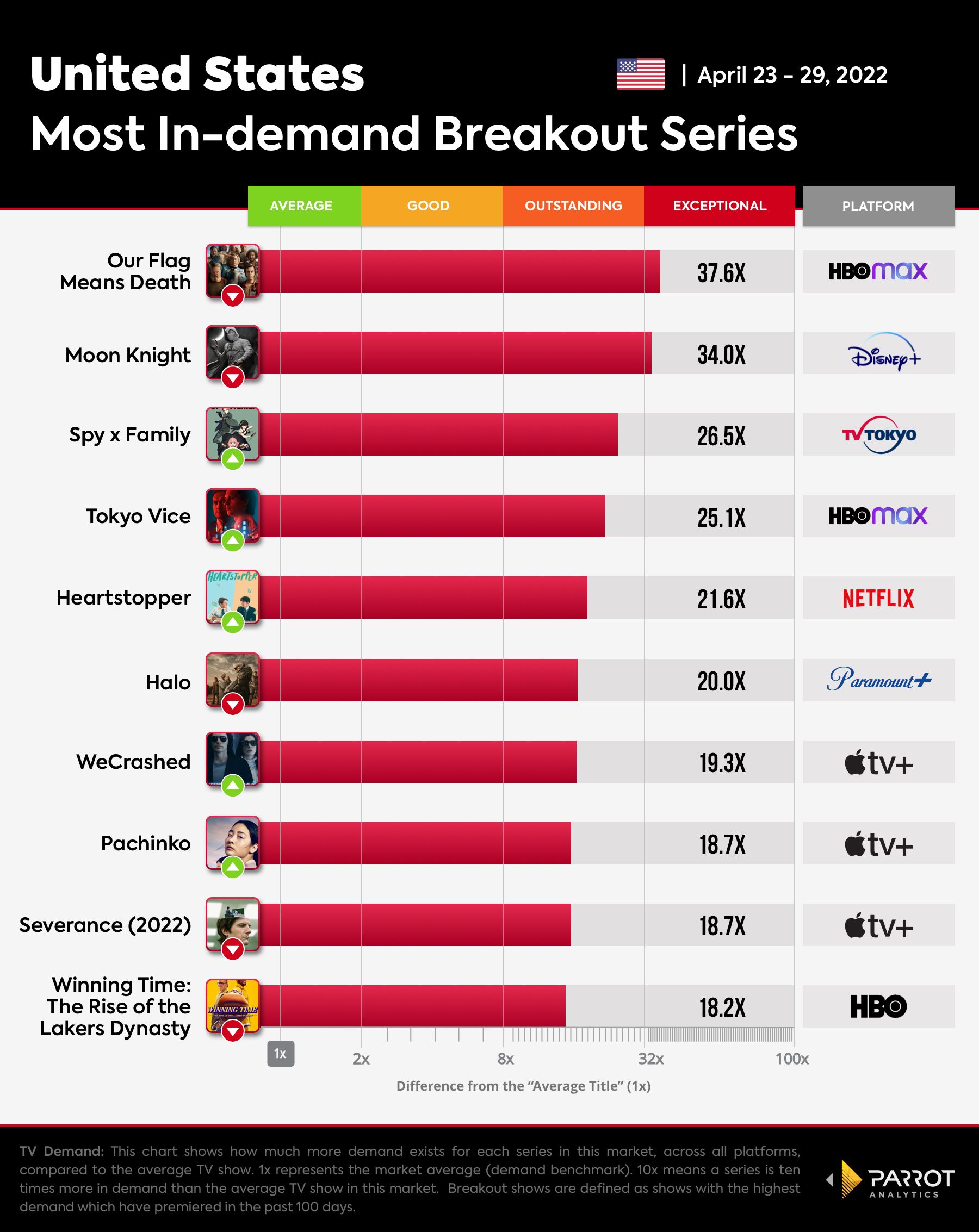 Tokyo Vice maintained its position in fourth place in the rankings with 25.1 times the average series demand, despite having only a marginal increase in demand for the series this week. It ranked just below TV Tokyo's Spy x Family which had 26.5 times the average series demand. Both shows appear to be battling it out for the third position in the rankings as Our Flag Means Death and Moon Knight seem to have firmly taken over the top two positions in the rankings over the last few weeks.

Apple TV+'s latest tech crash series WeCrashed was the seventh most in-demand new show in the US after a 3% increase in demand this week. While new Apple TV shows might not have the same level of demand as other tentpole competitor shows (with the exception of Ted Lasso), it is interesting to note that three of the top ten new shows come from Apple. Pachinko also had 13% increase in demand and placed eighth in the rankings, while Severance had an 8% decline in demand and sat in ninth place this week.

Amazon Prime Video's Outer Range slid off the breakout shows rankings after its debut on the charts last week. The series only premiered on April 15th with a hybrid release strategy, making it likely that we might see it back on the charts as it heads closer to the finale on May 6th. Rounding off the rankings is HBO's Winning Time: The Rise of the Lakers Dynasty in tenth place with 18.2 times the average series demand in the US for the week. The critically acclaimed sports series, which premiered on March 06 and is set to air its season finale on May 08, has already been renewed for a second season after the positive reception of the first few episodes. It will be interesting to see how much of an increase in demand is observed for the show in the week after the upcoming finale episode airs.