As global content spend continues to increase across linear and streaming television, finding white space opportunities to invest in without breaking the bank becomes more integral to strategic success. In Europe, demand for competitive unscripted programming, including series like Survivor and Big Brother, have seen considerable growth with localized adaptations. Pursuing more localized adaptations that appeal to underserved audiences, including women and men in the Gen X demographic group, while targeting back catalogs for library acquisition could create a strong competitive position.

Take MasterChef, the series starring British chef Gordon Ramsay. The series is one of the most in-demand reality series in the United States, with 18.2x the average demand of all other reality and competition series between August 1st and August 30th, 2022. The series also has the seventh highest travelability index score globally for all reality and competition series, with more than 21.5x the average travelability score of all other series. This means that a show like MasterChef is going to find a stronger audience base in countries around the world than series like The Great British Bakeoff, Top Chef, and Project Runway. 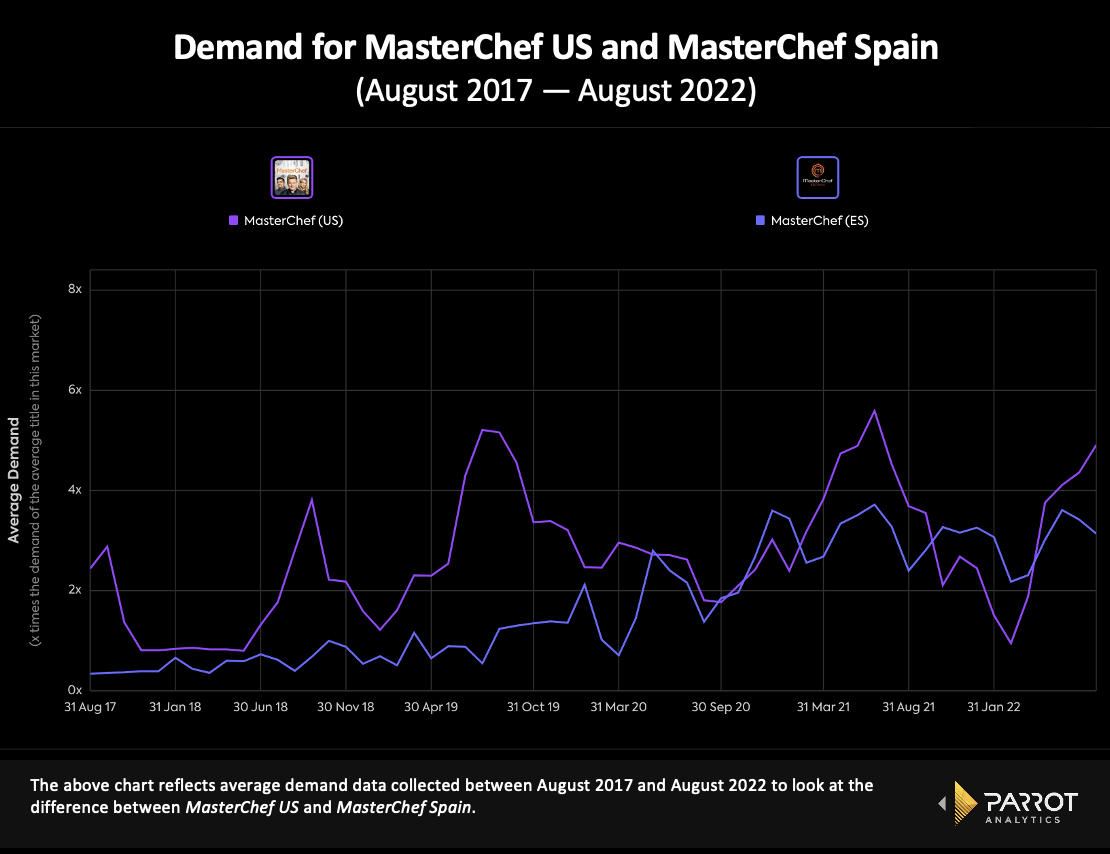 The above chart looks at how localized adaptations of a series like MasterChef can perform. In Spain, MasterChef has seen a steady increase in demand over the last five years, and overtook MasterChef US at certain points within that same period. The format is easy to replicate, costs on unscripted programming are far less than scripted, and because it’s such a recognizable type of television, audience onboarding doesn’t require much education (ie additional marketing).

Looking at reality shows with the highest level of travelability in general also demonstrates that talent-driven competition series drive the strongest adoption globally. The Voice, America’s Got Talent, RuPaul’s Drag Race, and Britain’s Got Talent have the most exceptional level of travelability, something that only 0.2% of shows reach globally. More impressive is that of the top 10 most travelable series, 40% are localized adaptations from Britain and Australia. While the data suggests that adaptations in English-speaking countries globally, our data reiterates that demand for unscripted competitive programming across Europe has increased continentally. 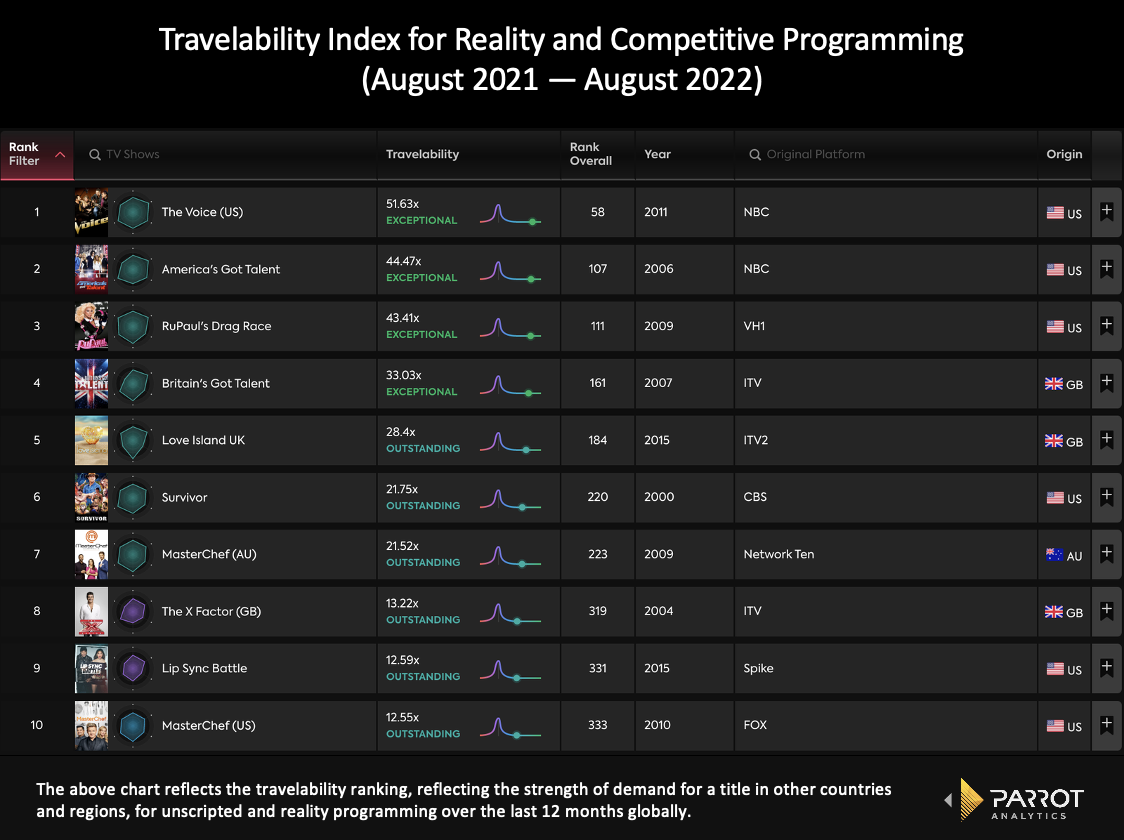 Different unscripted competition shows appeal to different demographics. MasterChef Junior was a way to broaden the total addressable market for the series by introducing it to a younger generation who could find a way into the series and continue to age with the show, switching over to the original MasterChef as they grew older.

Demand for unscripted competition reality programming in Europe has increased by 33% over the last five years in Europe, while demand for unscripted reality programming increased by 12.5%. Localized adaptations continue to find growing demand as well, as television becomes more global and audiences are seeking out their own versions of reality TV series they saw in syndication previously. 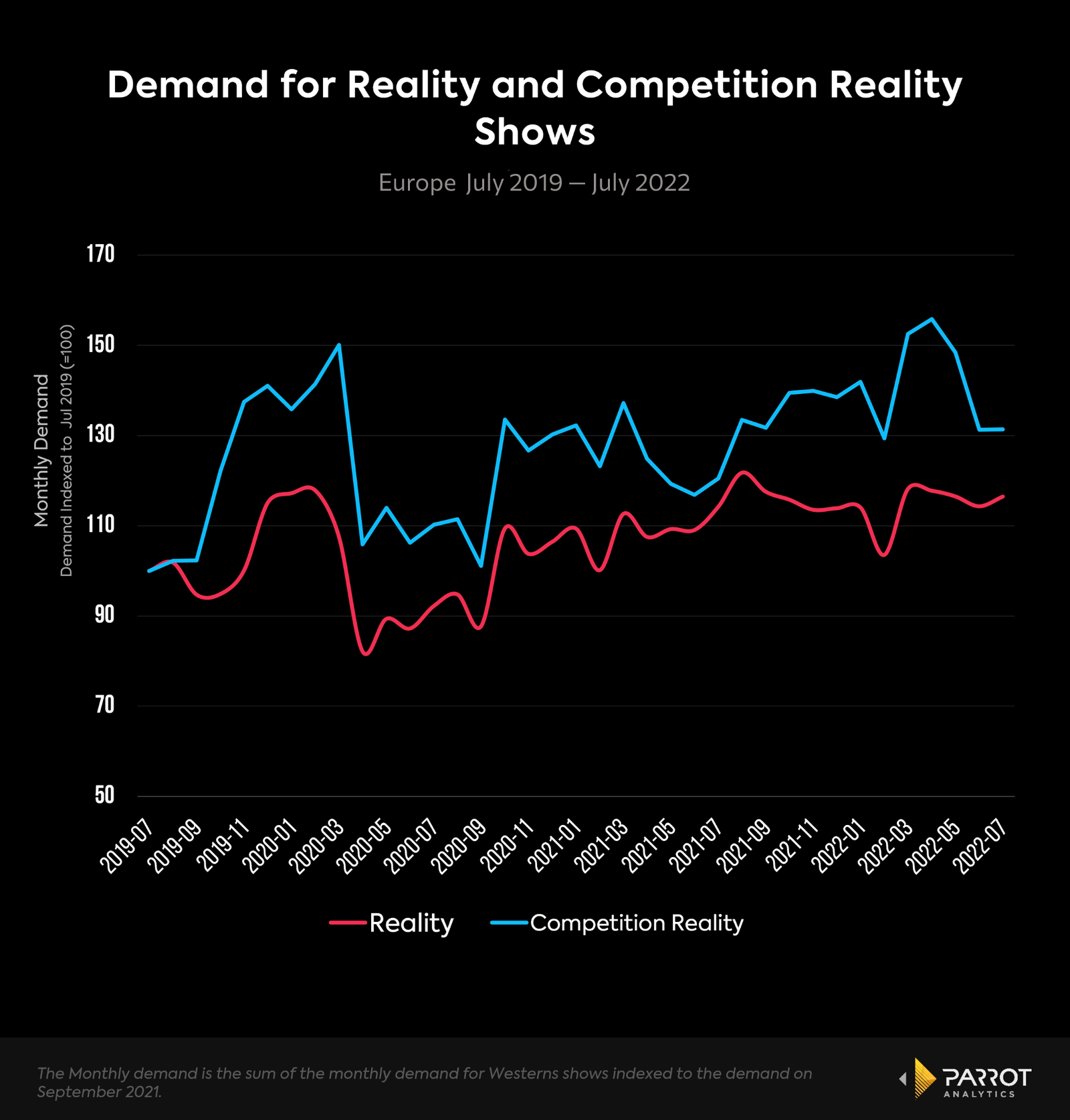 Being able to pinpoint what works best for each individual country is key to making the right investment. As mentioned earlier, a talent like Gordon Ramsay and the collection of titles people associate him with, can help lead to stronger acquisition choices. In Greece, there is strong demand for Ramsay and MasterChef. Master Chef Greece is the third most in-demand reality and competition show in the country with 3.16x the average demand of all other series in the categories. It is the most in-demand unscripted cooking show in the region, too. There is strong content affinity — meaning the overlap in demand for Master Chef and other series — with Ramsay’s other work, suggesting that acquiring other titles could jump on growing demand trends and find a loyal audience in Greece.

It’s abundantly clear that demand for unscripted programming, especially in the competitive and dating categories, is only going to continue to increase. Making moves for original programming in the space is smart, especially honing in on what the audience demographics dictate they want to see more of going forward. Still, there’s no big need to reinvent the wheel. What’s clear is that localized versions of strong performing series can already work in establishing an audience base across different regions, as can targeting back catalogs from some key talent. The unscripted game is one of playing smart, and finding whitespace opportunity within a crowded field can come from seeing what’s ripe for adaptation.