Demand for Jurassic movies after the release of Jurassic World: Dominion

While it has received mixed reviews from critics, Jurassic World: Dominion managed to reach $600 million at the global box office in the second weekend after its release last month. The outstanding level of demand around the world also reflects this. The film, which was directed by Steven Spielberg, starred not only Chris Pratt and Bryce Dallas Howard, but also Jeff Goldblum, Sam Neill, and Laura Dern, who had starred in the first films - a factor that could perhaps have drawn older generations to the theatre. This possible influence, as well as the success of the previous films, made it understandable the projections for Jurassic World: Dominion were on the higher side. This article will cover the demand for the newest instalment of the Jurassic World franchise, as well as the rise in demand for its previous films.

Jurassic World: Dominion was the third and final instalment of the Jurassic World trilogy and, while there might be further exploration into other stories of the Jurassic universe, it is interesting to see how the levels of demand have changed in the month after this film’s release. The chart below shows the demand for Jurassic World: Dominion in the month since its release on June 9th this year. Over the last thirty days, the film reached a peak of 60.4 times more demand than the average film worldwide, while averaging at 28.1 times more global demand than the average film. 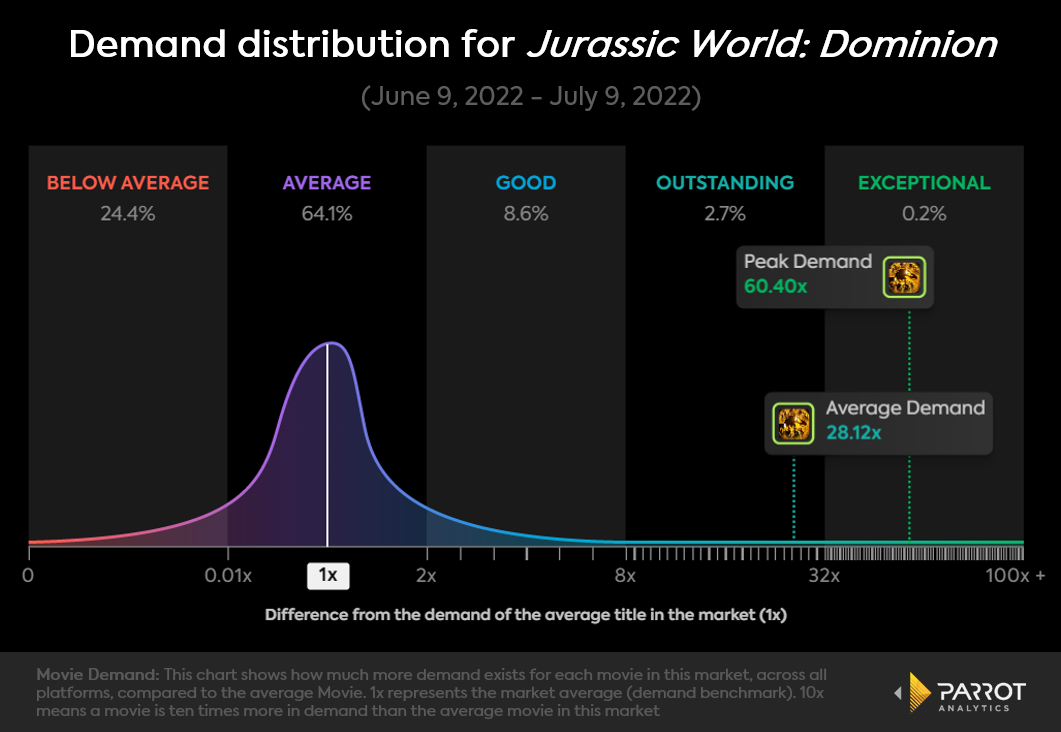 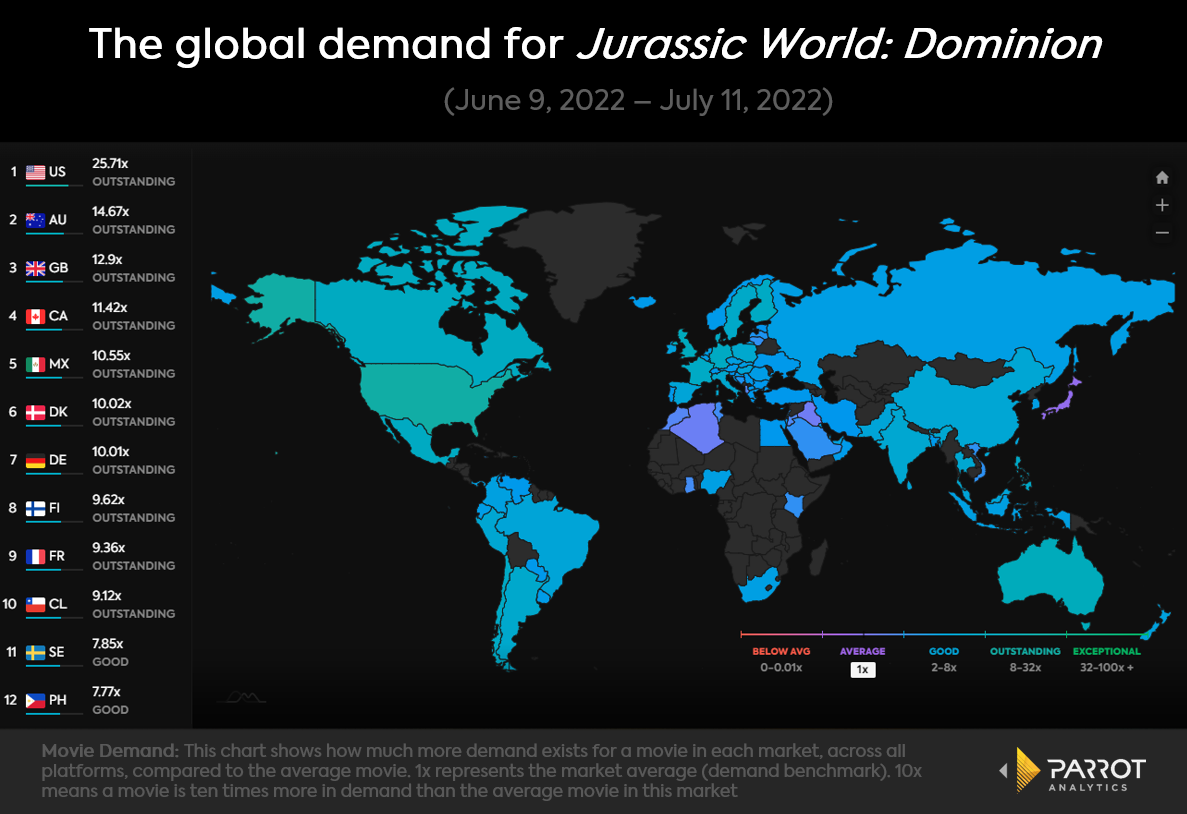 Rise in demand for other films

Since the release of its latest film, the Jurassic Park franchise has seen a rise in demand for its previous films. One instalment in particular, Jurassic World: Fallen Kingdom, had a major spike in demand shortly after the release of Dominion, reaching 63.7 times more demand than the average film worldwide on June 11. This was an exceptional level for a film that was released almost four years ago. 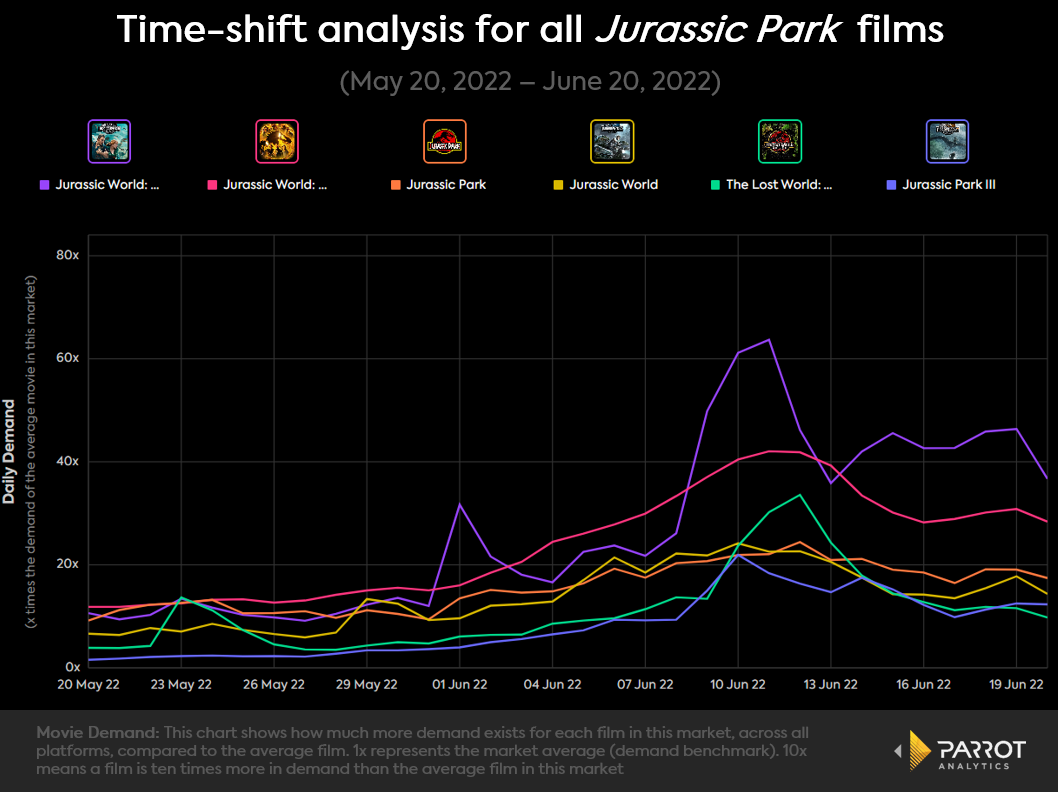 The first Jurassic Park film, which was released in 1993, saw a rise in global demand as well. While it was more of a gradual shift instead of a big spike, the film shifted from 9.2 times more global demand than the average film to almost 25 times more global demand than the average film. This rise in demand, as well as that of the other films on the below chart, could have partially been influenced by the newest film’s casting, which included Jeff Goldblum and a number of other actors from the first films. In saying this, the rise in demand across all films within this franchise since the release of its newest instalment is a trend that can also be seen in other films. After the release of Top Gun: Maverick in May this year, for instance, the first Top Gun rose to over 60 times more demand than the average film worldwide. This was a spectacular achievement for a film that was released almost four decades ago.

Well-known to many generations, the Jurassic Park franchise has a lot going for it when it comes to potential for demand. While it had not perhaps drastically exceeded the projections and hopes of critics, Jurassic World: Dominion still brought in a high level of demand. Moreover, there was a significant rise in demand for the previous Jurassic Park and Jurassic World films since the release of this newest film - particularly that of the 2018 Jurassic World: Fallen Kingdom. This goes to show that reviews from critics and levels of box office success do not necessarily influence or dictate demand for a film. It's how often it is pirated, videos of it online, and even social media presence, however that can make for an interesting shift when it comes to level of demand.