Documentary and Science: How do titles perform in the U.S. and WW?

Whether it’s for a curious child who’s eager to explore the world or a parent with a full-time job, science documentaries are an appealing source of entertainment. Surveys have tried to capture and understand the wide-ranging demographics that such content caters to. 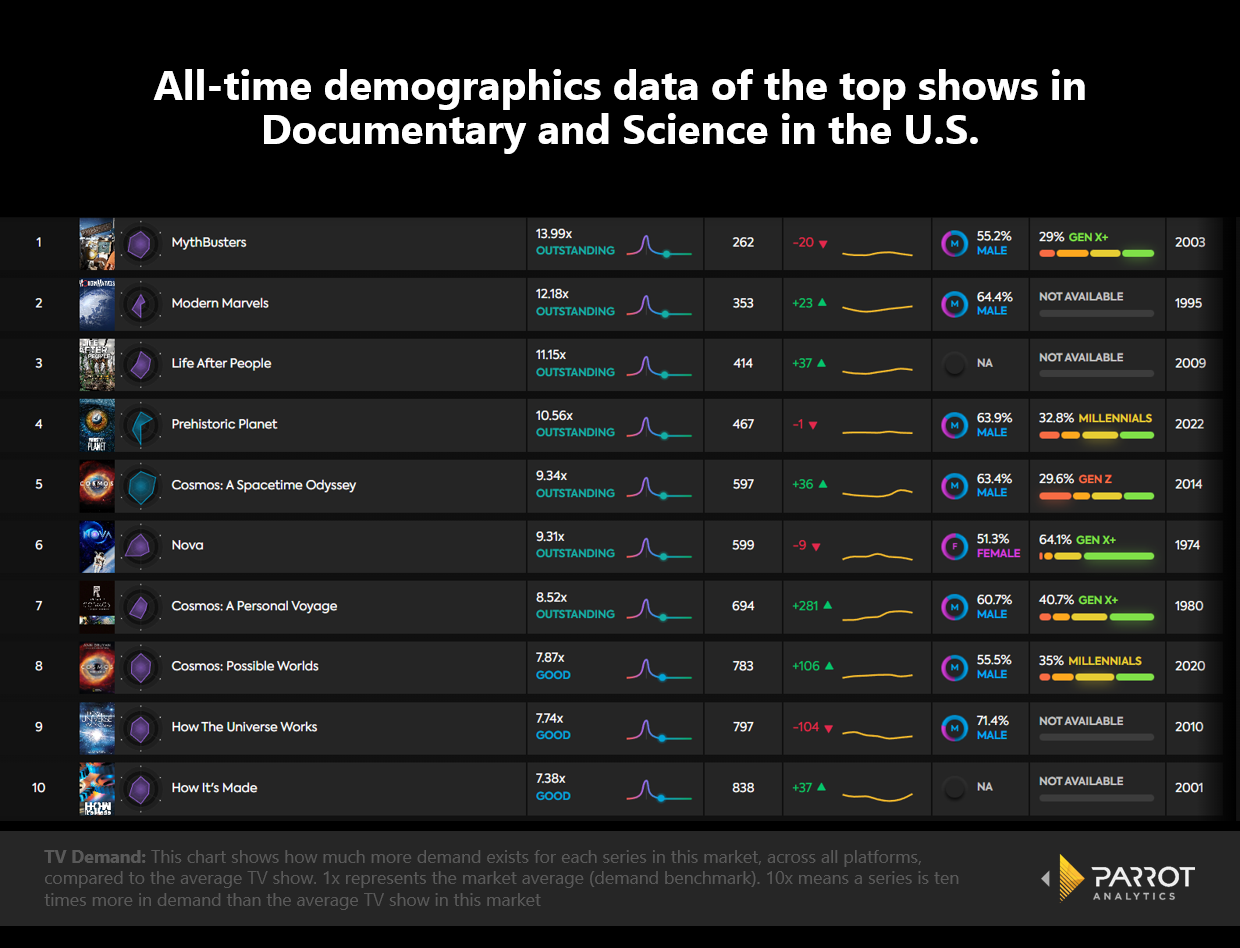 According to Parrot Analytics demographics data, shows in the Documentary and Science category Like Mythbusters, Cosmos: Possible Worlds, and Cosmos: A Personal Voyage all have at least a 40% female audience, while a show like PBS’ Nova has a majority part of the audience as female. Meanwhile, shows like Cosmos: A Space Odyssey demonstrate well-distributed popularity among different age groups.

Following the data, it’s safe to say science-based docu-series can be fun for anyone.

After hitting the market at the beginning of 2022 Apple TV+’s original documentary series Prehistoric Planet is making big waves. The show is the only 2022 debut to make it into the Top 10 most in-demand titles in the category of Documentary and Science, both in the American market and worldwide.

In this article, we will take a close look at the show’s performance in various metrics, in the U.S. and worldwide markets, comparing it to different in the same genre.

Performance in the U.S. 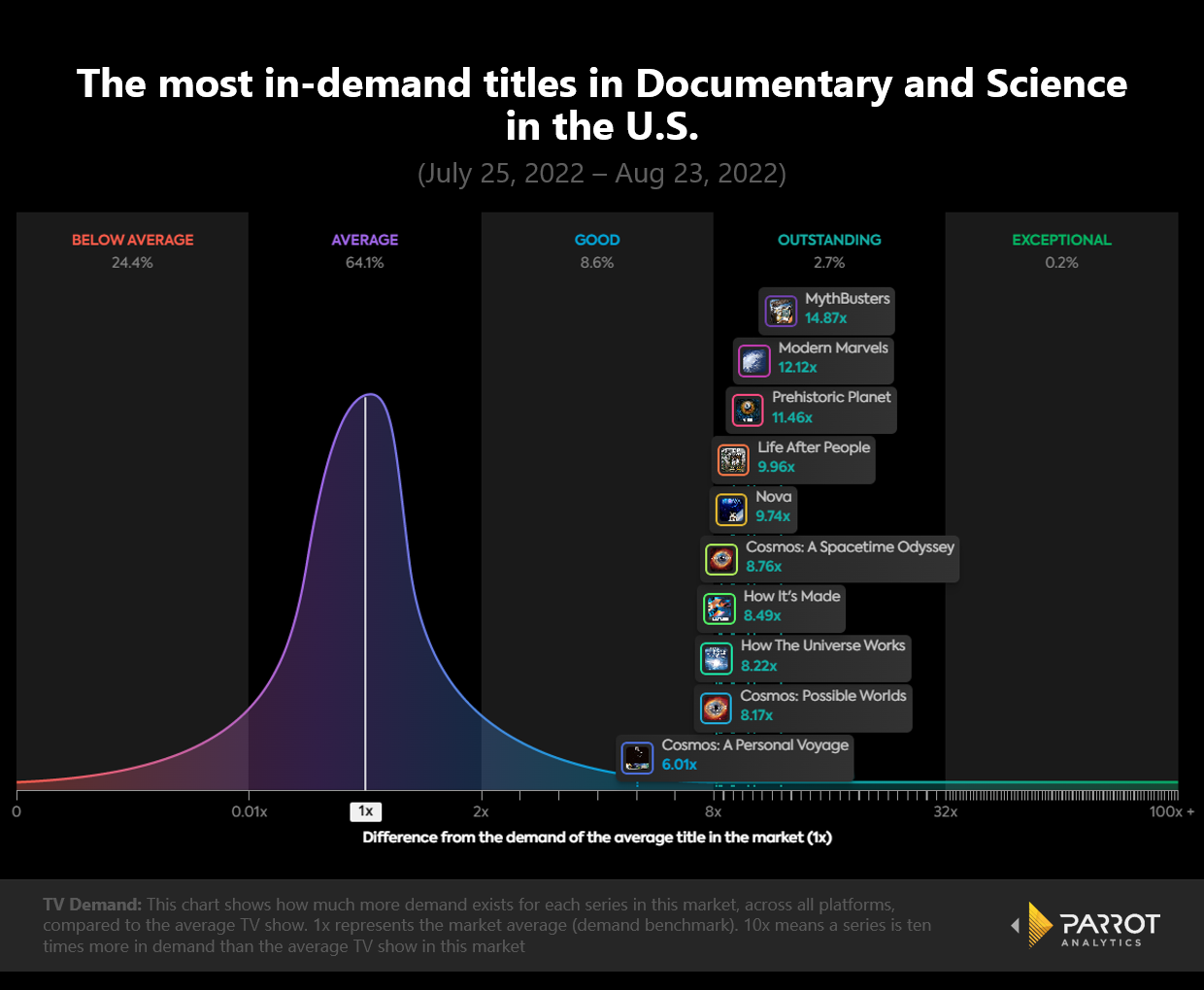 In the United States, in the past 30 days, Prehistoric Planet has garnered 11.4x the demand average, making it the third most popular show in the category. Discovery Channel’s Mythbusters and H2’s Modern Marvels came ahead, with 14.8x and 12.1x the demand average respectively. 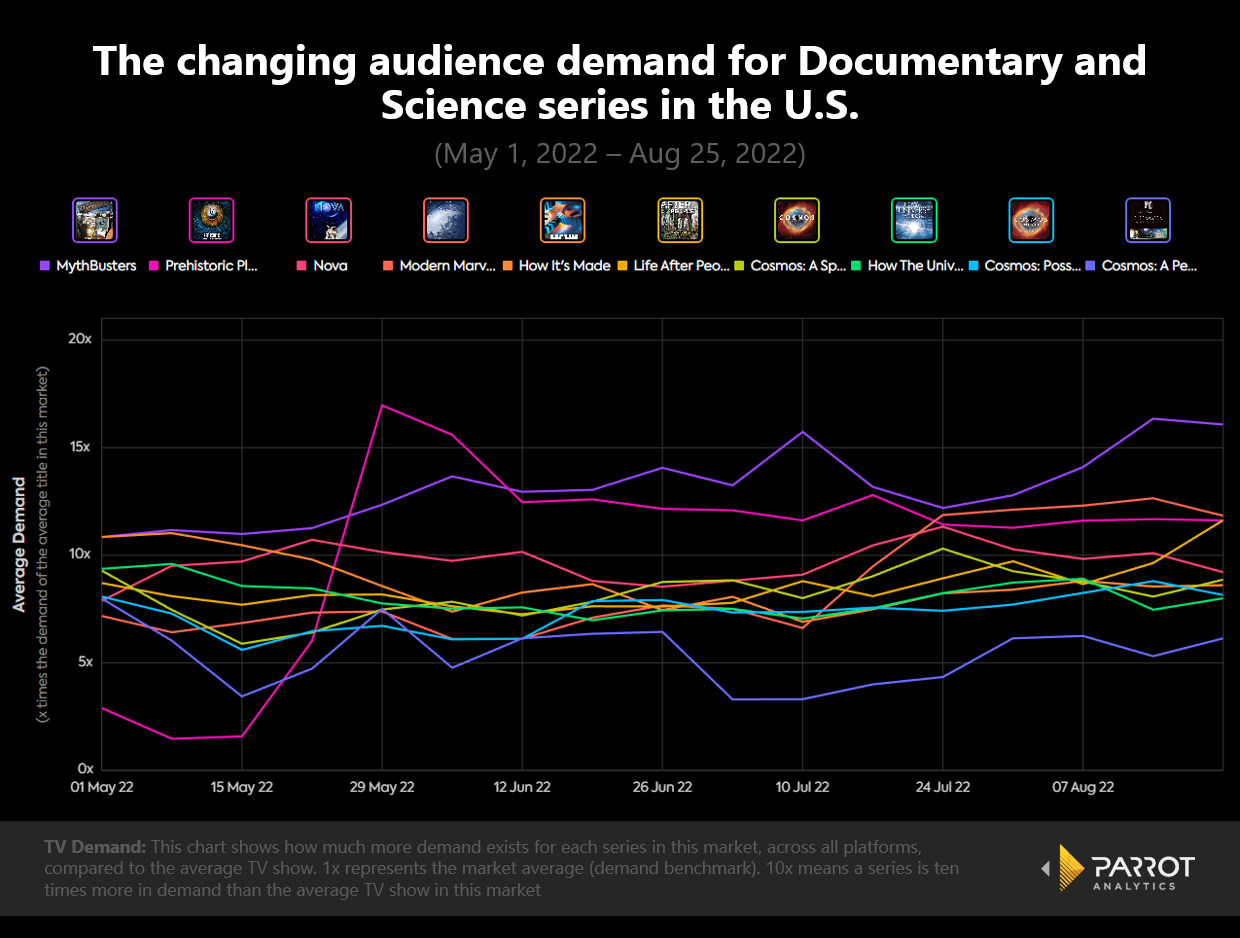 To have a better understanding of the performance of these shows, we can look at the time-series chart. According to it, we can see that the demand for Prehistoric Planet skyrocketed around the time it launched, on May 23rd this year. The demand peaked on May 29th at 16.9x the demand average.

After that, the show remained the most in-demand title on the chart for a while, until it was overtaken by MythBusters on June 12th. Eventually, on July 24th, Modern Marvels became the second most in-demand title with 11.8x the demand average. Since then, the demand for MythBusters has gradually increased, peaking at 16.3x the average on August 14th. 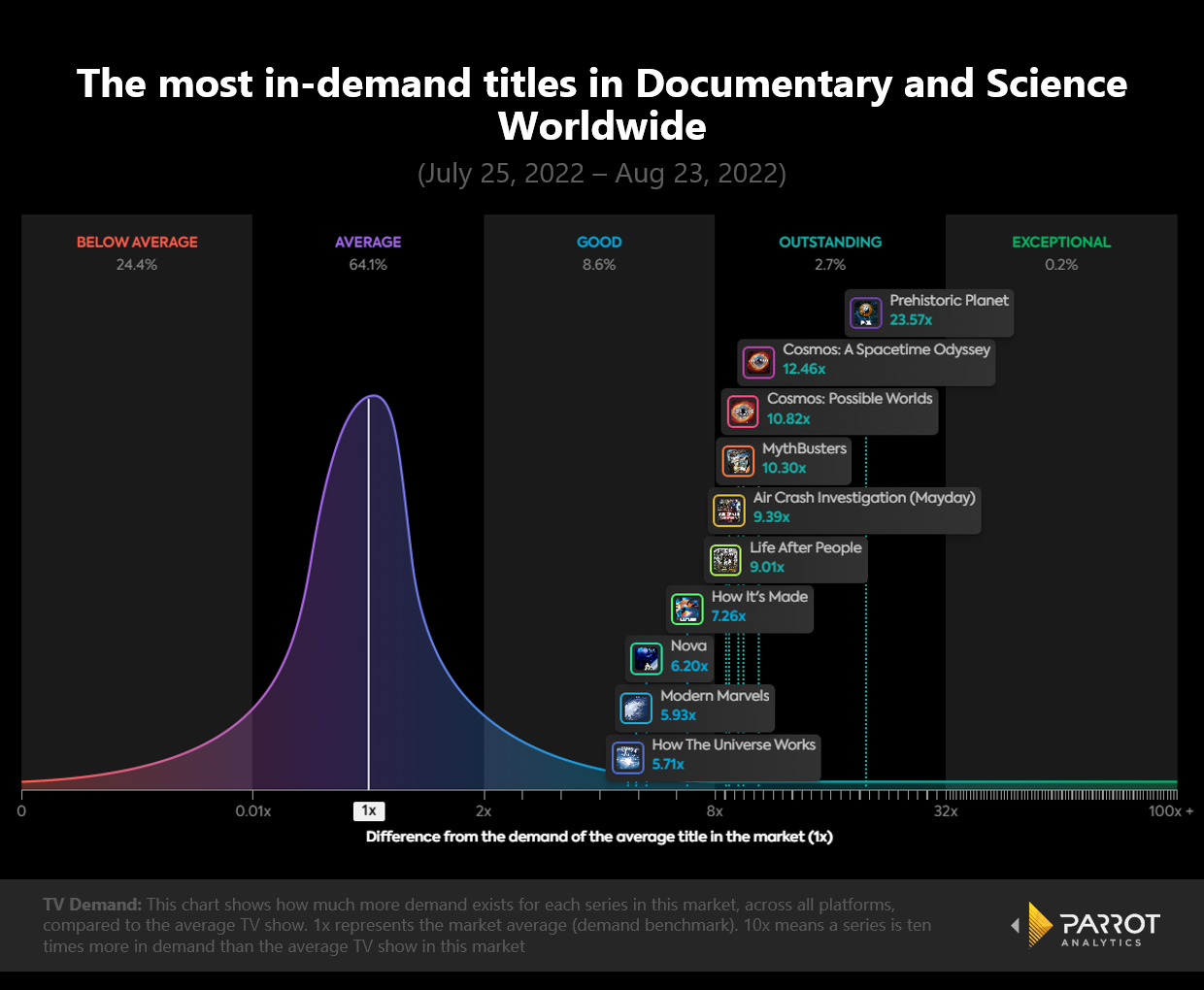 Worldwide, the most in-demand titles within the Documentary and Science category are mostly the same as in the U.S, with some rank shifts. For instance, the show that comes in first here is Apple TV+’s Prehistoric Planet. The debut docu-series recorded 23.5x the demand average from July 25th to August 23rd.

This is almost double the demand rate for the next title on the chart, Cosmos: a Spacetime Odyssey, which recorded 12.4x the average in the same period. The follow-up series, Cosmos: Possible Worlds, came in third place, recording 10.8x the demand average.

In tandem, Discovery Channel’s How It’s Made maintains the same rank at 7th place, with 7.2x the demand average.

Meanwhile, History’s Life After People, PBS’ Nova, and Discovery Channel’s How The Universe Works all came in a few spots lower than in the American market. For instance, Nova, which ranked 5th in the U.S. chart comes in 8th place here, with 6.2x the demand average. Similarly, Life After People went from 4th to 6th place on this chart, recording 9x the demand average.

The shift in ranking is mainly caused by Discovery Channel’s Air Crash Investigation (Mayday), which comes in 5th place here and records 9.3x the demand average. The title is not present in the U.S chart, where instead there’s Cosmos: A Personal Voyage, the original instalment of the Cosmos franchise presented by Carl Sagan, ranking in 10th place with 6x the demand average. 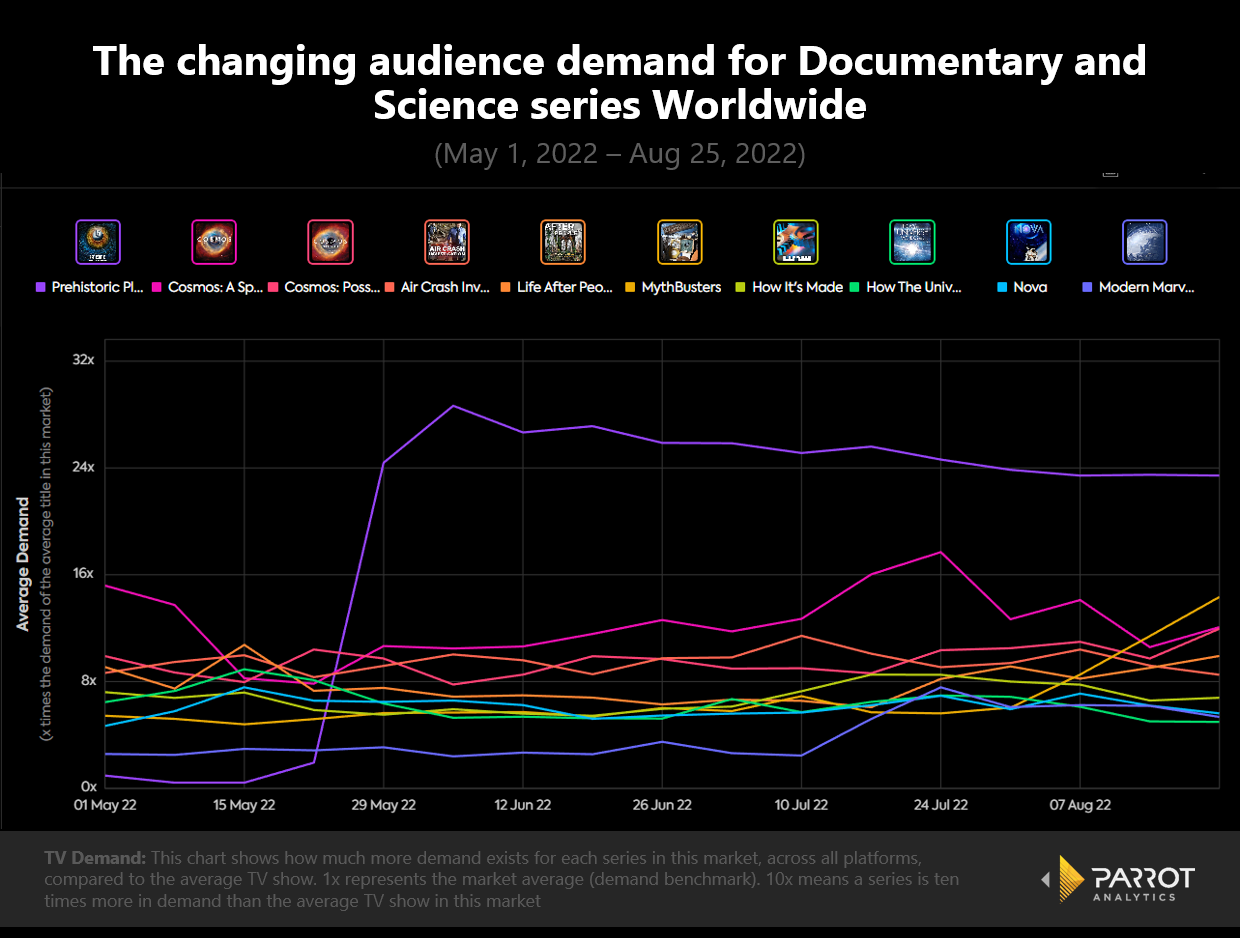 The time-series chart gives us a detailed glimpse of the performance of these shows. On it, we find that the demand for Prehistoric Planet increased dramatically on the week it debuted, jumping from 1.9x to 24.3x the demand average. It subsequently peaked in demand the following week, with 28.6x the demand average.

Unlike in the U.S, the demand for Prehistoric Planet has remained at the top of the chart since its launch, with the second most popular title being Cosmos: A Spacetime Odyssey. The demand for the Fox original has remained high, dipping only for a couple of weeks in mid-May. Furthermore, the show registered a peak demand of 17.7x the average on July 24th.

We can compare the performance in different metrics of all titles by checking The Pulse chart. 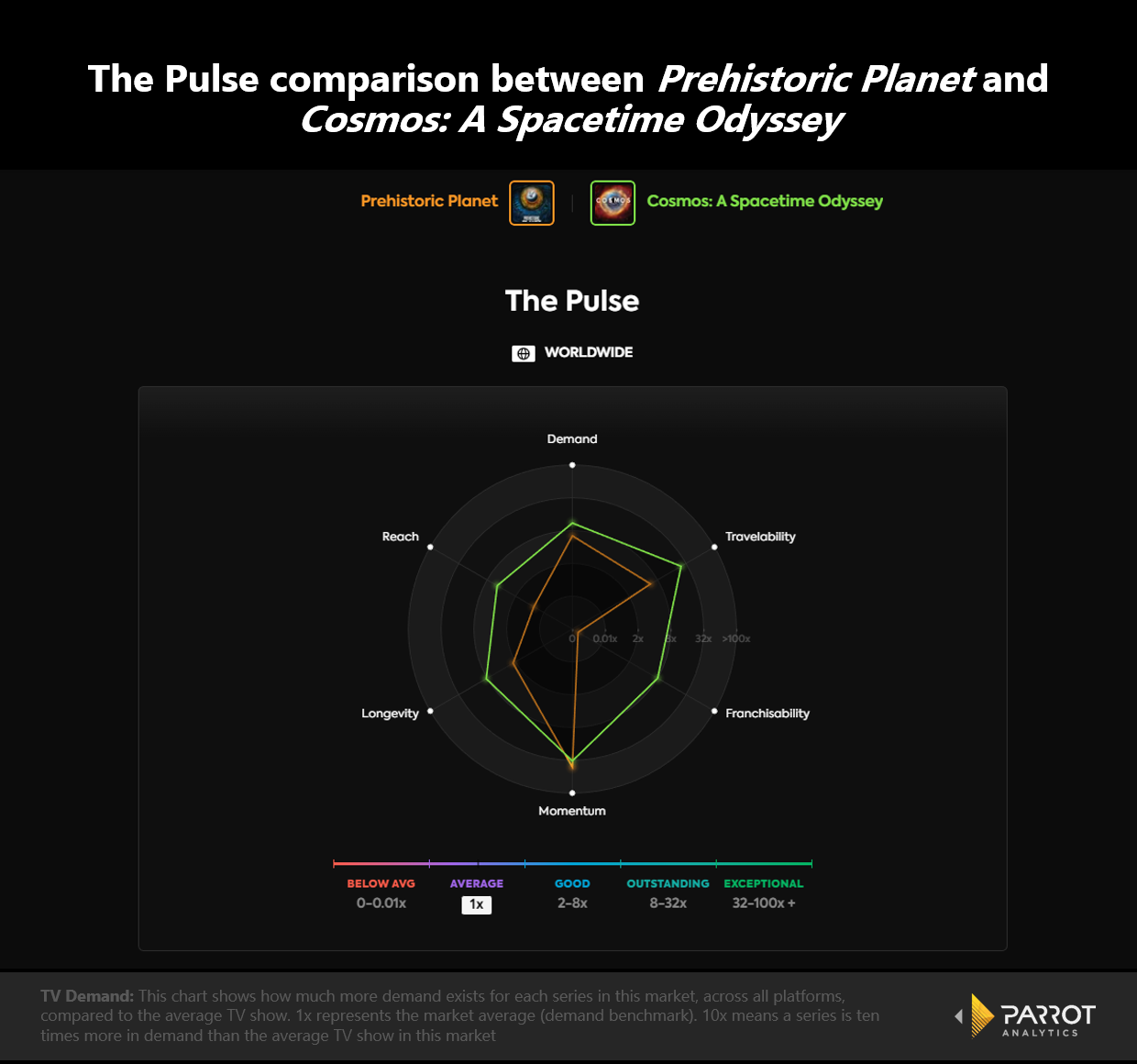 The data for the chart is from a year, therefore, in a direct comparison of the two most in-demand titles worldwide, we find that Cosmos: A Spacetime Odyssey mostly outperforms Prehistoric Planet. 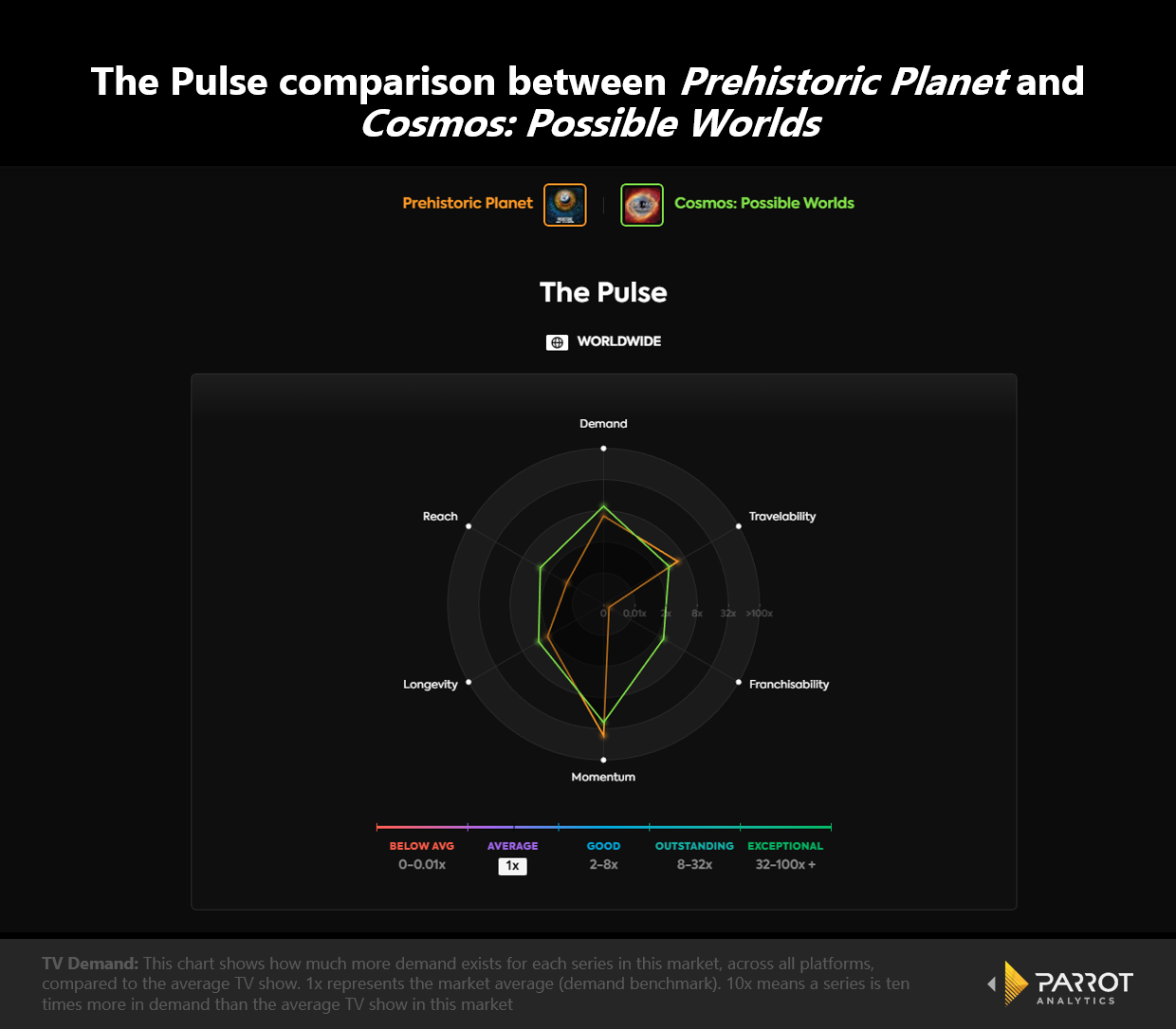 A closer comparison can be done between Prehistoric Planet and National Geographic’s Cosmos: Possible Worlds, which was released in 2020. The Apple TV+ debut outperforms Cosmos in Momentum and Travelability, recording 46.7x and 6.4x the average, respectively. In tandem, the National Geographic series performs especially well in Reach and Franchisability, recording 4x and 3.3x the average in these metrics, respectively.

Additionally, the time-shift chart allows us to compare the performance of the shows’ first seasons. 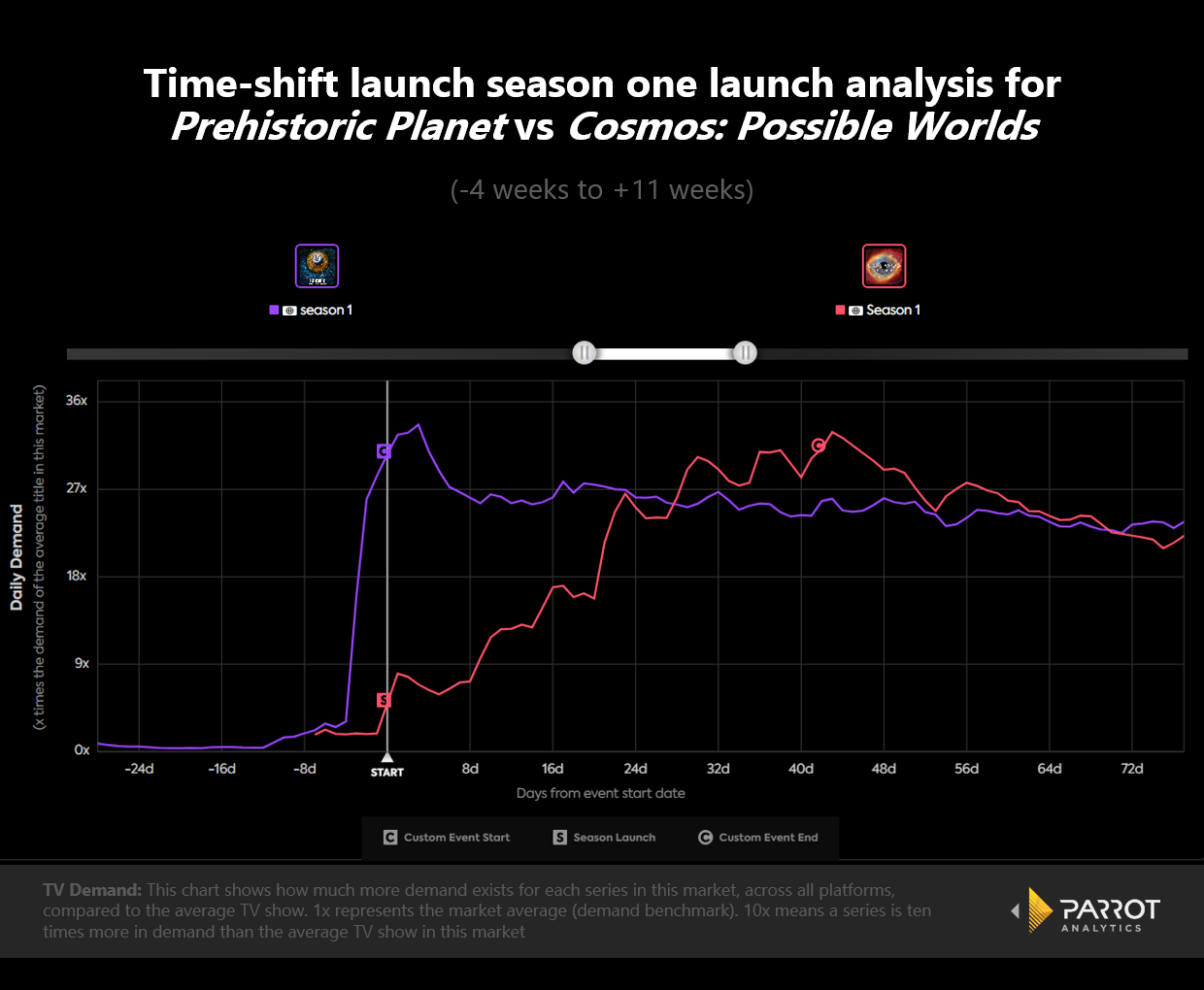 When looking at it, we find that demand for Cosmos: Possible Worlds developed much more gradually than for Prehistoric Planet. The 2022 docu-series registered its peak demand of 33.6x the average three days after the show’s release. Meanwhile, Cosmos’ demand peak only came 43 days after its launch, when it recorded 32.8x the demand average.

Interestingly, although Prehistoric Planet’s peak was a lot more front-loaded in comparison, it maintained the audience’s interest over time, as the chart shows a gradual decrease in demand for it. On the other hand, demand for Cosmos: Possible Worlds appears to have fallen slightly more quickly after its peak. Therefore, at 72 days past the launch date, the National Geographic original had 22.2x the demand average, while Prehistoric Planet had 23.6x the average.