Technology has certainly had an impact on the movie and TV industry. Now more than ever, it's easy to watch content from around the world. Last year, the Korean show Squid Game beat all records of viewership on Netflix.

With this in mind, we'd like to ask: Which shows produced outside of the U.S that have the highest Momentum score? And how are they performing generally? Let's find out.

What shows have the biggest Momentum?

The top two titles with the highest Momentum score that were not produced in the United States are Tokyo Mx’s Overlord, a Japanese production, and Netflix’s Cyberpunk Edgerunners, a Japanese-Polish production.

While Overlord has been around since 2015, Cyberpunk Edgerunners was just released this September. However, Overlord’s had a recently released season, airing from July to September of this year, which explains the series’ score in the metric.

Both titles score exceptionally well in Momentum, with the Tokyo Mx original recording 55.4x the demand average and Cyberpunk Edgerunners 54.1x the average. 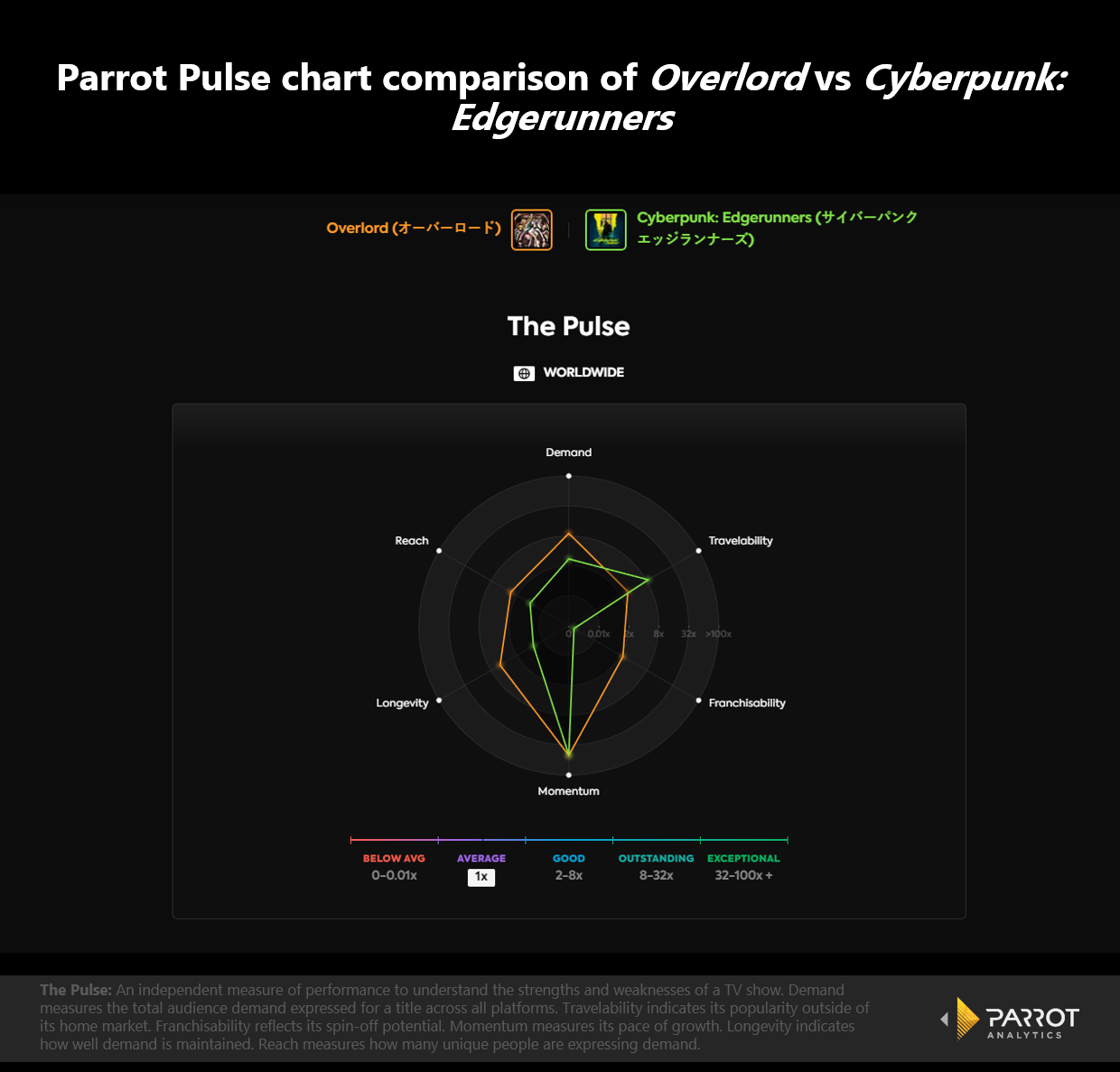 Despite the similar score in Momentum, the Parrot Pulse chart for the shows illustrates a different dynamic in their general performance. Overlord excels Cyberpunk in all metrics except for Travelabillity. This could be because Cyberpunk Edgerunners is originally from Netflix, where the platform has made it available in over 30 countries and provided subtitles for it in more than three dozen languages.

Although the accumulated Momentum performance of Overlord has been greater than that for Cyberpunk Edgerunners, this doesn’t necessarily translate into a better Demand performance for the show’s latest season. 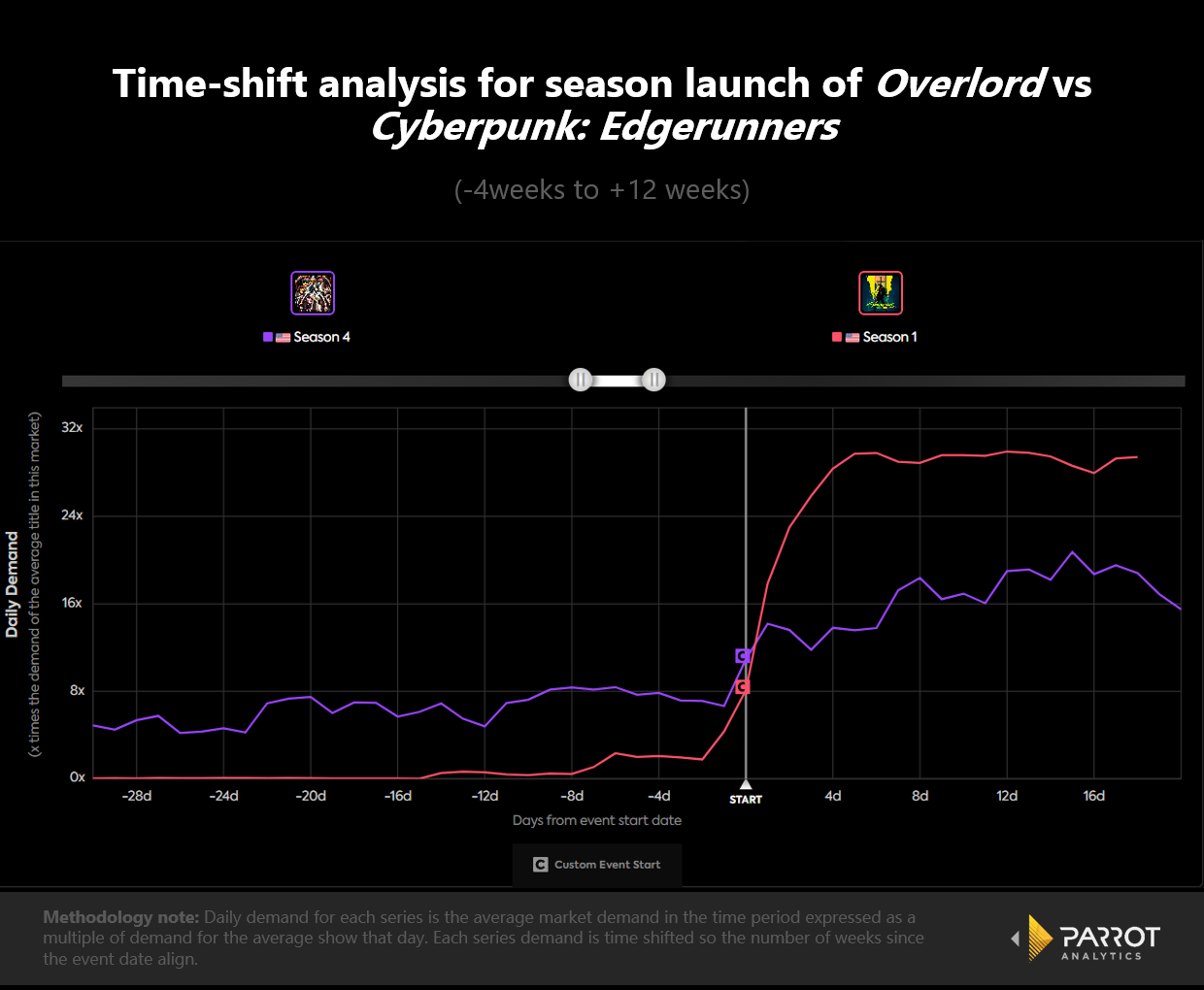 Looking at the time-shift chart, which reflects the demand for both shows’ most recent season, we find that the debut season of the Netflix series has overall outperformed Overlord’s fourth season. While the Tokyo Mx title peaked at 20x, the Cyberpunk Edgerunners peaked at 30x the demand average soon after its launch and consistently remained above 25x the average in the weeks after. 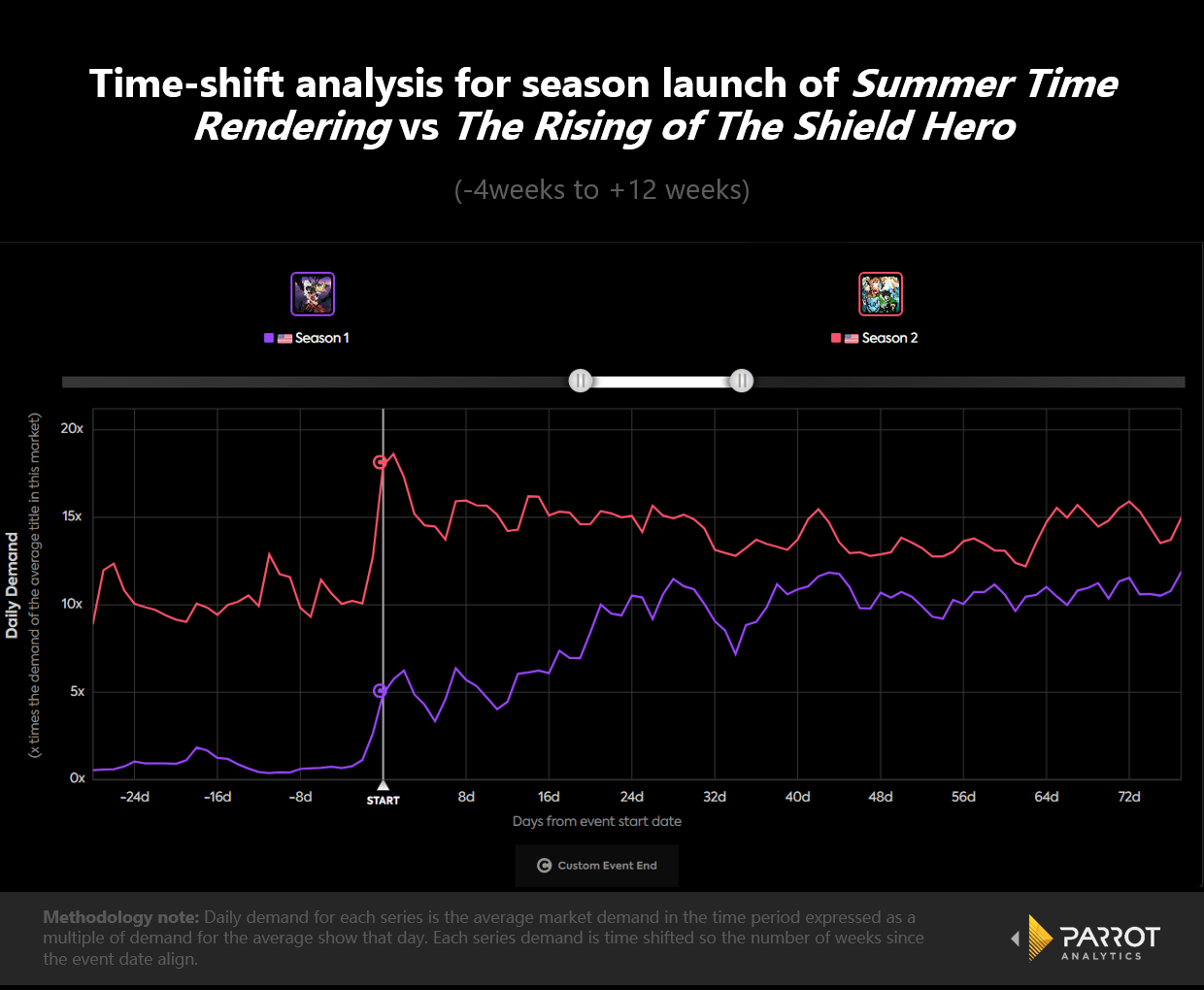 If we compare the performance of the latest seasons of both titles, we find that the sophomore series outperformed the Disney+ show in demand during the first days after its launch. The Rising of The Shield Hero’s season two launch recorded 17.9x the demand average, while Summer Time Rendering’s debut had 4.9x the demand average. However, this gap gradually decreased over the weeks, and the demand for Disney+ show eventually peaked at 11.8x the average. 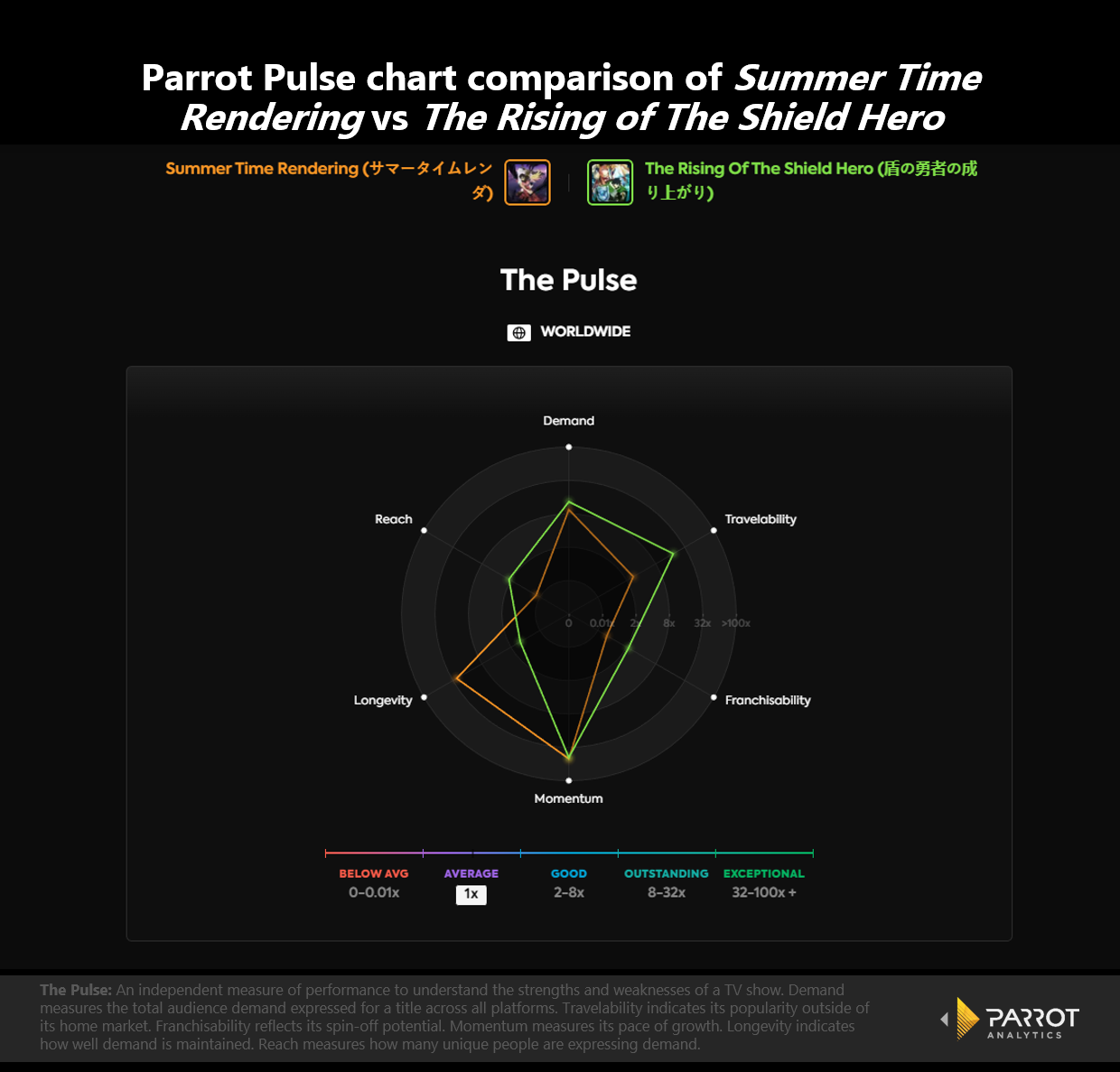 Furthermore, looking at the Pulse chart, we find that there is a balance to the performance of the shows in different metrics. Both score high in Momentum, with Summer Time Rendering recording 54.4x the demand average and AT-x series recording 52.2x the average. The shows also record a similar score in Demand, with Summer Time Rendering at 10.8x the average and The Rising of The Shield Hero at 16.4x.

The Tokyo Mx original is available in the United States on the streaming platform Crunchyroll. It has earned 22.5x the demand average in Travelability, compared to Summer Time Rendering’s 3.2x the average. Similarly, the series demonstrates better Reach and Franchisability. On the other hand, Summer Time Rendering registers much better Longevity than its two-season counterpart. The 2022 debut records 29.5x the demand average in this metric, while The Rising of The Shield Hero has 1.3x the average.

Next up on the list of series with the highest Momentum are two British shows, ITV2’s Love Island UK and Apple TV+’s Slow Horses. While the reality show aired its eighth season this summer, the Apple TV+ original is a newcomer to the audience. Both shows receive an exceptional score in Momentum: Love Island records 53.3x the demand average, while the Apple TV+ original has 51.7x. 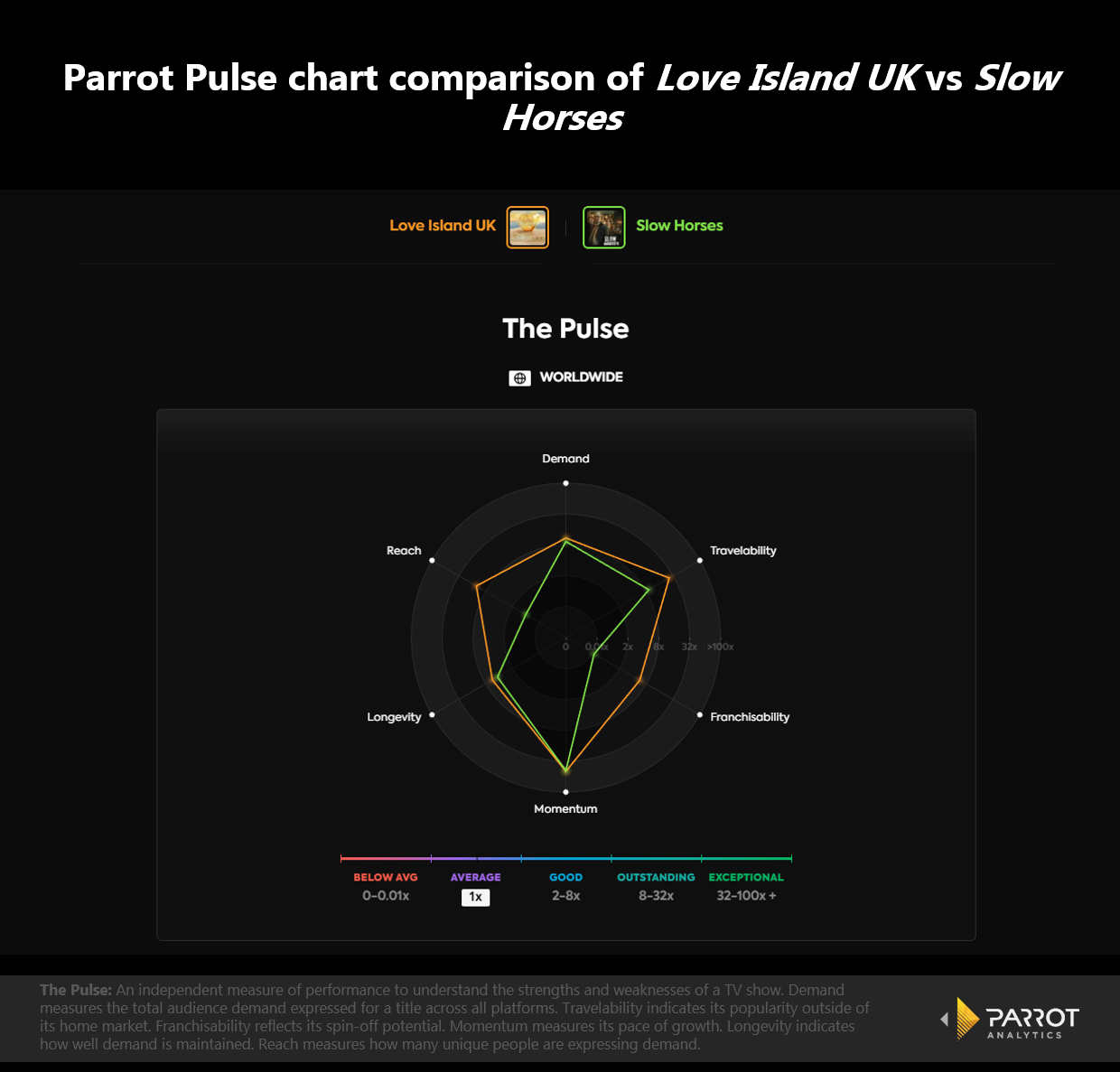 Furthermore, looking at their Parrot Pulse comparison, we find that, while the veteran reality show outperforms in all categories, Slow Horses is competitive in some metrics. For instance, there is a big gap in performance in Reach and Frachisability metrics. In the Reach metric,  the reality show received 16.2x the demand average, while Slow Horses recorded 1x. In the Frachisability metric, Love Island received 6.5x the demand average, compared to 0.1x the average for Apple TV+’s title. The reality-show’s amazing Franchisability has already yielded dozens of spinoffs, with successful versions in countries like Australia, Canada, and Sweden.

The next four foreign titles with the most Momentum are Netflix’s La Casa de Papel, NHK’s Attack on Titan, and two South Korean productions: TvN’s Twenty-Five Twenty-One, and SBS TV’s Our Beloved Summer. 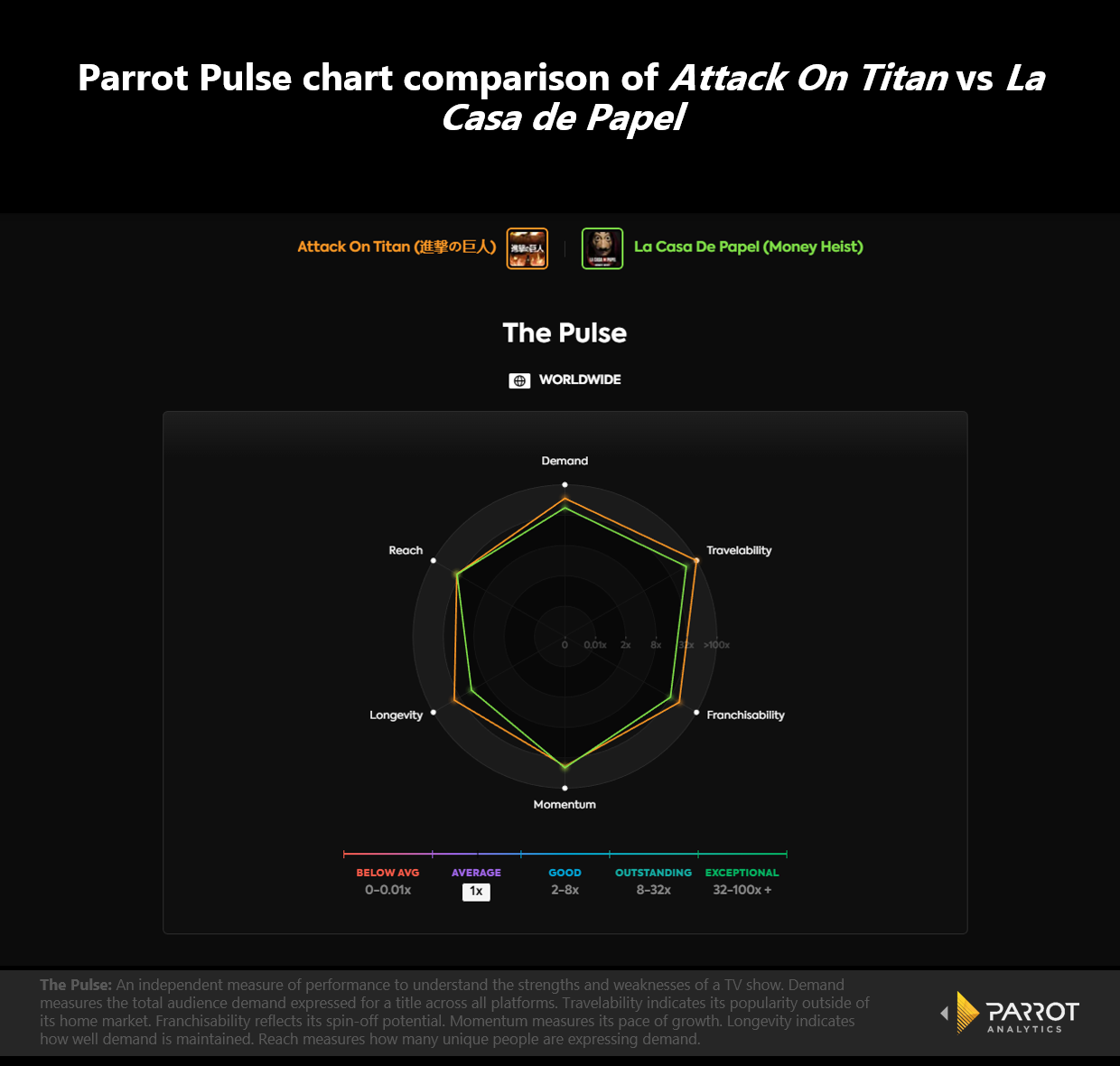 Taking a look at the chart, we find that the shows have a similar overall performance, with Attack On Titan coming slightly ahead in most metrics. In Demand, Attack On Titan records 69.9x, while La Casa de Papel records 48.4x the average.

On the other hand, the shows register very close scores in Reach, where Attack On Titan earns 39.2x the average series, and La Casa de Papel earns 38.5x the average.

Finally, we turn to the South Korean titles. Twenty-Five Twenty-One is another 2022 debut, originally broadcast on TvN, while Our Beloved Summer is a 2021 series, originally on SBS TV, although both are currently available on Netflix. 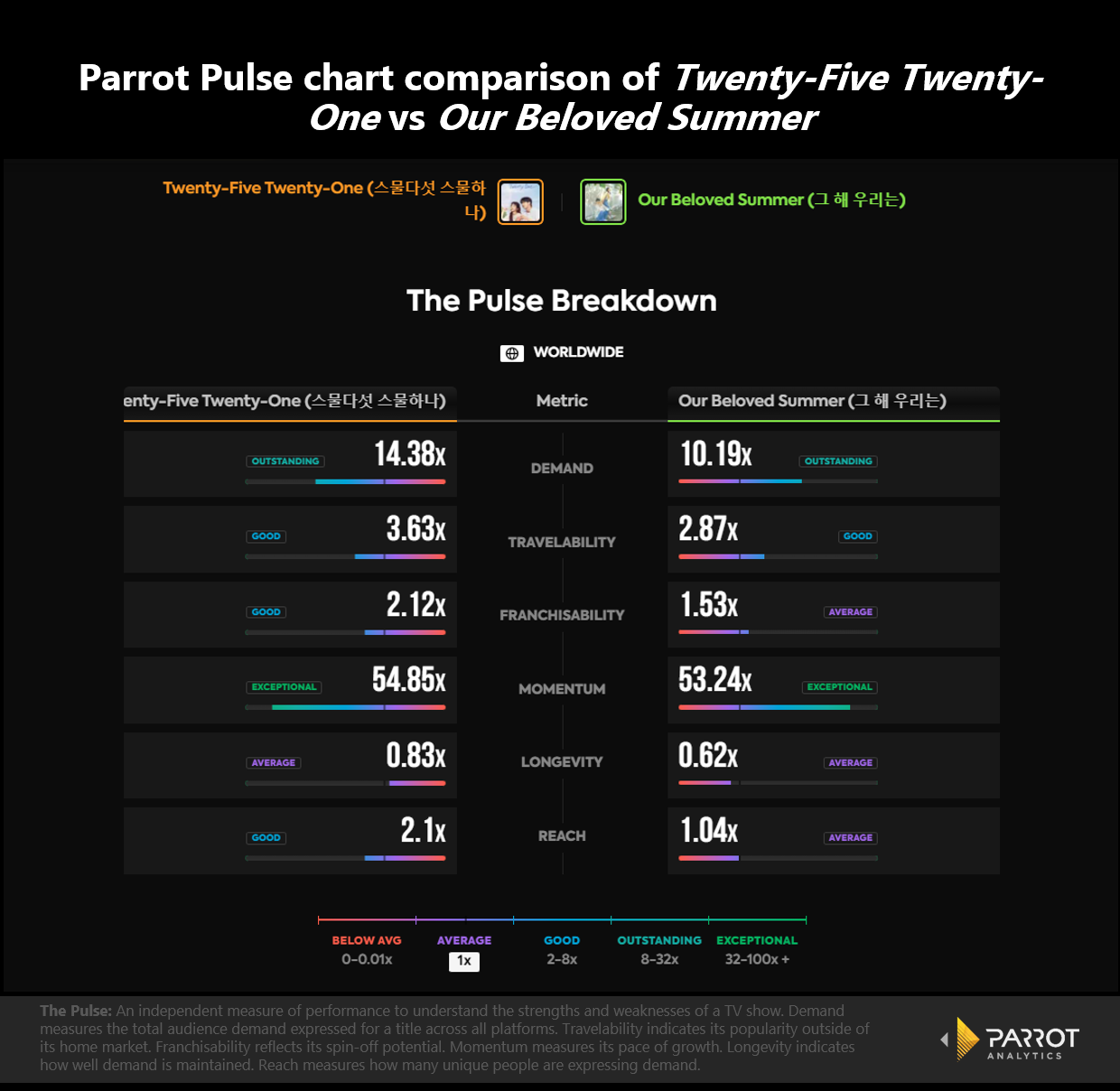 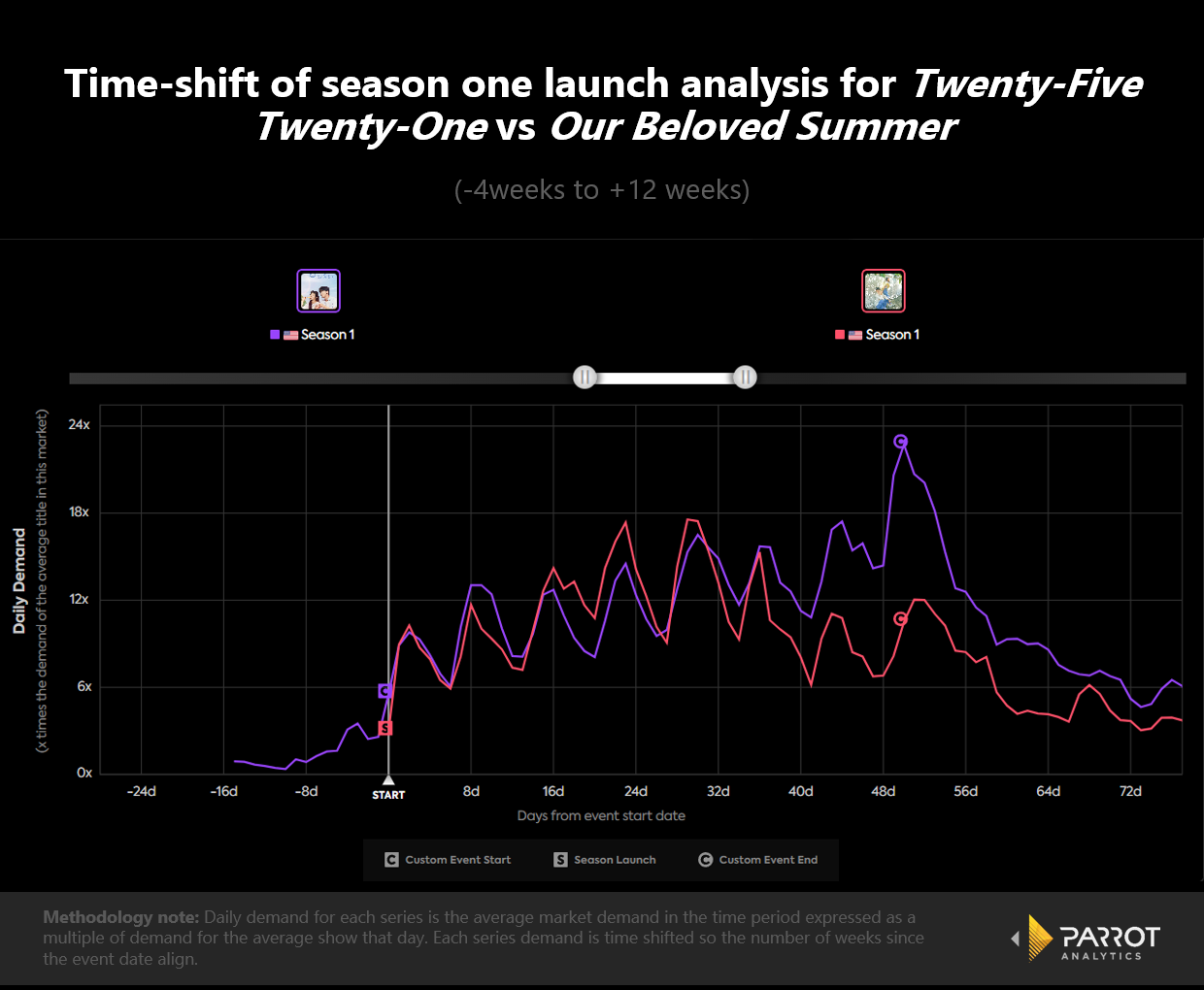 The time-shift chart comparing the performance of both shows’ first season in the days after its launch bears out how similar the demand for the series has been. The graph shows that both titles maintained a similar amount of demand in the first month of the season’s launch, only deviating at around 50 days after launch, when demand for Twenty-Five Twenty-One peaks at 27x the average, only to come back down again close to the demand for Our Beloved Summer.

Overall, foreign shows with a high Momentum score demonstrate a degree of variety in origin and language, and it seems like being available on a global streaming platform, such as Netflix or Crunchyroll, can be the key to the success of such shows.