When people fall in love with a series, it’s natural that they will look for more of that same content. This is why it’s a sensible economic strategy to invest in the franchise of a successful production. Be it a movie, a prequel, or a sequel TV series, the audience will likely be interested to see more of what they got.

Over the years, a good number of successful titles, such as Better Call Saul, Fear The Walking Dead, and The CW’s Arrowverse has laid out a blueprint that can inspire the production of a new wave of franchises.

In this article, we will explore the potential Franchisability of shows that have not yet released spinoffs by studying their performance in different metrics. We will be looking at shows that have confirmed upcoming spinoffs, as well as shows still haven’t announced anything.

Shows that have confirmed spinoffs

Among the shows with high scores in Franchisability, Stranger Things, Peaky Blinders, The Good Doctor are some of the ones that have announced upcoming spinoffs. 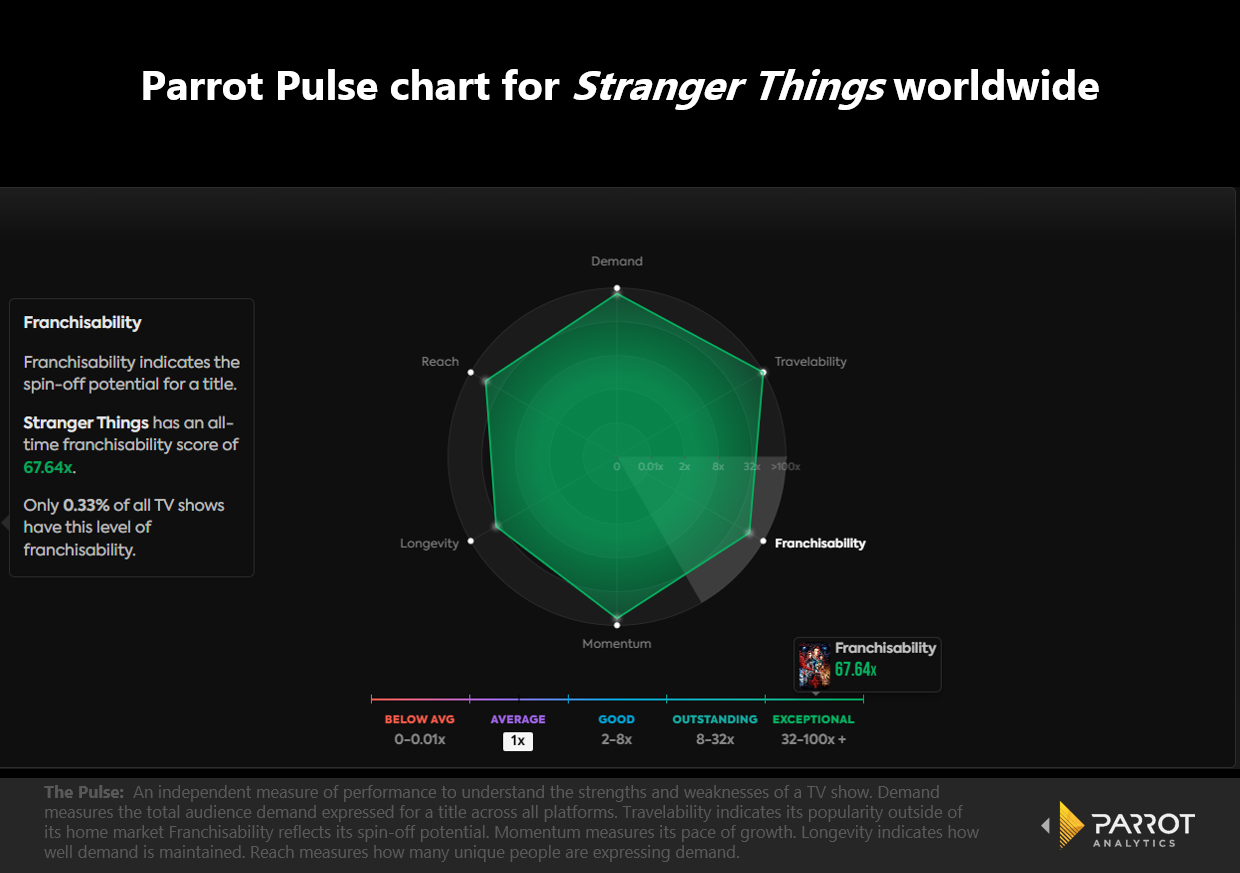 The creators of the Netflix original Stranger Things announced after the ending of the show in July that they are working on an offshoot. The fast decision to develop a spinoff is definitely supported by the show’s Franchisability potential. According to Parrot Analytics data, it records 67.5x the demand average in the Franchisability metric. 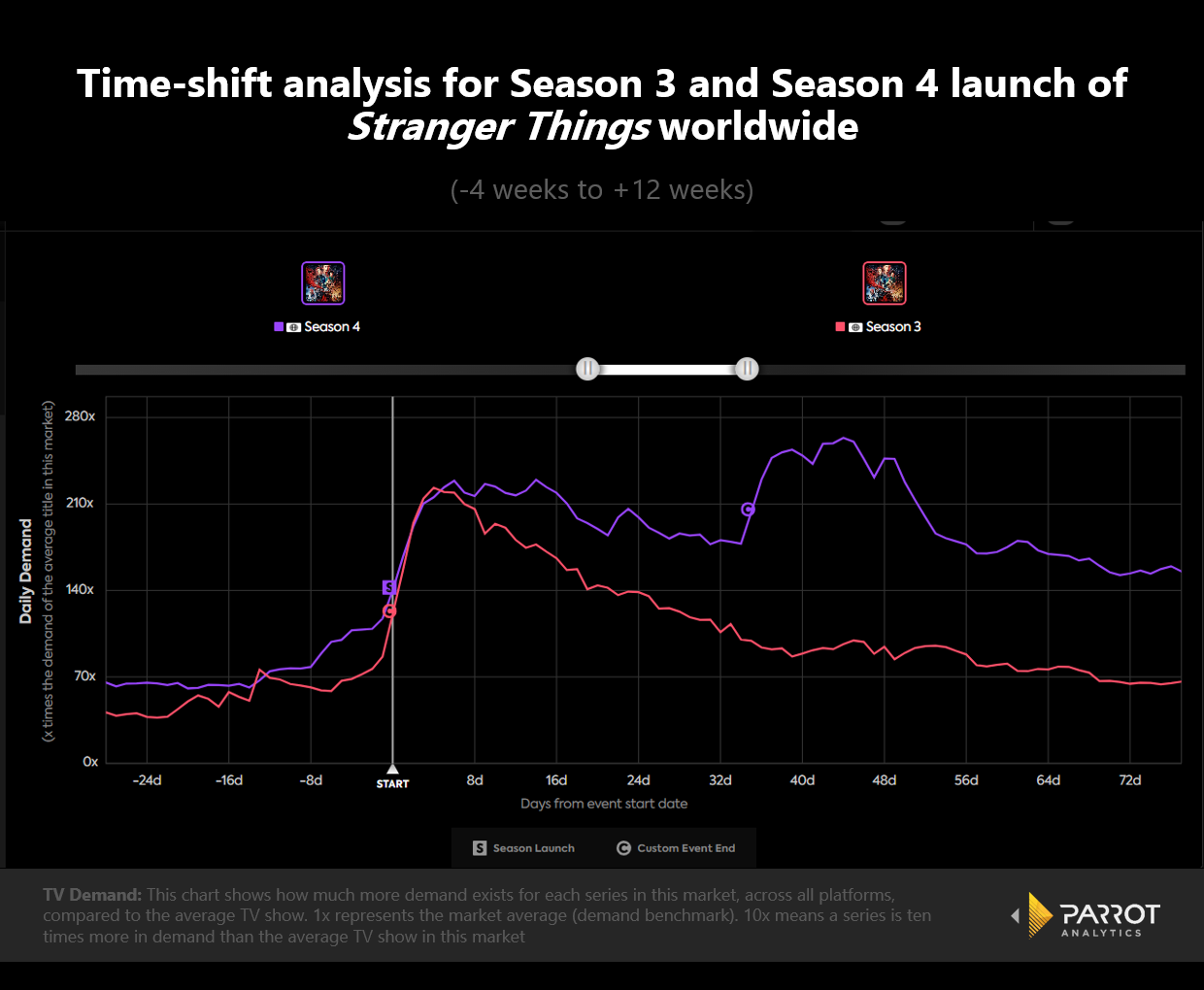 Meanwhile, as we can see from the time-shift chart comparing the demand for its last two seasons, Season 4 actually performed better than Season 3. This indicates that high levels of interest for the show remained until the end, and could justify investing in a spinoff. According to the chart, Season 4 had a demand peak of 263.6x the average, while season 3’s peak only reached 223.2x the average.

After the pandemic affected the production of Peaky Blinders, BBC decided to end the series one season early and, and invest in a movie sequel. The overwhelming success of the last season of the show demonstrates the potential for the upcoming spinoff. 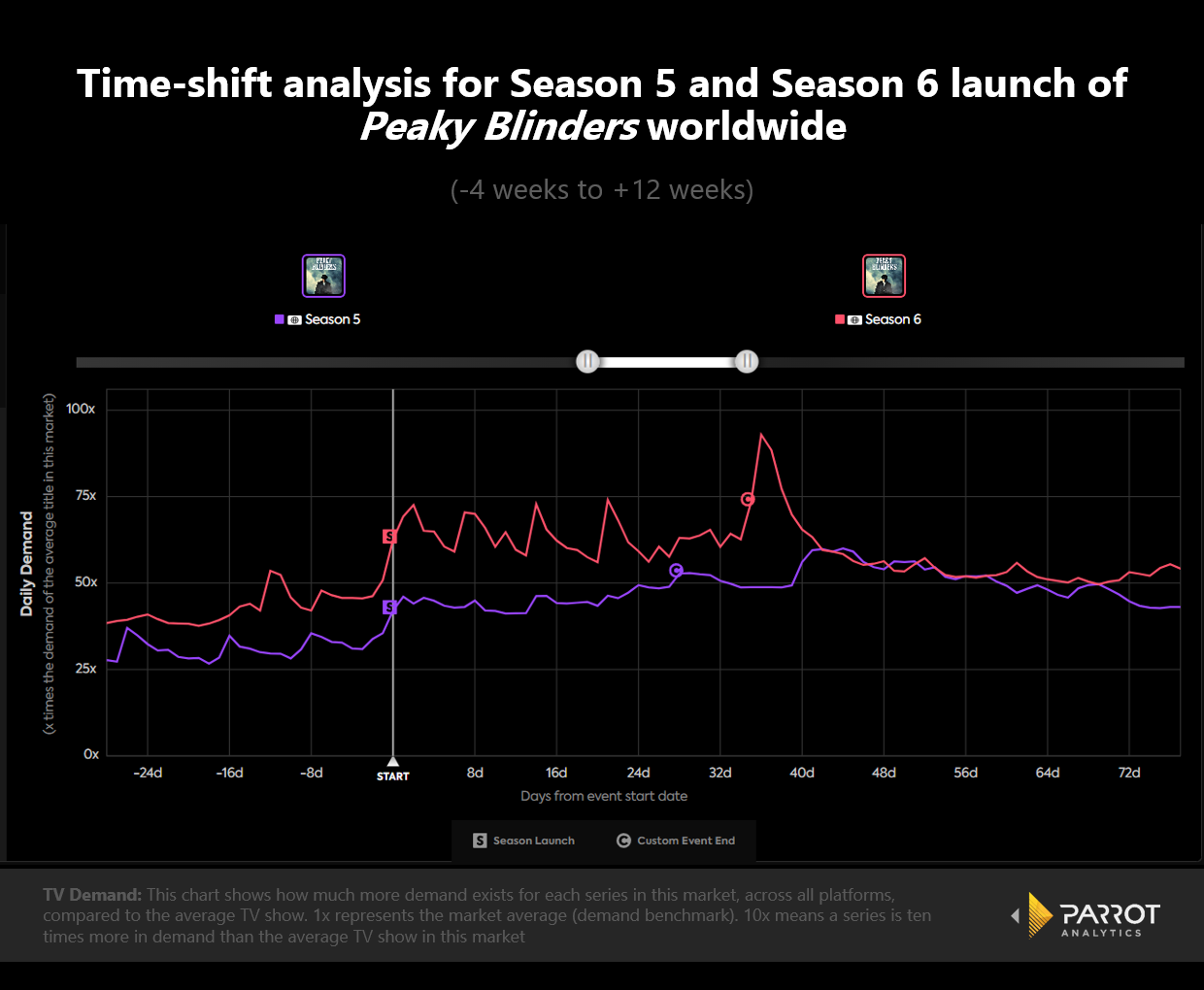 Looking at the time-shift chart comparing the last two seasons, we find that Season 6 consistently garnered more interest than Season 5. It peaked at 92.9x the demand average, while Season 5’s demand peak was 60x. 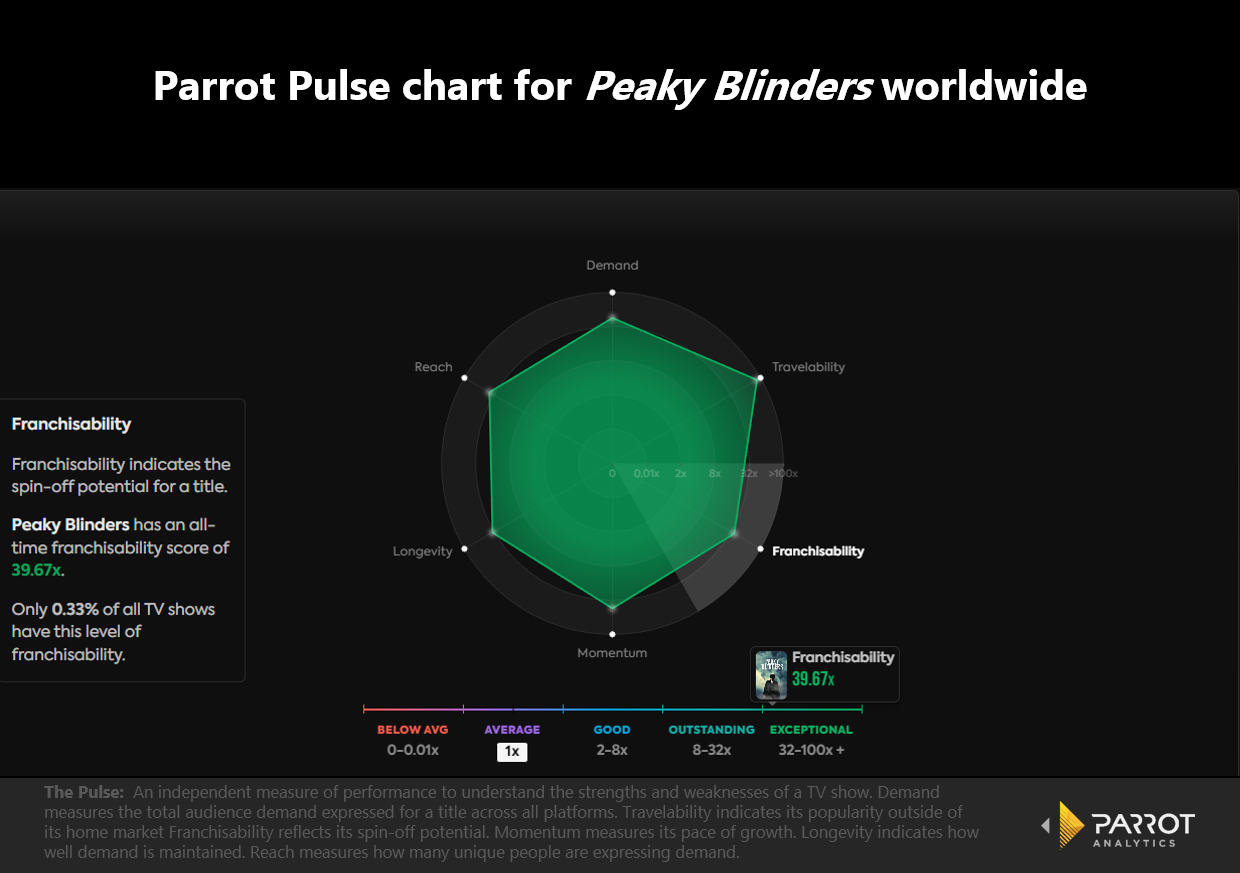 Furthermore, the Parrot Pulse chart shows that the series has 39.6x the demand average in Franchisability, as well as exceptional scores in all other metrics. 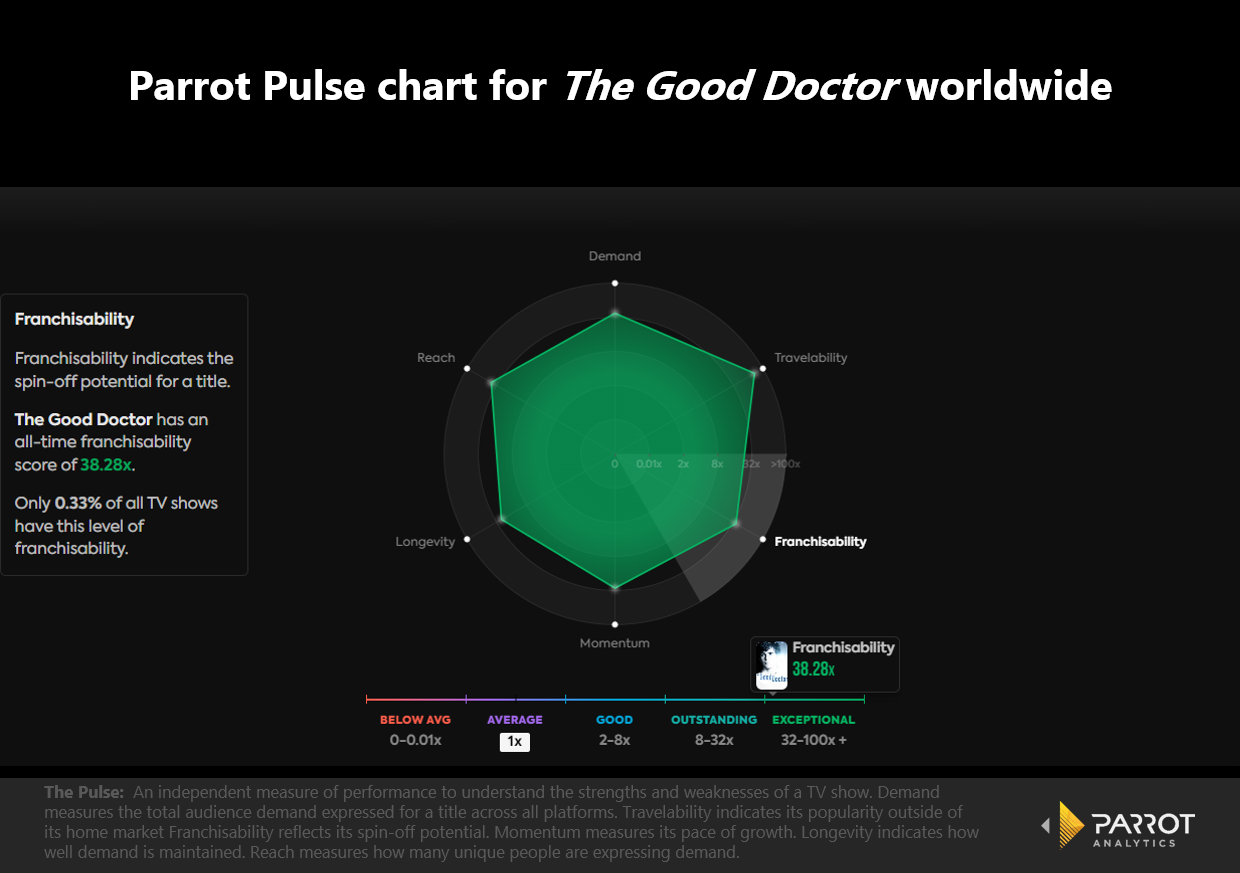 Looking at the show’s scores on the Parrot Pulse, we find that the ABC original has a very high Franchisability score, indicating great spinoff potential. The show’s score in this metric is 38.2x the demand average. 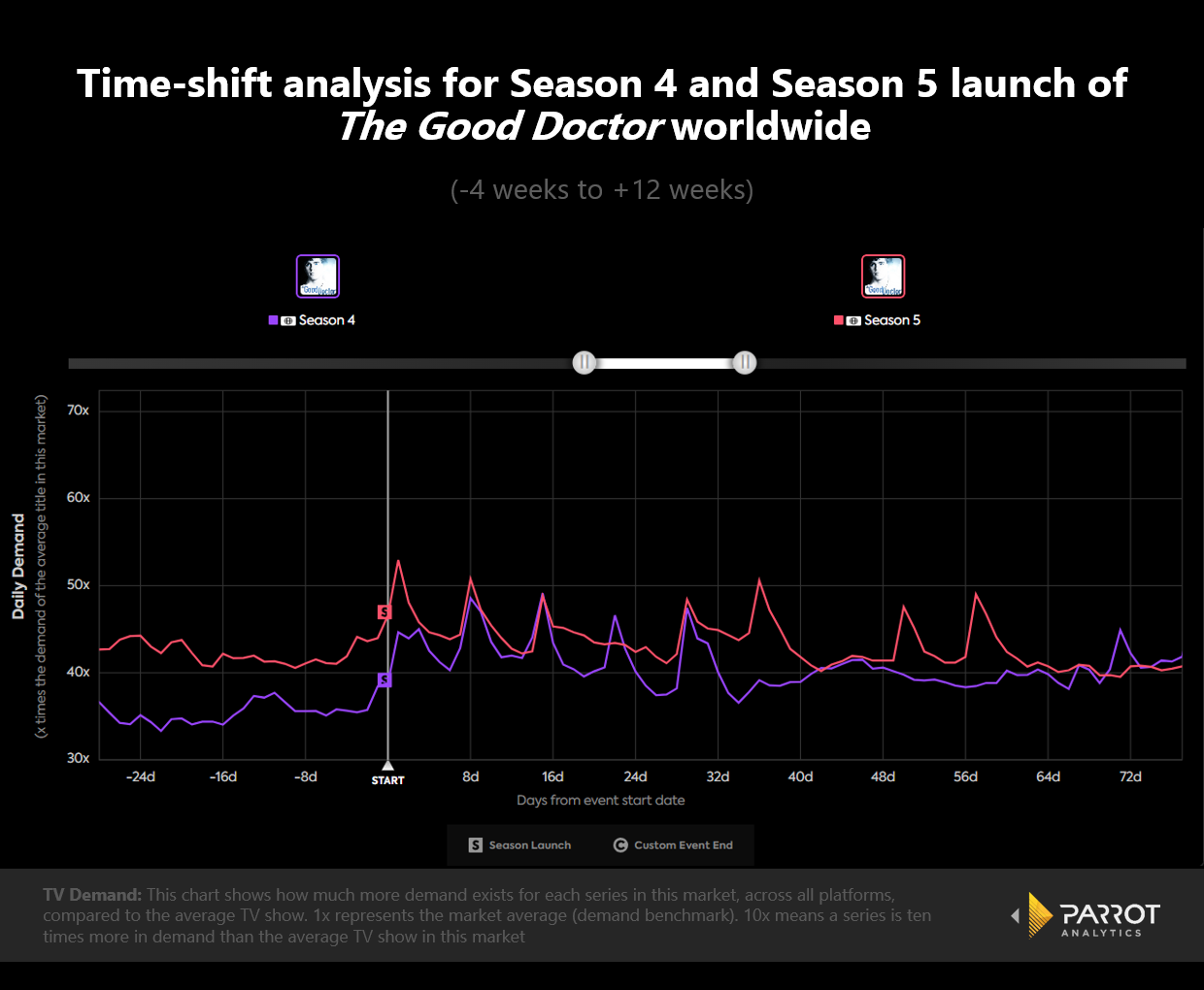 Furthermore, looking at a time-shift chart which compares the demand for the last two seasons of the show, we see that, overall, the latest season earned greater demand than Season 4. While Season 5 had a peak of 52.9x the demand average, Season 4’s demand peak was 49.1 the average. 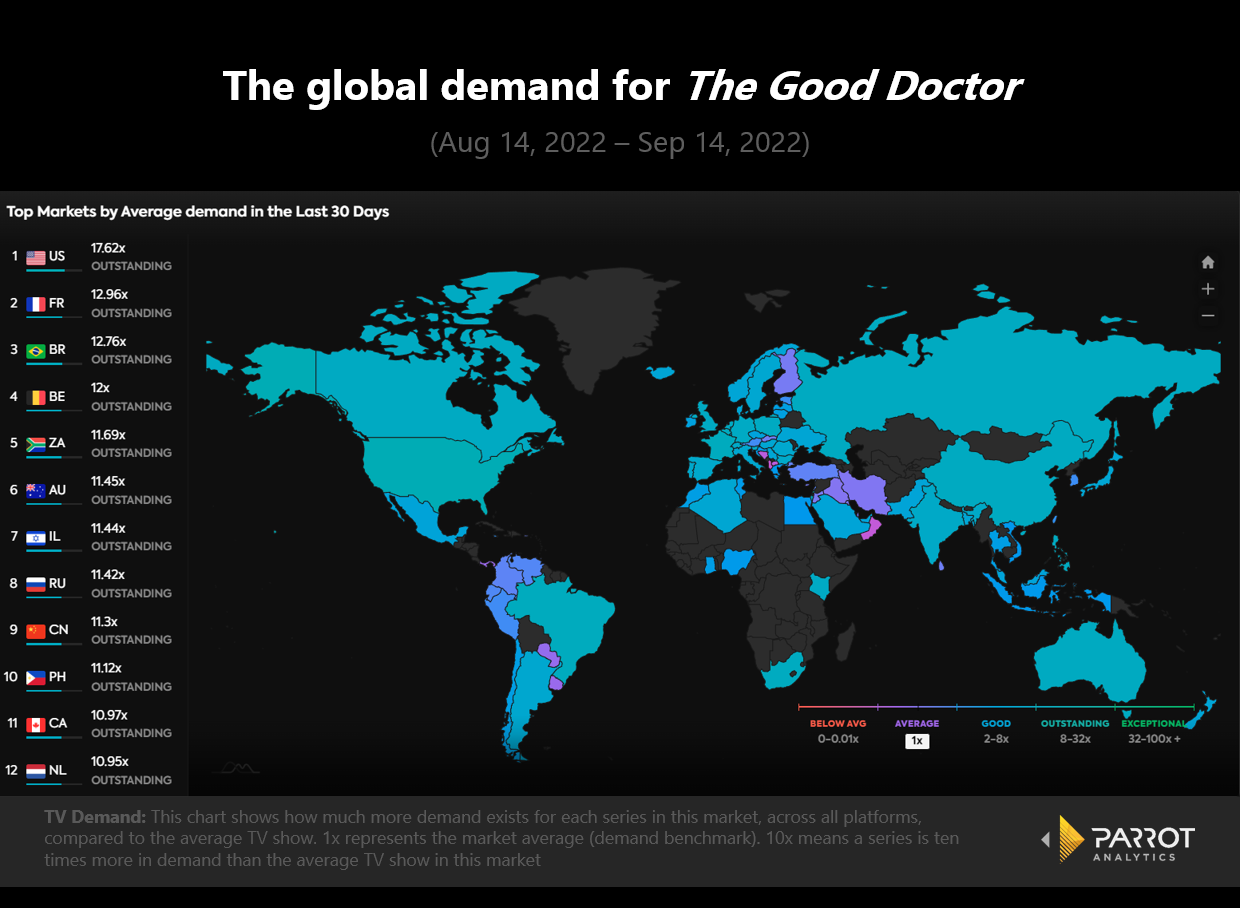 According to the market heat map, the most in-demand markets for The Good Doctor are the United States and Brazil, followed by European countries such as France, Germany and the Netherlands, as well as South Africa and the Philippines.

The top shows with only rumored spinoffs at the moment are Lucifer, Modern Family, and Brooklyn 99. One notable thing these shows have in common is that all have finished airing. 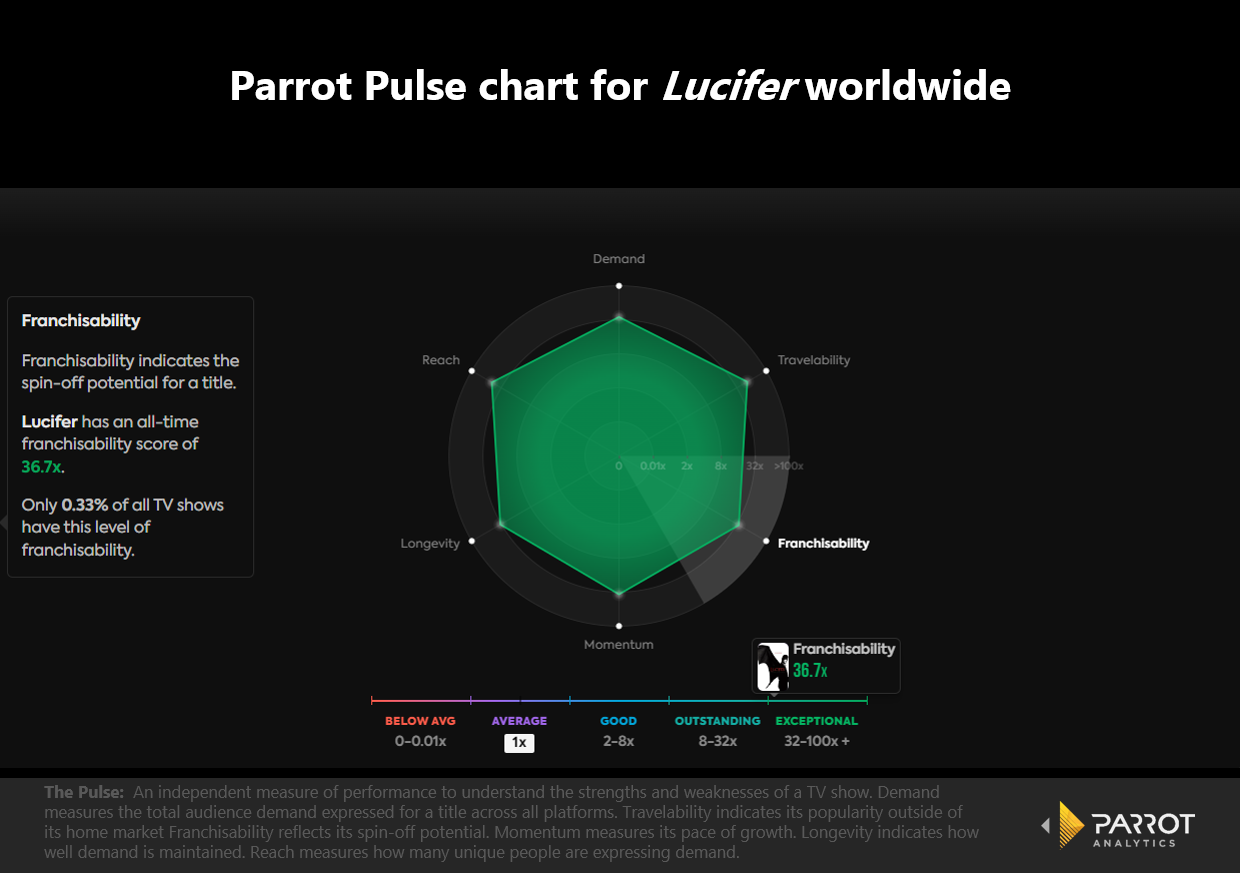 Lucifer, a show which mixes crime, fantasy, comedy, and drama, ended its six-season run in 2021. The series amassed an intense following that was not ready for it to end so soon. This is evidenced by the series’ high Franchisability score, 36.7x the average according to the Parrot Pulse.

Furthermore, the show demonstrates a balanced Parrot Pulse chart. For instance, it records 37.7x the average in Demand. According to our data, Lucifer’s all-time highest rank in Demand in the Global market is first, while in the American market it’s third. 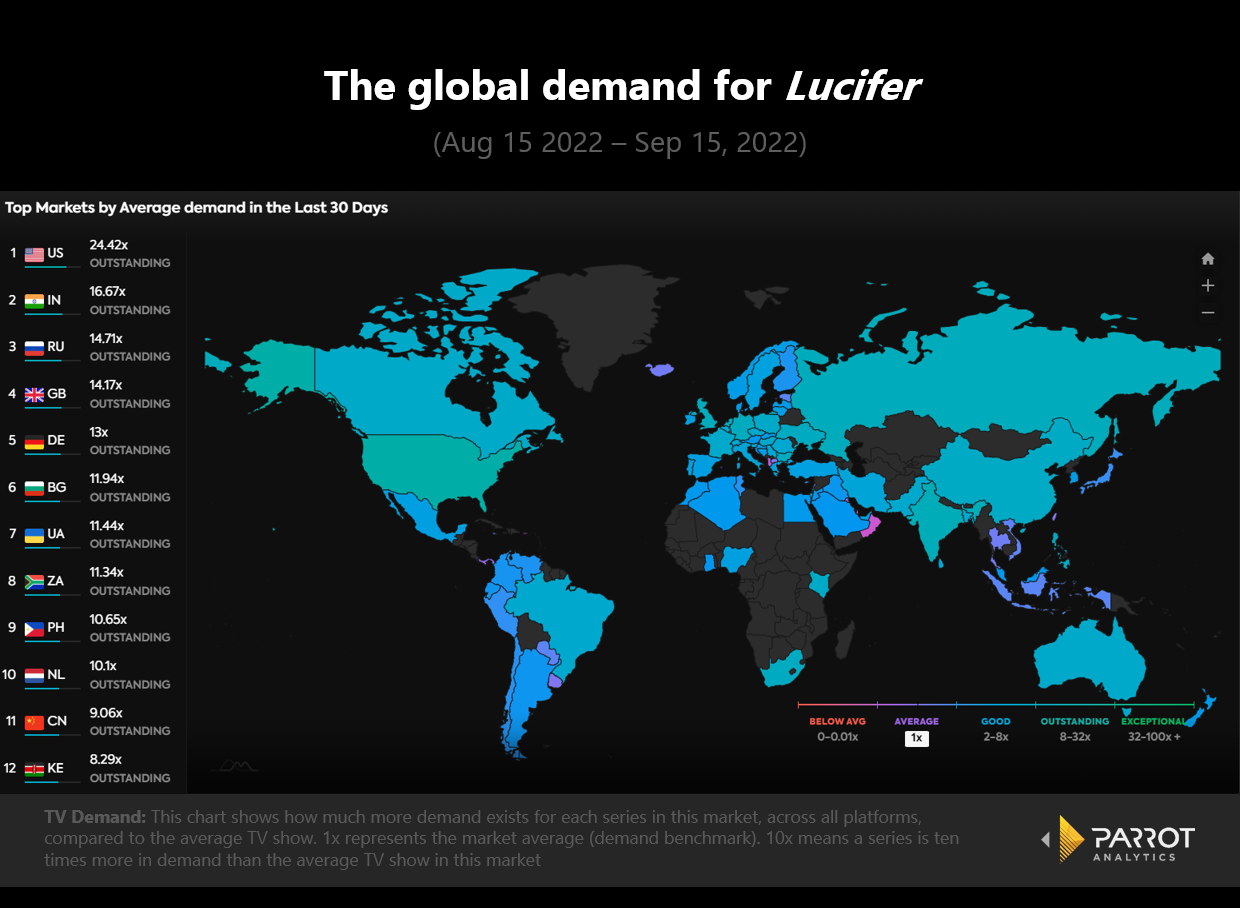 Additionally, it recorded 56.3x the average in the Travelability metric and 34x the average in the Longevity metric. According to the market heat map, among the most in-demand markets for the series are the United States, India, South Africa, Ukraine, the Philippines, and the Netherlands.

The other two shows that haven’t yet officially announced a spinoff project are both comedy series. 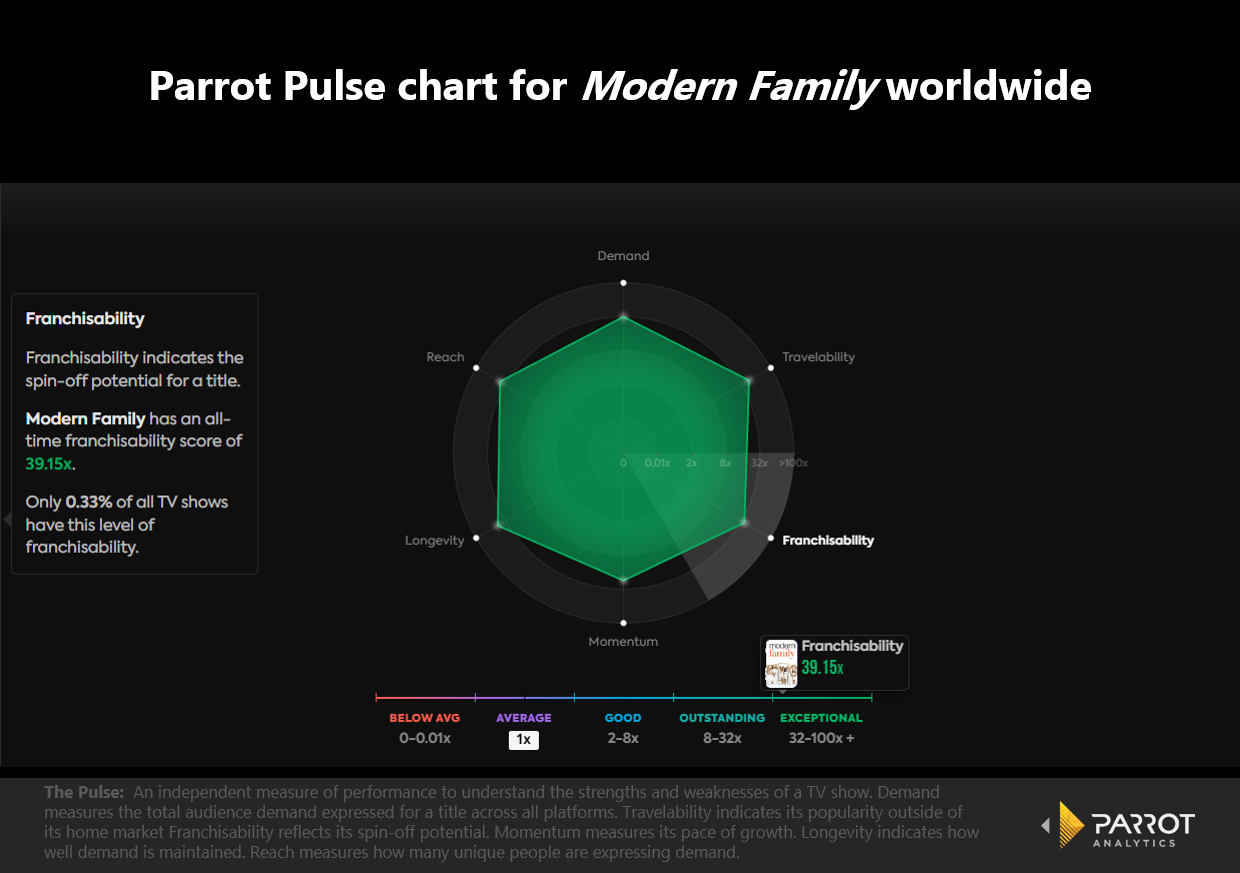 ABC’s Modern Family is one of the most successful series in the comedy genre recently, airing for a total of eleven seasons. It records an exceptional Franchisability score of 39.1x the demand average, which puts it in the top 0,33% shows in this metric.

Similar to Lucifer, it records a high score in all metrics of the Parrot Pulse. It earned 32.3x the average in Demand while receiving 45.2x the average in the Reach metric. According to our data, Modern Family’s all-time highest demand rank in the Global market is 31st, while in the American market it’s 117th. 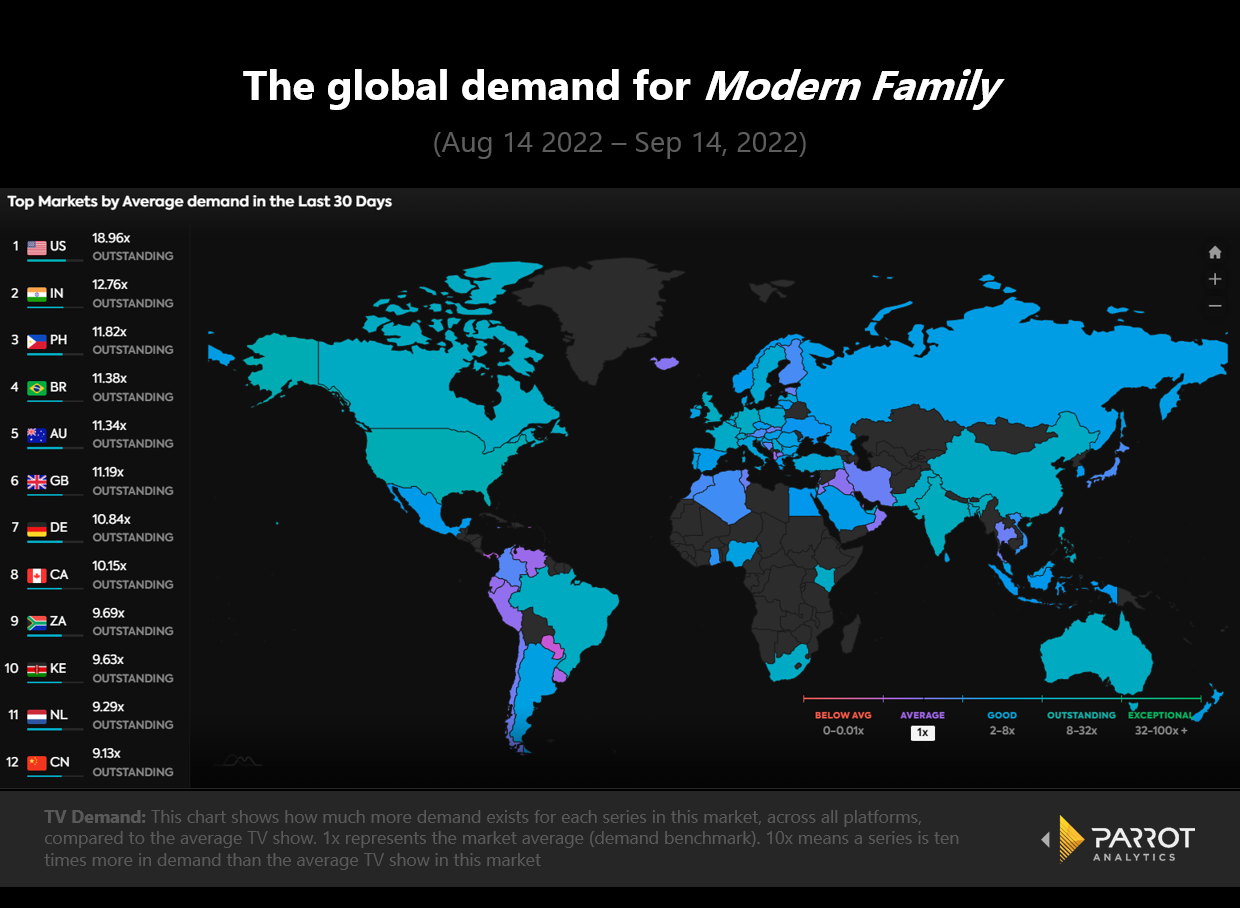 In tandem, the show has 50.5x the average in the Travelability metric, According to the market heat map, among the most in-demand markets for the series are the United States, the Philippines, Australia, Germany, and African countries, such as South Africa and Kenya.

Finally, we turn to NBC’s Brooklyn 99. The series aired for a total of eight seasons, also concluding in 2021. 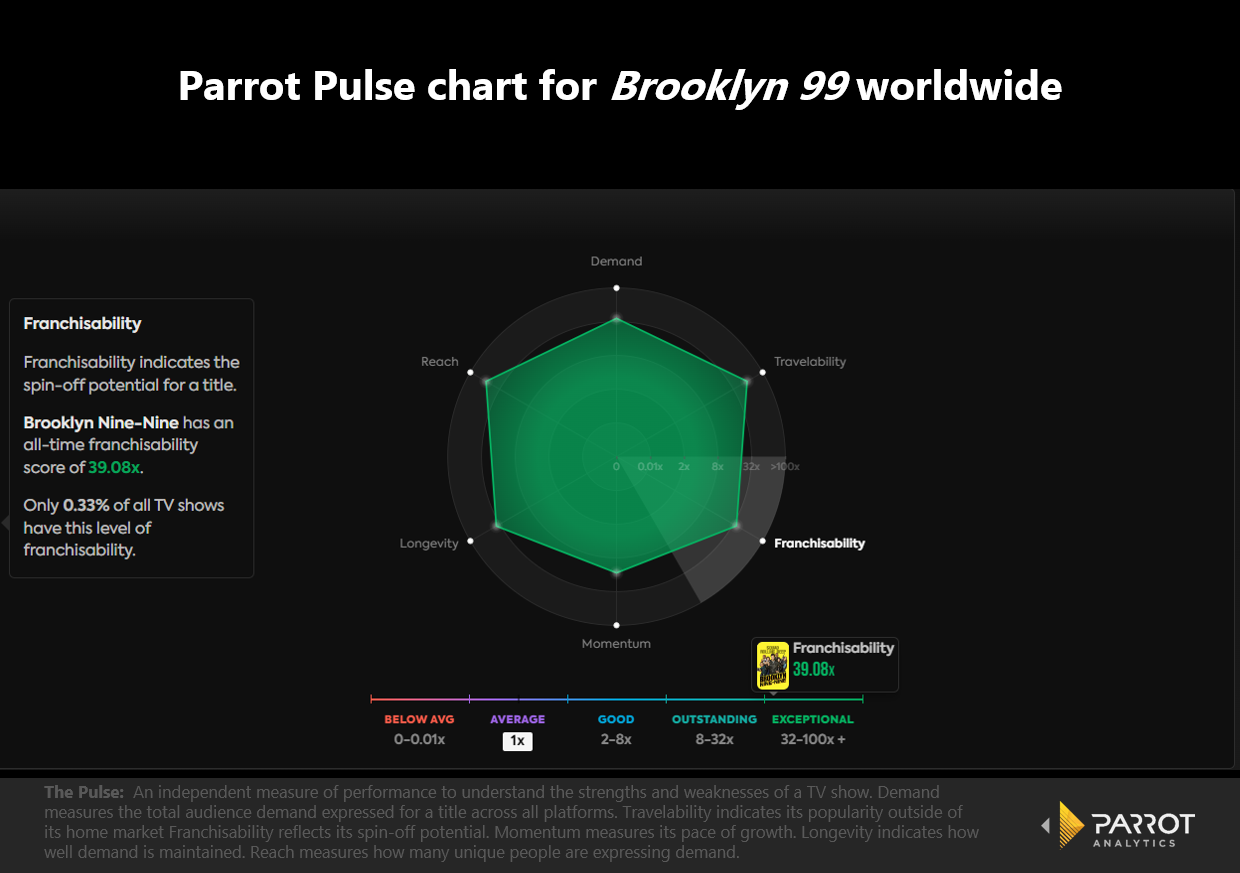 According to the Parrot Pulse, the show records 38.7x the demand average in Franchisability. Other metrics in the chart are also rated exceptional. The worldwide average demand for Brooklyn 99 is 38.5x, and its all-time highest rank in Demand globally is 22nd, while in the American market it’s 57th. 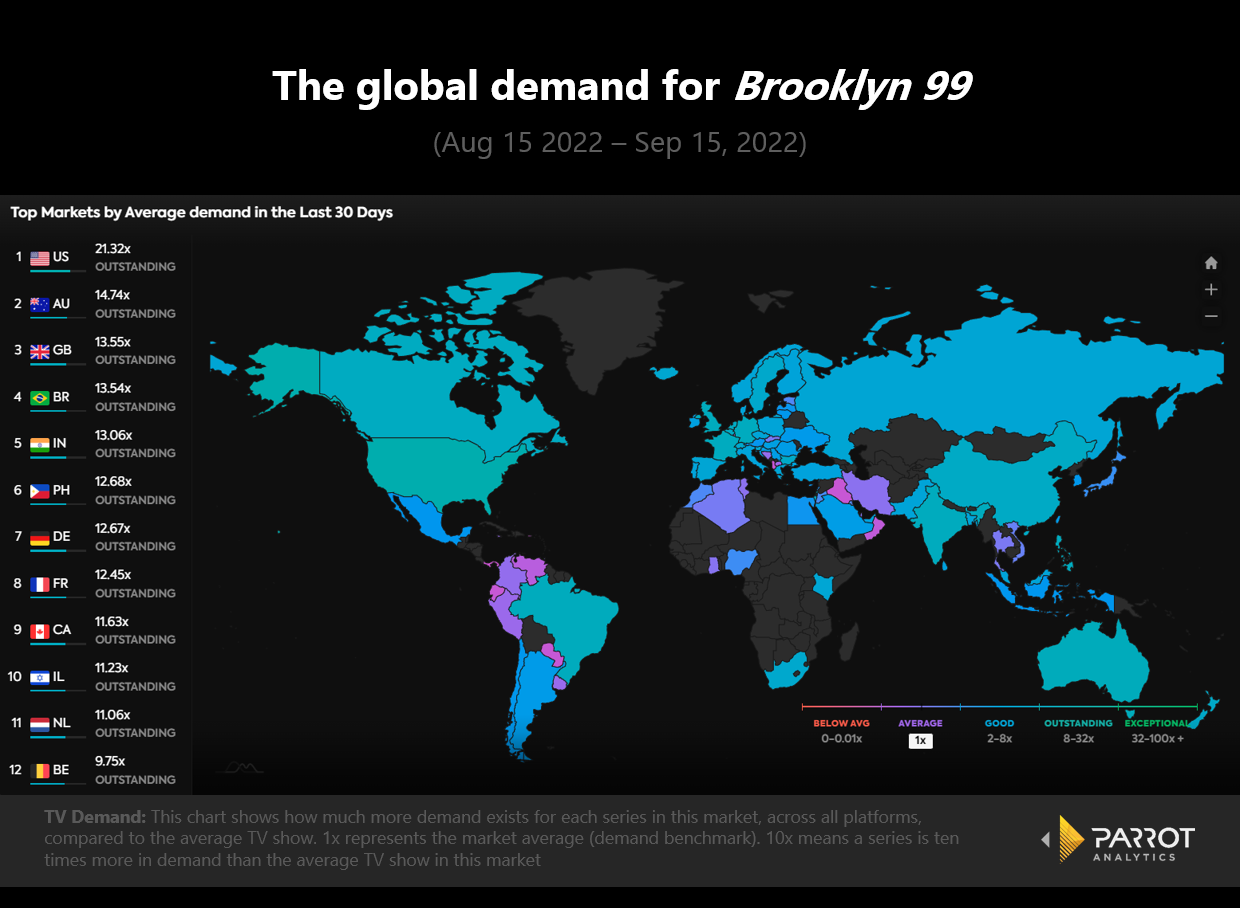 Additionally, the series earned 62.9x the demand average in Travelability, and 39.7x in Longevity. According to the market heat map, among the most in-demand markets for Brooklyn 99 are the United States, the United Kingdom, Asian countries such as the Philippines and India, France, and Israel.