Global Demand Awards 2022: How has 'Attack On Titan' achieved triumph?

For the fifth year in a row, Parrot Analytics is holding the Global Demand Awards. The awards honor the best achievements in demand in dozens of different categories, for TV, movies, and talents. In TV, one of the main categories is ‘World’s choice - Most In-Demand TV Show in the World 2022’.

The winner of the category in 2021, Attack On Titan is nominated again this year. The anime inherited the prize from HBO’s Game Of Thrones, which won it in 2020. For Attack On Titan, the win last year was a big statement of the success of the show.

This year, Attack On Titan is the only anime and foreign language title competing in the main category, and, going by the demand distribution numbers, it has a great chance at winning once again. The total demand for the anime since January 01 is 70.4x, putting it ahead of most of its competitors in the category.

Based on the manga series of the same name, Attack On Titan takes place in a world where humans are living closed off in cities, where they can be protected from the man-eating creatures on the outside.

Our main character is Eren Yeager, a boy who lost his mother to one of the monsters and is now on a mission to eradicate them in return. With an R - 17 + rating and a language barrier, the series had quite the uphill battle enticing a big enough audience, the records of demand for Attack On Titan don’t lie. 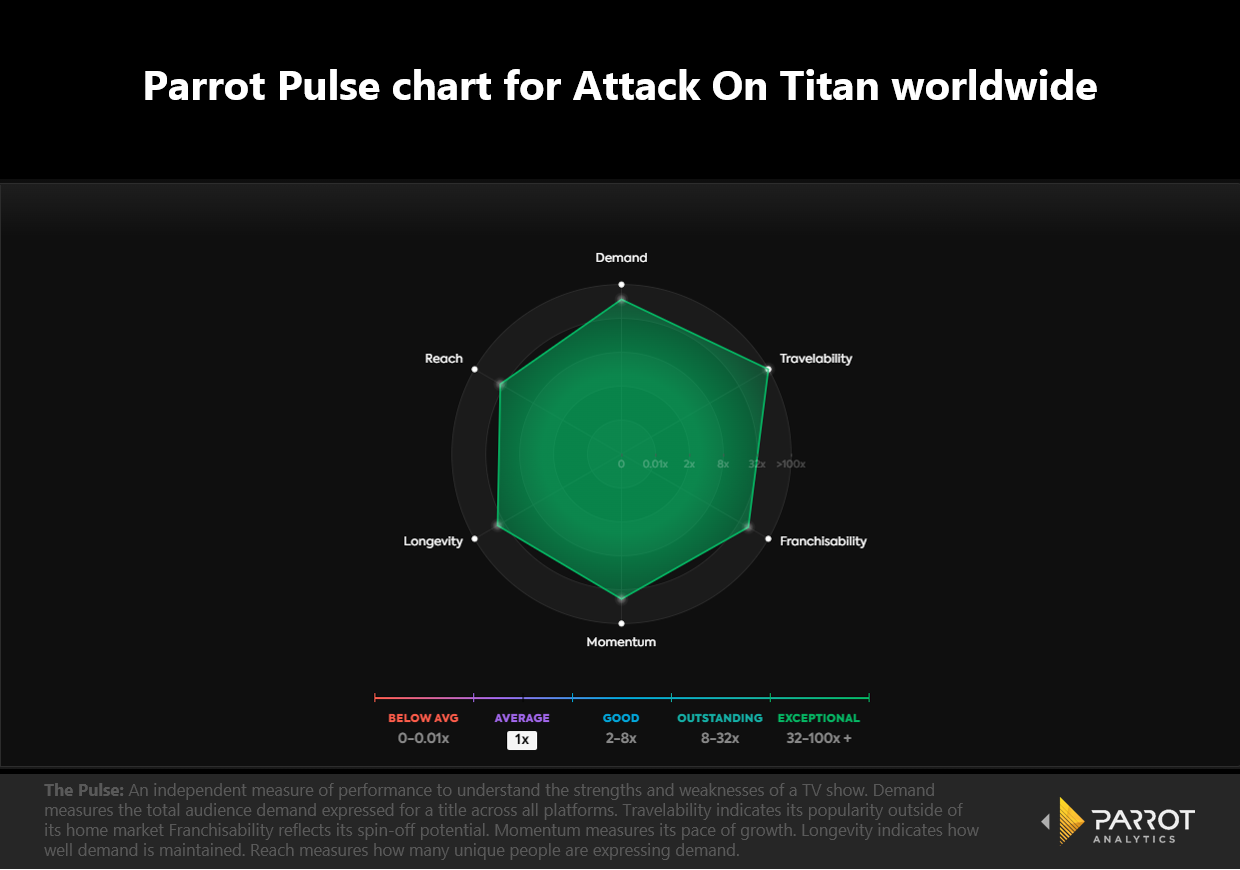 The Parrot Pulse chart for Attack On Titan stands out for its balance: the show has been able to garner an outstanding score for every metric. Aside from the incredible Demand score - 70x the average - the series dazzles with its Franchisability score of 53.5x more than the average show. The Reach metric score - which measures the number of unique users expressing demand for the show - is also exceptional, at 40.4x the average series reach.

Additionally, Attack On Titan has the best of both worlds in regards to Longevity and Momentum. The anime records high levels of Longevity, which measures how the performance of the show is maintained over time, and Momentum, which measures the growth speed of demand over the last year, compared to that of the average title. Having debuted in 2013, the show records 46.6x the average series in Longevity. Meanwhile, with the two most recent seasons being released in 2021 and 2022, the series can garner 50.8x the average in Momentum. 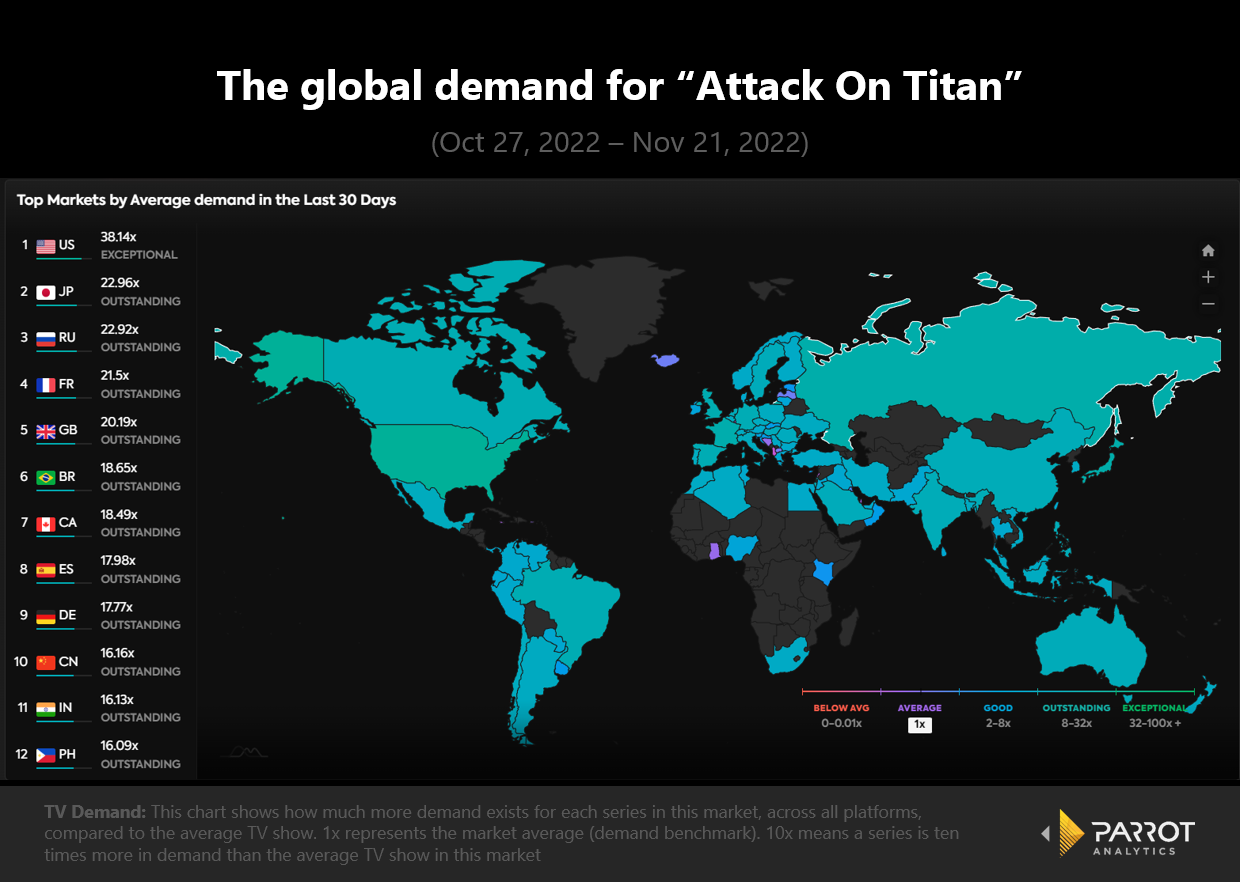 Perhaps the show’s most impressive score is in Travelability. The metric reflects how good is the performance of a show outside of its market of origin. Attack On Titan records a whopping 131x the average series in this metric.

The show is successful among markets across Europe, such as France, the U.K., and Russia, as well as Latin America, especially in Brazil where it registers 18.6x the demand average. Finally, the show’s demand is also high in Southern parts of Asia, such as India and the Philippines, where it registers 16.1x and 16x the demand average, respectively.

How has Attack On Titan achieved this level of success?

The sheer amount of accomplishments by Attack On Titan leaves us struggling to understand how the series has become this successful. Someone who can give a clue as to why the show has been so successful is the series director, Yuichiro Hayashi. In an interview with Douglas Montgomery for Parrot Analytics at the beginning of 2022, he discussed what factors he credits for the triumph of Attack On Titan.

According to Hayashi, the increasing popularity of the anime genre has had a generalized effect that benefitted the show. He believes that there has been a change in the Otaku and geek culture, which has become less and less distant from the general mainstream culture.

Furthermore, Hayashi attributes a great part of the thriving worldwide performance of Attack On Titan to the accessibility provided by streaming services. For him, allowing the audience to have a say in what they want to watch has crucially improved the performance of foreign content in Western countries.

Another formidable aspect of Attack On Titan’s achievements is its decidedly small budget compared to increasingly astronomical Hollywood budgets. The winner of the Most In-Demand TV Show in the World of 202, Game Of Thrones, for instance, had a budget of approximately $15 million for each episode.

Finally, the director highlights that the appeal of the series has to do with its portrayal of a brave character that who rebels and fights for years against a greater power. For Hayashi, this kind of story has the power to easily gain the sympathy of the audience.

Overall, the triumph of Attack On Titan encapsulates the many possible avenues for capturing an audience and demonstrates that what some consider weaknesses might actually be strengths. Whatever makes a series unique is often what makes it popular, and Attack On Titan is proof of that.