Since the release of its first episode in 2013, PAW Patrol has been gained worldwide success within the children’s genre. The Canadian animation from Spin Master Ltd., which follows a group of dogs and ten-year-old Ryder as they complete rescue missions around their neighborhood, has become a multibillion dollar franchise and dominates the global licensing market. Whether its the original television show, consumer products, or live stage shows, it is understandable why this children’s show has a high level of demand worldwide. This article will cover the demand for PAW Patrol, its top markets, as well as possible reasons for its consistent success over the years since its release.

The chart below shows the level of global demand for PAW Patrol over the past thirty days. It had an average level of 40.4 times more demand than the average show worldwide, while peaking at 45.9 times more demand than the average show worldwide, over the past month. This is an exceptional level of demand, considering that only 0.2 percent of series in any genre have this level. With this being said, this exceptional level of demand is quite an achievement, considering the series was first released almost nine years ago. This indicates a high level of consistency when it comes to global demand and it will be interesting to see how this continues over time. 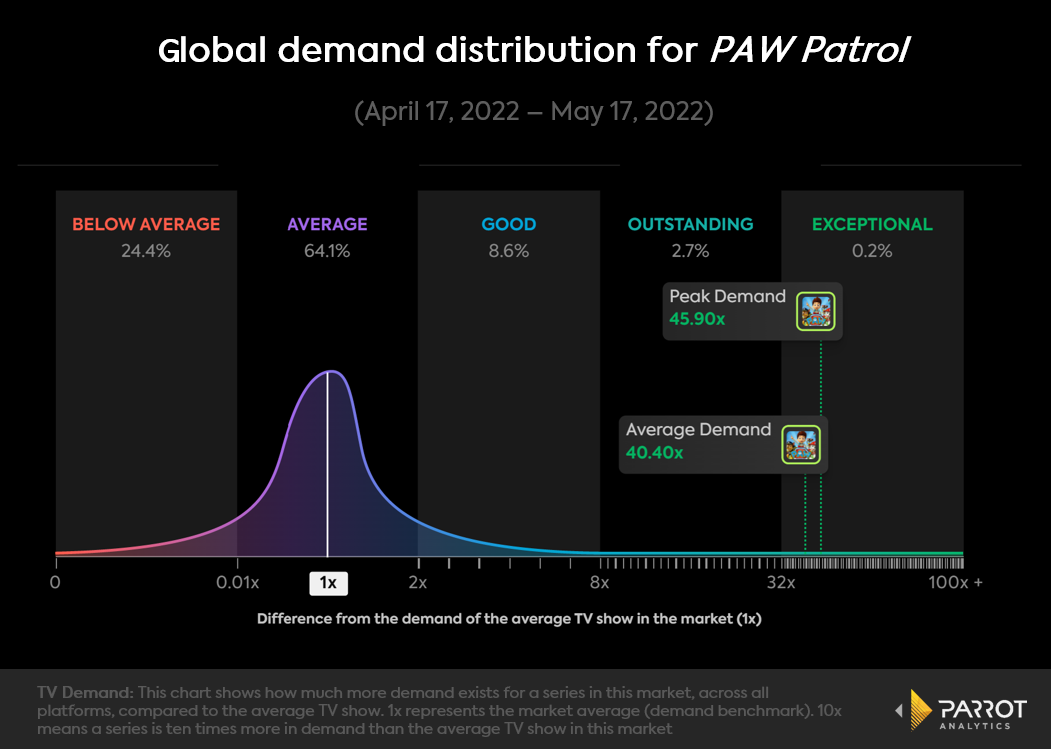 Released at the time a number of popular series targeted at preschool-aged children, such as The Backyardigans, Handy Manny, and Yo Gabba Gabba, were coming to an end, PAW Patrol managed to fill the gap in the market. However, having made over 7 billion dollars in global retail sales over 2018, it was clear the series went above and beyond many of those that had gone before when it came to global success. Jennifer Dodge, Spin Master’s executive vice president of entertainment, speculated that this widespread success could also have been due to the series being a standout against other new launches at the time, which “didn’t hit the zeitgeist in a major way.”

Demand for the Children’s Genre

PAW Patrol has been a standout show within the children’s genre for a number of years. The chart below shows the top ten most in demand series worldwide over the past thirty days. Spongebob Squarepants, which has been around for over two decades and caters to a number of age groups and cultures, is at the top of this list with 50.1 times more global demand than the average show. PAW Patrol is second to this, with 40.4 times more demand than the average show worldwide. 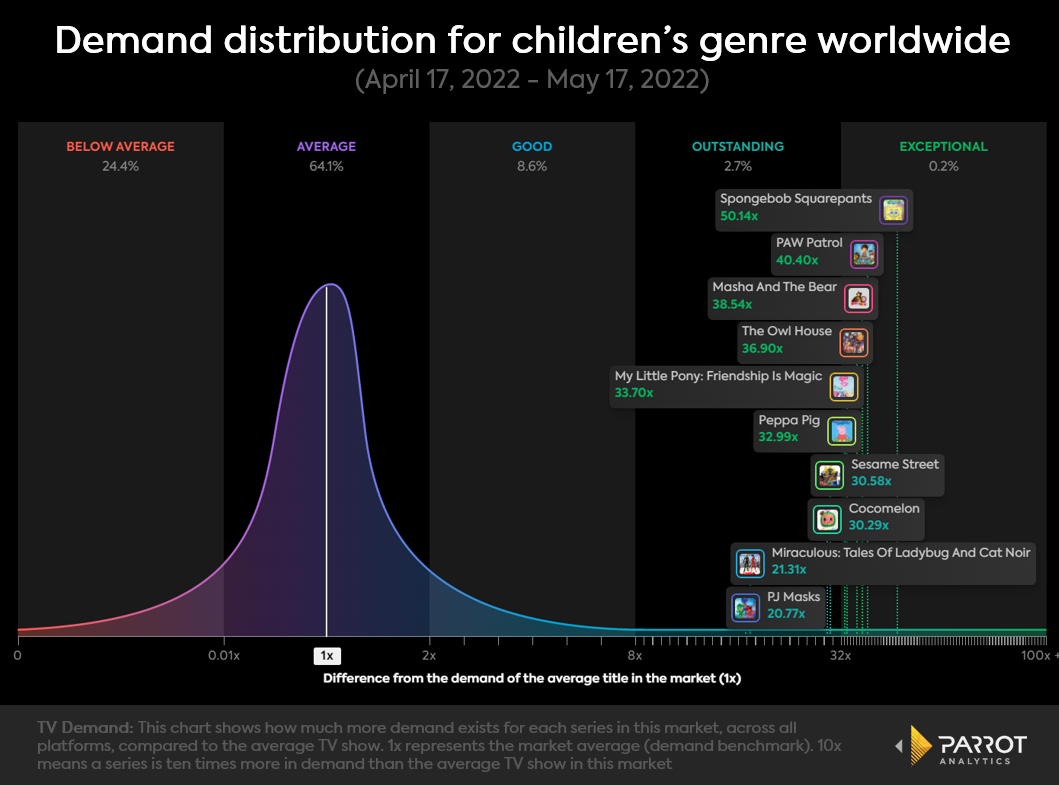 Considering this series is only really targeted towards preschool-aged children, this is interesting and could indicate why the series in such high demand. While Spongebob Squarepants has a wide following and many adults choose to watch it for themselves, PAW Patrol  would likely only be watched by adults alongside a preschooler. With this in mind, the exceptionally high level of demand for PAW Patrol is an indication of just how hugely popular the series is amongst 2 to 5 year-olds, as well as their parents. 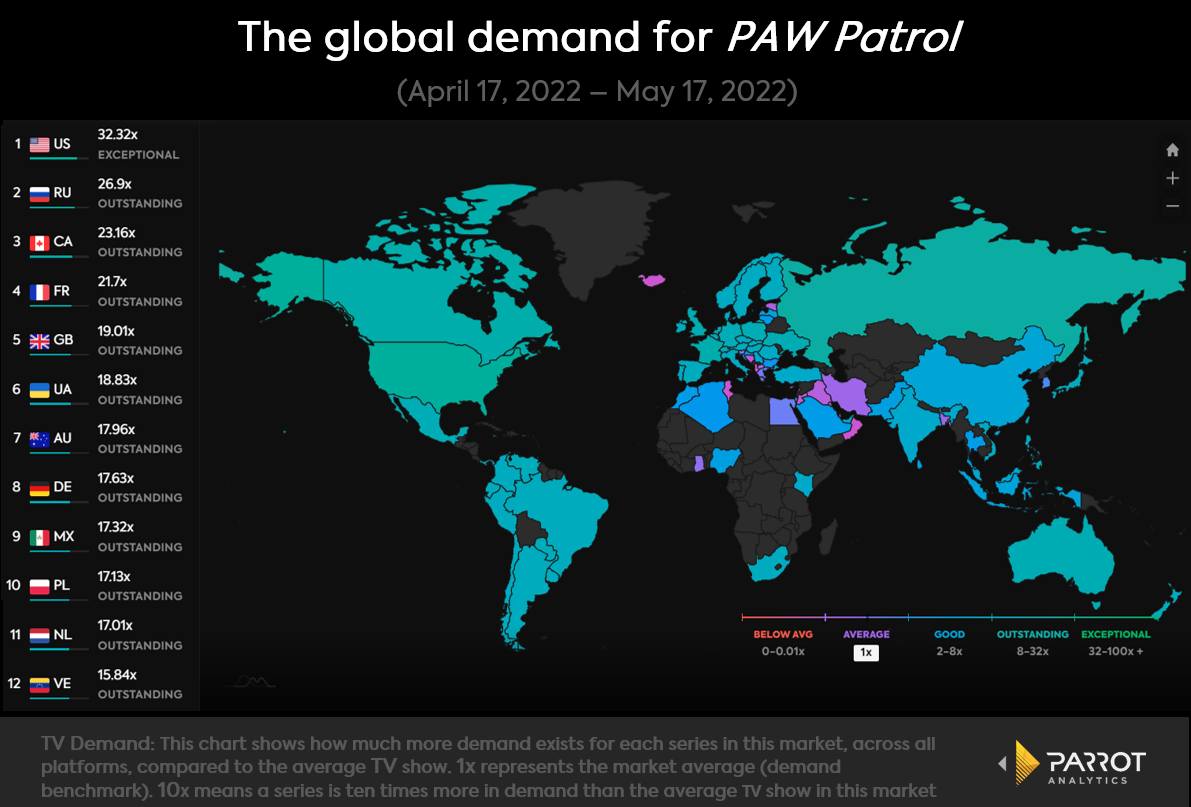 The chart below shows six dimensions of measurement for PAW Patrol. As indicated in the previous chart, the PAW Patrol series has a very high level of travelability, which refers to how popular the show has been outside of its home market over the past twelve months. The series has 84.2 times more travelability than the average show worldwide, which is an exceptional level. Longevity, which refers to how well the show has maintained demand over time, is also at an understandably high level - 27.4 times more longevity than the average series worldwide. 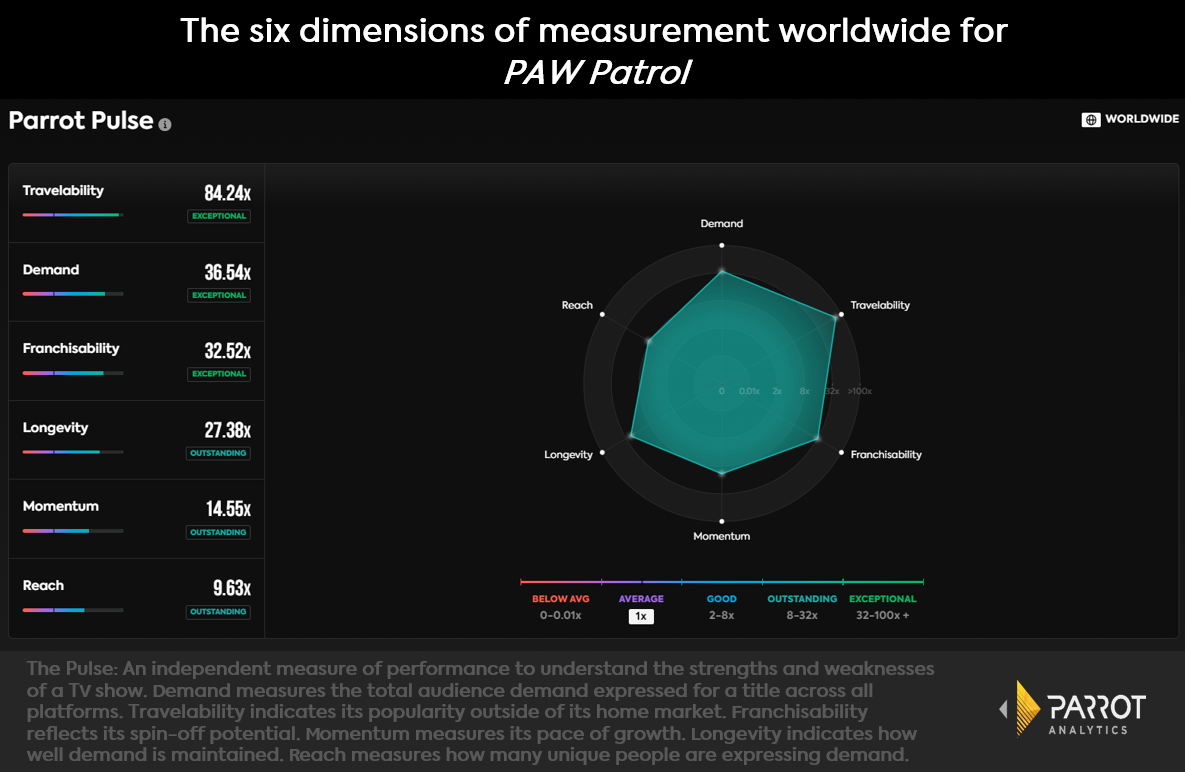 Another exceptional and relatively understandable measurement on the above chart is franchisability, which refers to the spin-off potential for a series. PAW Patrol has 32.5 times more franchisability than the average series worldwide. With the PAW Patrol film adaptation, PAW Patrol: The Movie grossing over 135 million dollars in the box office last year, while also remaining as a global presence in terms of toys and other related merchandise, it is clear the series as a franchise is very well received by its respective target audience.

While breaking into the children’s market at the right time was likely a large influence on the series’ initial success, PAW Patrol has become a massive and longstanding leader when it comes to shows within the children’s genre. Whether it’s from the show’s presence around the world through multiple languages, great franchisability, or its ability to specifically reach the preschooler market, the global demand for PAW Patrol is at an exceptional level and makes for a perfect example of a successful children’s series. Now with a second PAW Patrol film adaptation in the works, it will be interesting to see how demand for the series continues.