Pre-release demand for Stranger Things is on the rise as we get closer to the release of its fourth season, which was announced by Netflix in February. Unlike the previous three seasons, the Netflix original will be released in two parts - the first volume on May 27 and the second on July 01.  If the spike in demand for the series is anything to go by, the release announcement appears to have been exciting news for many fans, particularly after pandemic-related delays in production. Alongside a number of other factors, the extended wait could have been an added influence in the fast-growing demand for the new season in the current pre-release period, as well as a possible reason for why that level of demand is higher than that of prior seasons. This article will cover the current level of demand for Stranger Things, as well as how this level compares to other seasons in the build-up to their release. 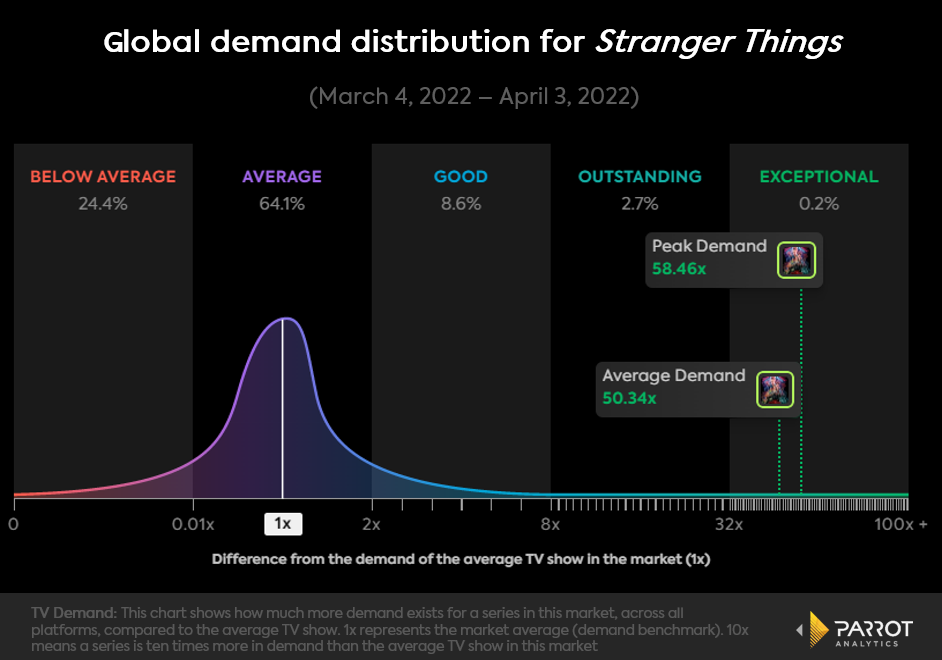 This exceptional level of demand at the moment could be an indication of how dedicated a following the series has gained over its time and (as will be discussed later) an ability to hold demand consistency over time since the release of its first season. Depending on how well the new season - with its two-part release and longer runtime - is received by fans, the level of demand shown in the chart above could be the beginning of a bigger surge as we head closer to May 27th.

The chart below shows the six dimensions of measurement worldwide for Stranger Things. As mentioned earlier, the series has managed to hold a consistent level of demand over the time period since the release of its first season. This is reflected in the measurement of longevity shown below, which measures how well a show maintains demand over time. Currently the Netflix series has 37.2 times more longevity than the average series worldwide. Moreover, this exceptional level of longevity is reflected in the other areas of measurements listed below. One of these that is particularly high is travelability, which measures how popular a show is outside of its home market. Stranger Things has 78.7 times more travelability than the average series worldwide. This shows that the series is very well received in many other markets outside of the United States, a point that will be expanded on further in this article. In addition to this, considering this measurement is in relation to the past twelve months, this further solidifies the series’ level of longevity. 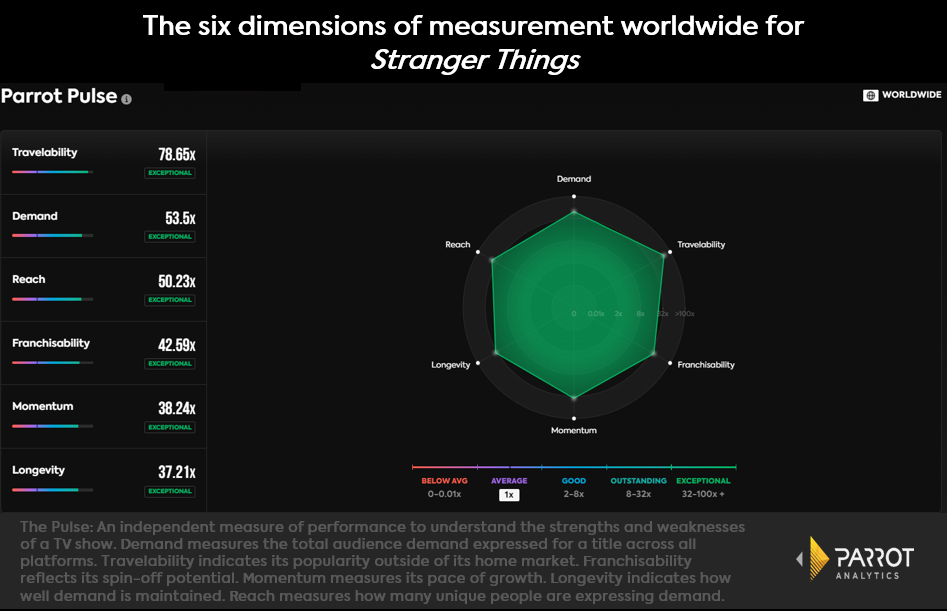 The chart below shows the top twelve markets that have had the highest amount of demand for Stranger Things over the past thirty days. The United States is at the top of this list, with 35.2 times more demand than the average show. It is followed, quite interestingly, by Russia, which has 20.7 times more demand than the average series. This is an outstanding level of demand for the series in Russia at the moment, which is an interesting point to consider. The series, while of course being based in the cold war era, had occasionally portrayed Russia in a negative light, something that has had mixed reactions from that market. On another note, it is also interesting to note the diversity in culture and range of spoken languages present in the below list. The success in this area is definitely reflected in the show’s exceptional level of travelability covered in the last chart. 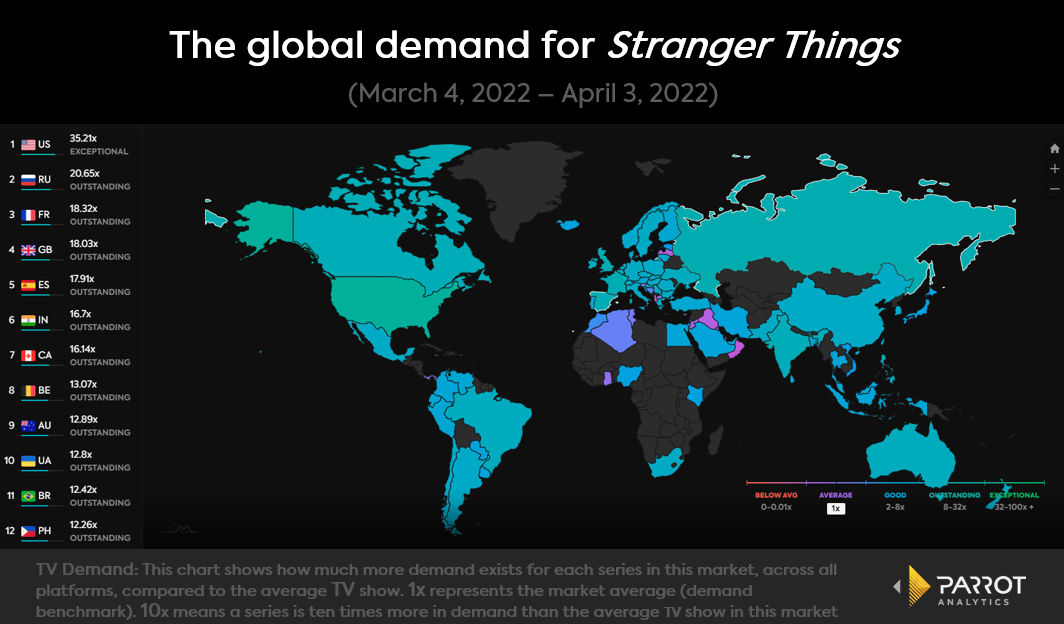 One way of speculating how well the season four release may do, at least in terms of momentum and growth in demand, is to consider the levels of demand for previous seasons in their respective pre-release periods. The chart below shows the worldwide demand for Stranger Things over the pre-release periods of both season two and season three, as well as where season four is at as of now. 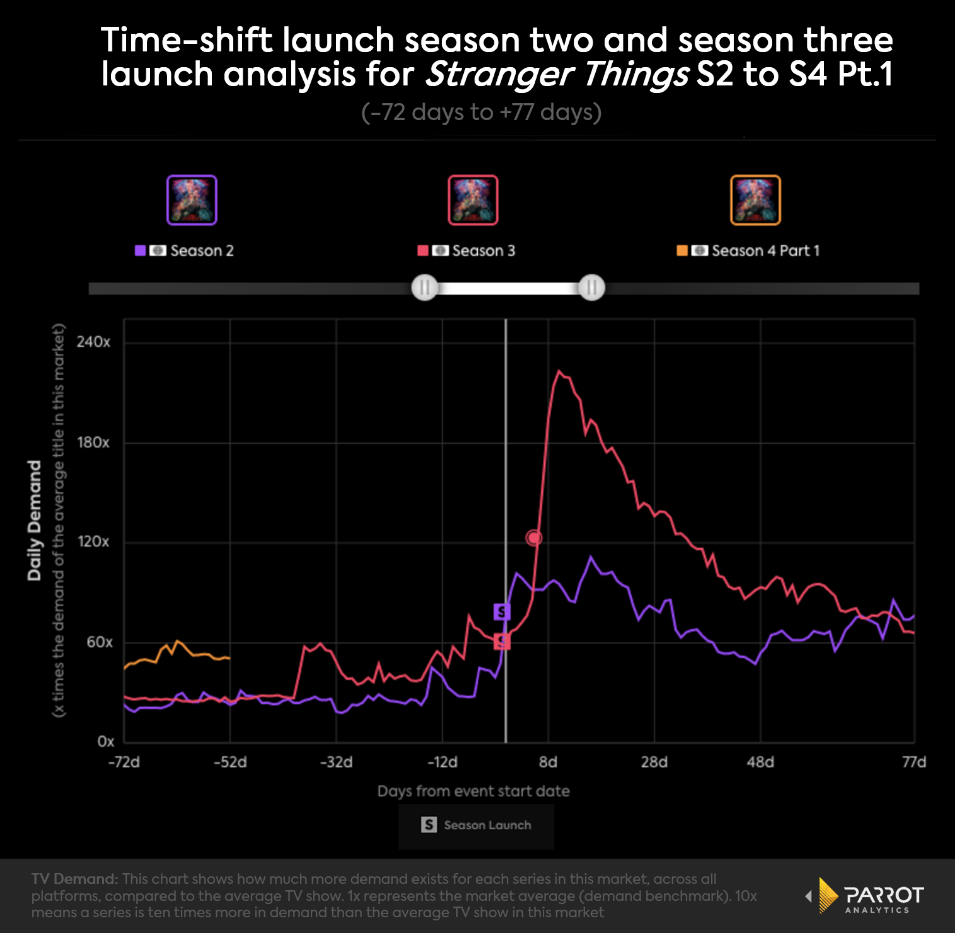 At sixty days prior to the season release, both seasons two and three were sitting at just above 25 times more global demand than the average show. However, season three saw a spike in demand in the later half of May 2019, reaching 57.7 times more global demand than the average show worldwide - and still 38 days prior to its release. This was very likely due to the surprise video clip Netflix had uploaded on May 21st that year. Demand for the season remained significantly higher than that of season two afterwards, dropping slightly at the time of release and then raising to a record high a week after airing. In saying this, the current demand for the first part of season four is almost double the level of demand we saw for both seasons two and three at this time. It will be interesting to see how this changes in the coming weeks, especially if there are additional teaser clips and other surprise promotional announcements as we had seen with season three.

In considering the above history of demand for Stranger Things, intentional sneak-peeks and timely release statements appear to have been a way of generating demand - something that has happened not just in its home market, but around the world. This being said, with a peak of 58.5 times more demand last month, and with still over fifty days until the release of season four, it will be both intriguing and exciting to keep an eye on as we come closer to May 27th. With season three’s cliff-hanger ending and with over 13.5 million views now on last year’s teaser clip, this Netflix original series might be able to break its own record.