The best performing titles in each metric of The Pulse

In this article, we take a look into all six metrics to find which shows have the most well-rounded performances and what titles stand out in each one. 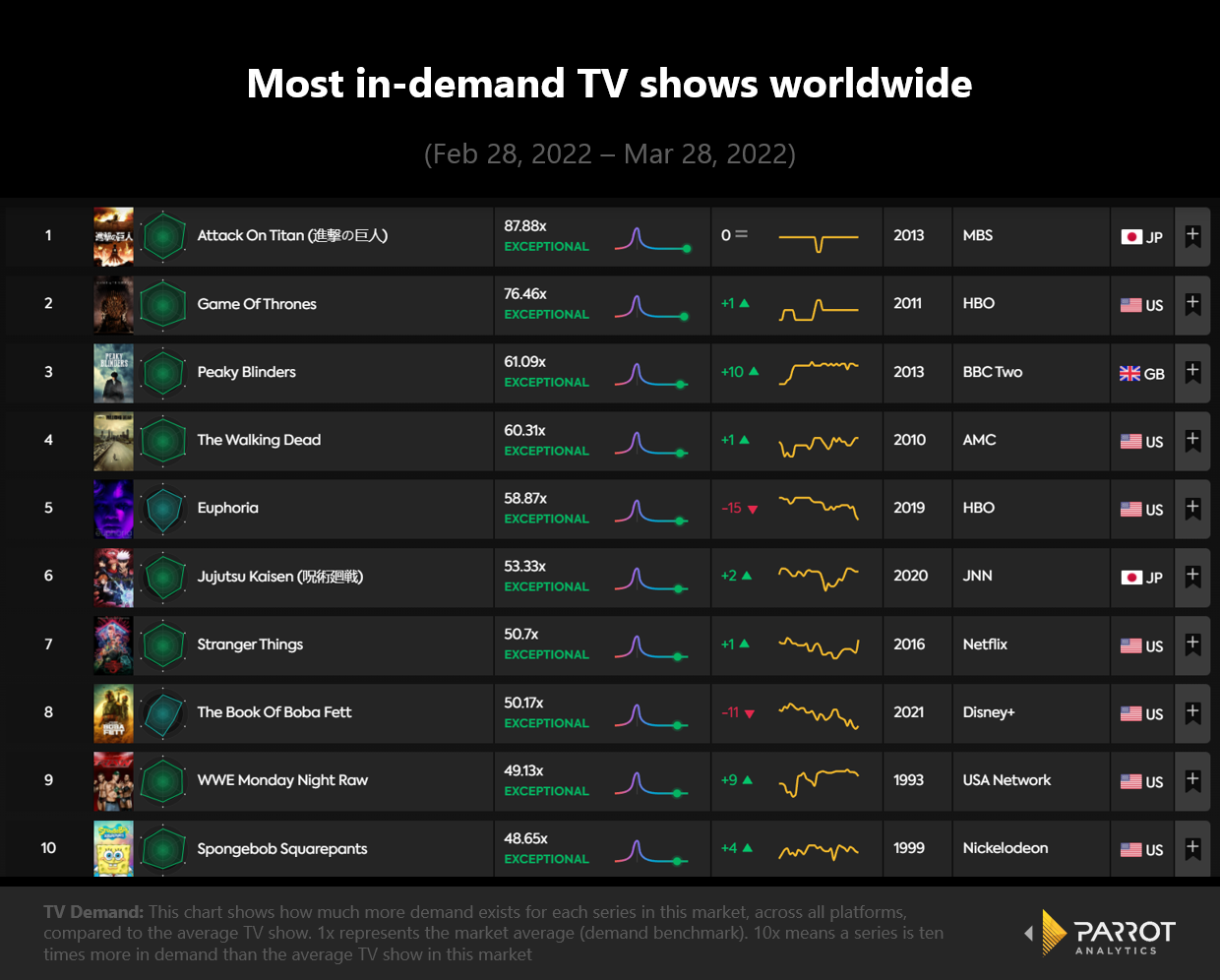 Demand measures the total audience interest expressed for a title compared to the average TV show. In the last thirty days, the most in-demand series worldwide was Japan’s MBS anime Attack On Titan, with 87.8x the demand average.

Looking further into the data, we find that the United States has the most demand for the show, followed by the Japanese and French markets. 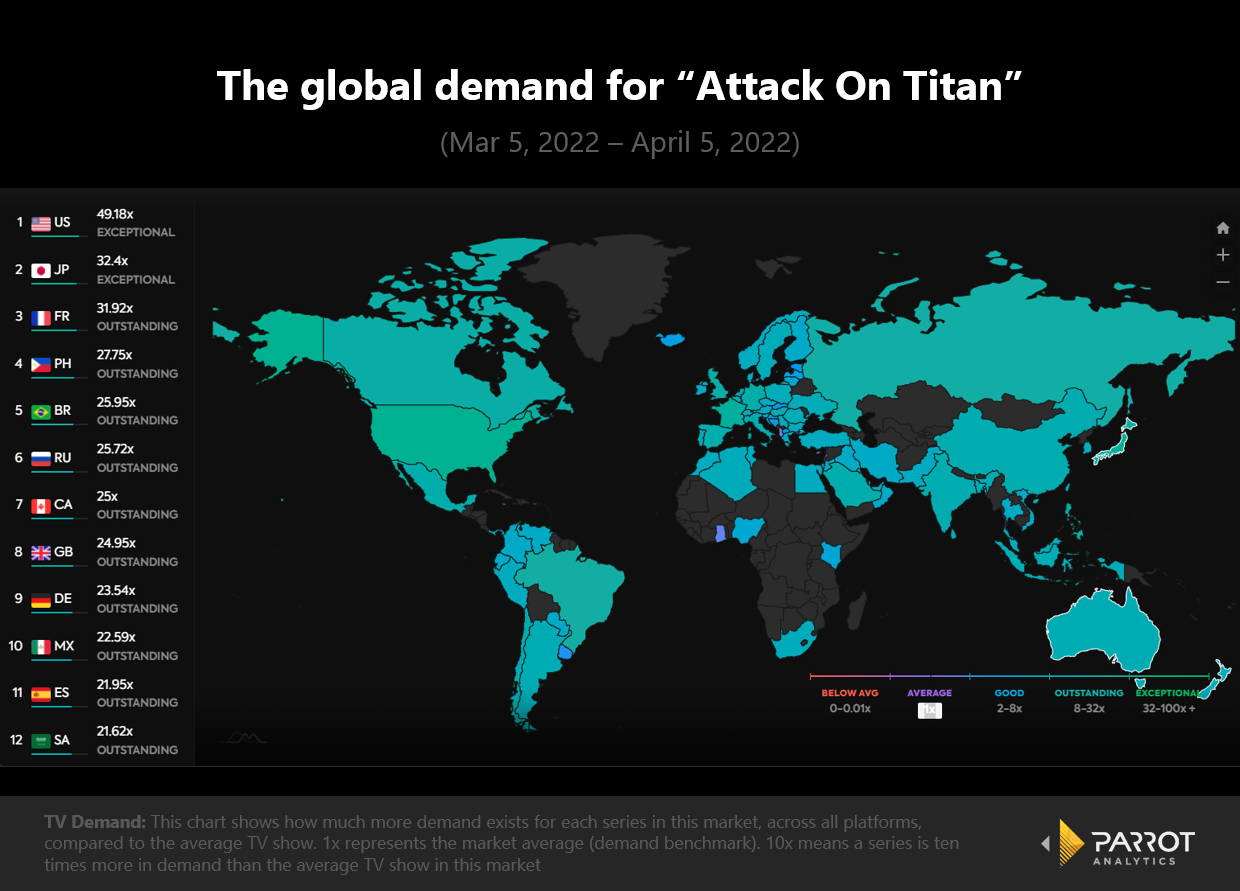 According to the Global Heatmap for Attack On Titan, the anime had 49.1x the demand average in the U.S, in the period between March 5th and April 5th. It had 32.4x the average in Japan and 31.9x in France, for the same period. Furthermore, according to Parrot Analytics data, Attack On Titan ranks no.1 this year in France, Japan, Philippines, Brazil, Russia, Canada, Germany and Spain.

Back to the worldwide demand chart, both HBO’s Game of Thrones and Euphoria ranked high. Game Of Thrones was the second most popular worldwide for the period, with 76.4x the average, while HBO’s Euphoria recorded 58.8x the average series demand.

BBC One’s Peaky Blinders was the third most popular show, with 61x the demand average. The interest in the show is likely propelled by the airing of its sixth season on February 27th.  Netflix’s Stranger Things was the seventh most in-demand show worldwide for the period, with 50.7x the demand average. 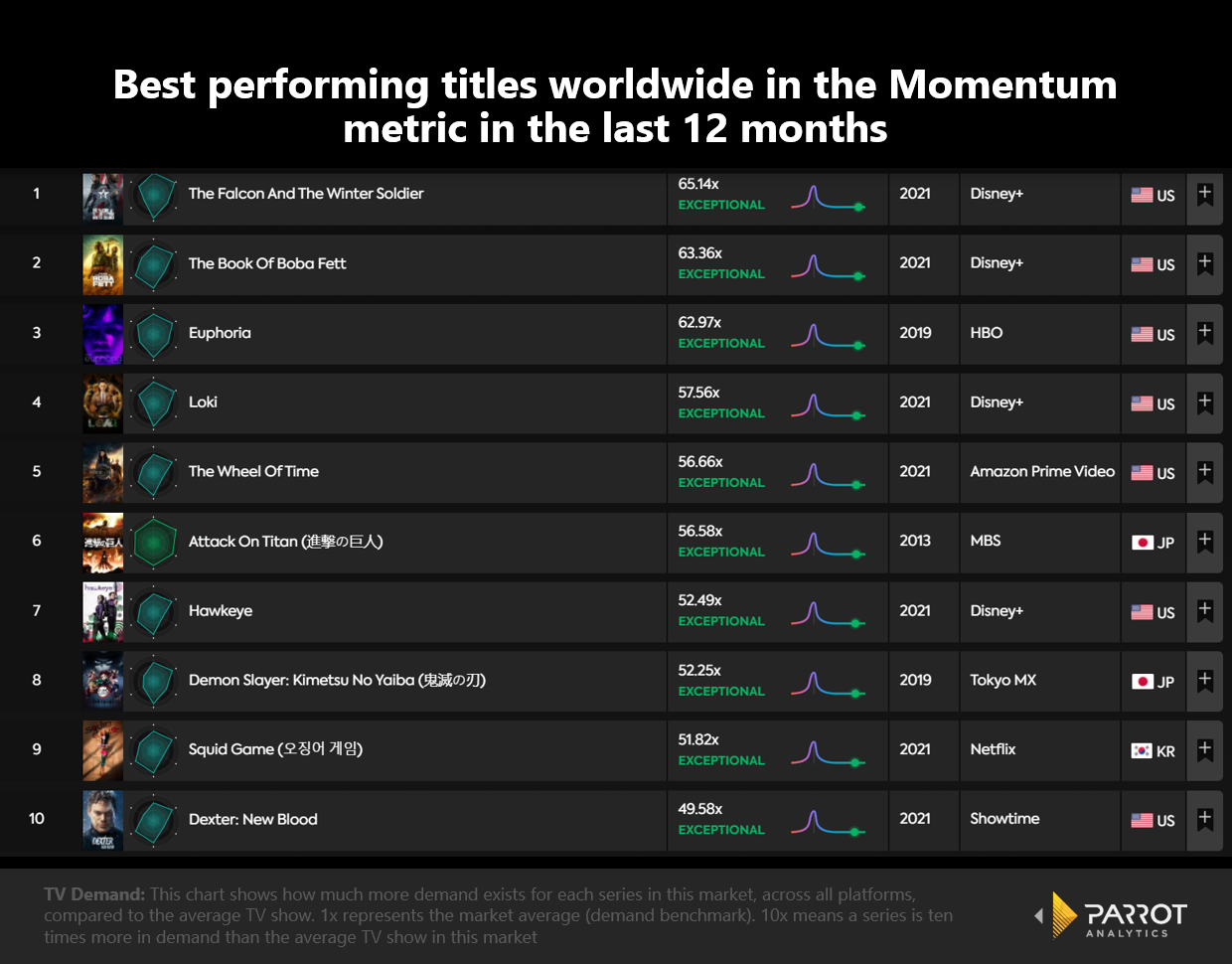 The Momentum metric measures the rate of growth in demand over the past 12 months as compared to the average title. Titles with the most Momentum worldwide are often shows that have debuted or released new seasons in that period.

With the release of the show’s second season in 2022, HBO’s Euphoria had the third most Momentum for the period, with 62.9x the average. In tandem, Netflix’s Squid Game, the Korean show that smashed all records last year, was number eight in the Momentum index with 51.8x the average. Finally, Showtime’s Dexter: New Blood, a sequel to Dexter released in 2021, rounded out the rank at 49.5x the average.

The high score in the Momentum metric by The Falcon and The Winter Soldier is supported by its good performance in diverse markets. 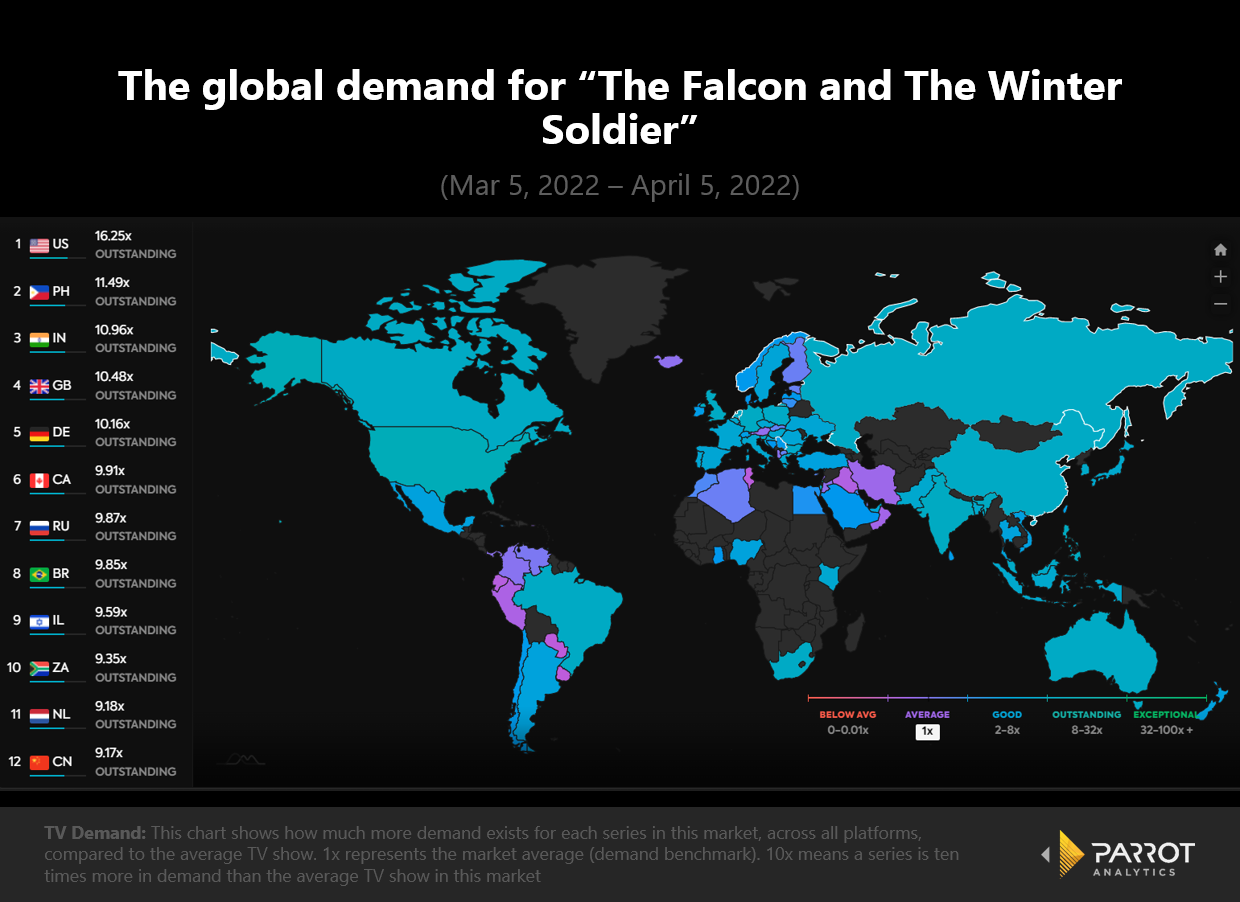 In the period between March 5th and April 5th, the show performed best in the U.S, the Philippines, and India. The fourth best market for series was the U.K., where it had 10.4x the average series demand. 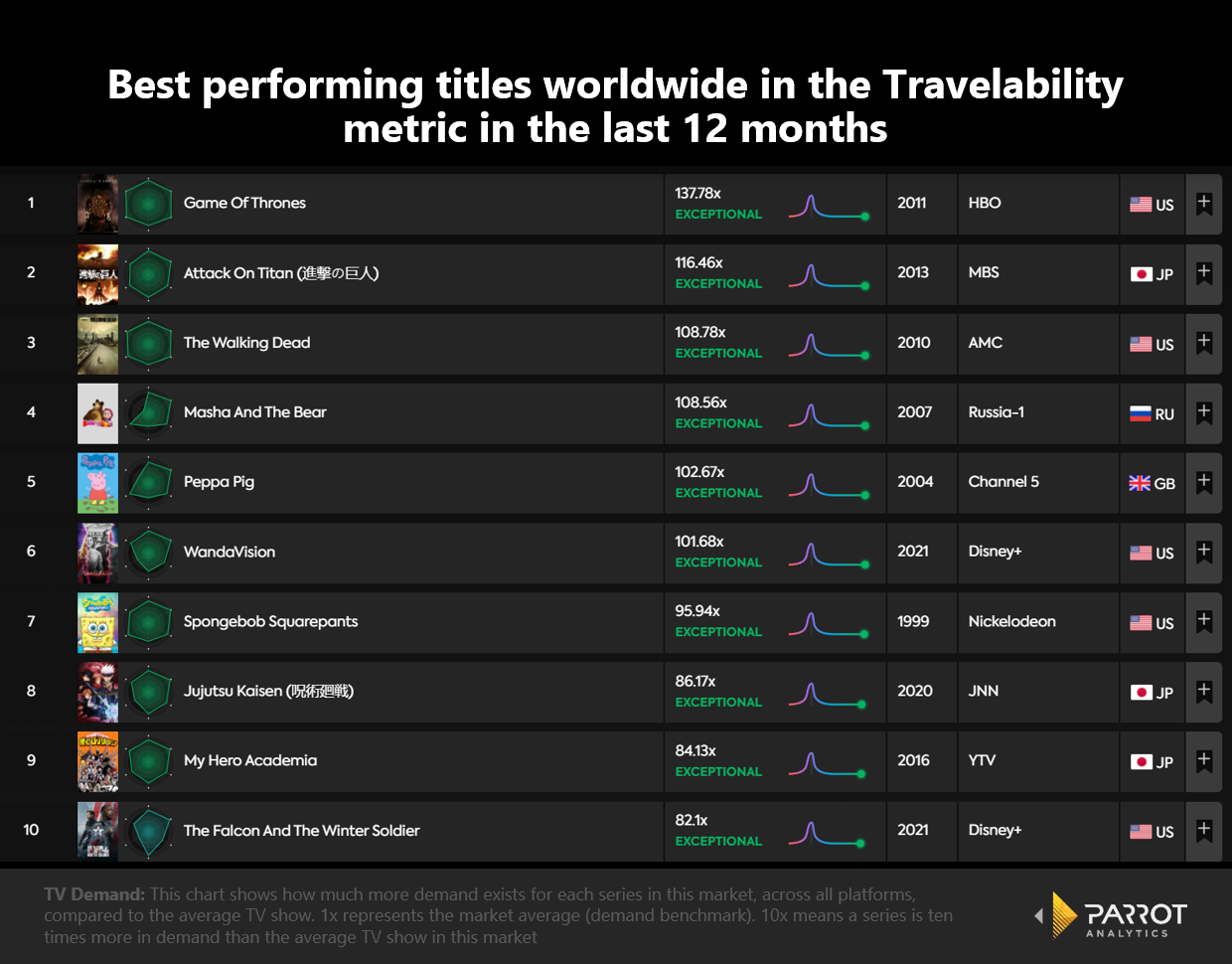 HBO’s Game of Thrones leads the metric, with 137.7x the average. To better understand how such a high Travelability score translates into demand in different markets, we can look at the Global Heatmap for the show. 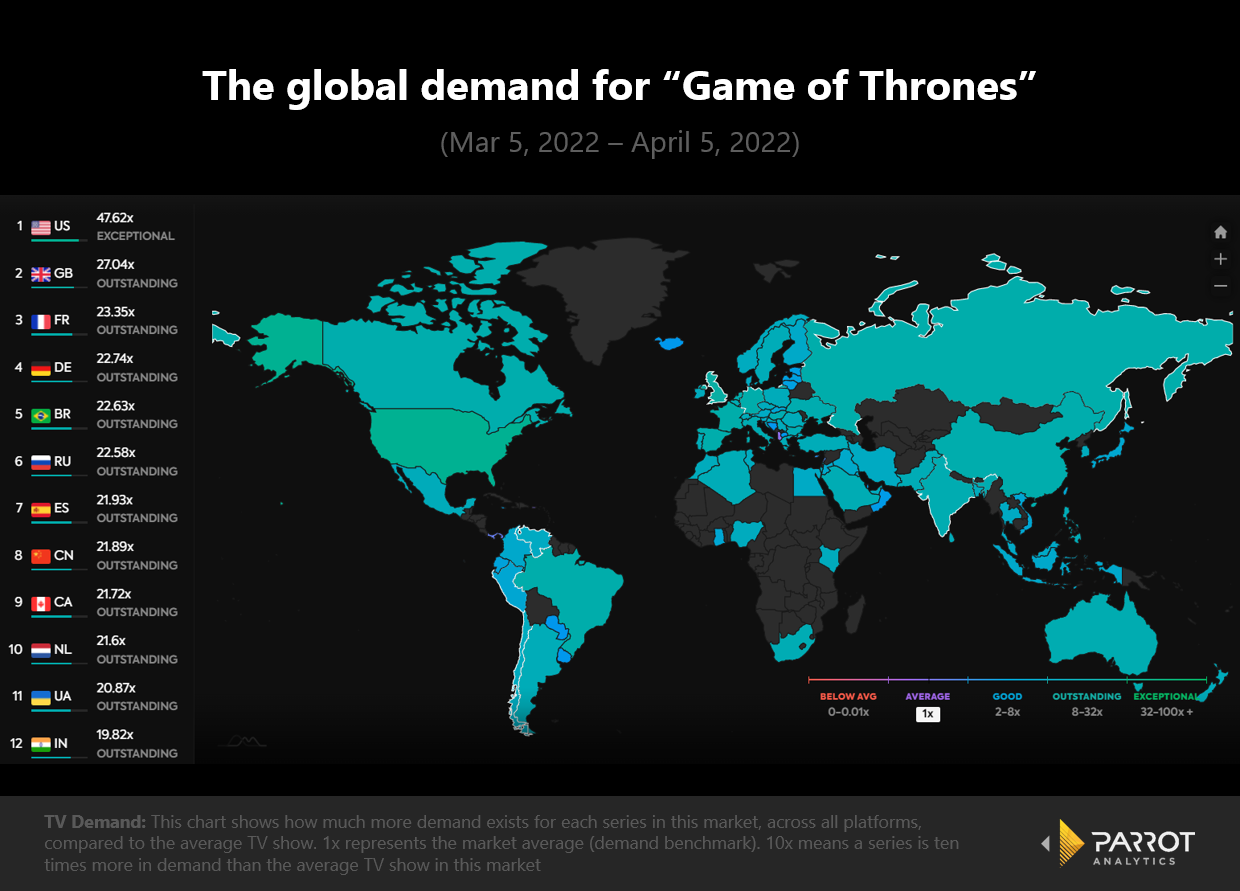 Additionally, according to Parrot Analytics data, Game of Thrones ranks first this year in Germany, Spain and Ukraine.

Finally, the index indicated the prevalence of two children’s shows: Channel 5’s Peppa Pig and Russia-1’s Masha and the Bear. The shows had 108.5x and 102.6x the demand average, respectively. 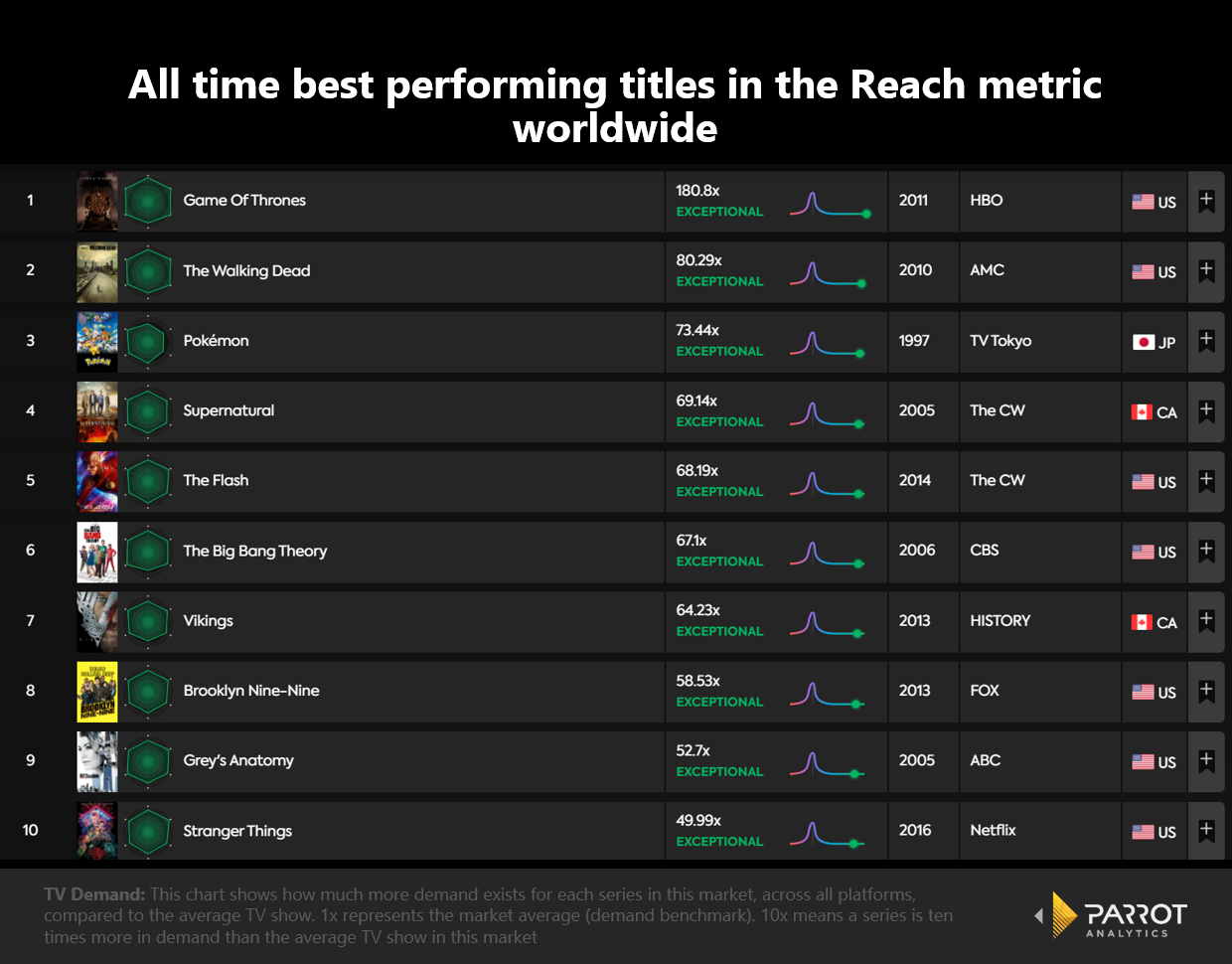 The Reach metric reflects the number of people expressing demand for a title. It helps in understanding whether a title appeals to a wide group of people, or relies on a small, passionate fanbase. The data also gives insight into the probability that a title will attract new subscribers to a platform, based on how wide its appeal is.

Looking at the chart, we find that a majority of the shows are not streaming originals. Rather, broadcast TV is dominant here. The chart indicates all-time worldwide Reach.

HBO’s Game of Thrones and AMC’s The Walking Dead occupy numbers one and two in the chart, having earned 180.8x and 80.2x the demand average, respectively.

The CW’s Supernatural had 691x the average, while CBS’ The Big Bang Theory had 67.1x the average. Finally, ABC’s Grey’s Anatomy received 52.7x the demand average. All three series aired for over ten seasons.

The only streaming original in the chart is Netflix’s Stranger Things, with 49.9x the demand average. The show is also the newest title included, having debuted in 2016. 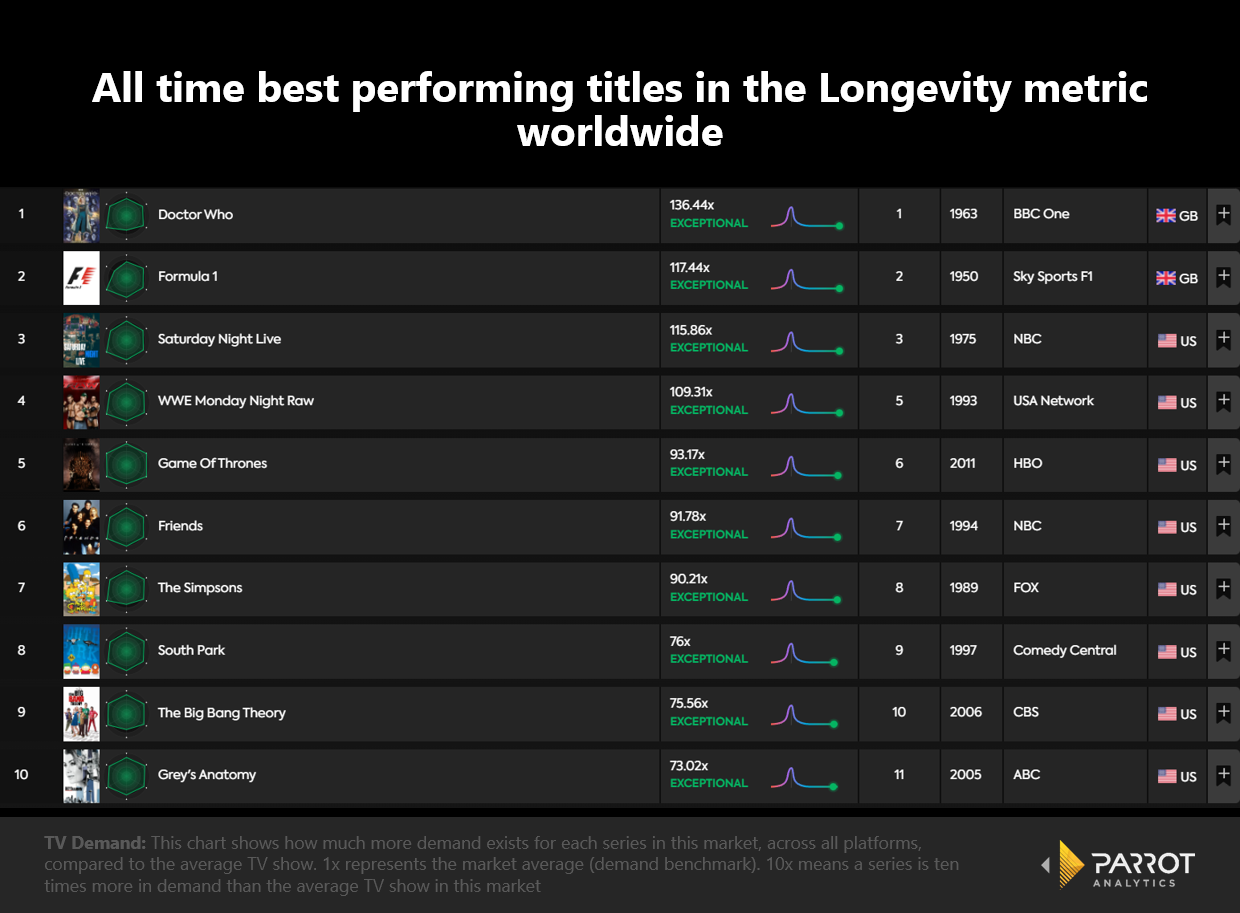 Longevity measures how well the demand performance of a title is maintained over time. The chart indicates all-time worldwide Longevity.

The three best-performing TV shows in Longevity were long-standing BBC One’s Doctor Who NBC’s Saturday Night Live and Sky Sports’ Formula 1. The British sci-fi show, that has accumulated 39 seasons from different incarnations airing since 1963, earned 136.4x the demand average for the period. Meanwhile, NBC’s comedy program, which has aired 47 seasons since its launch in 1975, recorded 115.8x. Lastly, Formula 1, which has been broadcast since it's inception in 1950, received 117.4x the demand average in the analysed period.

It is worth noting that the biggest three markets for Doctor Who, the leading series in the Longevity index, are English-speaking countries.

Furthermore, the chart presented some crossover with the Reach index. For instance, it includes HBO’s Game of Thrones and CBS’ The Big Bang Theory. The former recorded 93.1x, while the latter had 75.5x the demand average.

In the bottom half, four titles are long-running sitcoms. This is specially true about Fox’s The Simpsons and Comedy Central’s South Park - animated comedy series that have run for 33 and 25 seasons, respectively. While The Simpsons received 90.2x the demand average over the period, South Park earned 76x. 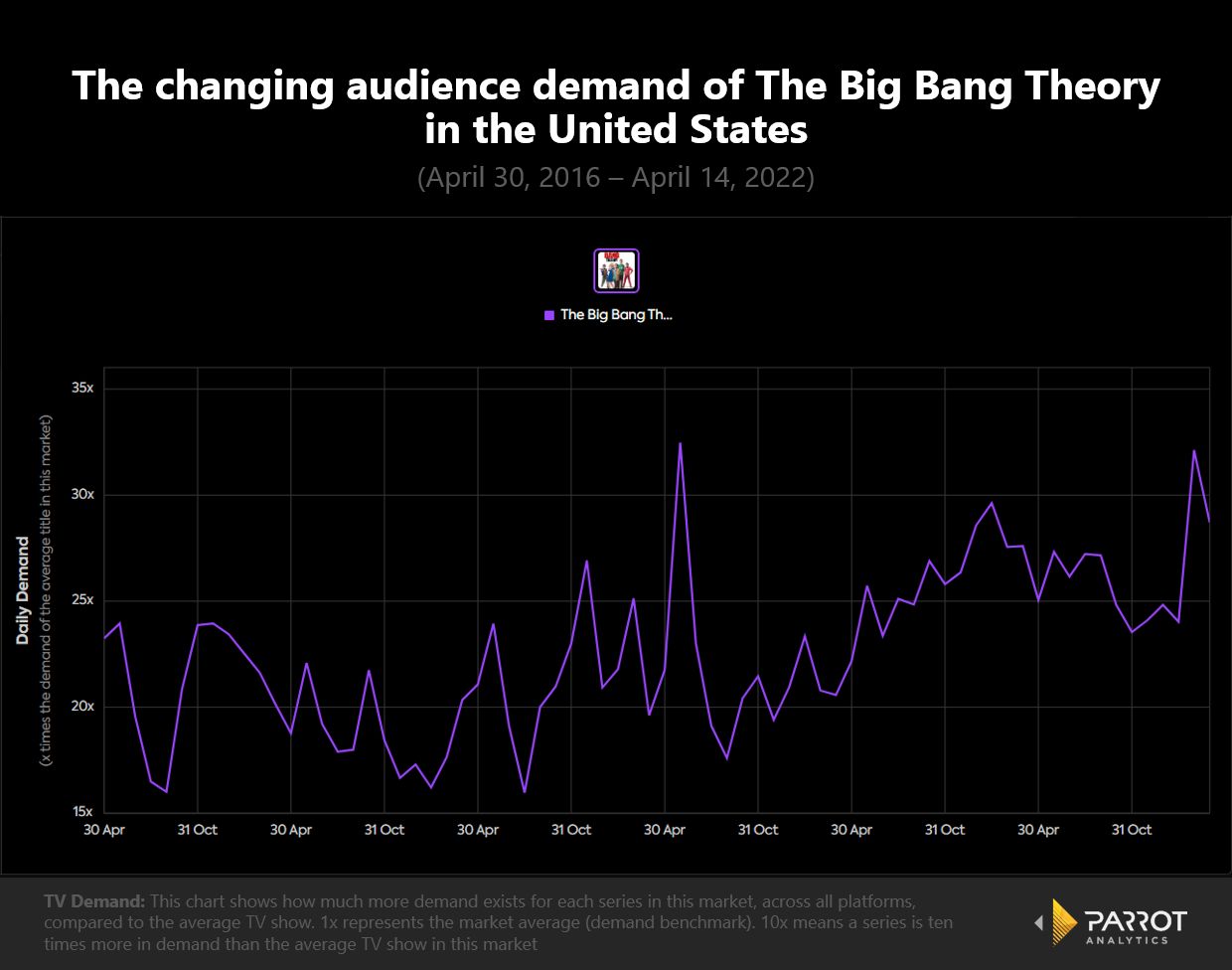 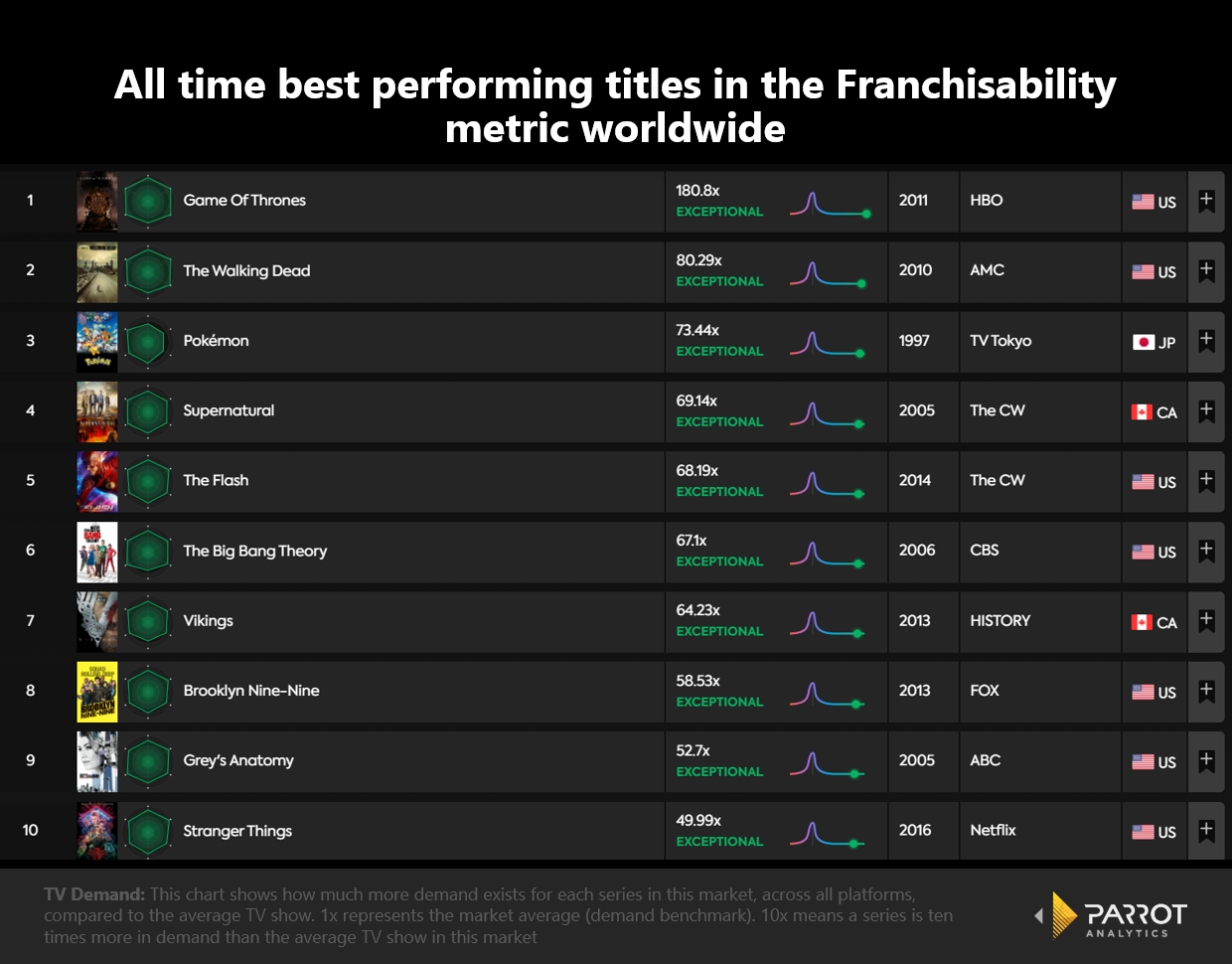 The Franchisability index indicates the spin-off potential of a title. It measures the endurance of demand for a title, and the variety of interests expressed in its audience. These metrics converge to reflect whether or not people will be interested in a new, but connected storyline. The chart indicates all-time worldwide Franchisability.

Therefore, the Franchisability chart is an amalgamation of titles present in other charts. For instance, this is yet another metric led by HBO’s Game of Thrones and AMC’s The Walking Dead. The series respectively registered 182.7x and 90.9x the demand average in the index.

Out of the shows that recorded high rates Franchisability, most have already generated spinoffs.

Vikings' recently launched Vikings: Valhalla, which picks up the story 100 years after where the original series left off, being one example. Other shows with spinoff series include Grey's Anatomy, with Private Practice and Station 19, The Big Bang Theory, with Young Sheldon, and The Flash, with Legends of Tomorrow. The Walking Dead generated Fear of the Walking Dead and The Walking Dead: World Beyond. Finally, Pokemon has nunerous spinoffs, including The Pokemon Chronicles and different Pokemon news shows.

On the other hand, Stranger Things and Brooklyn 99 haven't yet produced spinoffs.

The first Game of Thrones spinoff, The House of the Dragon, is scheduled to debut on August 21st, 2022. The series will tell the story of the Targaryen civil war set close to 300 years before the original series, and will air on HBO.

Some shows that performed well in Longevity also performed well here. These include USA Network’s WWE Monday Night Raw, with 59.4x, Fox’s The Simpsons, with 50.7x and NBC’s Friends, with 50.2x the demand average. This demonstrates that shows with robust and lasting audience demand are more capable of generating interest for spinoffs.

In tandem, some shows performed well in Travelability and other metrics are also on the chart. These include Nickelodeon’s Spongebob SquarePants, with 53.5x, and MBS’ Attack On Titan, with 50.1x the demand average.

Overall, the most well-rounded shows according to The Pulse metrics are HBO’S Game of Thrones and AMC’s The Walking Dead. Furthermore, Fox’s The Simpsons and Nickelodeon’s SpongeBob SquarePants also performed well in multiple metrics.

While streaming originals dominated in the Momentum metric, broadcast TV still prevails in the Reach and Longevity indexes.

Finally, the Travelability index seemed to favor international content, such as Japanese animes, and children’s programs, genres which have both found success with global audiences.