Image: The Lord of the Rings: The Rings of Power, Amazon Prime Video 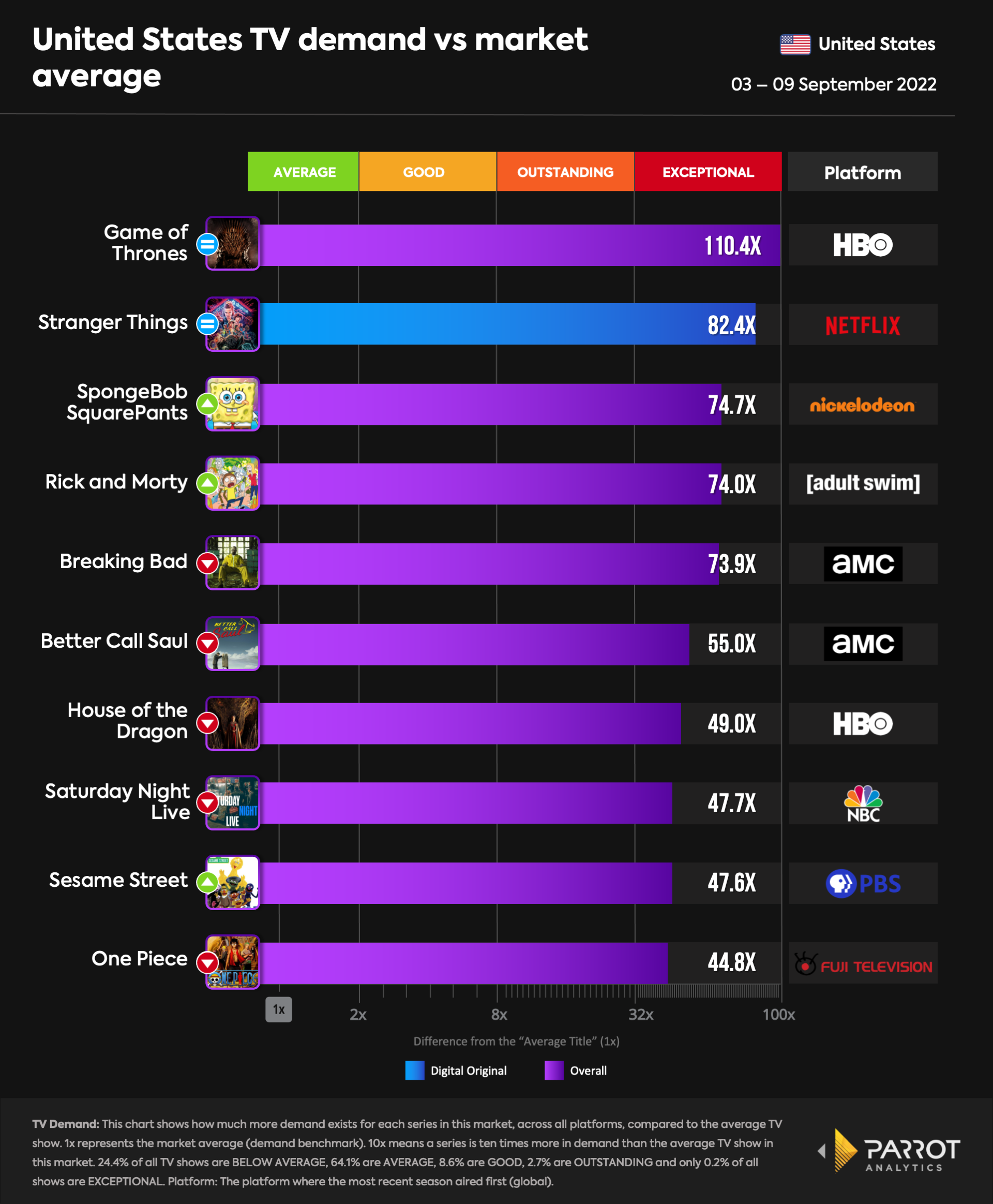 This week despite a 10% decline in demand, Game of Thrones remained the most in demand series with 110.4 times more demand than the average show in the U.S. It was followed by Stranger Things in second place with 82.4 times the average series demand – a solid performance by the sci-fi series, which aired its 6th season over two months ago.

Rick and Morty shot up to fourth place in the rankings as a result of a 52% increase in demand after its 6th season premiered on September 04. The animated sitcom had robust demand in this first week with 74 times more demand than the average series in the U.S. AMC’s Better Call Saul slid to sixth place in the rankings this week after a 14% decline in demand for the show and had 55 times the average series demand.

An interesting downward trend in demand was observed for House of the Dragon this week, despite being in the midst of releasing episodes. The 21% fall in demand could perhaps be attributed to the release of Prime Video’s The Lord of the Rings: The Rings of Power on September 02. Tolkien’s work holds a special place in the hearts of die-hard fantasy fans. It could be possible that audiences are focusing first on the Rings of Power, however it would be easier to know definitively if that is the case once more post release data comes in.

Rounding out the overall rankings we see One Piece in tenth place down from ninth place last week. The anime saw a 6% decline in demand this week, but managed to remain in the rankings with 44.8 times more demand than the average series. 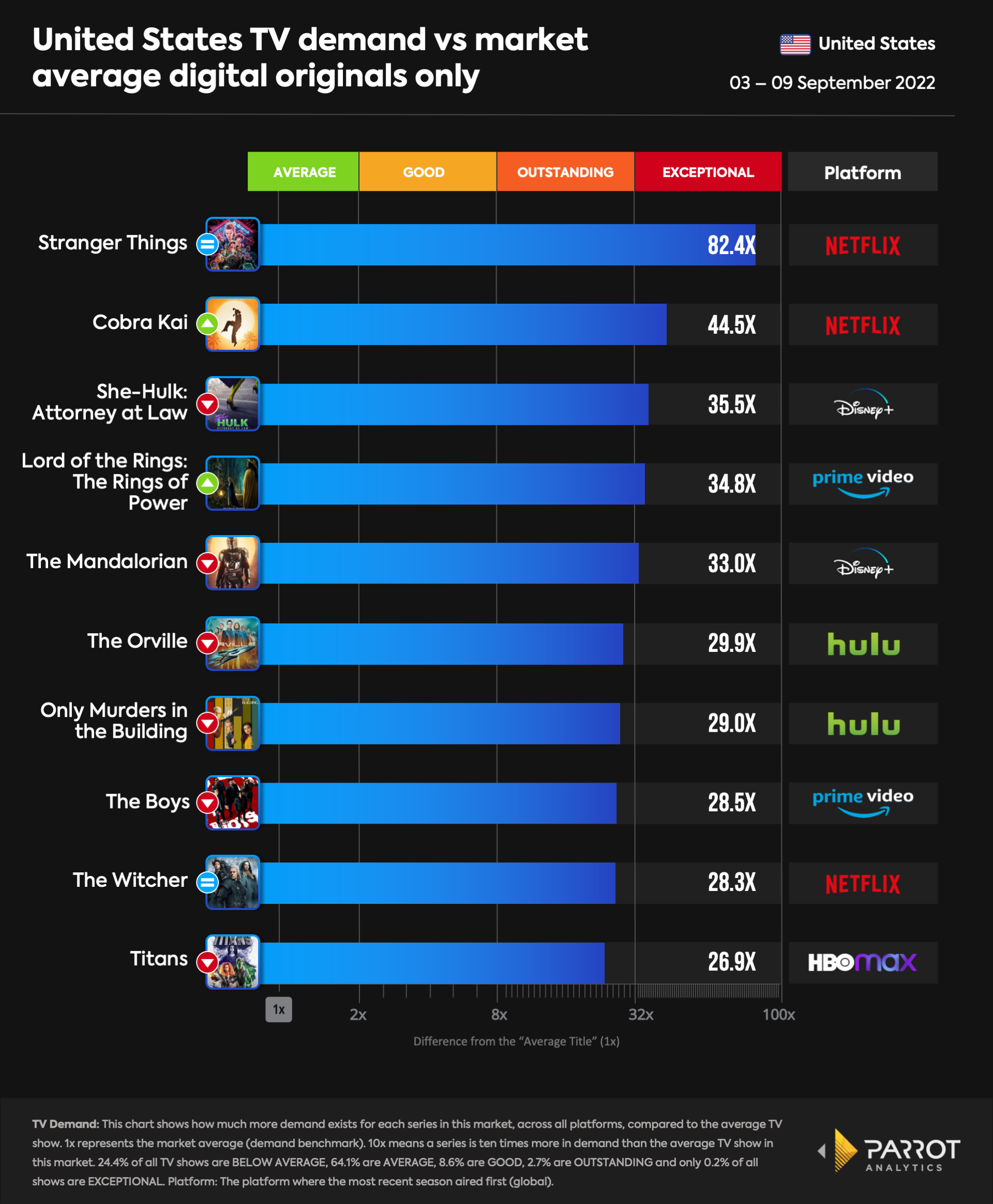 Stranger Things remained at the top of the streaming originals rankings for yet another week in a row with 82.4 times the average series demand, a minor 3% decline from last week. It was followed by Netflix’s Cobra Kai, which shot up to second place with a 49% increase in demand. The increase came as the Karate Kid spin-off premiered its 5th season on September 09. As a result, the show quickly became 44.5 times more in demand than the average series. It will be interesting to see if demand for the show will increase or remain stable next week or if audiences will quickly move on given all the exciting releases lately.

The Lord of the Rings: The Rings of Power was the clear winner of audience attention in the United States this week. The series had a 163% surge in demand and took fourth place in the rankings with 34.8 times the average series demand. The show is quite the gamble for Amazon since it spent $700 million on the first season alone, making The Rings of Power officially the most expensive TV show ever. Taking such a colossal swing does come with inherent risks, and it remains to be seen how this move will work out for the streamer after the show completes its first season.

Disney+’s The Mandalorian also had a 7% in demand which seems to be the direct result of Lucasfilm’s many revelations at the recent D23 Expo 2022, including a season 3 trailer for the streamer’s flagship Star Wars show. As news of these updates begin to spread out among fans over the next week, it is likely that we will see many spikes in demand for interrelated Star Wars shows. In ninth place this week we see Netflix’s The Witcher with an 8% increase in demand. The series recently wrapped filming for its 3rd season, as announced by director Bola Ogun and Henry Cavill. Since there hasn’t been an official release date yet, it’s likely that demand for the show will drop again next week. As of this week, The Witcher had 28.3 times the average series demand.