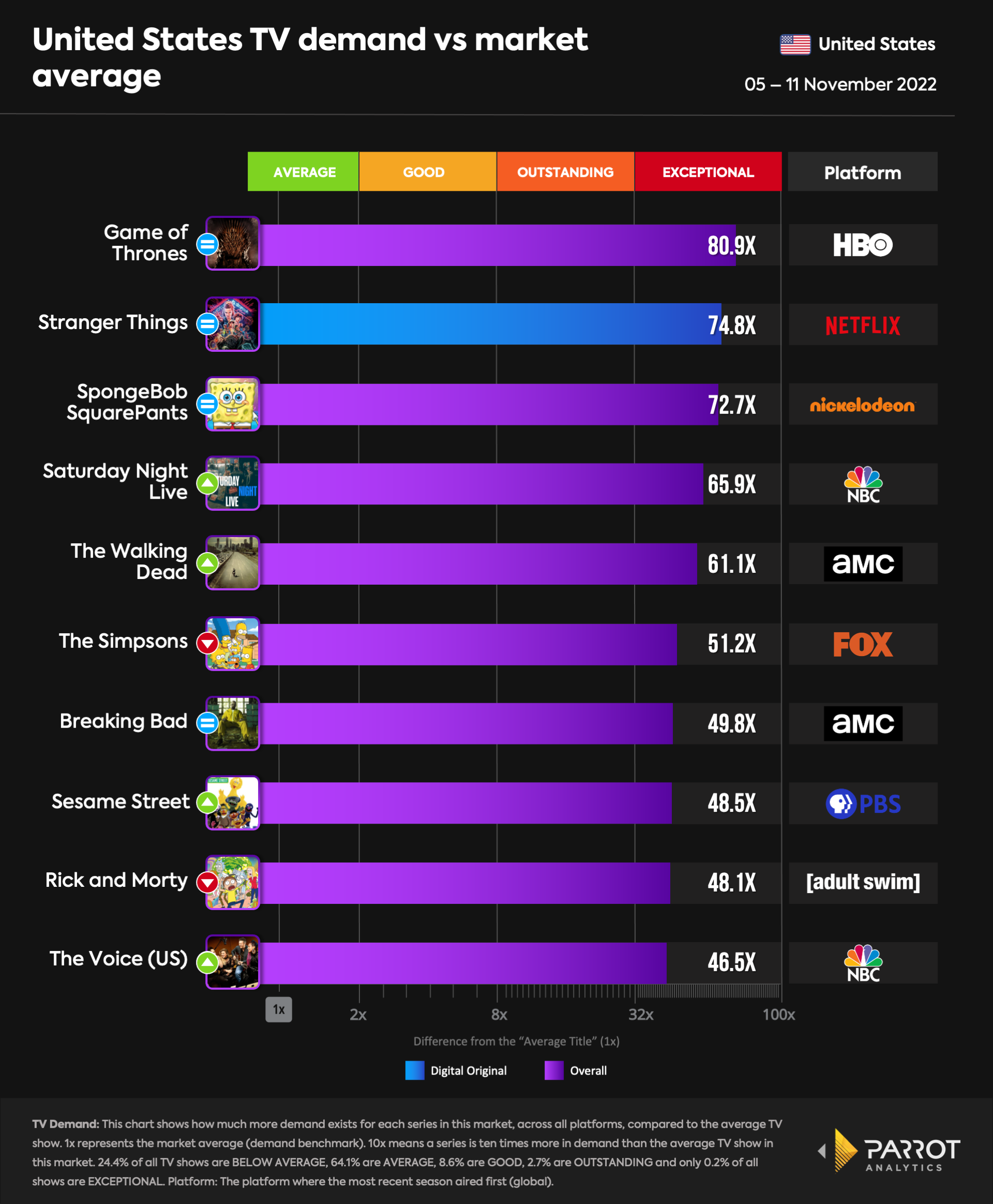 For the week of 05 - 11 November, while the overall shows rankings did not see any significant movement, the streaming originals rankings had a few notable shifts. Among overall shows Game of Thrones maintained its position at the top, but continued seeing a decline in demand this week as well. The show was still impressively 80.9 times more in-demand than the average series, but this was an 8% decline from its performance last week.

A 9% increase in demand saw Saturday Night Live move up yet another rank to grab fourth place on the chart this week. The increase in demand for the sketch-comedy series came as award-winning comedian Amy Schumer returned to host SNL for the third time on November 05. Following close behind SNL this week we saw The Walking Dead take fifth place in the rankings with 61.1 times the average series demand. The show had a minor 3% spike in demand ahead of airing its penultimate episode on November 13. The zombie drama series - which has been running since 2010 and has led to several successful spin-offs thanks to its popularity - is likely to climb higher up the rankings as it hurtles toward its series finale on November 20. AMC has also confirmed that the final episode run time will be extended in order to tie up the story well and give it an ending that does justice to the show.

PBS’s Sesame Street was back in the overall shows rankings this week with 48.5 times more demand than the average series, a 9% increase from last week. The increase in demand was a result of the show’s 53rd season premiering its first episode on November 03. The Voice (US) also made reappearance on the chart after a 7% increase in demand pushed it into the rankings in tenth place. The spike in demand for the series comes right as the live shows are set to begin on November 14. With a two-part finale scheduled to air on December 12 - 13, its very likely we will see the show reappearing in the rankings over the next few weeks. 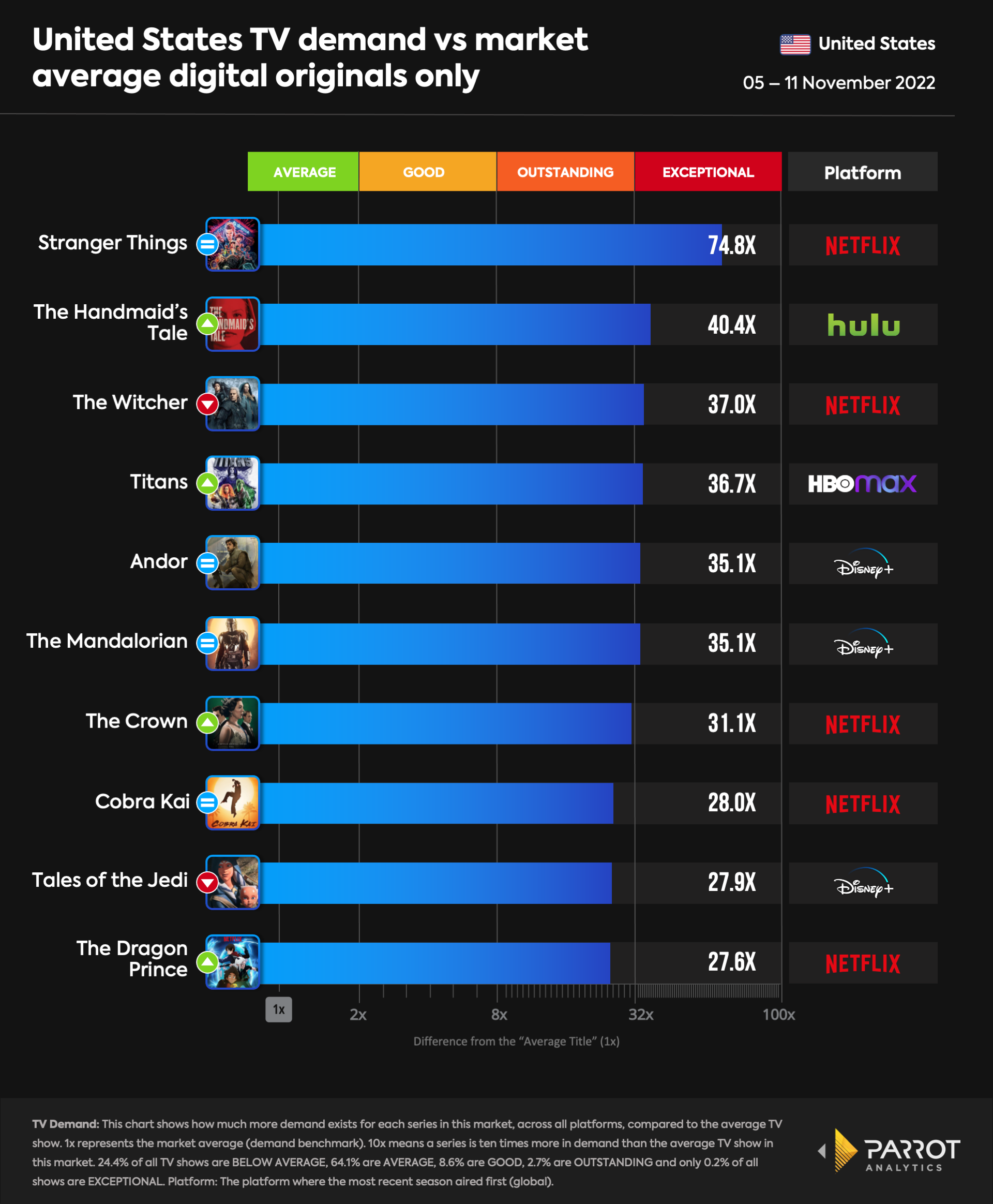 Among streaming originals rankings Stranger Things remained at the top of the chart with 74.8 times the average series demand, a minor decline from last week. Hulu’s The Handmaid’s Tale took over second place in the rankings after its season finale aired on November 09. Consequently, the show saw a 4% increase which made it 40.4 times more in demand than the average series in the U.S. this week.

HBO Max’s Titans is having a strong season premiere so far, with episode 3 of the latest season boosting demand for the series by 21% this week. The show surged up the rankings and took fourth place on the chart with 36.7 times the average series demand in the U.S. for the week. Disney+’s Andor and The Mandalorian both saw a slight increase in demand this week- 5% and 6% respectively. While increased interest in Andor occurred as a result of its 10th episode airing a few days ago on November 09, The Mandalorian’s spike in demand can be traced back to Lucasfilm and Studio Ghibli collaborating to create a surprise short for fans on the show’s anniversary. The short piece, titled “Grogu and Dust Bunnies” is meant to be all about Baby Yoda, and premiered on November 12 on Disney+. Considering the obsession that pop culture has had with Baby Yoda, the move is almost guaranteed to bring back quite a bit of audience interest in The Mandalorian and the adorable Grogu.

A 58% increase in demand saw The Crown come back into the rankings this week, quite expectedly. The fifth season of the show premiered on November 09, two years after the last season aired. Given that this was a hotly anticipated release, it is very likely we will continue seeing demand for The Crown rise next week too, as more fans catch up to the new season. As of this week, the show had 31.1 times more demand than the average series in the U.S. Rounding out the streaming originals rankings this week, we see another Netflix show - The Dragon Prince, climb up the list to grab tenth place on the chart. The Emmy award winning animated series’ fourth season premiered on November 03, returning to screens after a three-year hiatus. Just a few days later, demand for the series rose by 10%, making it 27.6 times more in demand than the average series in the U.S. this week. The show has already been renewed for three more seasons, and is set to conclude its story at the end of season 7.