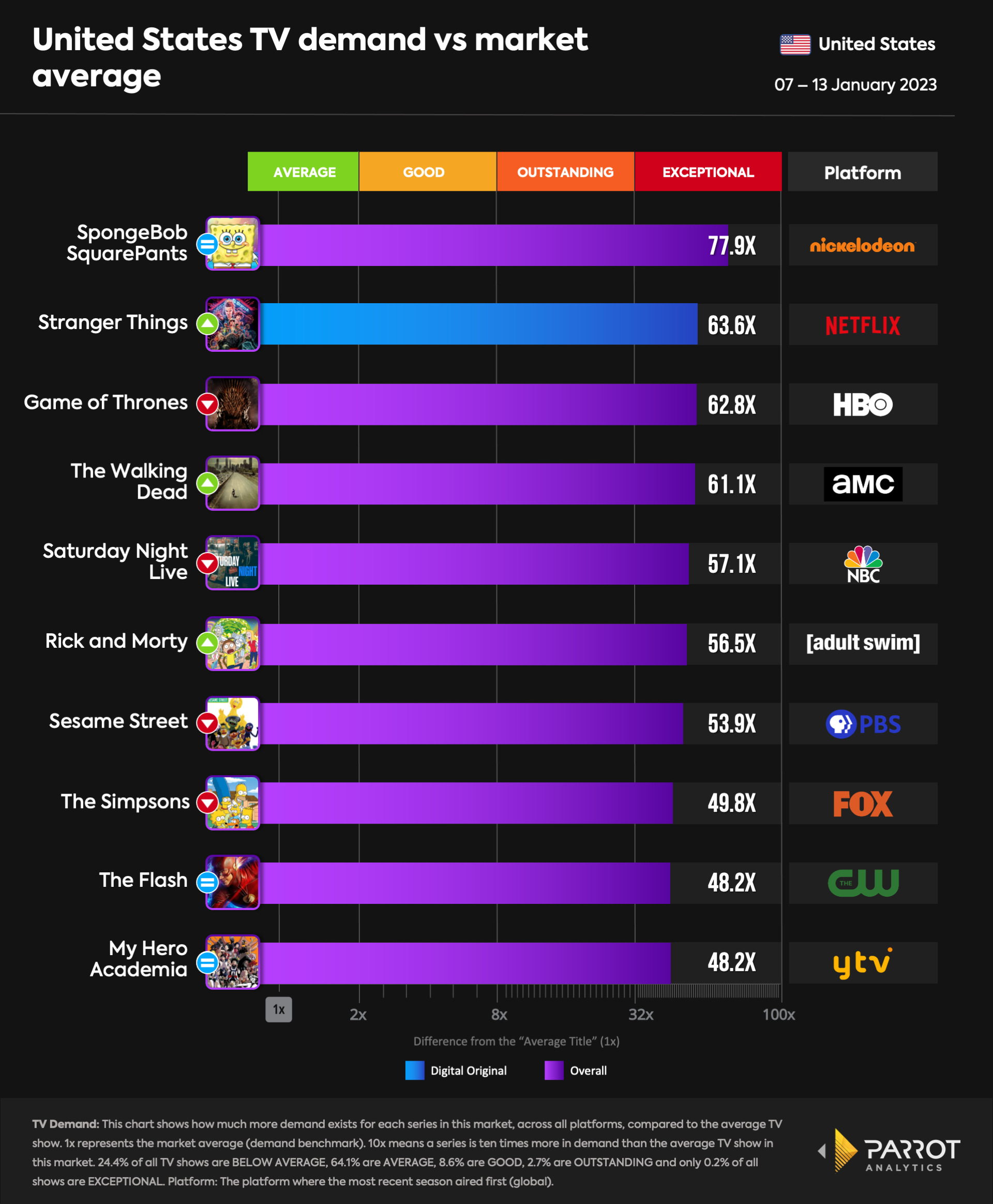 The week of 07 - 13 January saw SpongeBob SquarePants continuing to hold on to its position at the top of the overall shows ranking with 77.9 times the average series demand, almost the same as last week. Next on the chart is Netflix’s Stranger Things, whose dominion over the rankings shows no signs of slowing down with demand for the series seeing a negligible decline, but still had the show securing considerable audience attention with 63.6 times more demand than the average series.

The Walking Dead had a further 8% increase in demand this week, likely fuelled by AMC’s decision to set premiere timelines for three seasons of Walking Dead spin-offs releasing in 2023. The decision to reveal timelines for three new shows starring characters from the now-ended flagship series: duos Maggie (Lauren Cohan) and Negan (Jeffrey Dean Morgan), Michonne (Danai Gurira) and Rick Grimes (Andrew Lincoln), and the solo Daryl (Norman Reedus) also likely contributed to the uptick in demand for TWD which pushed it up to fourth place in the rankings this week, with 61.1 times the average series demand.

Adult Swim’s Rick and Morty had another 9% increase in demand which put it up to sixth place in the rankings with 56.5 times the average series demand. The Flash and My Hero Academia both held on to the same positions as last week, in ninth and tenth place. Both shows also had almost the same level of demand as well, with 48.2 times the average series demand. As mentioned last week, The Flash had an increase in demand after it was revealed that a few actors would return to reprise their roles in the series for the 9th and final season which is set to premiere on February 08. With the premiere date looming so close, it’s quite likely we will be seeing more of The Flash in the overall rankings over the next few weeks. 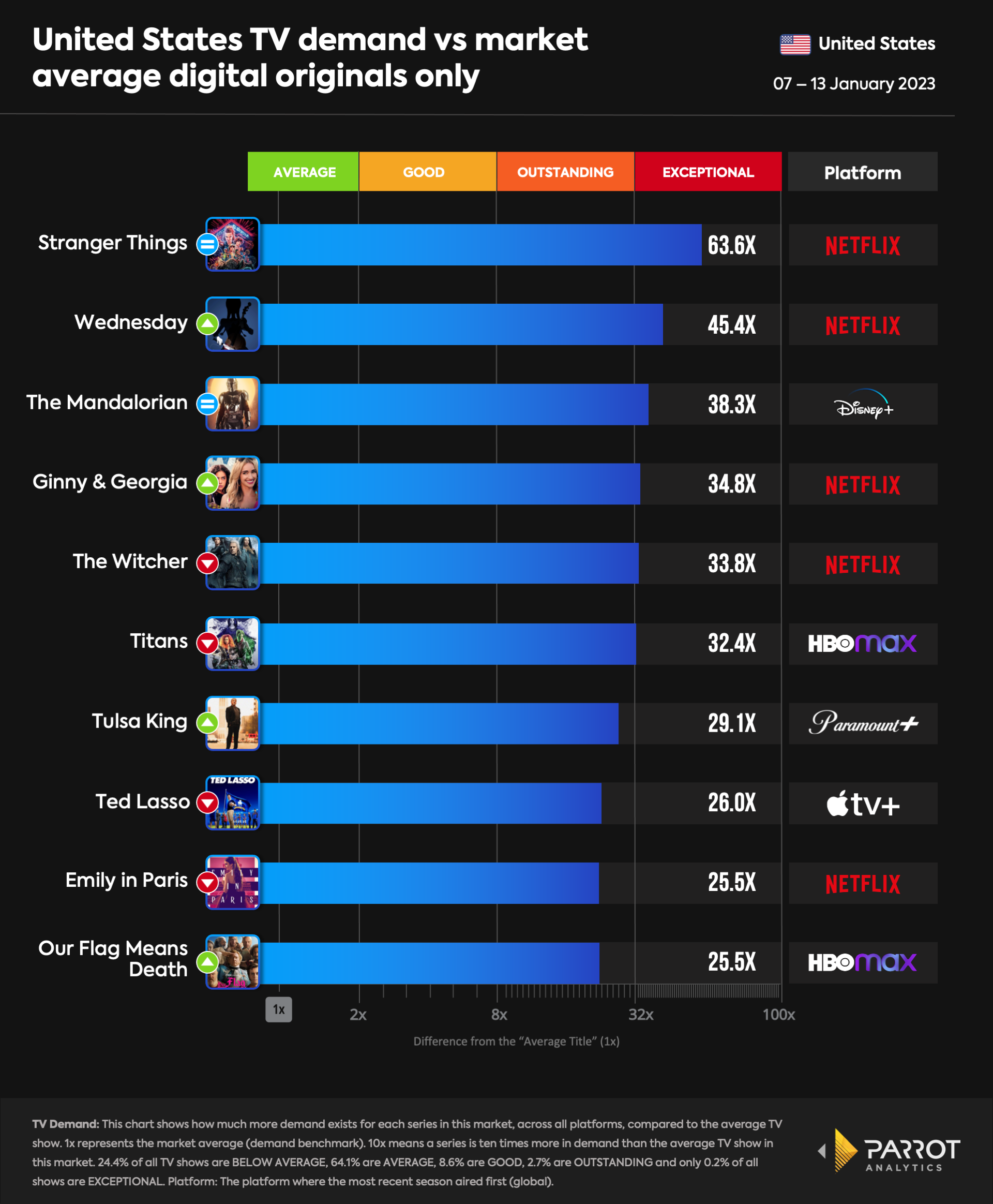 Among streaming original rankings, Netflix had a great week in terms of capturing audience attention in the U.S. Four of the top five originals that had a considerably high level of demand this week came from Netflix, with Wednesday shooting up in demand by 23% to take second place in the rankings right behind Stranger Things. The increase in demand for the show came right after the platform announced that it would be renewing the mega-hit series for another season. With good reason too, considering that this week it had 45.4 times more demand than the average series in the U.S. for the week.

Ginny & Georgia shot up the rankings to take fourth place this week with 34.8 times the average series demand, a whopping 116% increase that came after its second season premiered on January 05. While Netflix has not announced any plans to renew the series for another season just yet, looks like this one’s another successful show in the streamer’s growing catalog of recent hits. On the other hand, The Witcher saw a 12% drop in demand this week and slid down to fifth place in the rankings after an unsuccessful prequel premiere, which received largely mixed to negative reviews and left many wondering about the future of the Witcher franchise.

As predicted last week, Paramount+’s Tulsa King had a 10% jump in demand after the penultimate episode aired on January 08. Based on its current trajectory, it’s highly likely that the show will see an increase in audience attention over the next two weeks after the finale airs on January 15 and viewers catch up to it. Rounding out the top 10 streaming originals this week, we see HBO Max’s Our Flag Means Death back in the rankings this week with 25.5 times the average series demand, a slight 2% increase which pushed it up to tenth place in the rankings.