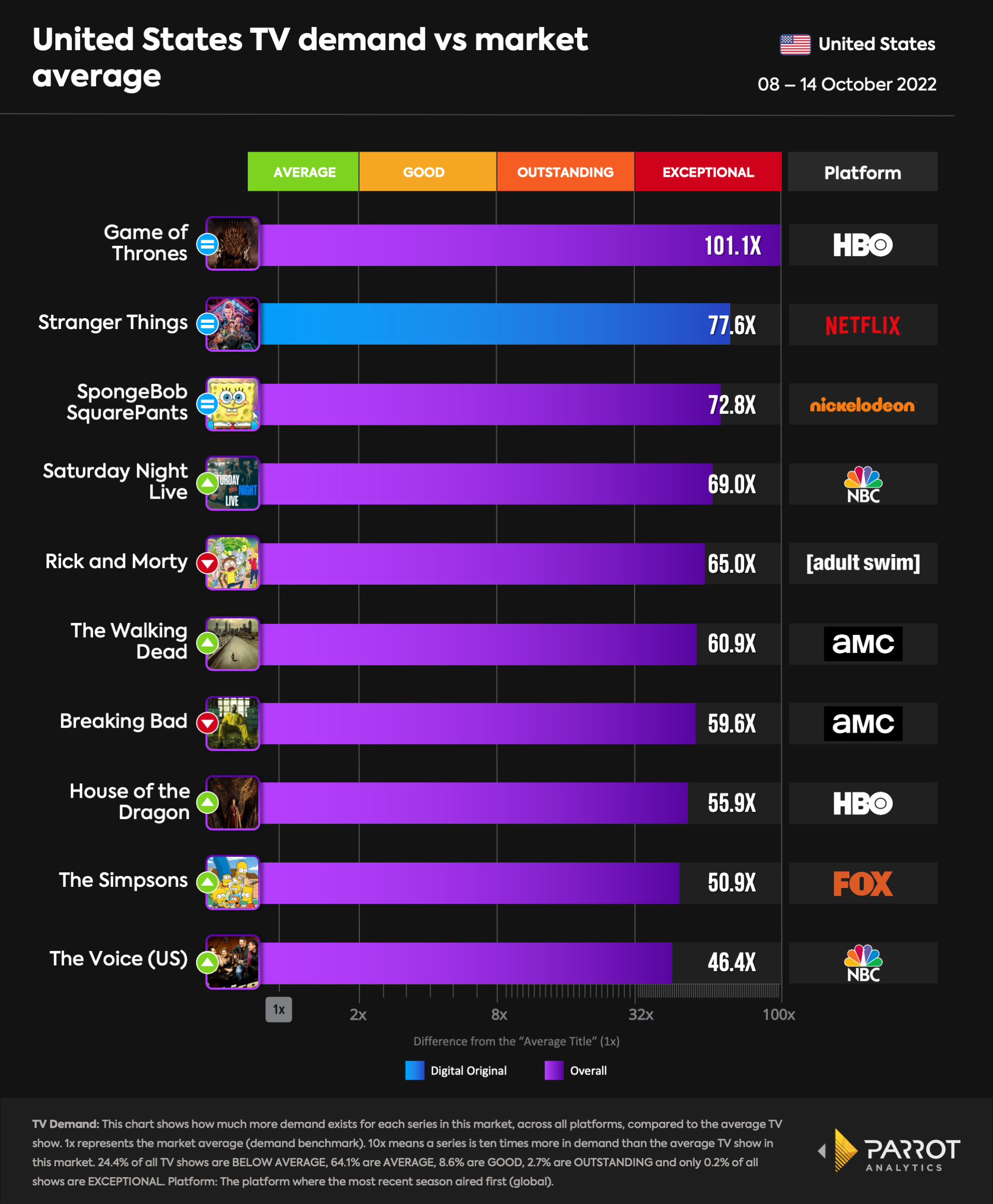 This week, October 08 - 14, there was quite a bit of movement observed in both the overall shows and streaming originals rankings. Game of Thrones remained at the top of the chart, with demand for the show growing to over 100 times the average series demand in the U.S. for the week. Saturday Night Live rose up to fourth place after a 12% boost saw it becoming 69 times more in demand than the average show pushing Rick and Morty down to fifth place this week.

The Walking Dead rose up another two spots this week and came sixth in the rankings as the show edges closer to its series finale. AMC’s Breaking Bad saw a double digit decline in demand and slid further down the rankings to seventh place this week. The series - which saw a surge in demand when its spin-off Better Call Saul began airing episodes from its season finale a few months ago - has been seeing a steady decline after the prequel ended on August 15.

House of the Dragon has begun seeing an increase in demand as the show aired its eighth episode this week, rising up to grab the eighth spot on the chart. With only two more episodes to go, it’s expected that audience interest will continue to lead to a surge in demand for the show. The Simpsons re-entered the rankings this week and took ninth place with 50.9 times the average series demand, a 9% increase from last week. Rounding out the overall rankings we see The Voice (US) entering the top 10s with 46.4 times the series demand. The show saw an 8% increase in demand this week as the battle rounds began on October 11. 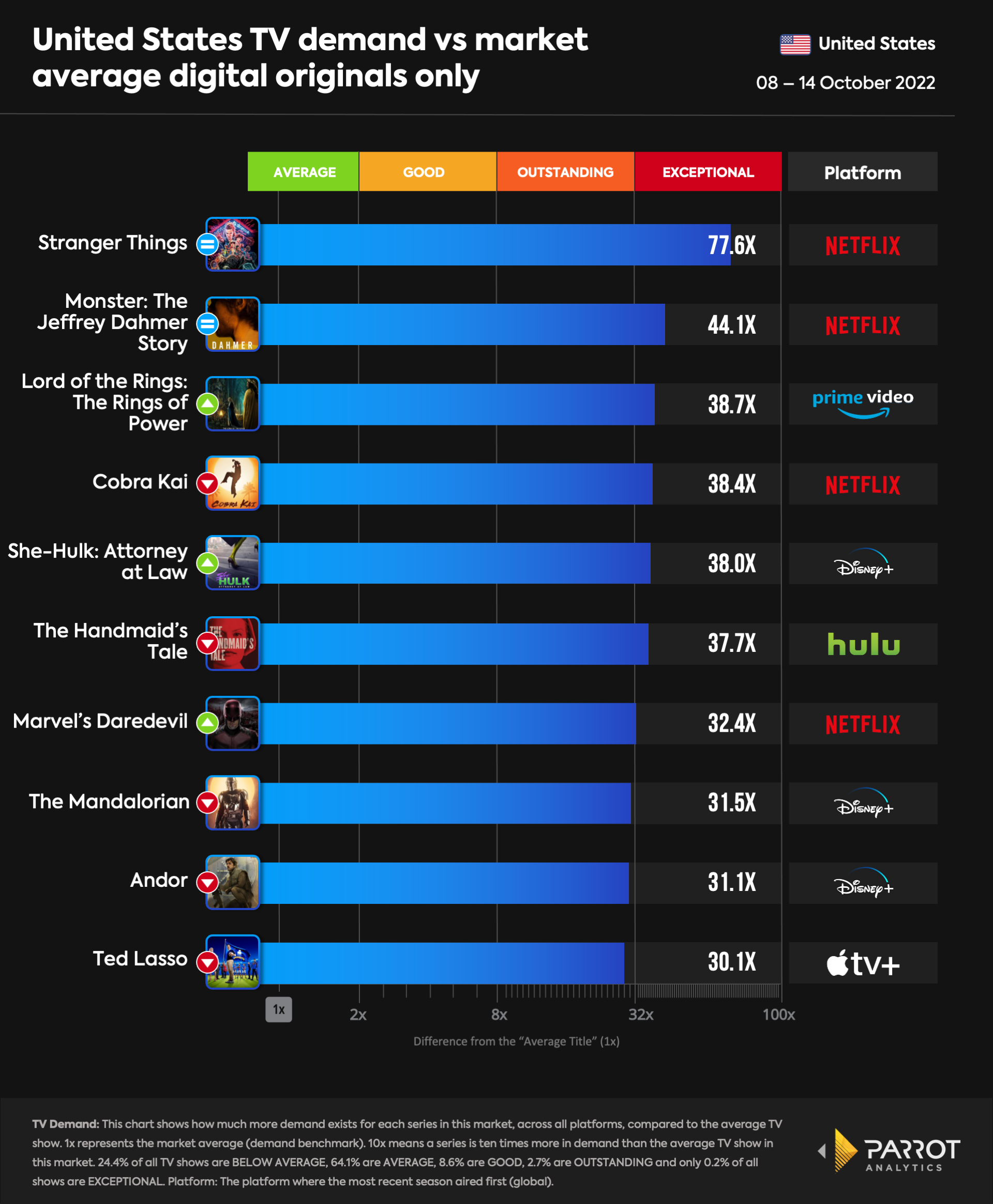 Despite a 4% decline, Stranger Things continued to maintain its wide lead over all other shows in the streaming originals rankings with 77.6 times more demand than the average series. It was followed by Netflix’s Monster: The Jeffrey Dahmer Story in second place with 44.1 times the average series demand, a 29% decline. The fall was a sharp contrast from its performance last week.

Amazon’s The Lord of the Rings: The Rings of Power had an impressive 24% surge this week, the result of its penultimate and final episodes airing on October 07 and October 14 respectively. It is likely that next week as more data on the finale episode comes in, we will see the show rise up further when fans catch up to it. As of this week, The Rings of Power had 38.7 times the average series demand and rose up to third place on the chart. She-Hulk: Attorney at Law also had a 14% increase in demand after its season finale aired on October 13, climbing up to fifth place in the rankings.

Hulu’s The Handmaid’s Tale dropped to sixth place despite a 6% increase in demand, likely the result of audience attention being divided up between the other shows this week. Marvel’s Daredevil also had a 33% increase this week, entering the rankings and grabbing seventh place in the chart with 32.4 times the average series demand. It was recently revealed that the series is going to have a reboot titled Daredevil: Born Again, with some Easter eggs being dropped in She-Hulk: Attorney at Law. Before the final credits rolled, the show brought Charlie Cox's Matt Murdock to the MCU fold, and has had Daredevil fans sitting up in interest as they await further news on the fate of the character within the MCU.