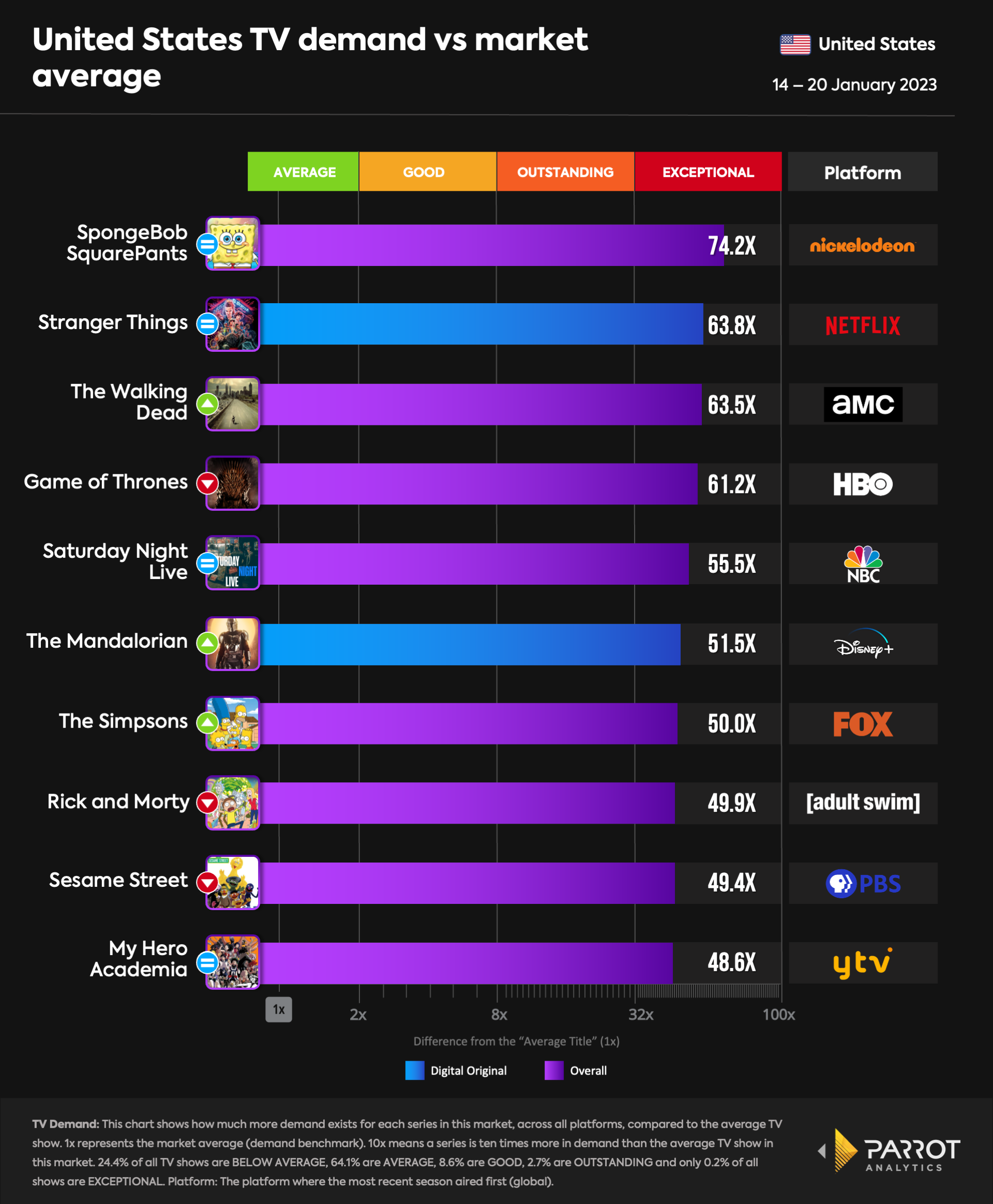 For the week of 14 - 20 January, while the overall shows rankings didn’t see too many changes, the streaming originals rankings did have some significant movements, making it evident that audience attention in the U.S. this week was mainly directed at the shows on that chart. Among overall shows however, the top two positions remained unchanged, although SpongeBob SquarePants did have a 5% decline in demand.

AMC’s The Walking Dead had 63.5 times the average series demand, a further 3% increase this week, pushing HBO’s Game of Thrones down to fourth place with 61.2 times the average series demand. Meanwhile, Saturday Night Live managed to hold on to its spot in fifth place with 55.5 times the demand average, a 3% decline from last week. Demand for Rick and Morty seems to have begun a downward trend, dropping by 11% this week as the show remains embroiled in controversy amid its co-creator’s recent scandal.

PBS’s Sesame Street also had an 8% decline and slid to ninth place in the ranking with 49.4 times the average series demand. The show is expected to seen an increase in demand as data begins to come in after their SeaWorld Orlando Kids Weekend on the 21st and 22nd, followed by Julia’s birthday on the 24th, and Elmo’s birthday celebration from January 28 - February 03. YTV’s My Hero Academia held on to its spot in tenth place for a third week in a row, with 48.6 times the average series demand, impressively almost the same level as last week. 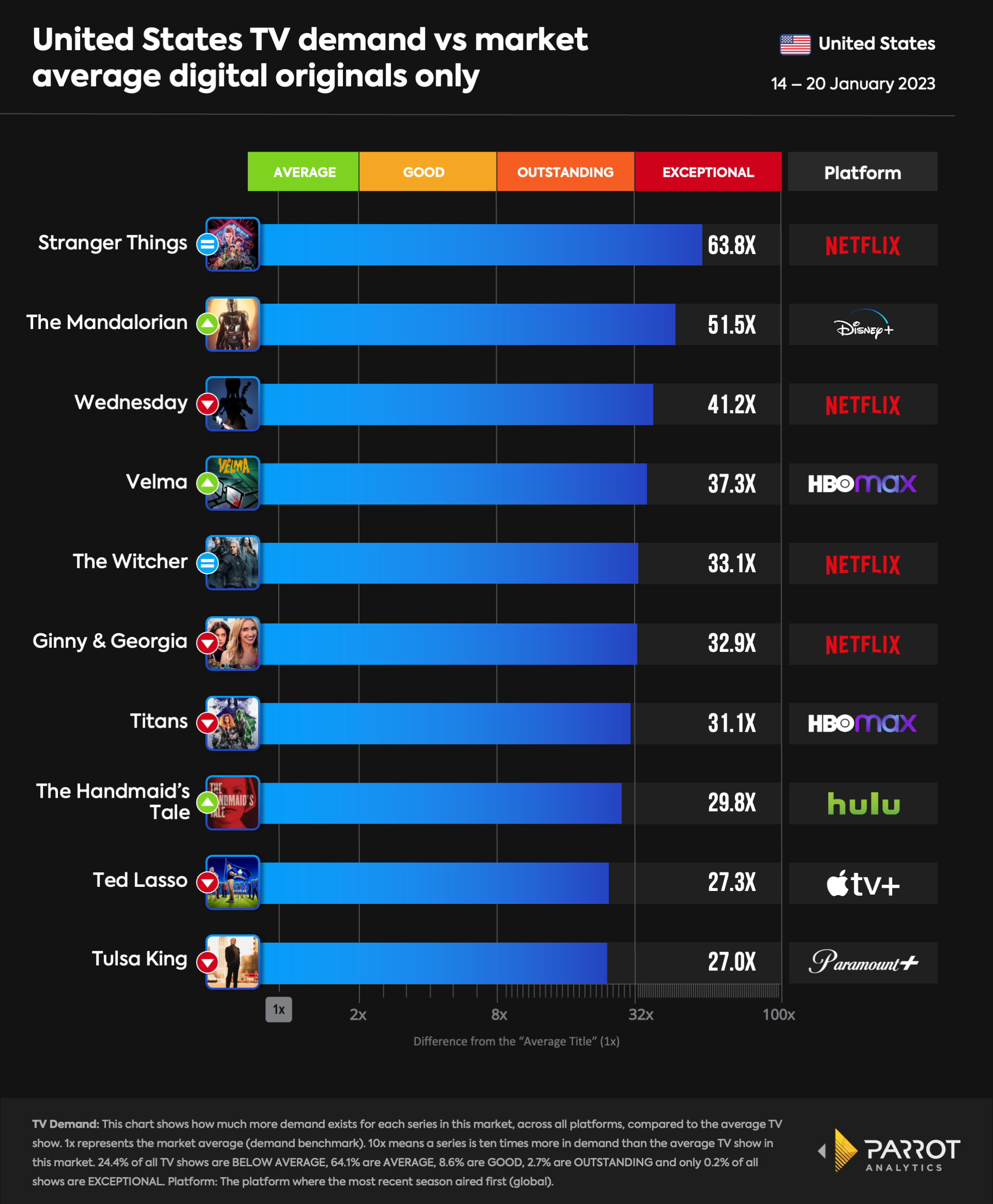 The streaming original chart had some interesting movements this week. Disney+’s The Mandalorian had a 34% increase and moved up to second place in the ranking with 51.5 times the average series demand. The spike in demand came right as LucasFilm released new footage for the upcoming third season of the show, which is set to be the first live-action Star Wars content of 2023. Right as the footage dropped, The Mandalorian instantly had an upward tick in audience attention, especially in the U.S. where it was 51.5 times more in demand than the average series for the week.

The most noticeable and significant change in demand this week was observed for HBO Max’s latest series, Velma, which premiered on January 12. The series has been on the receiving end of a lot of controversy, with Mindy Kaling (who voices the titular character) being criticised for the dialogue and the character itself. Regardless of the mixed opinions and online hate, (or perhaps because of them) the series seems to have drawn in enough eyeballs to become the fourth most in demand series in the U.S. this week, with 37.3 times the average series demand - a whopping 127% increase from last week.

Hulu’s The Handmaid’s Tale came back to the rankings this week, after a 17% increase in demand pushed it up to eighth place in the rankings with 29.8 times the average series demand. This is interesting because the increase in demand and audience interest in the show this week isn’t due to any new content being released. Rather, it seems to come in the lead-up to the 50th anniversary of Roe v. Wade on January 22, as Women’s March prepared to hold nation-wide rallies in order to focus on abortion rights. The Handmaid’s Tale - which centers around a dystopian world in which women are forced to reproduce children for the ruling class - is often linked to the Roe v. Wade reversal, with both the show and the book receiving more attention after the Supreme Court decision last year. Finally, we see demand for Ted Lasso increase by 5% this week, the result of an announcement that its third and final season is set to premiere in Spring 2023. As of this week, the series had 27.3 times the average series demand and took ninth place on the chart.