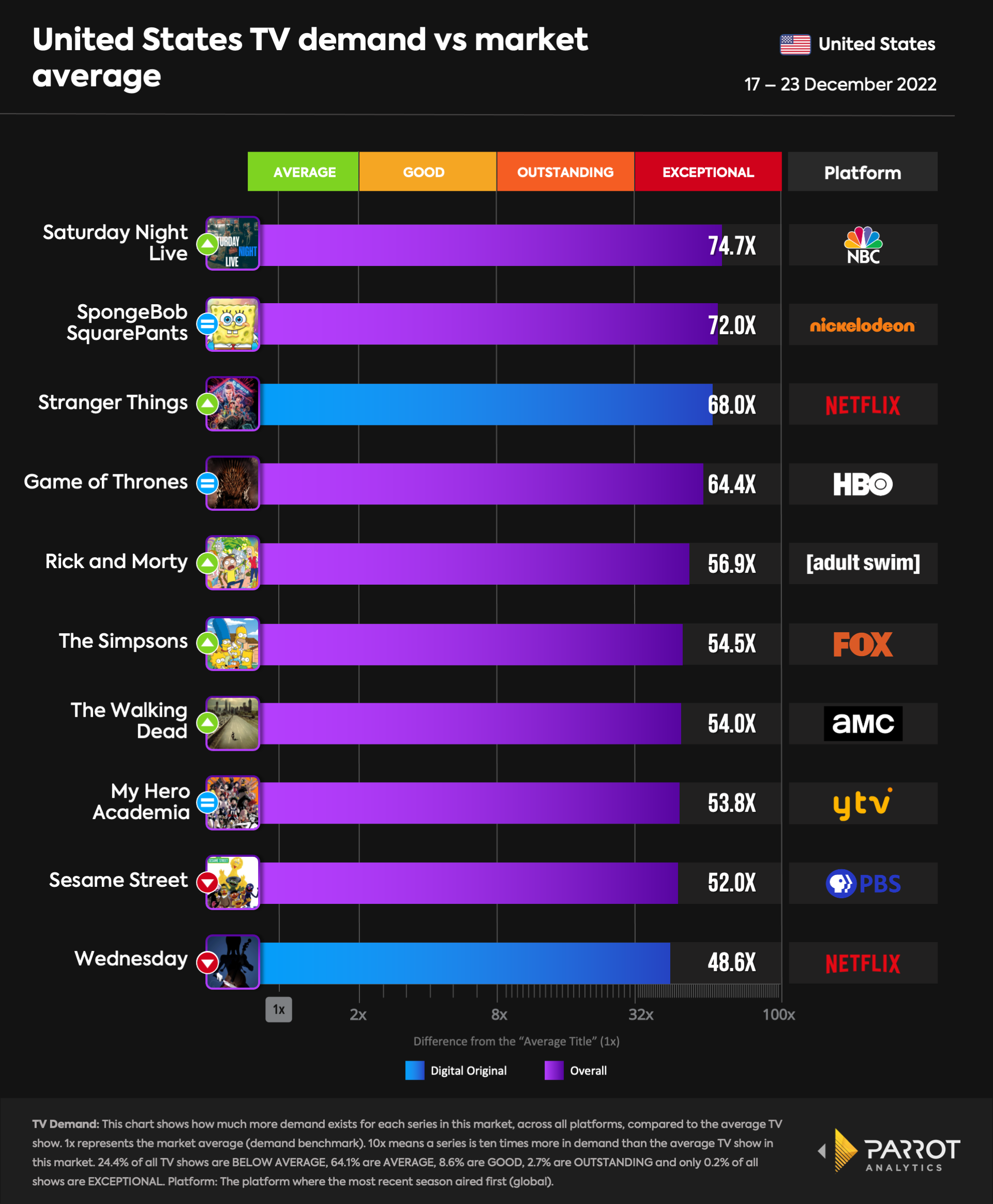 For the week of 17 - 23 December Saturday Night Live took the top position in the overall rankings for the first time in many months. The sketch comedy series saw a 6% increase in demand after it aired its final episode for 2022 and also bid goodbye to one of its longest-tenured female cast members, Cecily Strong on December 17. The spike in demand pushed it up the rankings as it led the overall shows chart with 74.7 times the average series demand in the U.S. for the week.

Rick and Morty saw a final 8% boost in demand this week, fuelled by its sixth season finale that aired on December 11. Given that it is the holiday season, it was expected that the series may see a delayed increase in demand as fans and viewers caught up to the new episode later on. As of this week, the show moved up to fifth place in the rankings, with 56.9 times the average series demand. The next most significant movement in the rankings came from AMC’s The Walking Dead. A 14% increase in demand saw the series re-enter the rankings this week and climb up to seventh place on the chart. The long-running series ended a little over a month ago, leaving fans and viewers hungry for more as AMC announced spin-offs for some of the pivotal TWD characters. A few days ago, fans were finally provided with first images of The Walking Dead: Dead City, an upcoming spin-off series set to air in January 2023. The resulting increase in audience attention made the show 54 times more in demand than the average series.

YTV’s My Hero Academia held on to its position in the rankings this week with 53.8 times the average series demand, a minor increase from last week. It was followed by PBS’s Sesame Street in ninth place with 52 times the average series demand. The long-running children’s show is currently in the midst of airing episodes from its 53rd season, with the next episode dropping on December 30. Given that this season debuted on November 03 and has 35 episodes in all, it is likely that we will continue seeing Sesame Street in the rankings for a few more weeks as it continues to release new episodes. 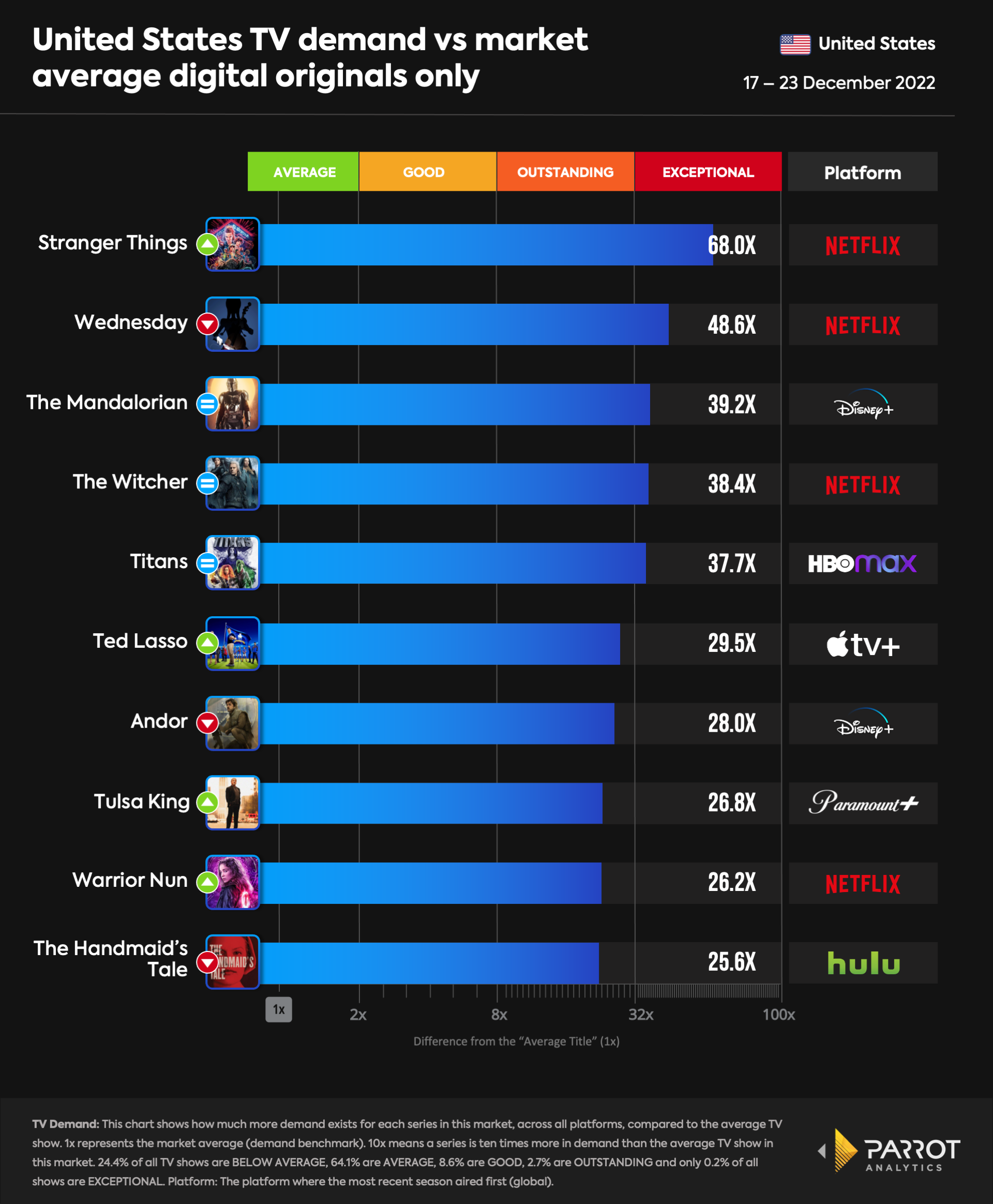 Stranger Things is clearly Netflix’s gift that keeps on giving. A few days ago reports began circulating that an anime spin-off series set in 1980’s Tokyo titled Stranger Things: Tokyo is currently in the works at Netflix. While neither Netflix nor the Duffer Brothers have confirmed these reports so far, the rumors have once again turned audience attention back to Stranger Things as the show took over the top position in the streaming original rankings once again with 68 times the average series demand, a 14% increase from last week.

Netflix’s latest hit Wednesday seems to be at the end of its highly successful run, with the show sliding to second place this week as demand for the series dropped by 38%. Wednesday’s meteoric rise and trajectory post-release goes to show however that Netflix has a new golden goose in its hands, and only needs to leverage it right to turn it into a massive success like it has with Stranger Things. The next three shows in the rankings, The Mandalorian, The Witcher, and Titans all managed to hold on to their positions with minor fluctuations in demand.

Apple TV+’s promo strategy seems to be working out well for them as Ted Lasso moved up to take sixth place in the rankings following a 4% increase in demand. Last week, the platform decided to run a special promotion for some of their biggest hit series for the holidays. Until January 03, the first seasons of Ted Lasso, Prehistoric Planet, The Morning Show and more are streaming for free for everyone. A minor increase in demand has been observed for most of these shows so far, as non-subscribers tune in to stream these series. This week Paramount+’s Tulsa King made an appearance in the rankings for the first time with 26.8 times the average series demand, a 3% increase in demand that came as the show’s finale aired on December 18. The latest instalment of the Taylor Sheridan-verse, Tulsa King has received generally positive reviews and has already been renewed for another season by Paramount+ as it was the driving force behind the platform’s “record signup day”.