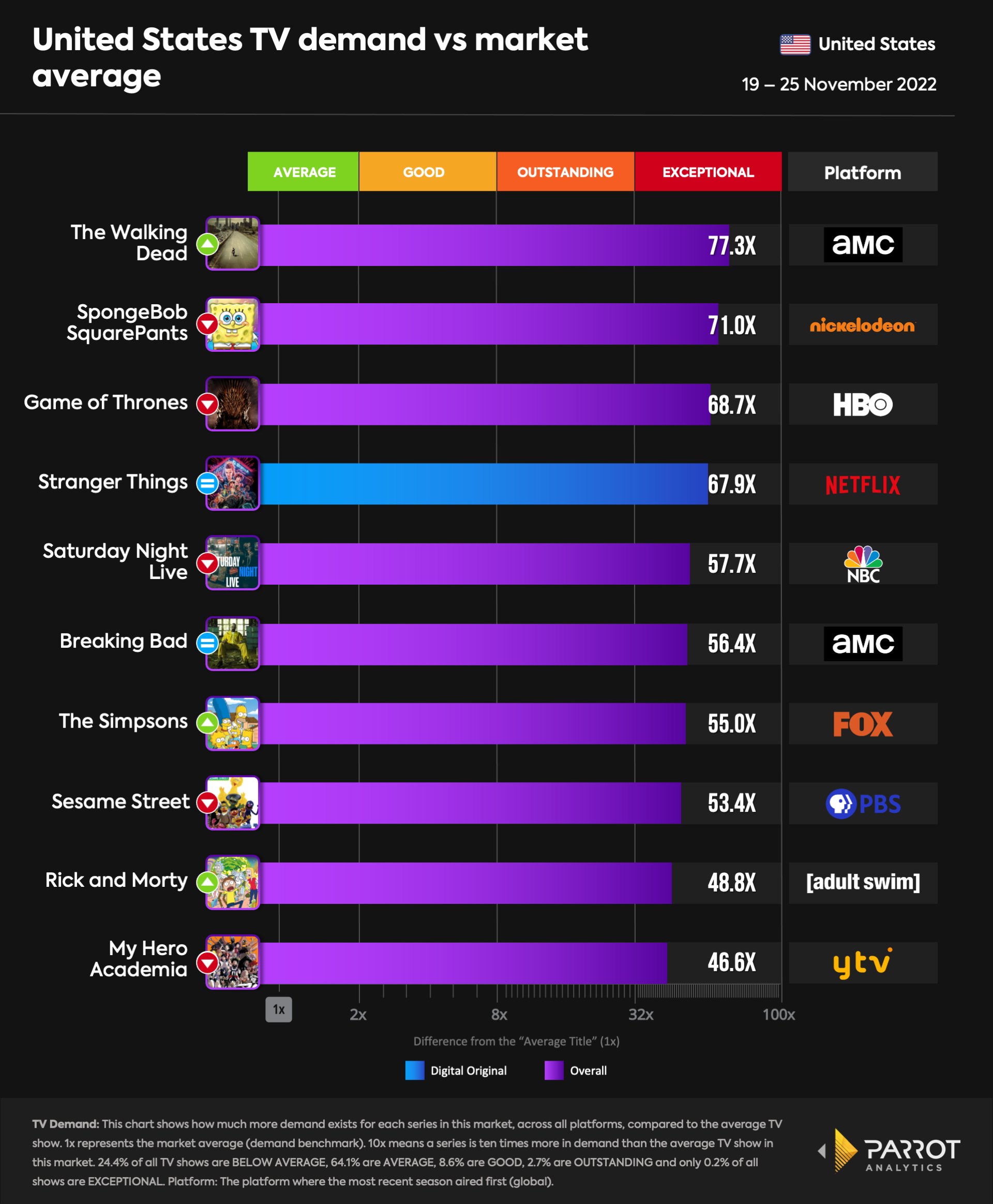 For the week of 19 - 25 November, we saw the end of an era as The Walking Dead aired its last ever episode on November 20 and shot up the rankings to grab the top position among all shows in the U.S. The long-running series ended on a high note with 77.3 times more demand than the average series in the U.S., a 26% increase from last week. While seeing the show end after twelve years might be surreal, it does not signal the end of the Walking Dead universe as a whole - AMC is still continuing the multiple TWD spin-offs and also has a new one in the works (set to premiere next April), so fans can rest assured that they will still have their weekly doses of the zombie horror world of TWD.

Game of Thrones saw a further 3% decline in demand this week and slid down to third place with 68.7 times the average series demand. The show is currently neck to neck with Stranger Things in the rankings, as demand for both series continues to steadily decline. Breaking Bad took sixth place on the chart with 56.4 times the average series demand this week, a 7% increase that pushed it up the rankings.

The Simpsons ranked seventh on the chart this week with 55 times more demand than the average series. The animated show saw an unexpected 12% spike in demand the past week as the show’s producer shared that The Simpsons had once again seemingly predicted the future. This time, the show was credited for apparently predicting Donald Trump’s 2024 presidential campaign in an episode from way back in 2015. PBS’s Sesame Street also had a minor increase in demand this week, which was observed as a result of the annual Macy’s Thanksgiving Parade where cast members from the show regularly participate each year.

Rick and Morty moved up to ninth place in the rankings with a 9% increase in demand after two new revelations from Adult Swim - regarding the revival of two old villains in the new season, Story Lord and Mr. Nimbus. The show is currently in the midst of releasing episodes weekly for the latest season, and has been performing well in terms of demand so far. It remains to be seen how much audience attention the show can actually manage to command over the next few weeks as we head into the holiday season. Rounding out the overall rankings we see My Hero Academia in tenth place with 46.6 times the average series demand, a 4% increase from last week. The slight increase observed for the series can be attributed to the penultimate episode of the show airing on November 19. The anime is currently in its sixth season, with the finale set to air on November 26. It is quite likely that as we see fans tune in to catch up with the episodes ahead of the finale, there will be a further increase in demand for the show. 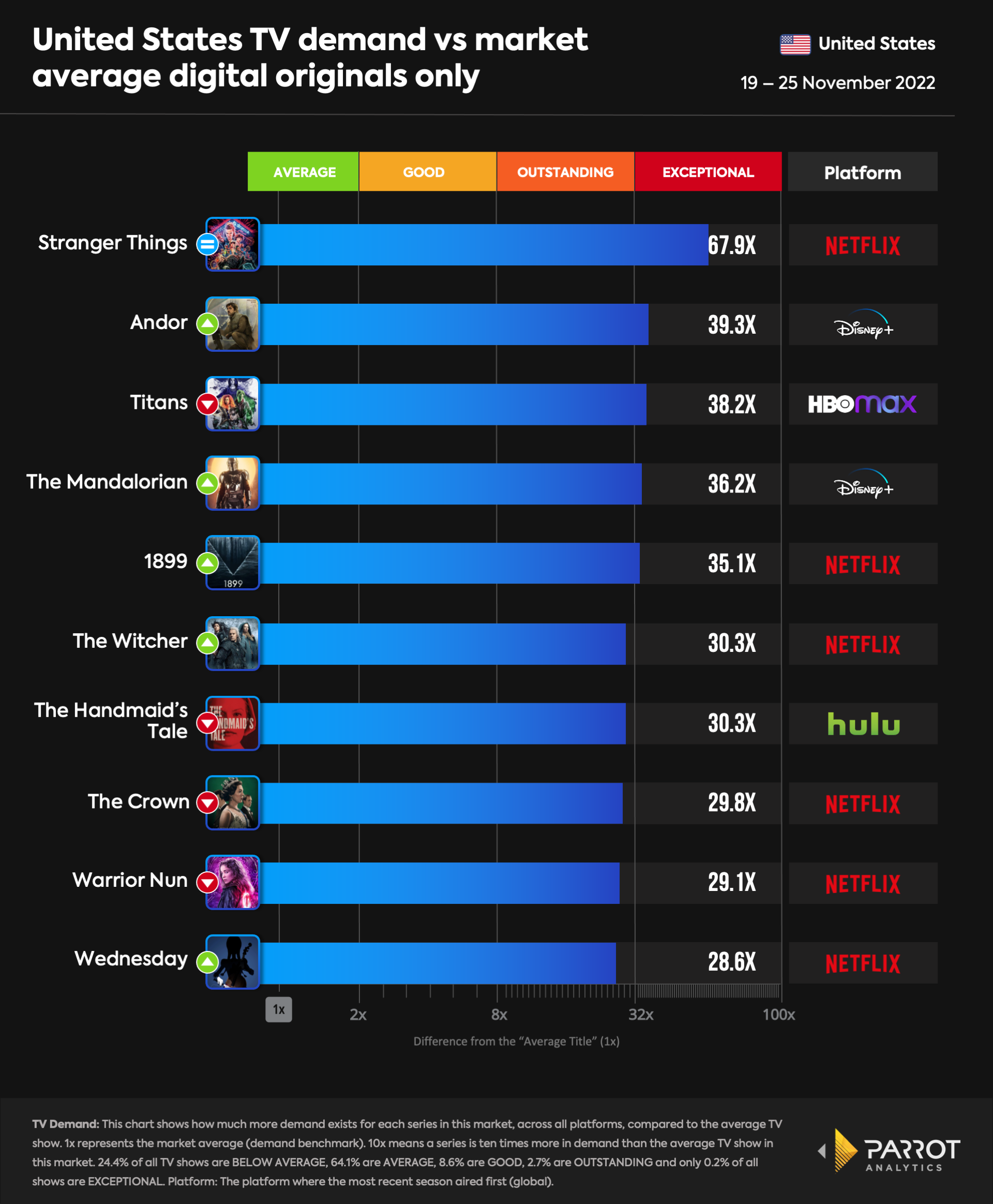 Netflix seemed to have an immensely successful run in the streaming originals rankings this week - six of the top ten original shows in the U.S. came from Netflix. This also includes two new shows that made their way into the chart this week with the highest increase in demand across all series in both the streaming original and overall rankings. While Stranger Things remained at the top of the chart for yet another week with 67.9 times the average series demand, 1899 burst through the rankings and took fifth place on the chart. The latest foreign language series from Netflix, 1899 has received a lot of attention from viewers and critics alike since its release on November 17. The first full week’s data since its release tells us that 1899 seems to be doing quite well and has been able to robustly command audience attention in the U.S this week: the show had over 35 times more demand than the average series, a 320% increase from last week. This is quite an impressive performance for a foreign language show based on an original IP; looks like Netflix might just have another German language hit on its hands.

Disney+’s Andor made it up to second place in the rankings with 39.3 times the average series demand. While the show did have a 4% increase in demand, it had a rather underwhelming performance for its finale which aired on November 23. The series could likely have been overshadowed by other releases this week; it will be interesting to see if any upticks in demand are visible next week as fans have more time to catch up to all the episodes in the series. The Handmaid’s Tale, The Crown and Warrior Nun all saw a double digit decrease in demand this week, sliding down the rankings to take seventh, eighth and ninth place in the rankings respectively.

Rounding out the top streaming originals this week we see Netflix’s Wednesday enter the rankings with 28.6 times the average series demand. This was the second show that had the highest increase in demand this week aside from 1899. The supernatural comedy horror series follows the life of titular character ‘Wednesday Addams’ from The Addams Family and premiered on November 23 to generally positive reviews. Both new releases (1899 and Wednesday) from Netflix have had a strong premiere so far, however once a full week’s post release data on Wednesday comes in next week, it will be easier to understand which series had the most success among audiences in the U.S.