Image: Doctor Who, BBC One 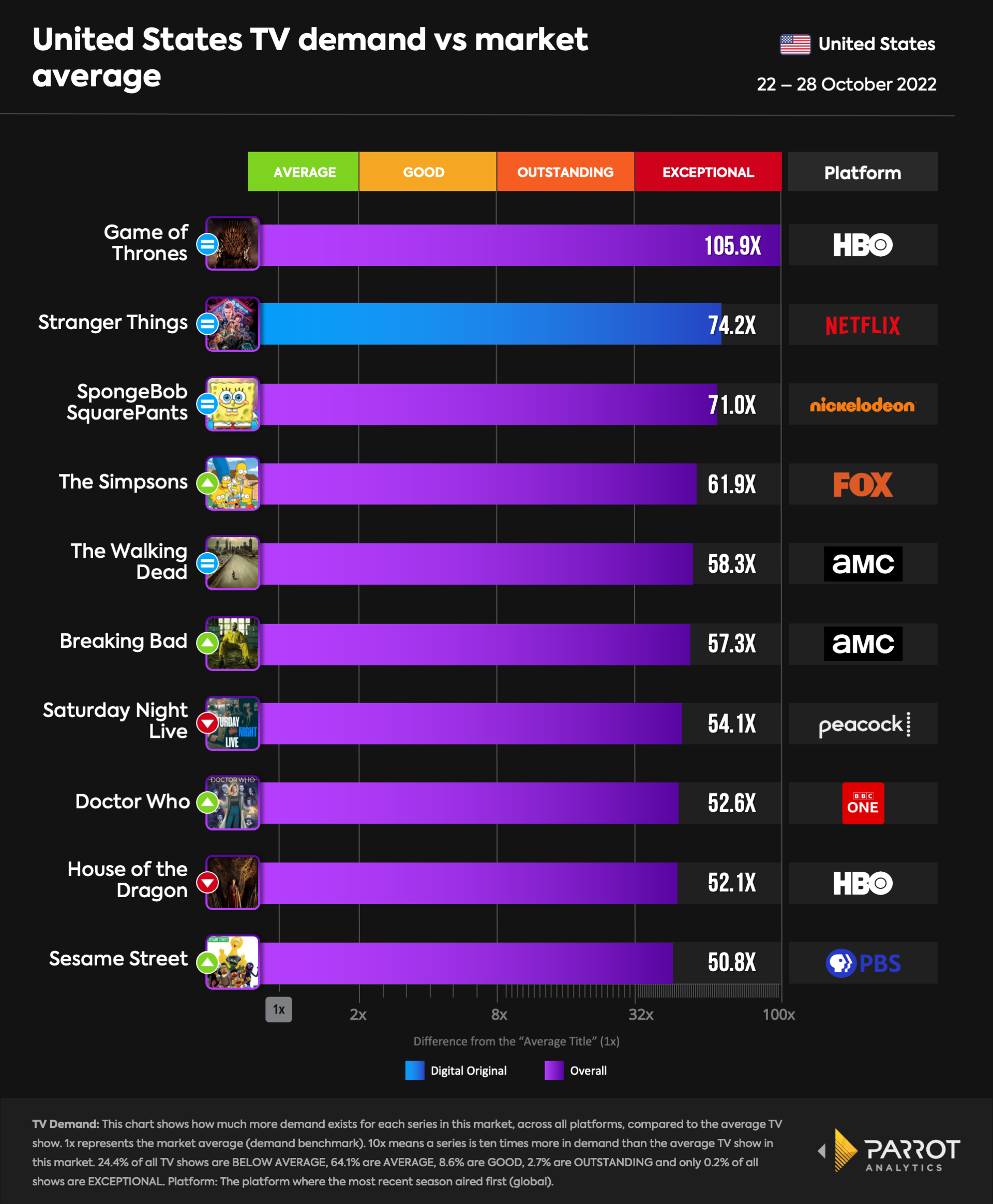 For the week of October 22 - 28, some interesting movements were observed in the rankings. While Game of Thrones remained the top show, its prequel House of the Dragon slid to the bottom of the chart to ninth place with a 16% decline in demand.

As mentioned last week, Halloween tends to boost the demand for The Simpsons because of its ever popular annual “Treehouse of Horror” specials. The show saw a 12% increase in demand ahead of the Halloween weekend and rose up to fourth place in the rankings with 61.9 times the average series demand.

Doctor Who saw an impressive 61% boost in demand this week, and entered the rankings to grab eighth place on the chart. The series said goodbye to Jodie Whittaker with an action packed finale and a twist regarding the identity of the next Doctor Who that had fans stunned. The long-running show is also set to have a new home outside the UK, and will now be available to stream on Disney+ for international audiences. Despite going on for so long, audience interest in Doctor Who still seems to be going strong, with the show having 52.6 times more demand than the average series in the U.S. this week.

Rounding out the overall series rankings, we have Sesame Street taking tenth place on the chart. The show saw a 15% increase in demand ahead of its season 53 premiere, which is set to air on November 03. It’s expected that the series will see more spikes in demand over the next few weeks, as they air episodes featuring Samuel L. Jackson, Brett Goldstein and more such celebrity guests in the new season. 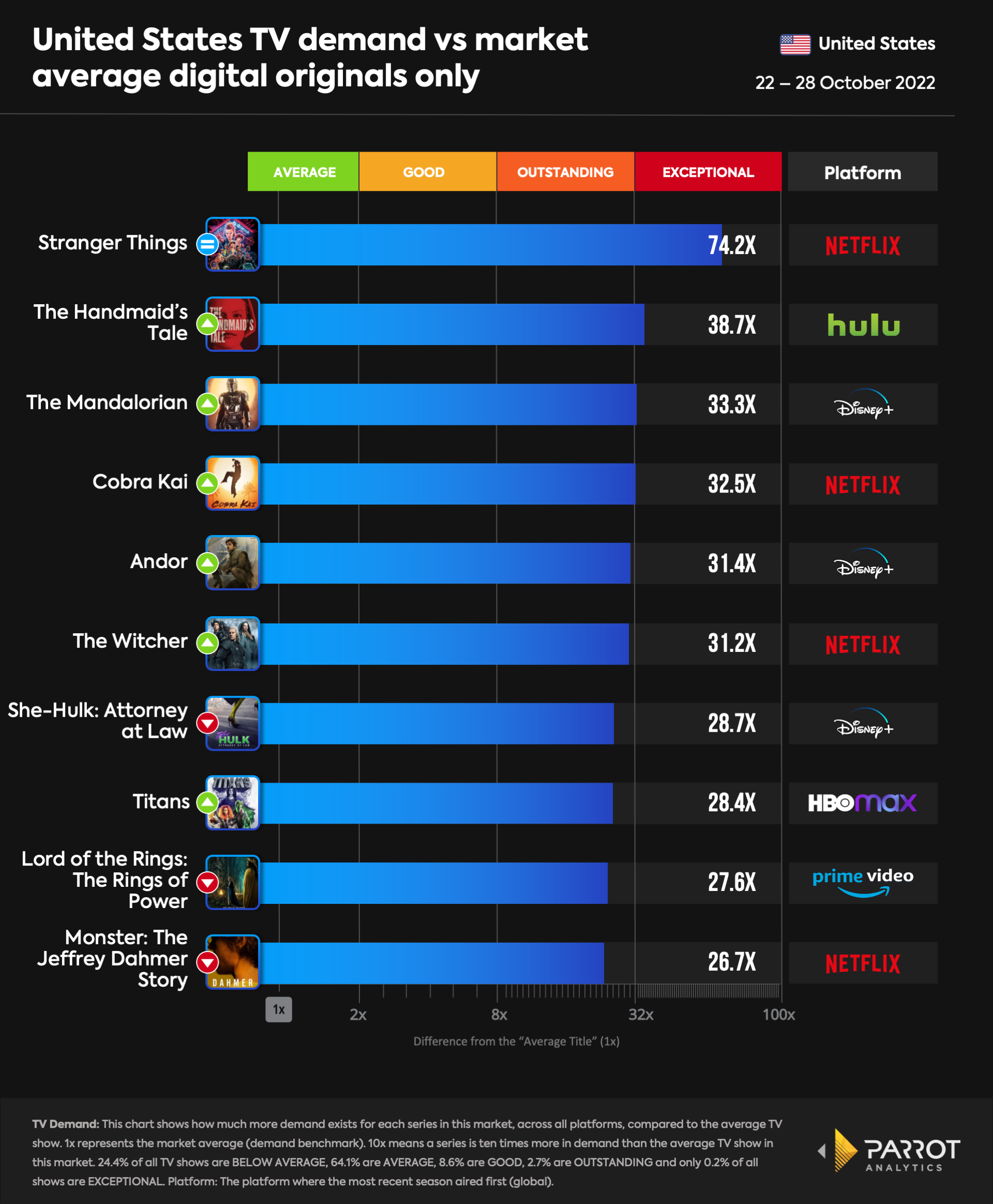 Stranger Things remained at the top chart for yet another week, continuing its dominion over the top streaming originals rankings. The show had almost the same level of demand as last week, and maintained its wide lead over all other shows on the chart. As predicted last week, Hulu’s The Handmaid’s Tale had another boost in demand which brought it up to second place in the rankings this week with 38.7 times the average series demand.

Despite not seeing any major increase in demand, The Mandalorian, Cobra Kai (which actually saw a decline in demand), and Andor all moved up the rankings this week. This was a direct result of both She-Hulk and  The Rings of Power having a double digit decline in demand.

Netflix’s The Witcher was back in the rankings and took sixth place in the chart this week. The show had 31.2 times the average series demand, a 15% increase from last week. The increase in demand comes as CD Projekt decided to remake the original 2007 game last week, a decision that has been quite popular among fans of the game. However, fans of the series were hit with a very shocking curveball a few days ago, when Netflix shared that Liam Hemsworth would be replacing Henry Cavill as the Witcher in the fourth season.

HBO Max’s Titans was also back in the rankings with a 4% increase in demand this week, a direct result of HBO Max releasing a full length trailer of the upcoming season. The new season is set to debut on November 03, and after dropping two new episodes on the day, will follow a weekly release schedule. The show will likely be a regular in the rankings over the next few weeks as the new episodes capture audience attention in the U.S. again. As of this week, it took eighth place in the rankings and had 28.4 times the average series demand.