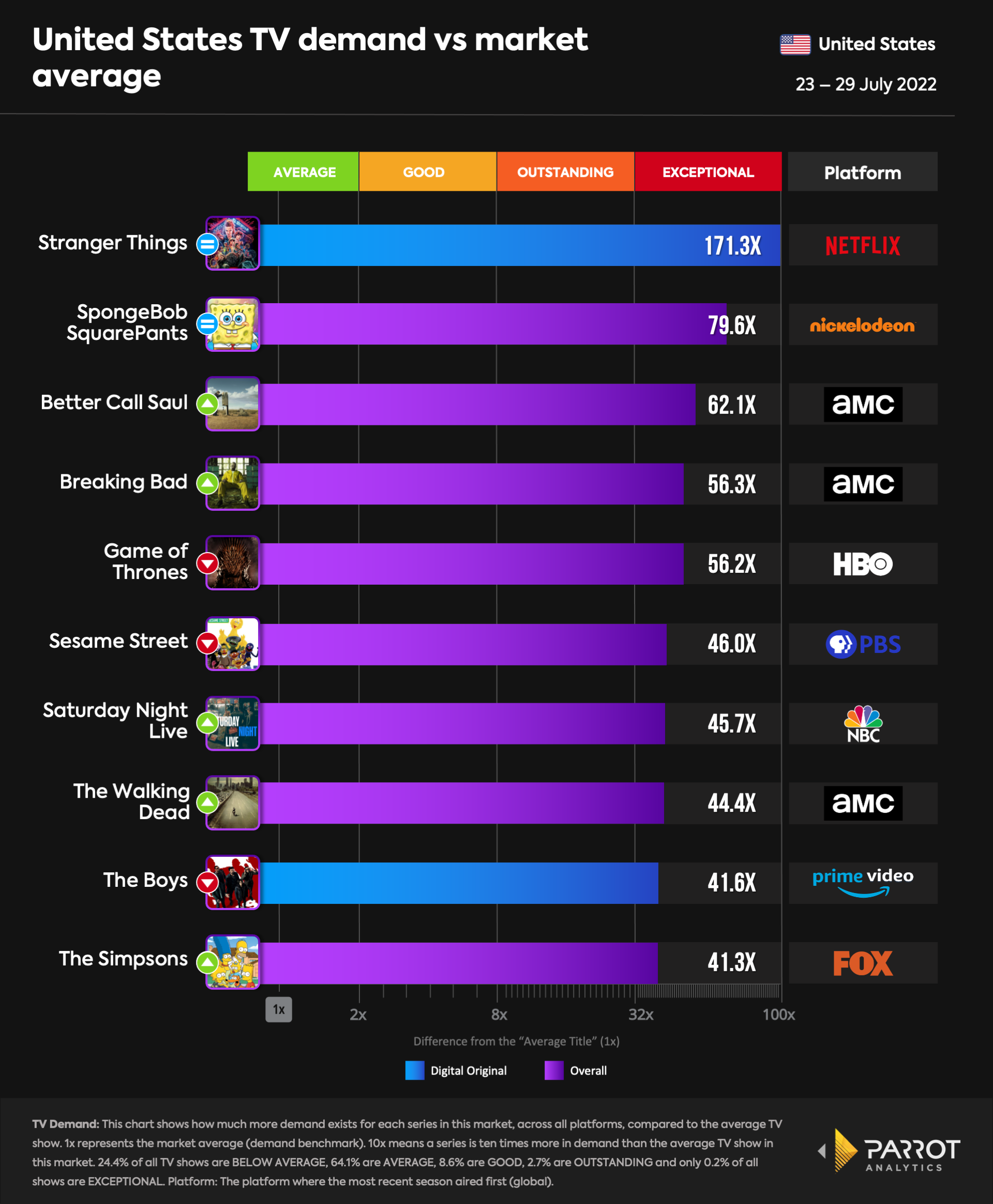 The last week of July ended with Stranger Things still at the top of the overall shows and streaming originals rankings in the U.S. The sci-fi series saw a 12% drop in demand, but still had a wide lead over its rivals on the chart with 171.3 times more demand than the average series in the U.S. this week.

Spongebob Squarepants came in next on the overall top shows chart with almost the same level of demand as last week. There were a few shows that actually did see a double digit increase in demand in the U.S. this week; AMC’s Better Call Saul had 62.1 times the average series demand – a 14% increase which moved it up to third place in the rankings. The Breaking Bad prequel also boosted demand for the original show by 8% and brought it in fourth place on the chart. Both shows saw a spike in demand after the tenth episode of this season aired on July 25 and continued on ahead of the premiere of the next episode, titled “Breaking Bad” which is set to air on August 01. Both shows have shown a robust level of demand despite it being Stranger Things season. The uptick in demand is definitely expected to continue as the show heads towards its finale on August 15.

As mentioned last week, The Walking Dead  began seeing a spike in demand after the trailer for the final season was released at Comic Con. The trend has bled over into this week as well, with the series having a further 15% increase in demand as AMC continues to share more information and snippets with fans in the lead up to the final countdown. As of a couple days ago, they confirmed the premiere date for the season (October 02) and announced that AMC+ subscribers will have early access to the first pair of episodes. The move might just work as a successful subscriber acquisition tool for AMC+ in the weeks leading up to the premiere. Rounding out the overall top ten shows we see The Simpsons making a comeback on the list as a result of a 15% increase in demand. At Comic-Con 2022, the ever-popular animated show revealed that they will feature two different specials for Halloween this year. And one of the specials will spend its entire runtime paying tribute to a Stephen King classic. The increase in demand for the series brought it in tenth place on the chart (up from thirteen) with 41.3 times the average series demand. 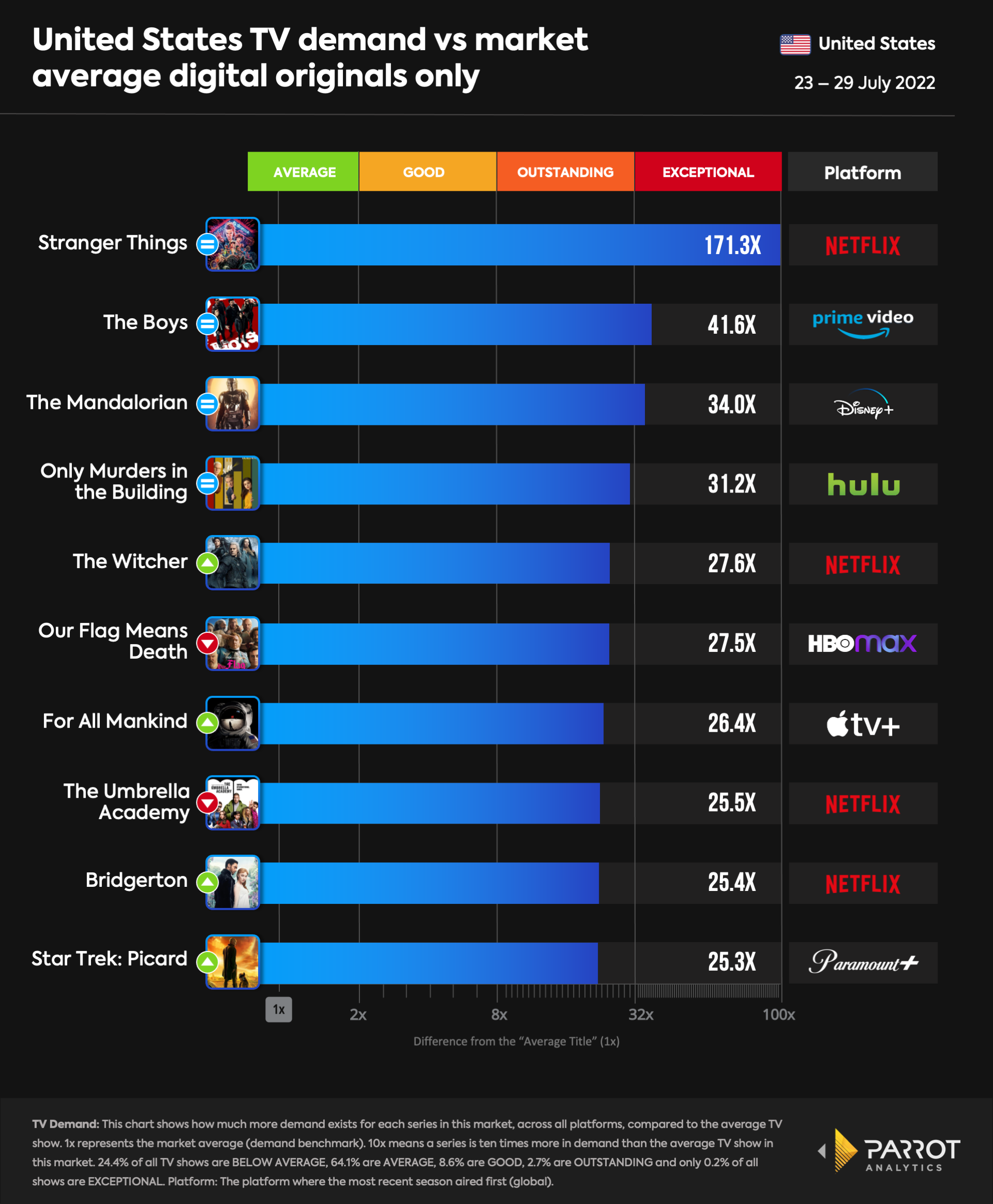 Apple TV+’s For All Mankind took seventh place (up from fourteenth) in the rankings this week. The show had 26.4 times the average series demand, a 6% increase. The critically acclaimed sci-fi show is now heading closer to its finale which is set to air on August 12 and it was recently revealed at Comic-Con that it has already been renewed for a fourth season. Bridgerton also had a 7% increase in demand this week, coming back into the rankings in ninth place with 25.4 times the average series demand. The spike in demand can be explained as a culmination of different Bridgerton related news that came together in the last week. Demand for the series saw an uptick after fans were given a “first glimpse” of a couple of characters in the series; in addition it was also announced that one of the main Bridgerton actors Ruby Stokes (who plays Francesca Bridgerton), is set to be replaced by actress Hannah Dodd.

Rounding out the top streaming original rankings this week, we see Star Trek: Picard in tenth place as a result of a 36% increase in demand. This increase in demand is also the result of Comic-Con: with Paramount unveiling the final season trailer and ‘TNG’ portraits to fans at SDCC, it comes as little surprise that Picard had a surge in demand shortly after, making it 25.3 times more in demand than the average series in the U.S. for the week.