Video Games: The next big thing for TV?

In 2021, it was estimated that there were more than 3.2 billion people around the world who actively played video games. While there are many different video game genres, it is clear this is a sizeable market overall and it is understandable why many games have been adapted into movies and television shows. Although a number of these adaptations did not have the best reception from fans, some have become very successful. The new Halo adaptation from the Paramount+ streaming service, for instance, has had an exceptional level of global demand since its release in March. This level of success can also be seen in recent film adaptations, such as Sonic the Hedgehog 2, which has also reached expectational highs in terms of demand. This article will cover the current demand for this category of television, as well as possible common factors for success shown in recent adaptations of video games, such as Halo, by Paramount+.

Halo, adapted from the Xbox military game series of the same name, was released at the end of March this year and, with three more episodes left to air, has reached a very high level of demand. The chart below shows the global demand distribution for Halo over the past thirty days. Released on March 24, the Paramount+ series has had an average demand of 38.5 times more demand than the average series worldwide, while reaching a peak of 43.1 times more global demand than the average series. This is an exceptional amount as only 0.2 percent of series have this level of demand. 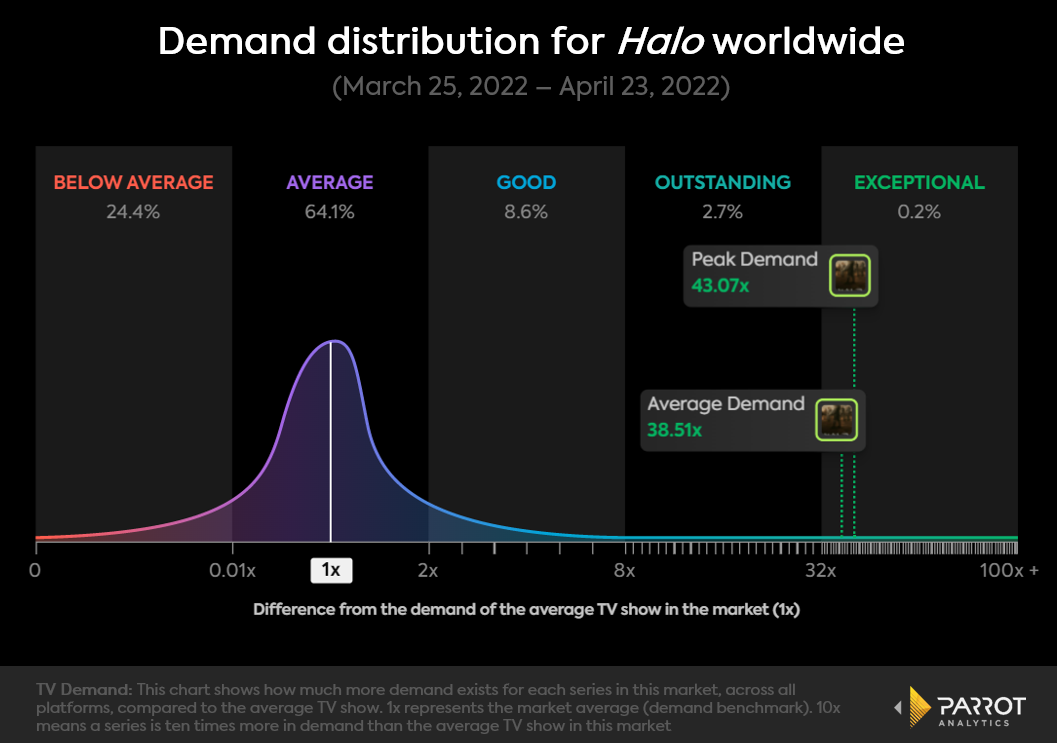 There are a number of possible reasons behind this high level of demand for the Halo series, which had also declared as the most watched original series within twenty-four hours on the Paramount+ streaming service. While this television adaptation does not closely follow any of the storylines from the games, of which there are 16, there appears to be a very good reception from fans- with some even saying the adaptation has something unique to offer. This balance between the familiarity of the games and a brand new storyline could have likely influenced the success Halo is seeing in terms of demand. On top of this, Steven Spielberg’s close involvement in the production of the series could likely have been appealing to the wider public, who may not have played or even heard much about the games before.

Arcane and League of Legends

The chart below shows the global distribution of demand for Netflix’s Arcane, which was released in early November last year. Over the last thirty days, Arcane has had an average level of 31.8 times more global demand than the average series, while reaching a peak of 33.5 times more demand than the average series worldwide. The animated series, which is currently in production for its second season, is based on the online battle-arena game, League of Legends. While it was released in 2009, the game is still hugely popular today, with well over 2 million active users. Furthermore, although its game-play and emphasis on its storyline are quite different to that of the Halo game series, Netflix’s TV show adaptation of League of Legends through the story of Arcane has reached a similar level of success in terms of demand. 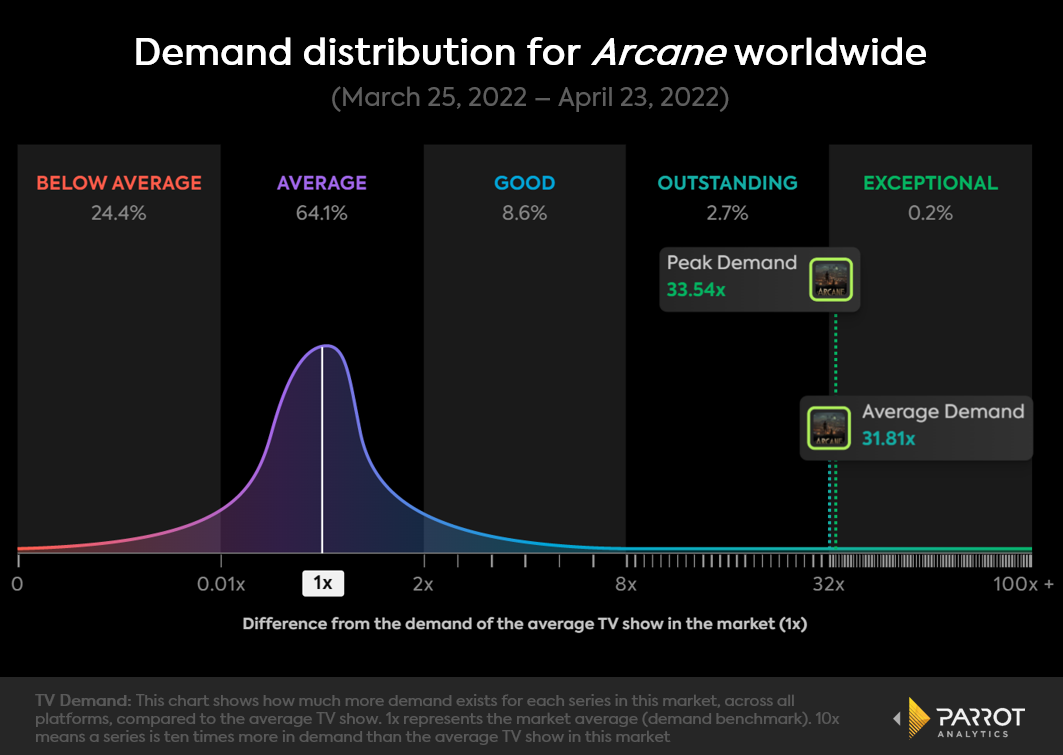 The outstanding level of current global demand for Arcane, almost seven months after its release, is a great achievement for the show - both in terms of demand and the positive reception from fans of the League of Legends. With a large number of playable characters in the online game, each with their own elaborate backstory, some had even expressed their surprise in finding the series to be a good watch.

Record demand for The Witcher

While it first came to us as a series of novels by Polish writer Andrzej Sapkowski, The Witcher video game series from CD Projekt has a massive following from gamers around the world - with more than 25 million copies of the series sold in 2017. Although Netflix’s television adaptation of the story was based on the novels, which were extremely popular in their own right, The Witcher’s sizeable fanbase was likely a great influence on the show’s record level of demand. The chart below shows six dimensions of measurement for The Witcher. The highest of these is its travelability, which refers to the popularity it has gained outside of its home market. The Netflix series, which has been confirmed for a third season, has had 66.2 times more travelability than the average series worldwide. Demand for the series has also been at an exceptional level over the past year, with 43.2 times more global demand than the average series. This being said, with a peak number of 31,534 players last month on the Steam gaming service alone, it could be speculated that this has been reflected in these exceptional levels of demand and travelability. 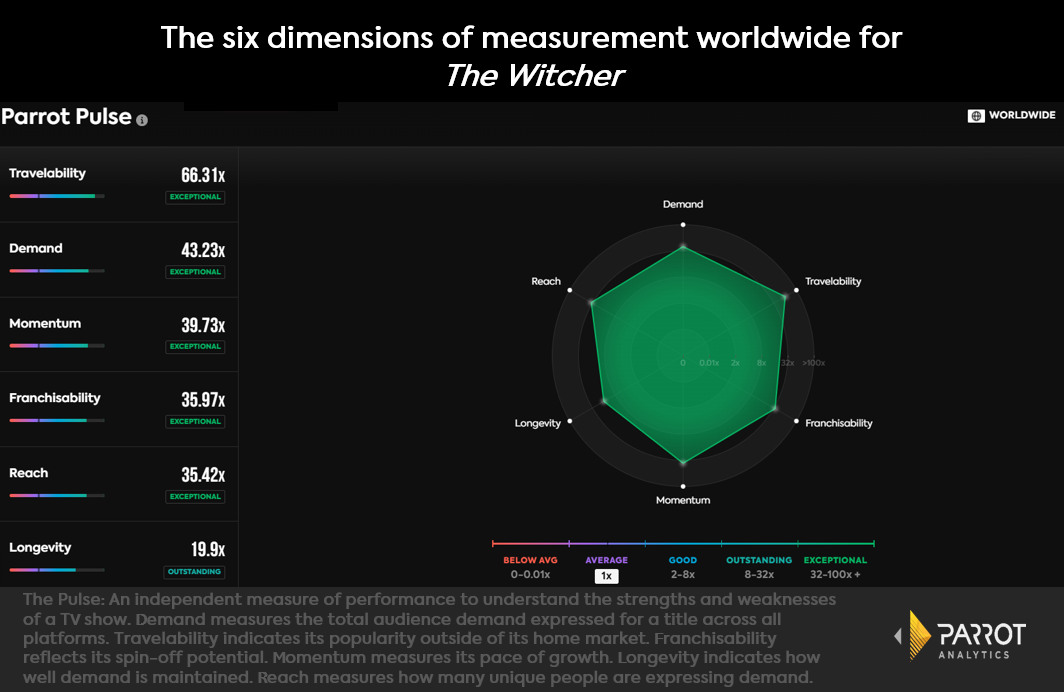 In considering the enormous, and growing, number of gamers around the world, it is understandable streaming services are seeing a window of opportunity in terms of targeted content. Moreover, with a number of video game adaptations announced by these services, the success of the series covered in this article might only be the beginning when it comes to this category of television. Netflix appears to be in the lead when it comes to this category of series, taking on a number of game adaptations - most of which will be arriving to the streaming service within the next year. Resident Evil, for instance, has been confirmed by the service to be airing in July this year. The horror-themed series, which will take place in the aftermath of a global apocalypse, is based on the 25 year old game franchise with the same name. While the franchise has been around for well over two decades, the Resident Evil games have managed to remain consistently relevant within the gaming community across its nine installments and various spinoffs. Just last year, it had managed to reach the highest peak number of players on Steam, with almost 102,000 people playing it at once on May 7.

A number of other streaming services have also taken on some big names in the gaming world. Keeping with the somewhat relatable pandemic themes seen in Resident Evil, HBO Max is speculated to be releasing its adaptation of Naughty Dog’s The Last of Us in 2023. With its own hugely devoted fanbase and impressive records, it is understandable the HBO streaming service has chosen this particular game series - and the anticipation surrounding it. Considering both this storyline and that of Resident Evil are heavily pandemic-related and within the horror genre, it will be interesting to see how groups outside of the game’s fanbase receive them, also. In remembering the record high level of demand for The Walking Dead last year, the success of both series on either streaming giant could be very favorable in terms of demand.

Diversity in the gaming market

An important point to note when it comes to the adaptation of video games is the diversity in themes and genres. The Sonic the Hedgehog film is a perfect example of this. Paramount+ is set to release a television series spinoff of the film next year. This is an understandable move, considering the popularity of both the first and second instalments of the Sonic the Hedgehog film series. It will be interesting to see how well the series performs in terms of demand, particularly within the children’s genre, which is often influenced by factors such as familiarity. With its first game released in 1991, the Sonic the Hedgehog game franchise is undoubtably familiar to a number of separate generations. 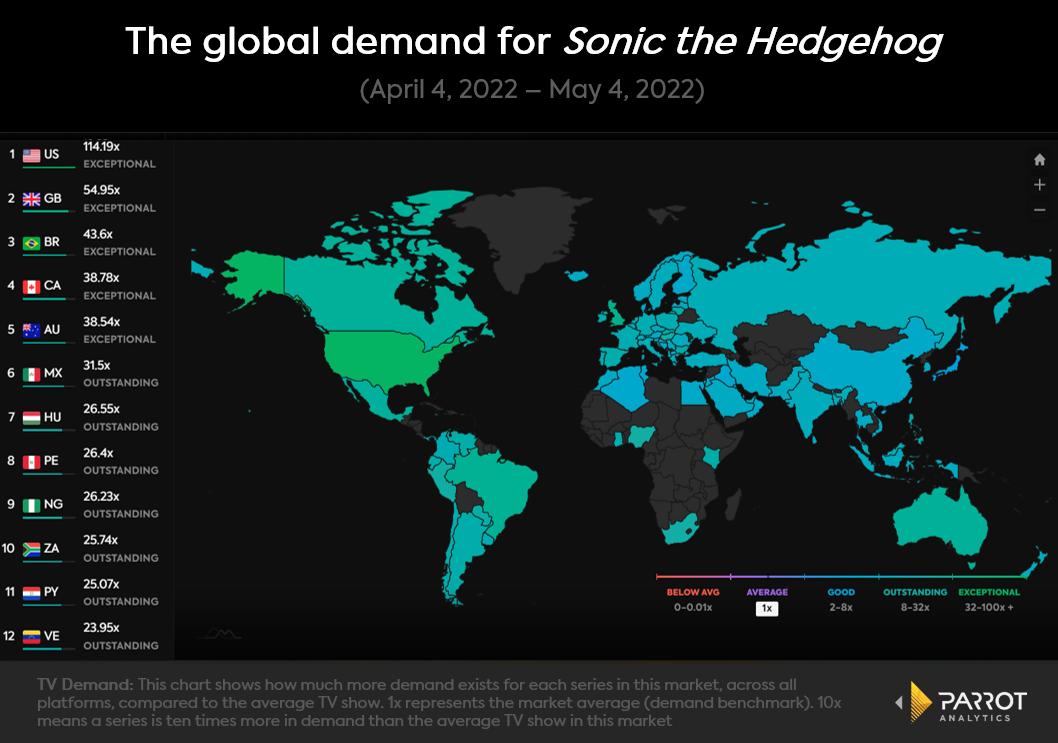 With beloved characters and storylines that belong to extremely devoted and diverse fanbases, adapting video games into films and television shows understandably takes a lot of thought and creativity. However, with adaptations such as the Paramount+ Halo and Netflix’s The Witcher showing the potential for major success in terms of demand and travelability, it is also understandable why so many streaming services are now jumping into this category. As more and more adaptations are released, it will be exciting to see how the demand for this trend in television changes overtime, as well as how sustainable it can be as its own subgenre in the long-term.