Why animation is still any streamer’s game to win

No one streamer dominates the animation lane currently. Among the 10 most in-demand series in the United States for the first-quarter of 2022, Netflix series take up four spots, but Amazon Prime Video holds the two top spots on the list.

As Prime Video tries to figure out its identity in a new streaming space crowded with intense competition from some of the best studios and networks in Hollywood, finding an area that’s growing in demand but isn’t being dominated by any one streaming company provides a great opportunity. That much can be seen from Netflix’s 40% standing in the top 10.

Prime Video had the two most in-demand animated series in the U.S. during the first quarter of 2022. The Legend of Vox Machina, from the team who works on the popular online web series Critical Role, was the most in-demand animated series, nabbing an impressive 17.9 times the average demand of all other U.S. series. That was followed by The Walking Dead co-creator Robert Kirkman’s Invincible, based on the comic of the same name, that subverted the idea of superheroes in a unique and entertaining way. Invincible had nearly 14 times the average demand of all shows in the U.S.

Disenchantment, BoJack Horseman, Big Mouth, and F Is for Family are all great examples of areas that Netflix has found success — even in these turbulent times for the company. Netflix’s comedy programming is always regarded as relatively strong, but partnering with creatives — like Matt Groening, who created The Simpsons, on Disenchantment, as well as comedians like Nick Kroll and John Mulaney on Big Mouth — to latch onto some of the Family Guy audience signing up for Netflix has proven a success.

Unsurprisingly, animated spinoffs from highly in-demand live-action franchises like the Marvel Cinematic Universe and Star Trek found their way to the top 10. So did raunchy comedies like Big Mouth and the type of “sadcom” series that Netflix is reportedly no longer looking to make, such as BoJack Horseman. 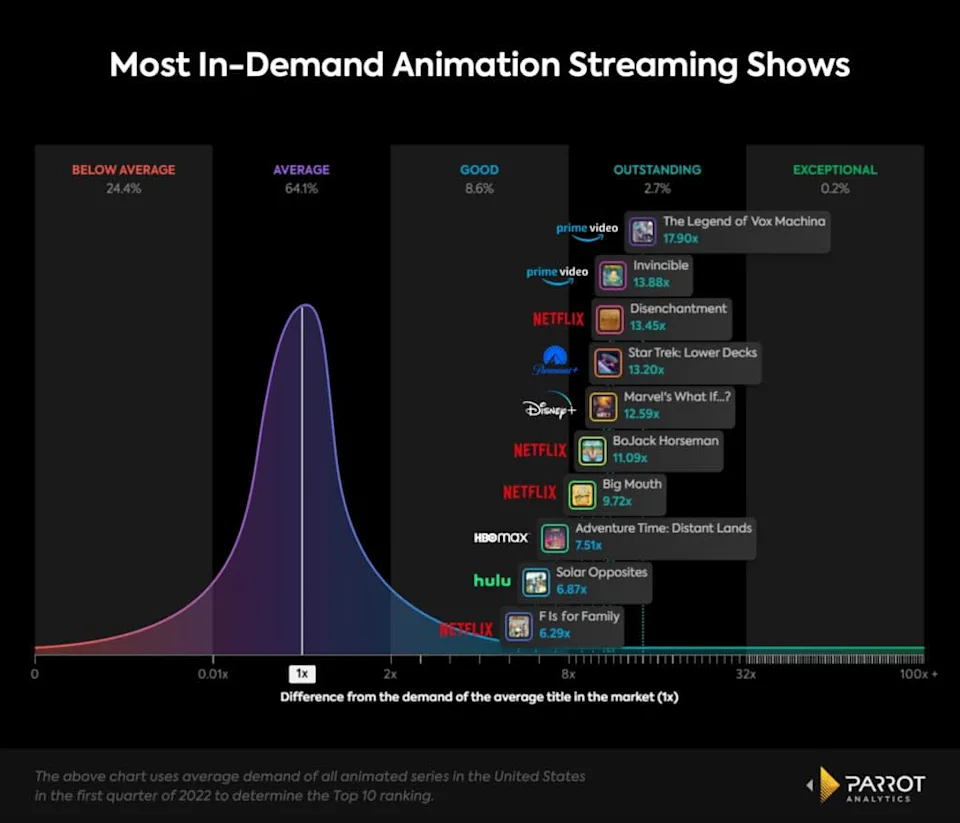 Even F Is for Family” is an example of a show that may have succeeded on a network’s animation block, like Fox, but found a home and an audience on Netflix. Animated comedy makes up 46% of all demand share for animation digital originals. Adult comedy and animated sitcoms make up another 16.5%. Pairing animation and comedy is a great way to latch onto younger viewers who grew up with South Park and are looking for their next favorite show. A great example: Solar Opposites, from Rick and Morty co-creator Justin Roiland, which streams on Hulu and is in the top 10.

One of the biggest opportunity areas for over-the-top (OTT) services and animation going forward is expansions of their big live-action series. Disney+’s Marvel’s What If…?, Paramount+’s Star Trek: Lower Decks, and even series like Star Wars: Visions or Harley Quinn are great ways to re-engage longtime fans through new mediums, while also reaching new, younger fans. 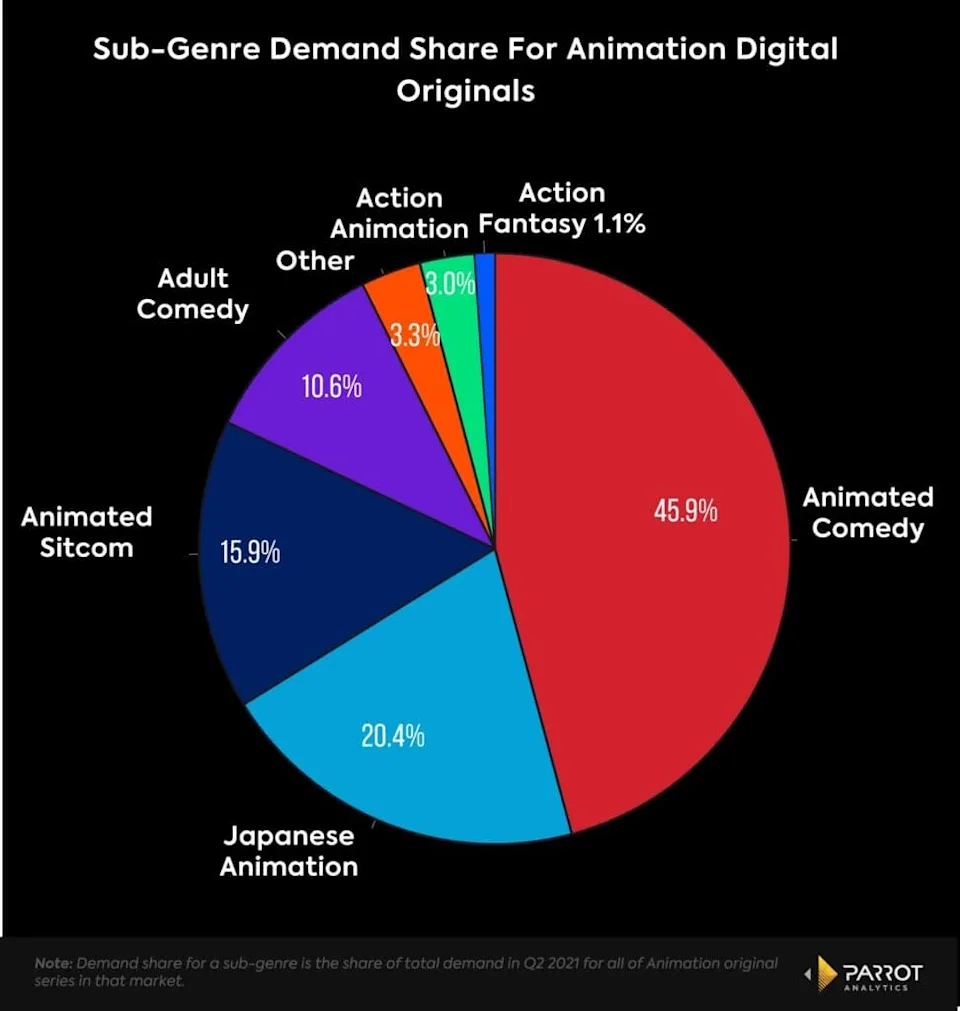 One of the most important installments in the Star Wars franchise is arguably Dave Filloni’s The Clone Wars because it introduced a younger group of Star Wars fans to the franchise through popular characters like Anakin Skywalker, Obi-Wan Kenobi and Ahsoka Tano. Now, those same characters can be used to expand the Star Wars live-action universe on Disney+. New animated series can do the same thing for all the streamers.

Animated series show no sign of slowing down in demand. As budgets get tighter for streaming services, and Wall Street analysts look for content that shows signs of longevity that will be in demand for more than a couple of seasons, adult animation is a low-risk, high-reward opportunity to pursue.