Doctor Strange In The Multiverse Of Madness: Interconnected storylines make for big success

The most recent instalment to the Marvel franchise, Doctor Strange in the Multiverse of Madness, was released to cinemas at the beginning of this month and saw massive levels of demand - not only for itself, but for related storylines as well. While with its own storyline, the film relies on a number of characters and their stories from other Marvel films and shows. WandaVision, which had an extremely high level of initial demand in its own right, was one of these shows and it saw a spike in demand in the first week after Doctor Strange in the Multiverse of Madness’s release. This article will cover the demand for this new film, the demand for WandaVision in the first week since the film’s release, as well as a further look into how interconnected characters and storylines might have been one of the greatest influences to the success Marvel has seen across its movies and TV shows.

Demand for Doctor Strange in the Multiverse of Madness

During the period surrounding its release in cinemas, Doctor Strange in the Multiverse of Madness had a very high level of success, even breaking a number of records in regard to films released within the pandemic-era. After two weeks, the film remained at the top of the box office charts and had made $688 million worldwide. The chart below shows the global demand for Doctor Strange in the Multiverse of Madness over the past month. It had an average level of 116.1 times more demand the average movie worldwide, while it reached a peak level of 180.9 times more demand than the average movie worldwide. This is an exceptional level and it will be interesting to see how it might change in the coming months. 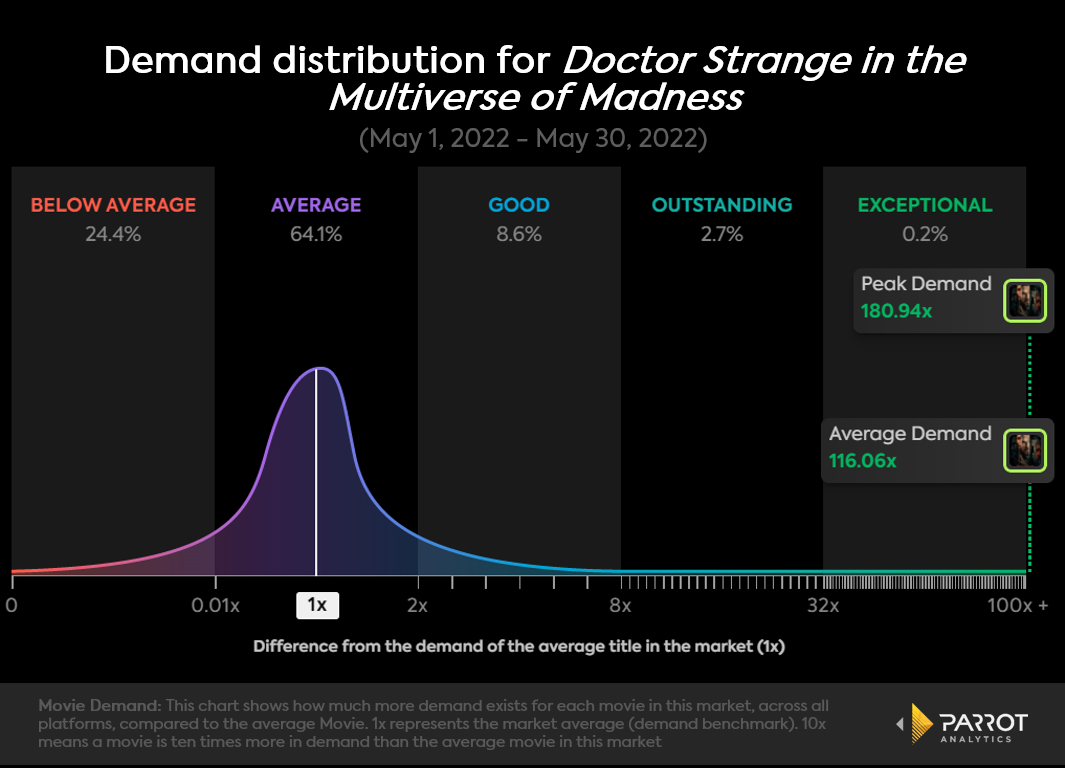 The chart below shows the demand for Doctor Strange in the Multiverse of Madness over the past month. The United States is at the top of this list with an exceptional 95.9 times more demand than the average film nationally. Great Britain, where the film’s lead, Benedict Cumberbatch, is from, has 41.2 times more demand than the average film. The chart indicates, also, that the film has had a good reception from a diverse range of markets. India, Brazil and Philippines, countries with significant differences in culture and spoken language, all have high levels of demand for the new Marvel film. 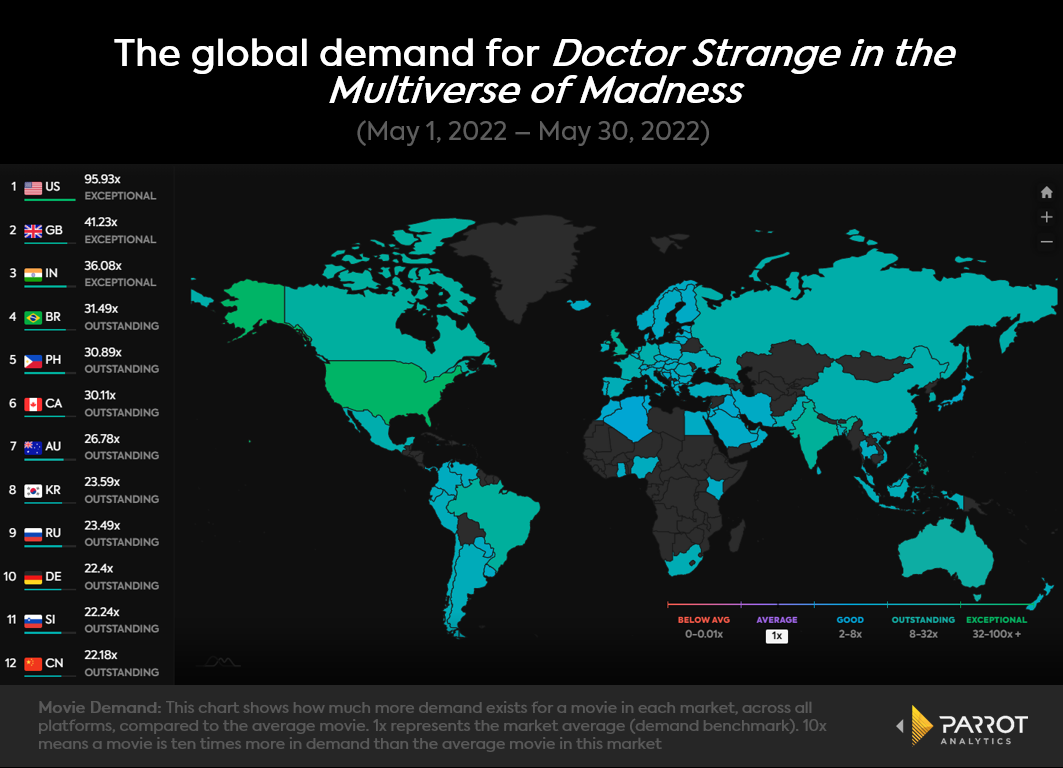 The diversity in demand could be a reflection of the global impact films from Marvel Studios have had as a whole. While they are produced in the United States, with predominantly American accents and westernized values, they appear to have significant reach across a number of cultures. South Korea, for instance, has drastically grown in viewer numbers for Marvel films under the Avengers umbrella since the release of Iron Man 3 in 2013.

Influence on other Marvel instalments

The chart below shows the shift in demand for WandaVision over the past two months.- On May 7th, two days after Doctor Strange in the Multiverse of Madness had been released in theatres, WandaVision rose quite dramatically in its level of demand. The series, which was released in early 2021, had 65.3 times more demand than the average series worldwide. In the month prior, the series remained between 39 and 49 times times the average series demand worldwide. With this considered, it was very likely the huge spike in demand for the series during May was a result of Doctor Strange in the Multiverse of Madness’ release. 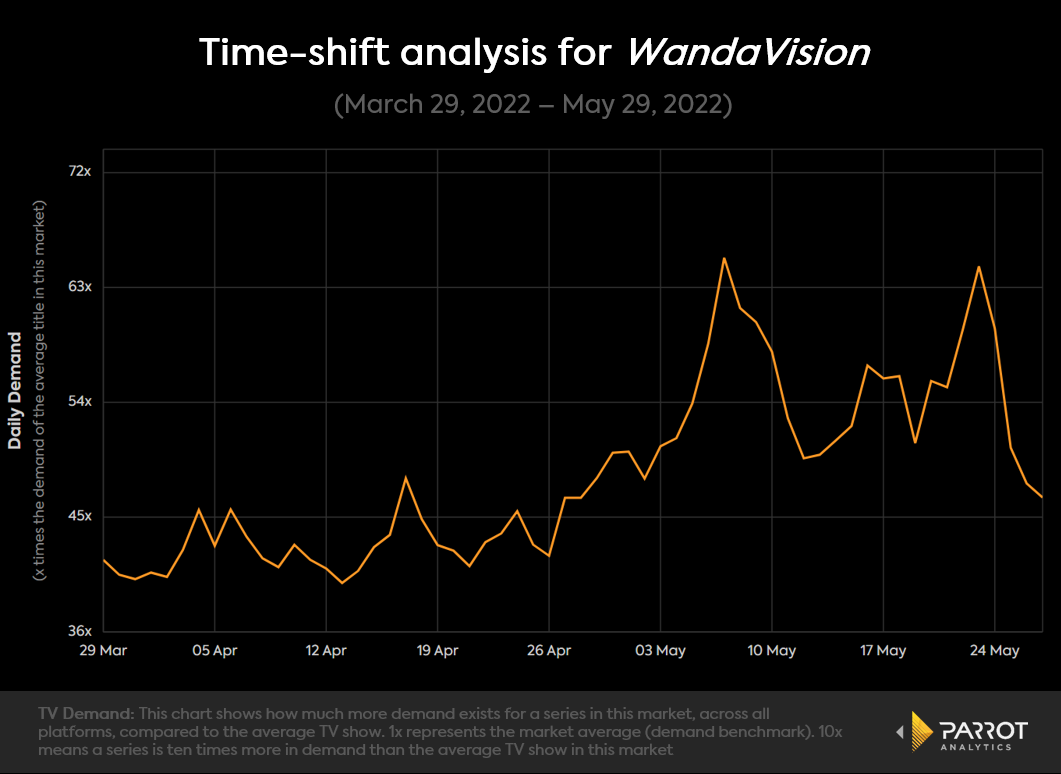 Wanda Maximoff, the center of the WandaVision storyline, played a big role in the new movie and so it is understandable Marvel fans may have returned to the series, or looked up information about it online as a refresher. The spike in demand for WandaVision after the release of Doctor Strange in the Multiverse of Madness could even be an indication of some of the factors influencing Marvel’s success as a whole.

While superhero movies are still very much in-demand on a global scale - which could in itself be one of the main influences behind the success of most Marvel instalments - the interconnected storylines and character relationships across multiple spin-offs could potentially be just as big of a factor when it comes to demand success. This focus on interconnectivity when it comes to characters and storylines has been said to have been successful due to consistency, not only consistency in style but consistency in film quality as well. All Avengers related films and TV series have been produced under the Marvel Studios umbrella, overseen by president Kevin Feige, which was a likely influence to the solid consistency across all instalments. Because of this, new releases to the franchise have the potential to go above and beyond their own levels of demand and can drive demand for previous series and films, as we have seen for WandaVision.

An aspect to watch

With a massive amount of demand in the month since its release to cinema, as well as its box office record, Doctor Strange in the Multiverse of Madness could easily be recorded as yet another success for the Marvel Studios film and television production company. The significant spike in demand for WandaVision since the film’s release also points toward a potential factor in Marvel’s success - consistency and interconnectivity. With new instalments creating demand for previous instalments, due to how they relate to each other through related storylines and character relationships, Marvel appears to have found a great method for keeping older series relevant. With Thor: Love and Thunder arriving next month, and a new Black Panther movie to be released in November, it will be interesting to see if this domino effect is played out again.