It has been a number of decades since the original Top Gun film in 1986, however, the twenty-first century sequel, Top Gun: Maverick, released just last month has seen massive success around the world. The film, which was declared as the highest grossing movie in the United States, surpassing that of Doctor Strange in the Multiverse of Madness, managed to bring in over $760 million worldwide. It has also seen huge levels of international demand in the month since its release. This article will cover this demand and potential factors influencing the success of this long-awaited Tom Cruise action flick. 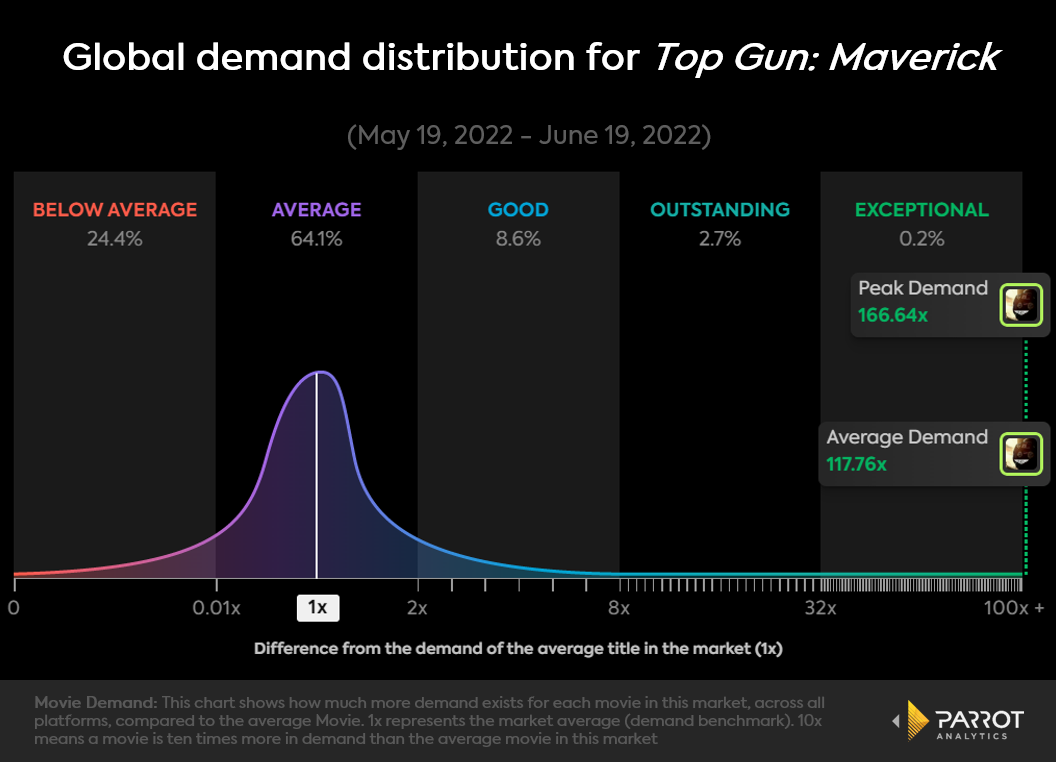 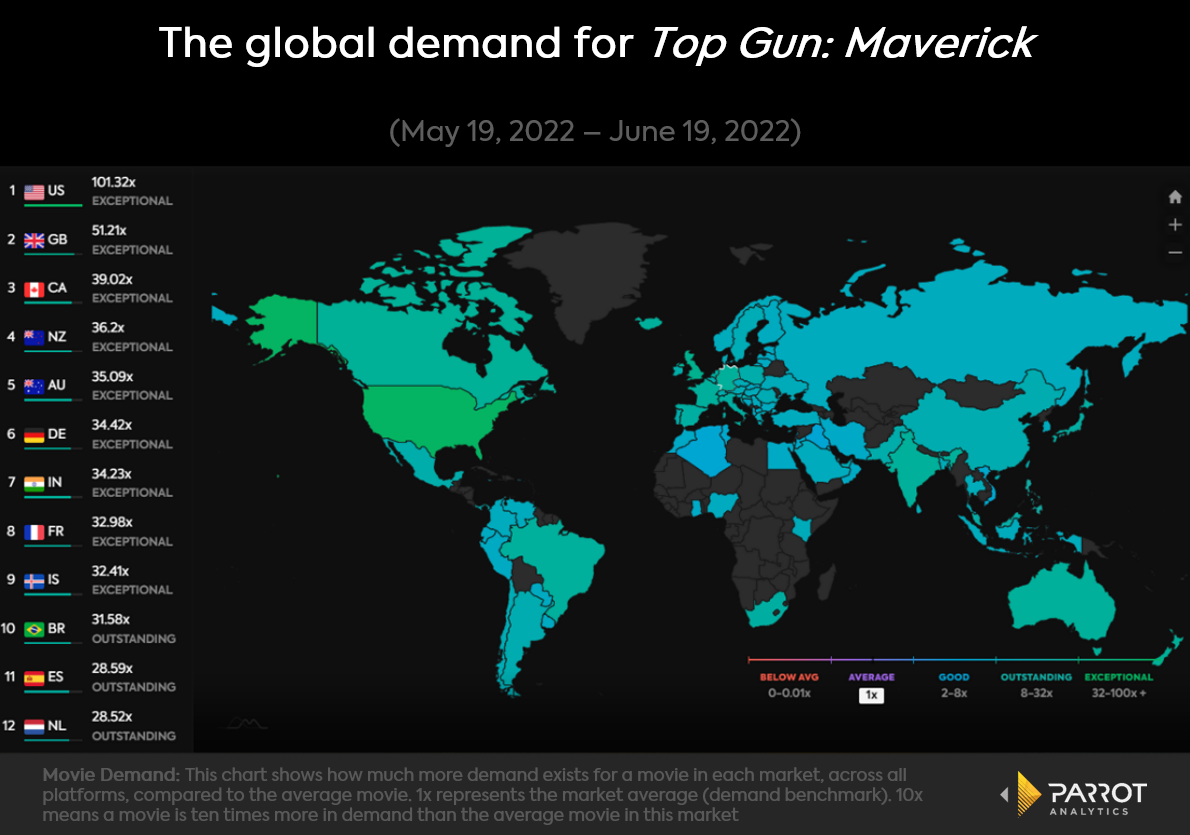 Rise in Demand for the Original Top Gun

With the success of its sequel, the first Top Gun film, which was released in 1986, has seen a spike in demand. The chart below shows the shift in demand for the first Top Gun movie over the past month. On May 28th, one day after the release of Top Gun: Maverick, the original film reached 63.9 times more demand than the average film worldwide. This was a massive leap from the level of demand on May 21st, which was just under 40 times more global demand than the average film.  This is an indication that the 2022 sequel has influenced the demand for the 1986 film in a positive way, at least in terms of its level of global demand. 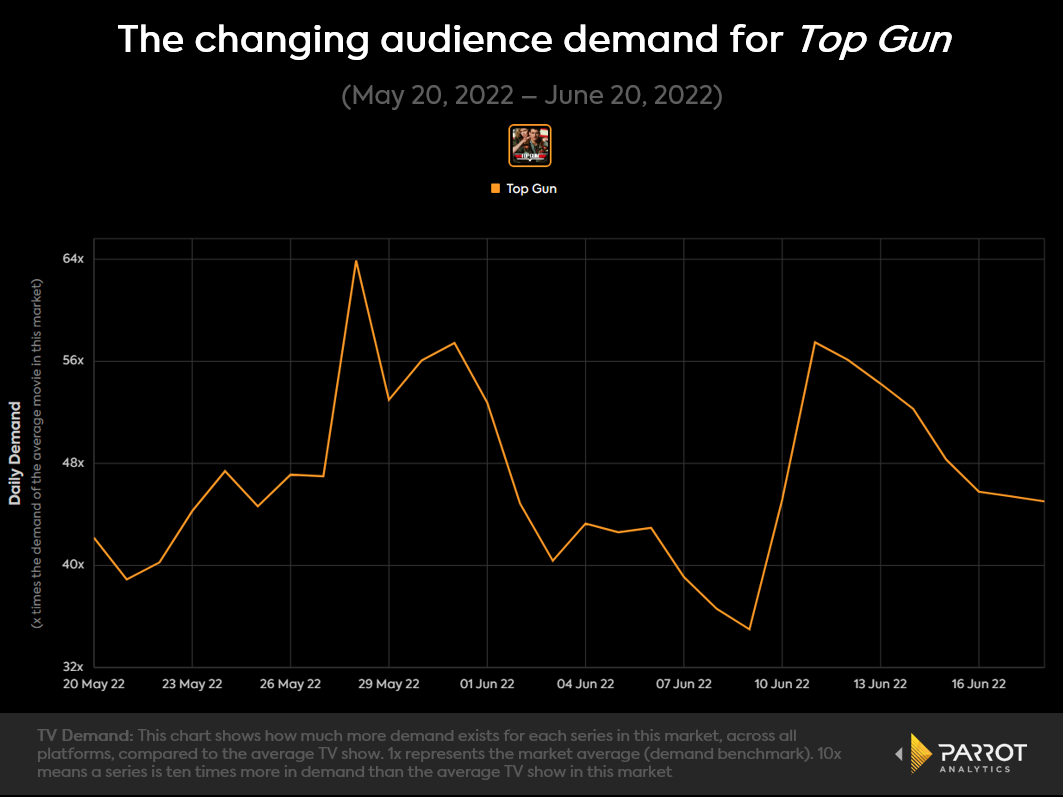 The chart below shows the shift in demand for the top films worldwide over the past thirty days. A week after its release on May 27th, Top Gun: Maverick saw a huge spike in demand, growing from just above 90 times more demand than the average film to over 160 times more demand than the average film worldwide. At this time, the movie had almost double the level of demand than both Doctor Strange in the Multiverse of Madness  and Spider-Man: No Way Home, which were the second and third most in demand films. 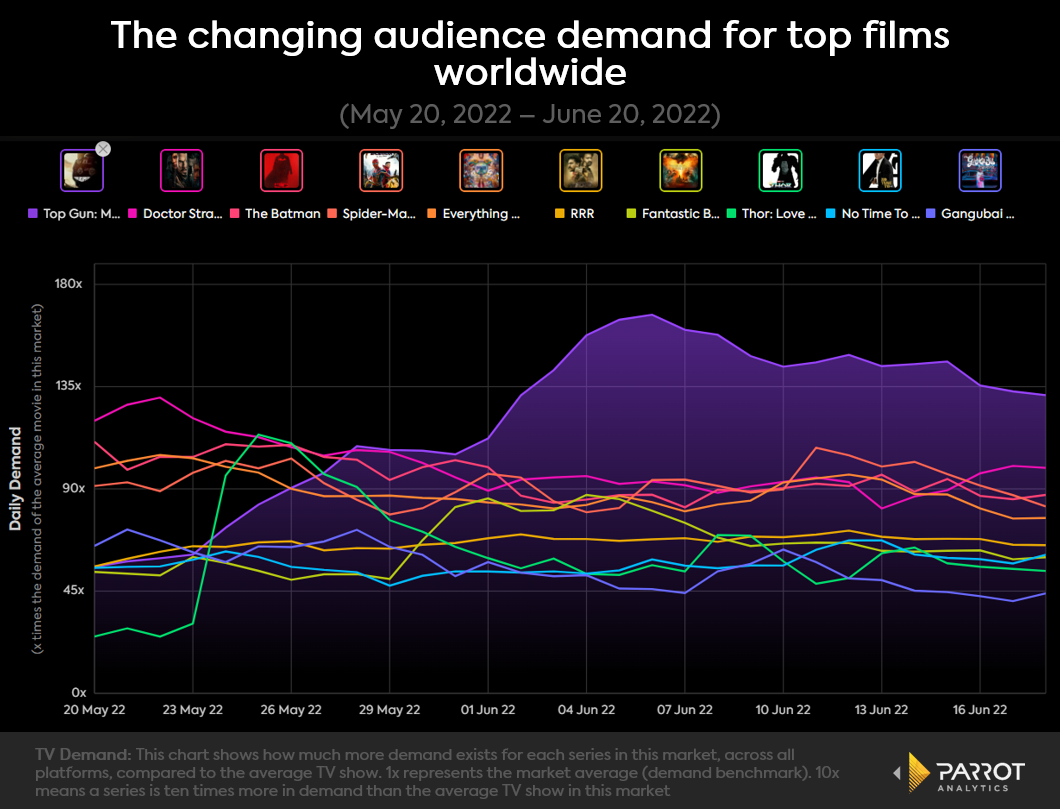 Another interesting point to note in regard to the above comparison is the consistency in earnings. While Spider-Man: No Way Home, an incredibly successful film in its own right from Marvel Studios, dropped by 67 percent in earnings during its second week - a common trend for blockbuster films after their first week after release. However, Top Gun: Maverick only dropped by 29 percent in its second week. Some have suggested that the film’s success in this way was influenced by word of mouth, which may indicate why the film still pulled in $90 million during the second week after its release.

With a record-breaking success during its first month after release, Top Gun: Maverick has definitely made an impact around the world - over three decades after its first installment. Whether it was due to the circulation of good press for the film or because of the word of mouth between audiences, the new Top Gun film saw a great turnout at its release, with a huge level of demand to show for it. With Tom Cruise as the film’s lead, it will be interesting to see how Mission: Impossible – Dead Reckoning Part One, which is set to release mid next year, will do in the wake of the new Top Gun’s massive success.