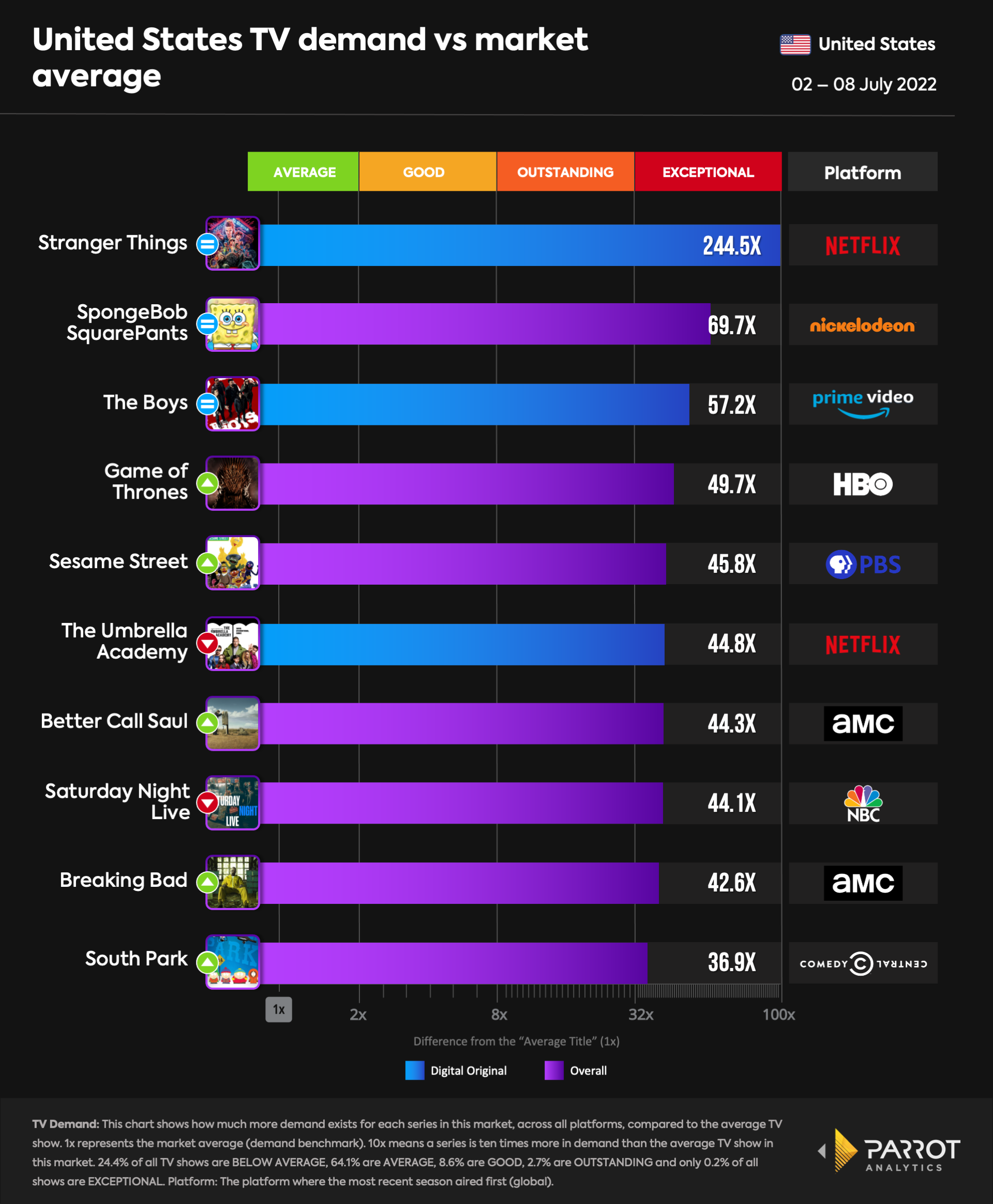 This week July 02 - 08, just when we thought Stranger Things had hit its highest demand peak yet, the sci-fi series proved us wrong with a further 39% surge which made it 244.5 times more in demand than the average series in the U.S. The jump in demand came right after the fourth season finale aired on July 01, breaking records in the U.S and global rankings.

Spongebob Squarepants had a 5.5% increase in demand this week after Nickelodeon announced a Spongebob panel for San Diego Comic Con 2022. As a result, the series saw a minor jump in demand that made it 69.7 times more in demand than the average series in the U.S. Despite a 2% decline in demand Game of Thrones moved up to fourth place in the rankings. As mentioned last week, demand for the HBO series is expected to fluctuate over the next few weeks as we head closer to the premiere date of its prequel series- House of The Dragon, which is set to air on August 21.

AMC’s Better Call Saul had a 6% increase in demand this week, moving it up to seventh place on the rankings with 44.3 times the average series demand. The jump comes ahead of the season six, pt. two release, which is set to premiere on July 11. As is usually seen with spin-offs and the originals, demand for Breaking Bad also had a 4% spike as viewers go and revisit episodes. 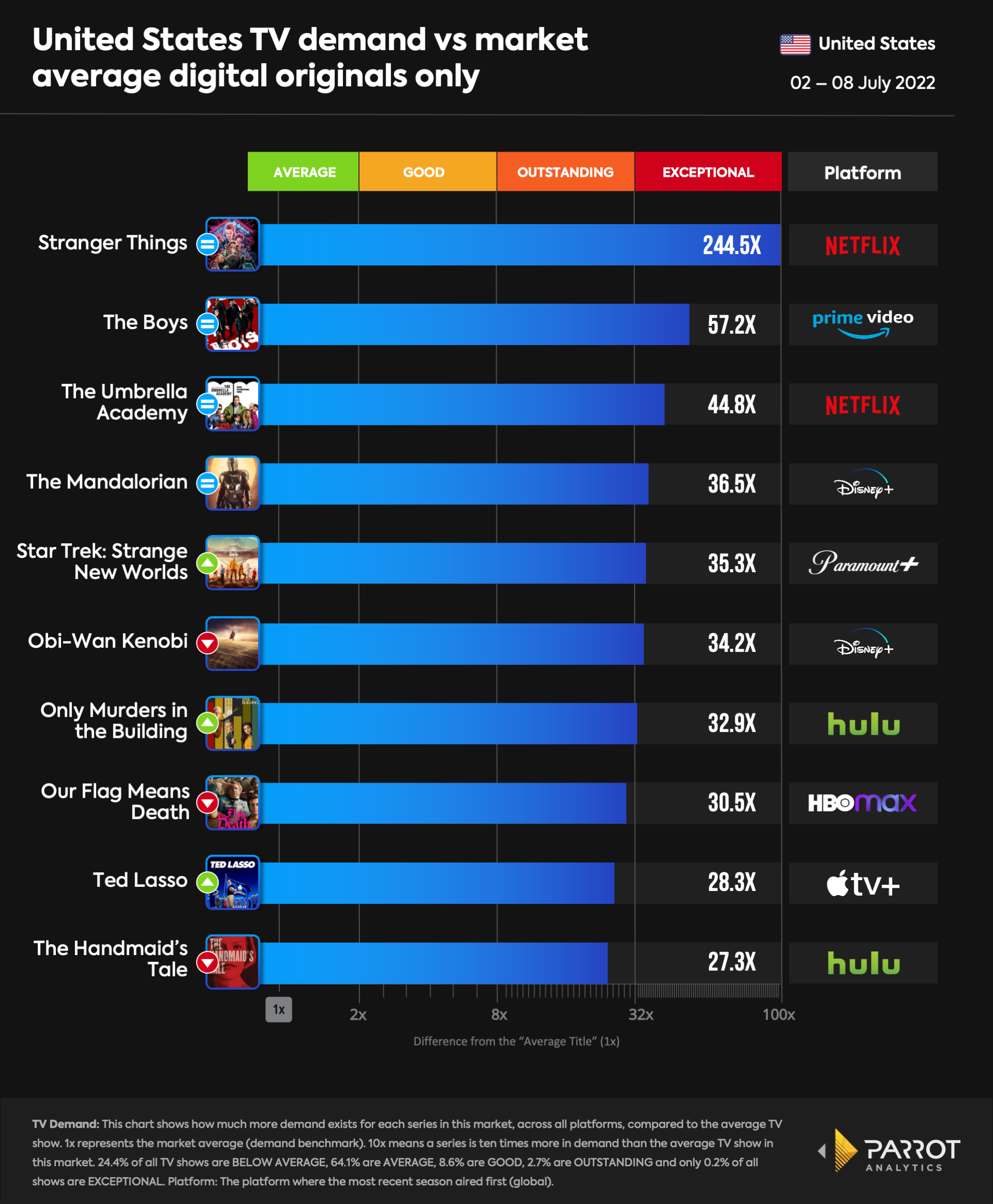 While Stranger Things’ domination of the rankings continued this week, Amazon Prime Video’s The Boys trailed behind in second place with 57.2 times the average series demand, a minor increase from last week. The Umbrella Academy also retained its position on the charts despite seeing a dramatic 18% drop in demand this week (a far cry from the 53% increase it had last week) which can likely be explained by audiences binging the latest season and then turning their attention back to Stranger Things as the latest episodes aired on July 01.

Star Trek: Strange New Worlds ended on a high note on July 07 - the finale saw a 6% increase in demand, boosting the show up to number one position on the chart with 35.3 times the average series in the U.S. for the week. After a very successful season one, the second season of the series has already been confirmed, with co-showrunner Akiva Goldsman promising the next season will be "bigger and better". Hulu’s Only Murders in The Building climbed up to seventh place this week with a further 11% increase in demand as the third episode of the latest season aired on July 05. As mentioned last week, the series is set to release episodes weekly until August 23, so we do expect to continue seeing it climb up the rankings over the next few weeks.

Apple TV+’s endearing series Ted Lasso had a 25% jump in demand this week, for reasons that can be traced back to MCU’s latest Thor movie. The mid-credits scene of the latest movie reveals that the character ‘Hercules’ is played by none other than Brett Goldstein, a.k.a fan-favorite footballer ‘Roy Kent’ from Ted Lasso. This unexpected surprise reveal spiked demand for the series quite considerably, bringing it back to the rankings in ninth place this week with 28.3 times the average series demand.