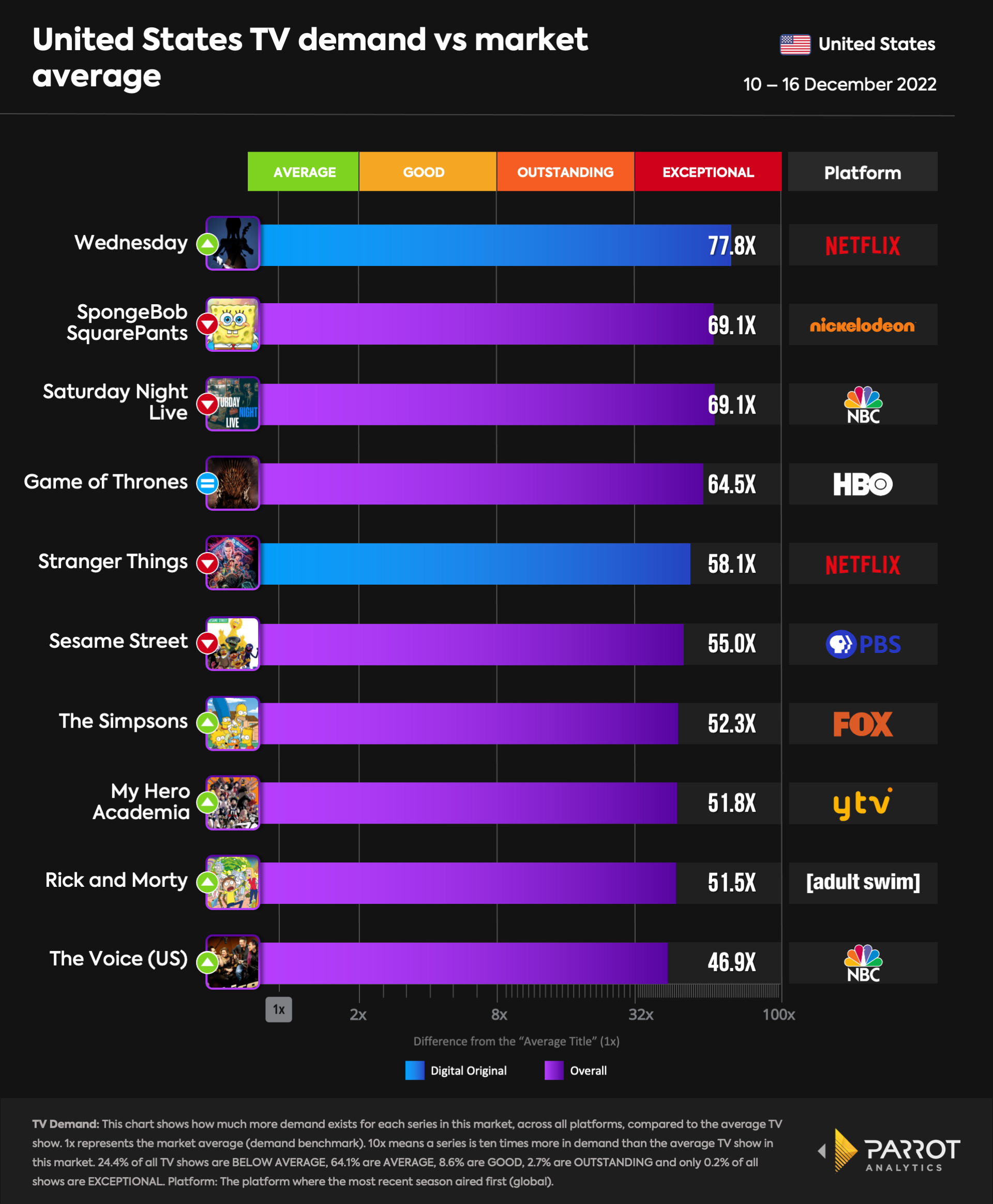 For the week of 10 - 16 December the most significant movement in both the streaming originals and overall shows rankings was from Netflix’s Wednesday, which topped the charts for the first time, ending Stranger Things‘s dominion of audience attention after almost 3 months. While Stranger Things lost its top position in the overall rankings a few weeks ago, it had still remained in first place in the streaming originals rankings by a wide margin. While demand for the series is still strong at 58.1 times the average series, Wednesday stole the spotlight this week with 77.8 times more demand than the average series - a further 27% increase as it continues to grow even 3 weeks post-release.

Spongebob Squarepants took second place in the rankings as it ceded its position to Wednesday, with 69.1 times the average series demand. In third place with a minor 3% increase in demand which put it at (almost) the same level was Saturday Night Live. The small uptick that was observed for the show can be traced back to December 10th’s episode starring Martin Short, Steve Martin and Selena Gomez as mentioned last week.

Other shows that had an increase in demand and moved up the rankings were YTV’s My Hero Academia and Adult Swim’s Rick and Morty, with 2% and 3% each. Both shows are neck and neck currently - while MHA had 51.8 times the average series demand and took eighth place, Rick and Morty wasn’t far behind with 51.5 times the average demand in ninth place. Rounding out the overall rankings, we see The Voice (US) back on the chart thanks to a 9% increase in demand which pushed it up. The spike in demand came as the series concluded (for now) on December 13 and crowned its champion for season 22. 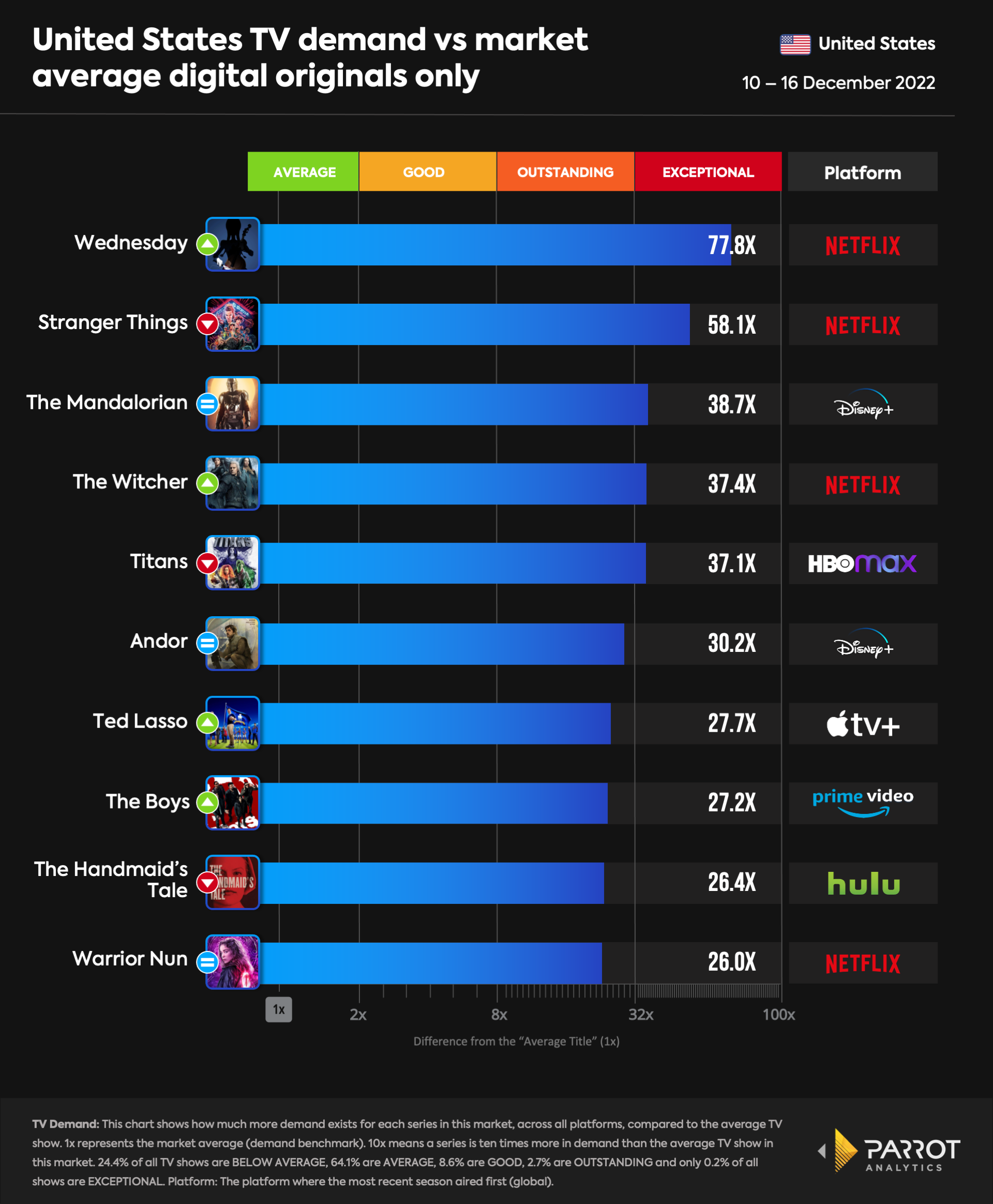 As mentioned above, Netflix’s Wednesday had the most significant increase in demand and took first place in the streaming originals rankings. What makes its movement quite interesting is that this week it was the only streaming original that had an increase, while all other series in the rankings barring The Witcher saw a decline in demand. The latter had another 5% increase this week and moved up to fourth place in the rankings with 37.4 times the average series demand.

Despite seeing some minor decline in demand two other shows moved up the rankings this week. Apple TV+’s Ted Lasso and Prime Video’s The Boys rose up to take seventh and eighth place in the rankings with a similar level of demand - Ted Lasso had 27.7 times the average, while The Boys had 27.2 times the average series demand. The main reason for the upward movement of both is that compared to the decline that other series had, demand for Ted Lasso and The Boys dropped by only 1% and 0.3% each with both shows maintaining almost the same level of demand as last week.

Rounding out the streaming originals rankings this week we see The Handmaid’s Tale in ninth place with 26.4 times the average series demand, a 9% drop from last week. Meanwhile Netflix’s Warrior Nun stayed in tenth place this week as well, despite a 5% decrease in demand. The show is likely to slip off the rankings next week as audiences turn their attention to new releases when Prime Video releases Jack Ryan’s third season on December 21 while Netflix drops the latest seasons of Emily in Paris and Alice in Borderland on December 21 and 22, followed by The Witcher: Blood Origin on December 25. Given the original show’s success, it will be interesting to see if Blood Origin manages to become another breakout hit for Netflix this season along with Wednesday.