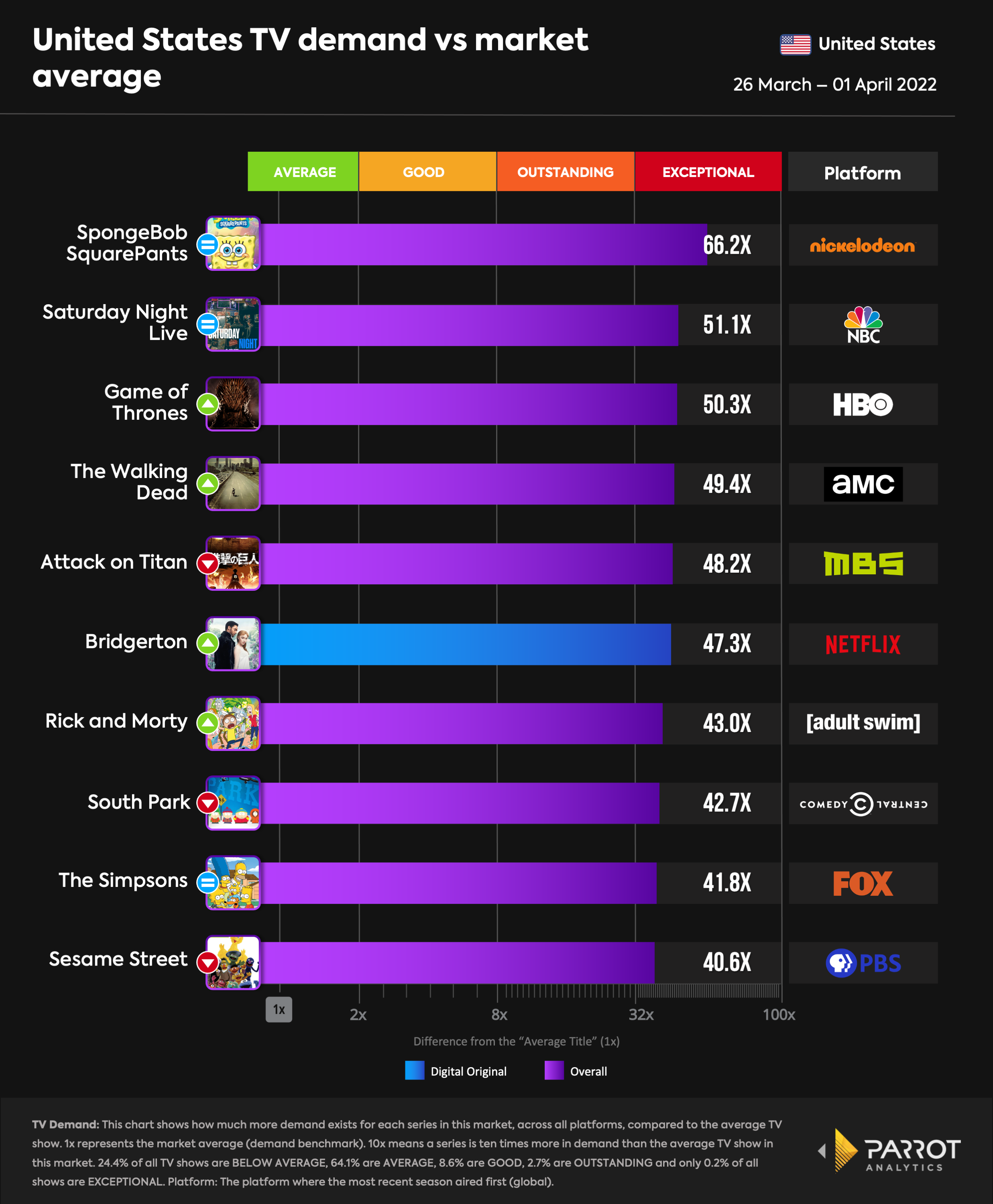 This week, 25 March – 01 April, the top two positions on the overall rankings chart remained unchanged. Spongebob Squarepants and Saturday Night Live both retained their positions in first and second place, with Spongebob seeing a 2% increase in demand this week- making it 66.2 times more in demand than the average series in the US.

Game of Thrones climbed up to third place in the rankings this week after HBO recently announced the release date for the upcoming prequel- House of the Dragon, which is set to premiere on August 21. The announcement has definitely seen a ripple of excitement in the industry, and it is likely that in the coming days fans will be revisiting Game of Thrones to brush up on their knowledge of the Targaryen House. As of this week, demand for GoT has already seen an 8% increase, making it 50.3 times more in demand than the average series in the US.

An 11% increase in demand for AMC’s The Walking Dead was observed shortly after the fourteenth episode of season eleven (part 2) aired on March 27. The series is set to wrap up its story this year, and the final season is split into 3 parts- currently there are only two more episodes left in the second part of the eleventh season, with the last one set to air on April 10. As the long-running series inches closer to its finale, we definitely expect to see more such bumps in demand in the coming few months.

Rick and Morty had a further 3% increase in demand this week, climbing up to seventh place (up from tenth) with 43 times the average series demand in the US. As mentioned last week, the increase in demand for the series comes as a result of Adult Swim’s interactive activation for the series in Las Vegas, and also after a special promo was created to celebrate the Blu-ray release of Rick and Morty seasons 1-5. 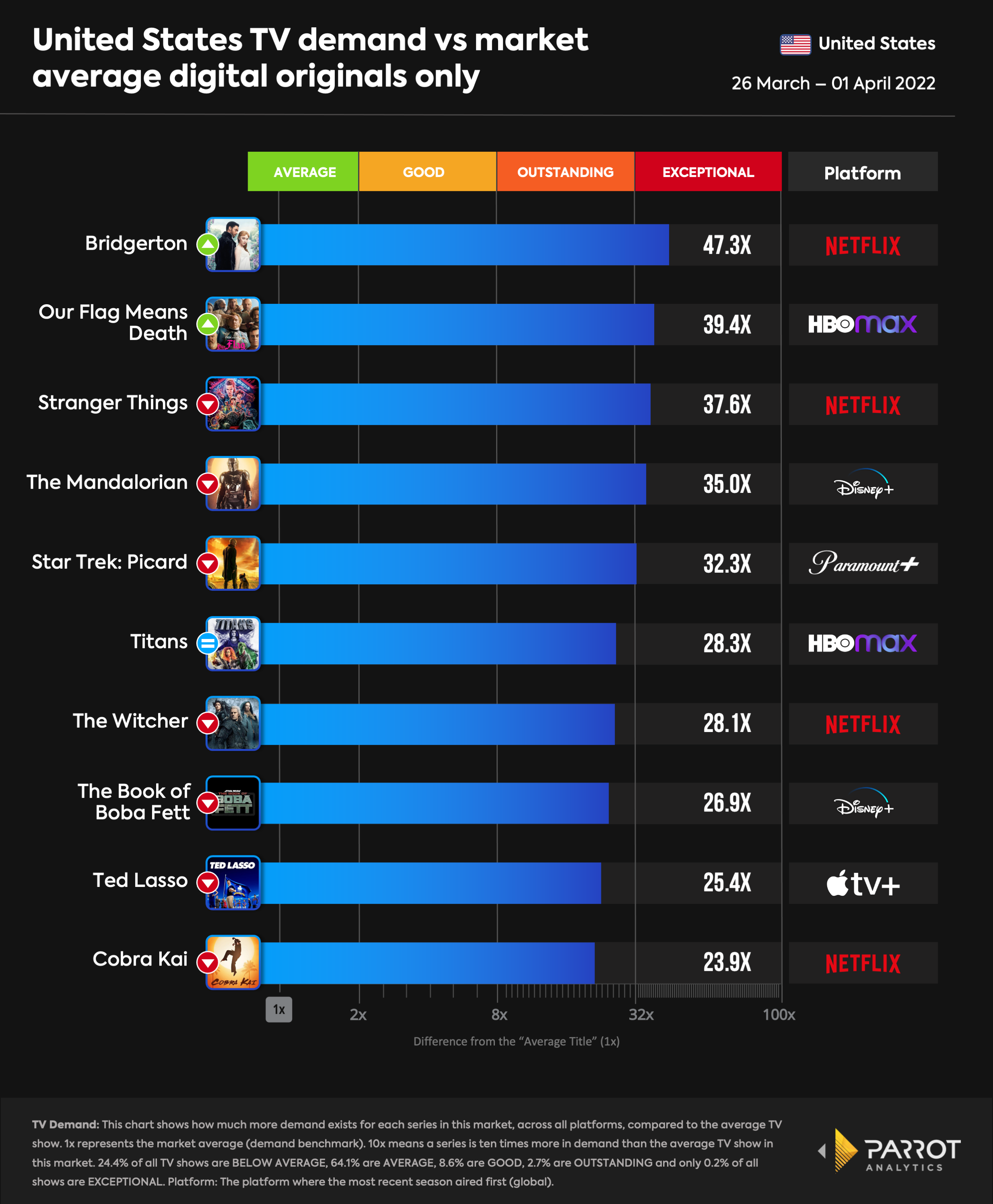 Among digital original rankings this week, Netflix’s Bridgerton stole the show with a 108% increase in demand, making its entry into the chart and climbing up the ranks to take over the top position from Stranger Things. The increase in demand for Bridgerton comes after the release of its second season on March 25. The series has been lauded for its inclusivity from its first season itself, however the addition of South Asian actresses as main characters in the second season has resulted in a lot of positive reactions among fans. This isn’t the first time we have seen an increase in audience demand for diverse and inclusive shows, and we are certain that this trend will continue to grow. Bridgerton fans might be inclined to agree, seeing as this week the show had 47.3 times the average series demand in the US.

Speaking of inclusivity and the importance of representation, another show that has taken audiences by storm recently is HBO Max’s Our Flag Means Death, which was the second most in demand digital original in the US. The series had another 14% increase in demand this week, an upward trend that has been observed since the final episode aired on March 24 and viewers began praising it for its inclusivity, story and the special place it holds in the hearts of LGBTQI+ community. The series has been described as “anti-queerbaiting” and rightfully so, considering that the show actually has six queer characters, and explores relationships among crew members. In yet another example of why representation is so important for audiences, the revelation that came in the final episode propelled OFMD to the top, making it 39.4 times more in demand than the average series in the US this week.

Stranger Things ranked third on the chart this week with 37.6 times the average series demand, a 3% increase. It was followed by Disney+’s The Mandalorian and Paramount+’s Star Trek: Picard in fourth and fifth place with neither show experiencing any significant change in demand this week.

Rounding up the top digital original rankings is Netflix’s Cobra Kai, which came in tenth place after experiencing a 9% decline in demand. Last week, The Karate Kid series saw a slight bump in demand after the co-creator let fans in on future plans for the show. However the excitement of the announcement seems to have worn off as the show slid to last place this week with only 23.9 times the average series demand in the US. The next season is set to air sometime this year, and we’re excited to see how it will unfold. In the meantime, it remains to be seen if Cobra Kai will manage to hold onto its position in the top 10 rankings over the next few months until the next season releases on Netflix.