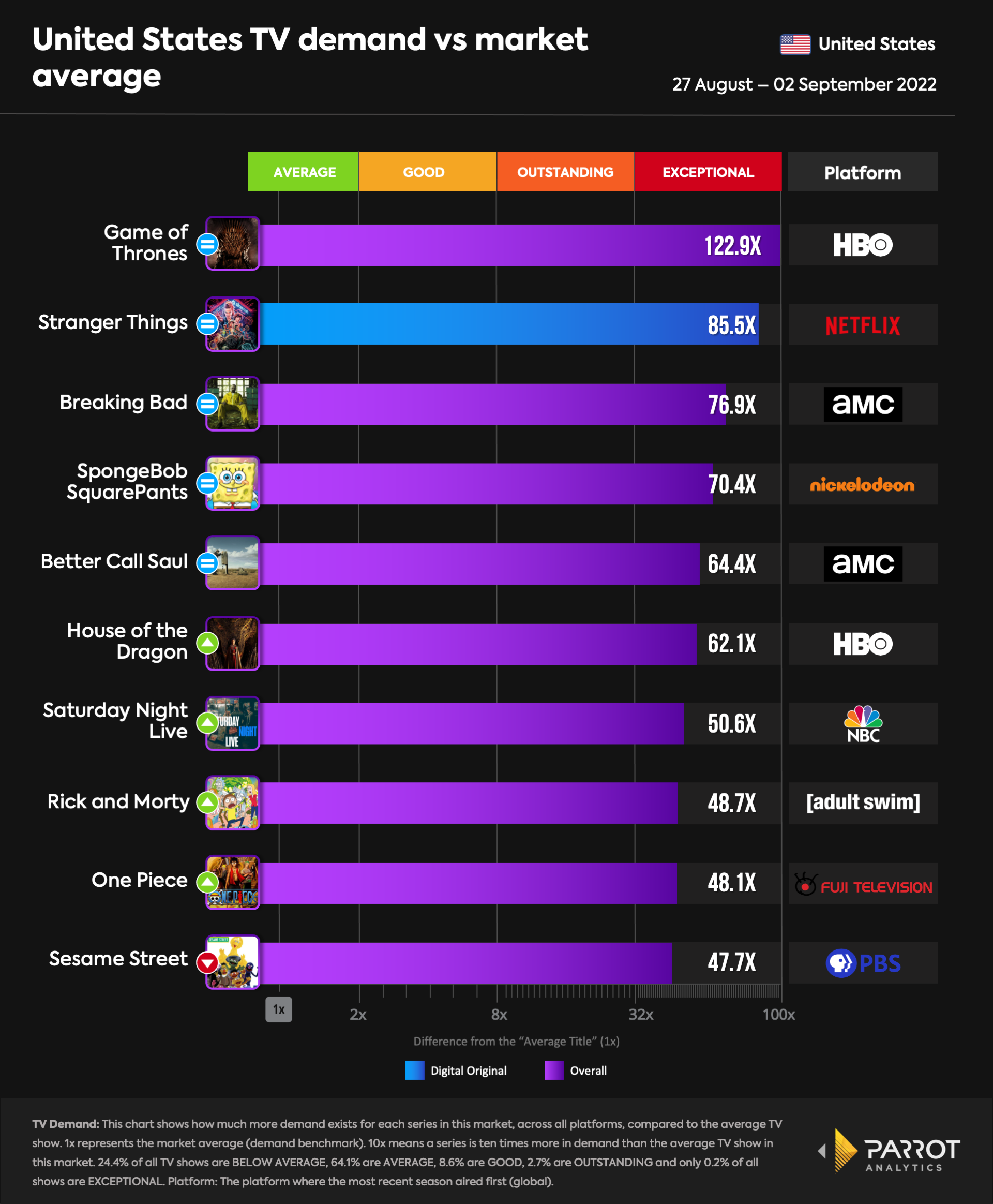 This week, Game of Thrones’ reign over the top series rankings continued, with the show being 122.9 times more in demand than the average series in the U.S, a further 12% increase since last week. As mentioned earlier, the massive demand for Game of Thrones comes as a direct result of the prequel series, House of the Dragon, premiering on August 21st. The release of its second episode on August 28 also pushed the latter up the rankings to 6th place this week with 62.1 times the average series demand, a 21% increase.

While demand for Better Call Saul continued to fall, its predecessor Breaking Bad saw a further 4% increase in demand this week, remaining in 3rd place on the rankings with 76.9 times the average series demand. There was a 12% surge in demand for Saturday Night Live this week, which came as news broke of a cast shakeup ahead of its 48th season premiere in October. The show rose up to 7th place in the rankings with 50.6 times the average series demand. While the exact date of the premiere remains unknown, fans have been left wondering about the fate of the show as Alex Moffat, Aristotle Athari and Melissa Villaseñor became the latest performers to exit the series.

Rick and Morty’s promotional moves seem to be working well for the series as demand for the show went by a further 10% this week, placing it in 8th place on the chart. Tapping into the massive fanbase of the show, Adult Swim announced a global scavenger hunt that will help bridge season 5 and 6.  The contest kicked off on August 22nd and the stakes for fans couldn’t be higher with a life sized golden statue of Rick’s head up for grabs.

The highest surge in demand among all shows was observed for One Piece this week, with the anime entering the rankings to take ninth place. It had 48.1 times more demand than the average series in the U.S., a 43% increase from last week. It’s a great time to be a One Piece fan – the manga is in its final act with new chapters dropping every week, and the recent confirmation of the smash hit One Piece Film: Red’s U.S release window has fanned the flames of anticipation among fans. The movie has so far been extremely well received in its home ground of Japan, smashing records and surpassing Top Gun: Maverick’s sales. 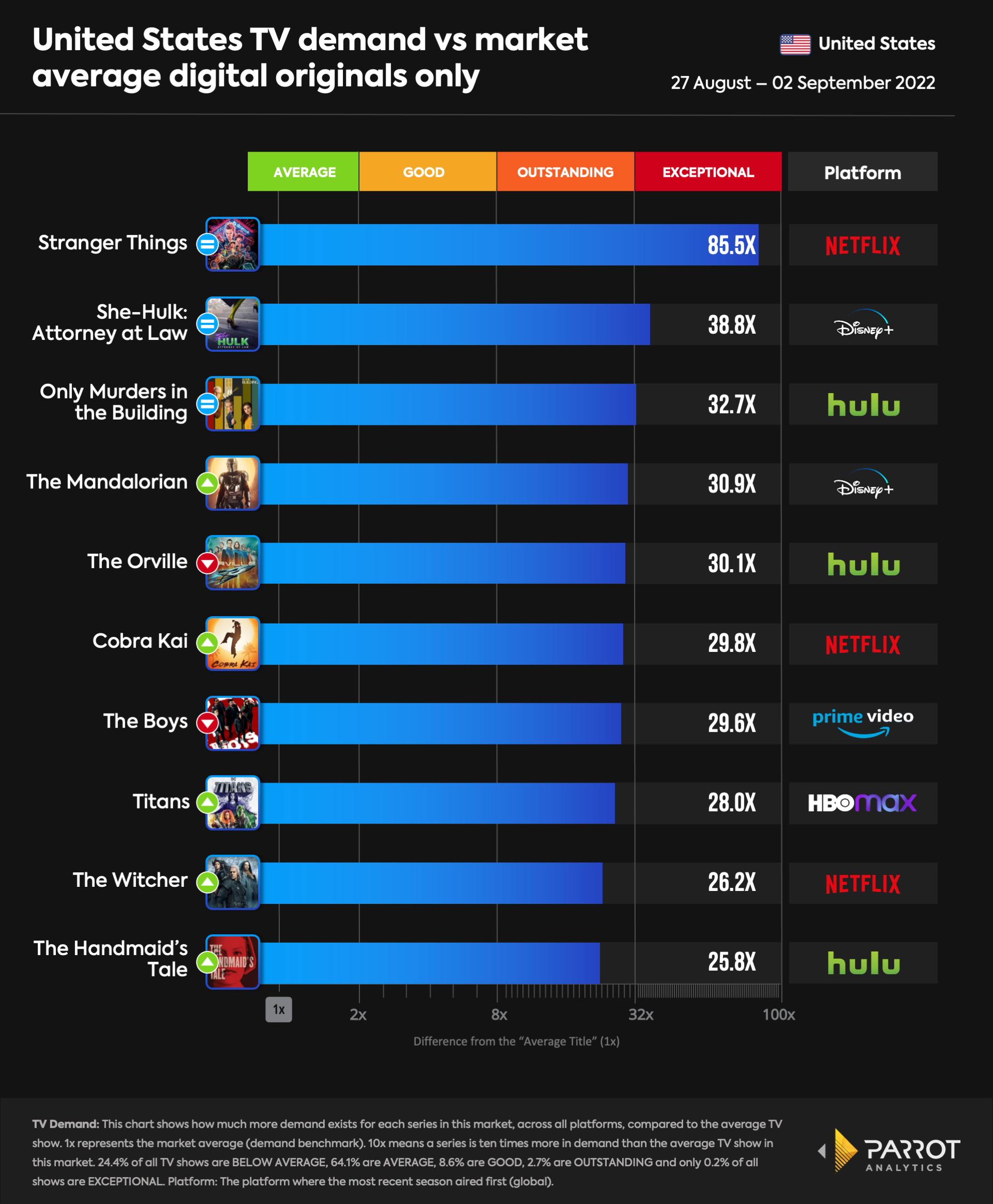 Hulu’s Only Murders in the Building saw a double digit decrease in demand after enjoying a post-finale surge last week. The show still managed to hold on to its position in 3rd place this week with 32.7 times the average series demand. Another Hulu series, The Orville was observed to have a decline in demand, sliding down to 5th place in the rankings. The show has had a solid performance in the U.S., and remained in the top 5 shows despite ending almost a month ago.

This week Cobra Kai saw a minor 2% increase in demand ahead of its season 5 premiere on September 09. The show took 6th place in the rankings this week, with 29.8 times the average series demand. The Karate Kid spin-off series has been widely successful globally, so star Ralph Macchio’s revelation that they filmed scenes for season 6 despite not being officially renewed by Netflix doesn’t come as a surprise. HBO Max’s Titans also saw a small spike in demand this week, after actor Joseph Morgan shared a first look at his costume as ‘Sebastian Blood’ with fans ahead of its season 4 release in the fall. The DC show moved up to 8th place in the rankings for the week, with 28 times the average series demand in the U.S.