Image: Tales of the Jedi, Disney Plus 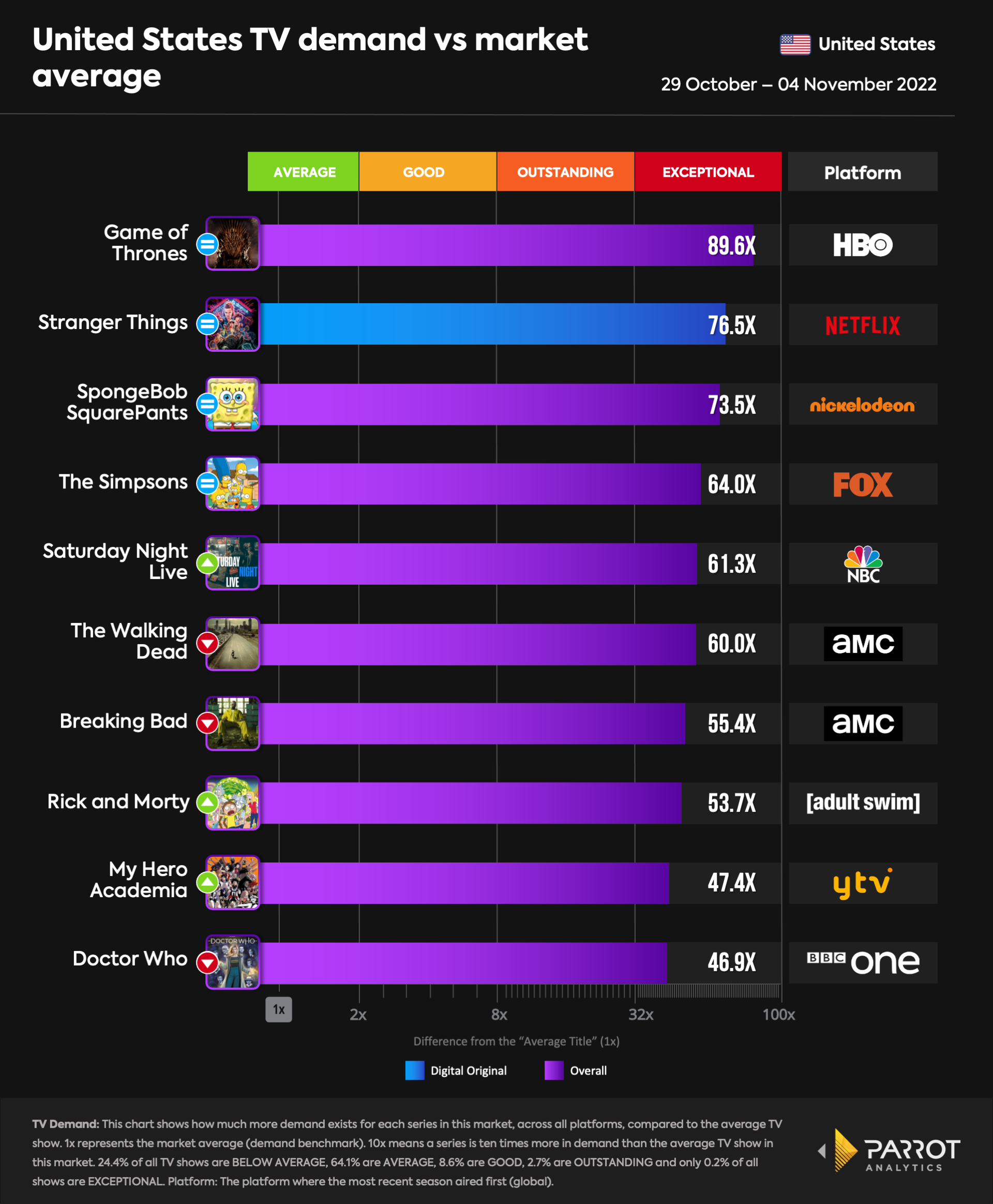 This week,  29 October - 04 November, both Game of Thrones and House of the Dragon saw a significant decline in demand. Despite a 16% drop in demand, Game of Thrones still maintained its position at the top of the rankings, while House of the Dragon slid off the top 10 rankings altogether. The top four positions remained unchanged in the overall shows chart this week, with movement being observed among shows in other positions. NBC’s Saturday Night Live rose up to fifth place as a result of an 11% increase in demand. The spike was observed over the Halloween weekend, as the sketch comedy’s episode featured Jack Harlow (who performed double duty as both the host and musical guest), Megan Thee Stallion and Tom Hanks - who reprised his iconic David S. Pumpkins SNL sketch. Increased audience attention for the series over the weekend led to it becoming 61.3 times more in demand than the average show in the U.S. this week.

Meanwhile, AMC’s Breaking Bad had 55.4 times the average series demand, a 5% decline that saw it slide to seventh place in the rankings this week. Like Game of Thrones, Breaking Bad had enjoyed an increase in demand as a result of the prequel releasing new episodes. However, with the end of the spinoff episodes, demand for the show has been steadily declining over the last few weeks as well.

Another series, Adult Swim’s Rick and Morty saw an 11% increase in demand over the Halloween weekend as well. The show is currently on hiatus, with new episodes expected to release from November 20. However, Adult Swim took to Youtube to reveal a spooky new Rick and Morty Claymation Halloween special titled “Summer Sleepover” on October 30. The move saw the series enter the rankings again this week to grab eighth place on the chart with 53.7 times the average series demand. YTV’s My Hero Academia was also back in the rankings this week taking ninth place with 47.4 times the average series demand, a 4% increase from last week. The increase in demand was observed after the anime aired the fifth episode of season 6 on October 29, which showed the series awakening “an old foe” and had fans sitting up in attention as to the direction that season 6 would take. 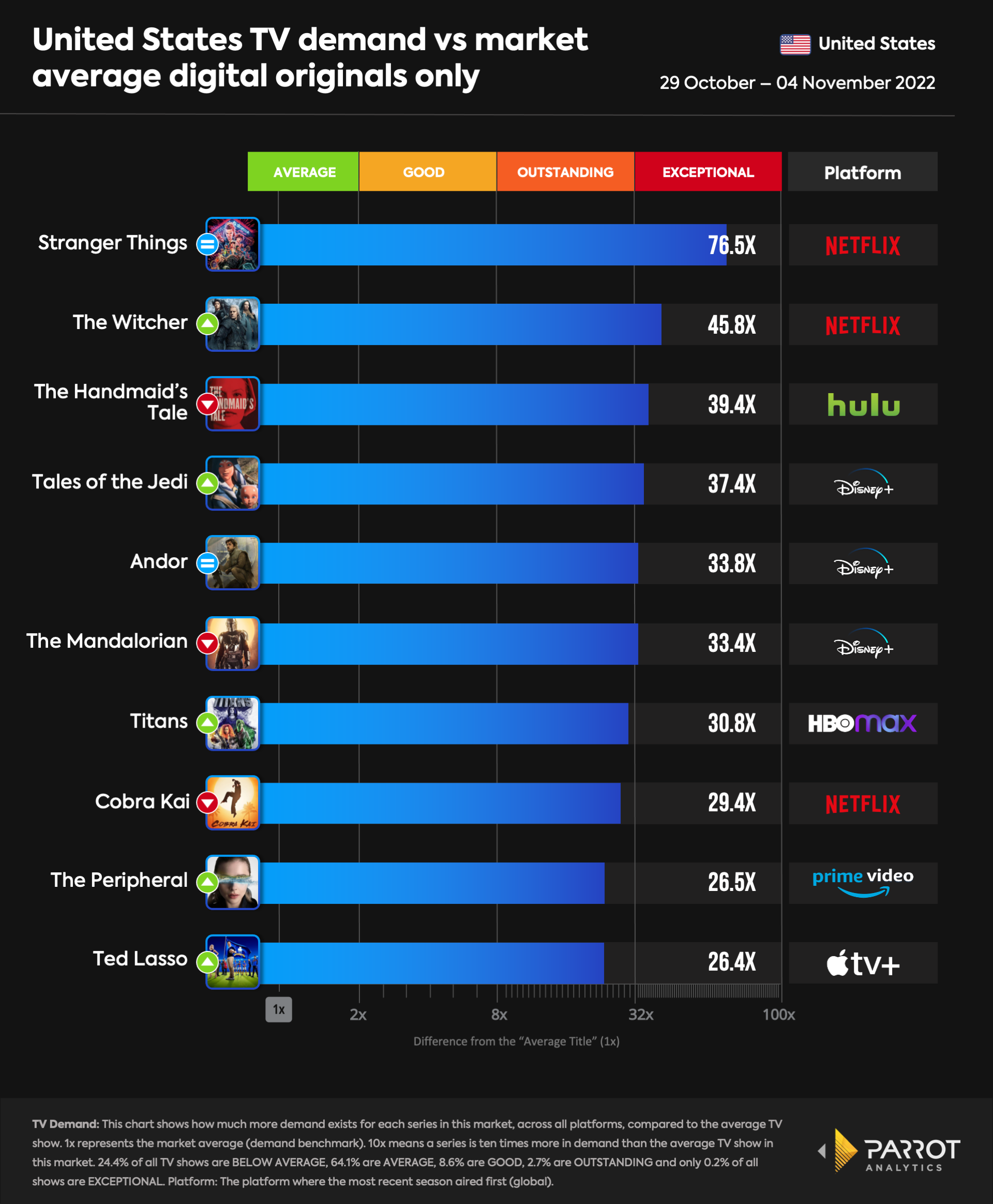 Demand for Stranger Things seems to show no signs of slowing down, with the sci-fi series topping the rankings for yet another week, and even seeing a minor increase in demand this week. Next on the chart we saw Netflix’s The Witcher take second place after a 44% surge in demand pushed it up the rankings. The show has been embroiled in controversy over the last couple of weeks amid fan protests and petitions to cancel the show altogether after Netflix said that they would be replacing Henry Cavill with Liam Hemsworth as the lead in the fourth season.

Disney+’s latest Star Wars series, Tales of the Jedi had the most significant increase in demand this week. The animated series premiered on October 26 and consists of short historical stories of Ahsoka Tano and Count Dooku. The show has seen an impressive level of demand in its premiere week, taking fourth place in the rankings with 37.4 times the average series demand in the U.S. Another Star Wars show - Andor, also had a 5% increase in demand after its ninth episode aired on November 02. The series has held strong and performed rather well over the last month and a half, and while it heads closer to its finale later this month, season 2 is already in the works for Andor with 3 new directors being brought into the fold for the next season.

HBO Max’s Titans rose up to grab seventh place in the rankings this week with 30.8 times the average series demand - a 6% increase that came as a result of the latest season premiering on November 03 with two new episodes. Amazon Prime Video’s latest show, The Peripheral saw an impressive 17% increase in demand this week, entering the rankings to take ninth place with 26.5 times more demand than the average series. The sci-fi series by Westworld creators debuted on October 21 to generally positive reviews, and based on post-release data, could be Amazon’s Rings of Power follow-up hit.