Four years ago, the Spanish drama, La Casa De Papel - or Money Heist - became the most watched non-English language show on the Netflix streaming service. The series, which was first produced in 2017 by Spanish media group, Vancouver Media Sociedad Limitada, had five seasons and reached a record level of worldwide demand; even at one point surpassing that of The Walking Dead. Now in 2022, we can see that demand is still as high as ever for non-English language series. This is made even clearer with instances such as the Japanese anime film, Jujitsu Kaisen 0 bringing in huge amounts at the box office, Korean Netflix-Original, Squid Game winning Most In-Demand Revolutionary Series in the World for 2021 in the Parrot Analytics Global TV Demand Awards, and Amazon Prime’s Hindi thriller, Mirzapur, setting new records in terms of viewer levels. With this considered, it is interesting to see where the demand for these series sits within predominantly English-speaking markets - particularly that of the United States. This article will cover the level of demand for non-English content there, as well as what genres in particular are having the most influence on these levels. 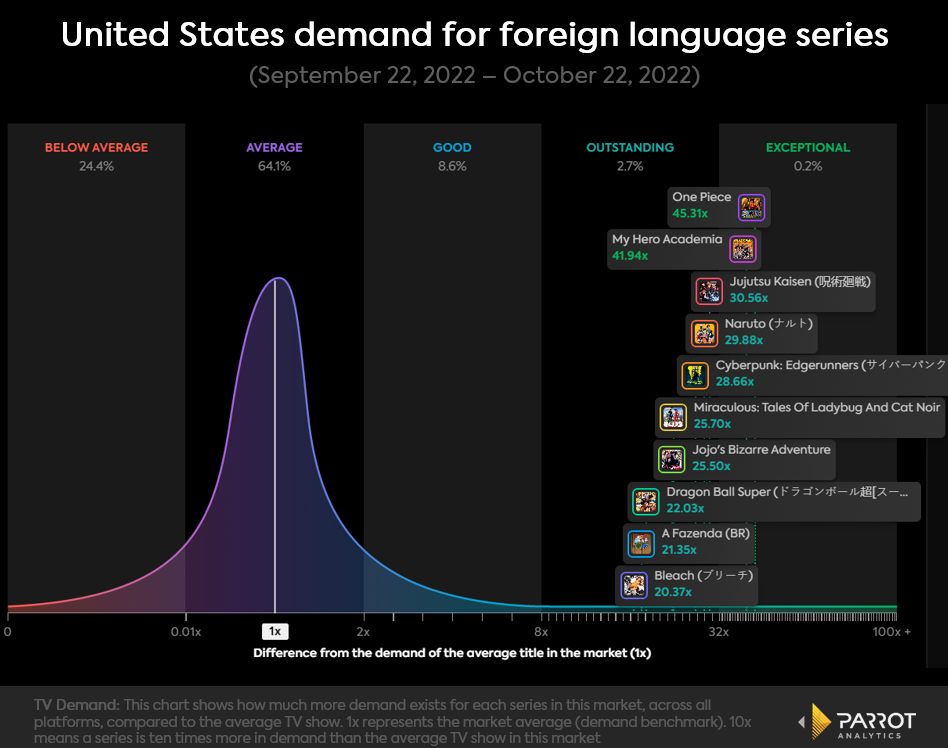 Another genre that is present on the above chart, albeit to a much lesser degree, is the children’s genre. Miraculous: Tales of Ladybug and Cat Noir, a children’s cartoon that was originally produced in French, has 25.7 times more demand than the average series in the United States. This outstanding level of demand is understandable considering the series has been seen to have grown hugely in global demand since its release in 2015.

A Fazenda, a Brazilian game show within the reality TV genre, was also amongst the most in demand series in the United States over the past month. It had 21.4 times more national demand than the average series. The show, very similar to that of United States reality series, Big Brother, follows a group of celebrities as they navigate life together in isolation from the outside world. While in Portuguese, the current outstanding level of demand from the United States market could likely be due to the first episode of its newest season airing in September this year. With seven episodes left to run, it will be interesting to see whether the series will remain consistent with this high level of demand.

Demand for other genres

As seen in the previous chart, it is clear there is a high level of demand for Japanese anime within the United States. It is also interesting, however - especially with the Anime genre becoming relatively mainstream within the Western culture - to consider what foreign language shows within other genres are receiving large amounts of demand in this market. The chart below shows the top ten most in demand foreign language series in the United States that are outside of both the Anime and Children’s genre. Noticias Telemundo is second on this chart, under the earlier mentioned A Fazenda, with 15.7 times more national demand than the average series. With this being a Spanish language news broadcast that is directed toward the Hispanic community in the United States, it is understandable it has been sitting at an outstanding level of demand in the United States over the past month. In addition to this, its production network became the most subscribed to broadcasting network on Youtube in 2020 - regardless of language. This could be an indication of viewer’s loyalty to the source of news. Very closely following this show is another news broadcast, Noticiero Univision, also directed toward the Hispanic community in North America. 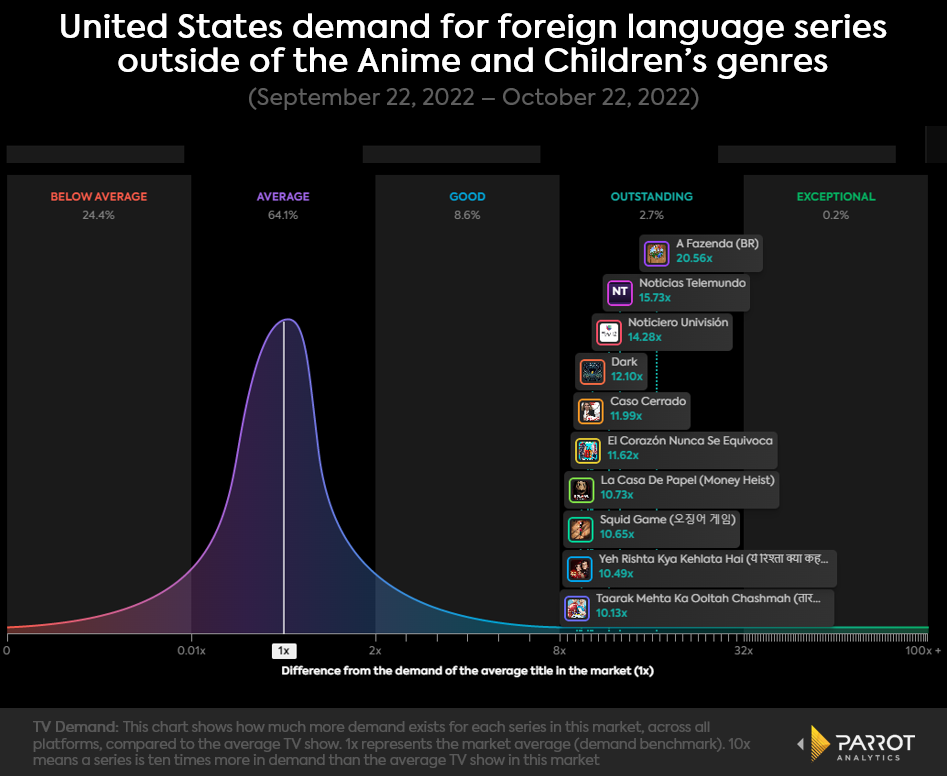 German series, Dark, is the fourth on the chart above. This is interesting, considering its final episode aired on Netflix in 2020. Over the past thirty days, the Thriller series had 12.1 times more demand than the average series in the United States. This outstanding level of demand over the past month could be due to

With its viewership rising 200% between 2019 and 2021, Korean language television series, particularly K-Dramas, are clearly becoming mainstream content in the United States market. Globally, 2021 saw Squid Game, a survival-themed horror-drama, become the most in-demand series debut of 2021. Furthermore, in the US market, the Netflix Original reached number one on the nation’s streaming charts - and remained there for a significant amount of time. With a number of other Korean shows, such as All of Us Are Dead, which reached the top ten non-English series on Netflix after just one season, and Korean films, such as the 2019 Parasite, which reached over $50 million in the United States, it’s no wonder a number of streaming services, Netflix in particular, have been investing in Korean produced content. With this said, it is interesting to consider how Korean content has been doing in terms of recent demand within the United States market.

The chart below shows the Korean series with the most demand from the United States market over the past 30 days. The top of this list is Squid Game, with 10.7 times more demand in the US demand than the average series worldwide. All other series on the below chart have below 10 times more demand than the average series nationally. With two up-and-coming Korean shows set to release on Netflix in November, such as psychological thriller Somebody, which has almost reached five hundred thousand views on Youtube for its trailer, it will be interesting to see how the level of demand in the United States might be influenced over the next few months. 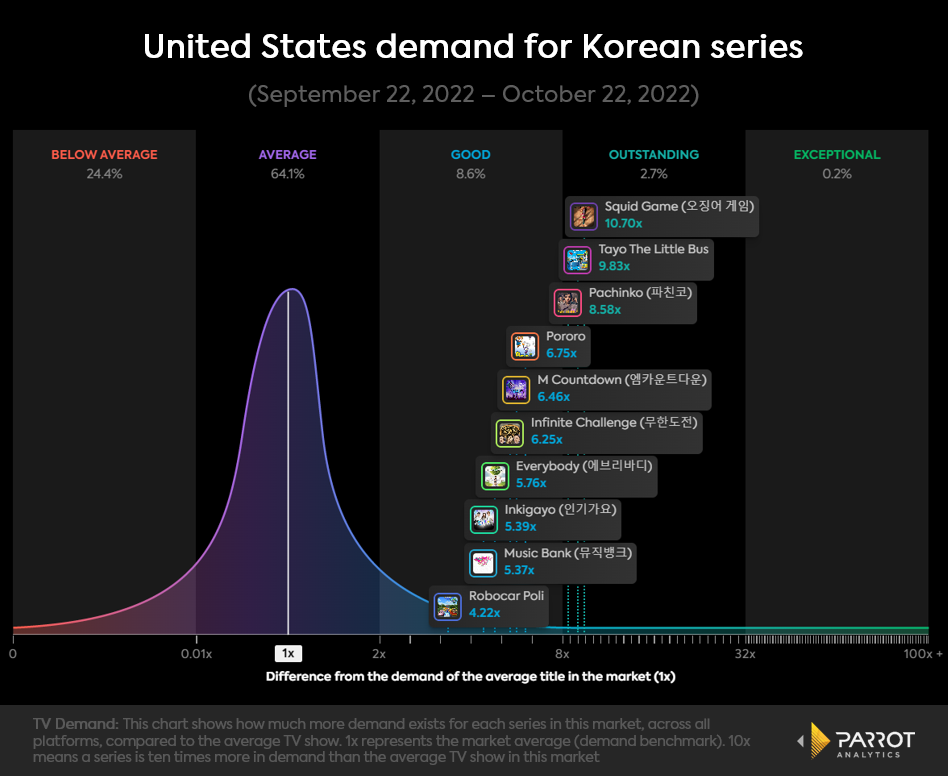 Demand beyond the home market

As the world grows more connected through technology, it is understandable audiences have been branching out when it comes to television content and watching series that may not be in their first language. With past examples such as La Casa De Papel, Squid Game, and Mirzapur reaching new records in terms of their popularity worldwide and outside of their respective home markets, perhaps it can be said that a gripping story can go beyond cultures and create waves across a diverse range of markets. And as foreign-language content becomes more mainstream within the United States market, it will be interesting to see what series capture the nation, as well as the world, next.