In this whitepaper we showcase how demand for a title translates to monetization for content suppliers and buyers using Content Valuation, the patented technology invented by Parrot Analytics.

For decades, content was valued by a couple of simple metrics. The industry used to operate a little simpler, but the internet’s meteoric increase in household penetration led the way for new irrevocable consumer behaviors. Streaming, for example, changed the way content was valued. A title that brought in subscribers can be just as valuable to a title that kept someone from canceling. A movie that appeals to an audience demographic that a platform is struggling to reach has more value than a film that may get lost in the noise.

How we value content has changed and, so with it, how we measure a piece of content’s true value. Parrot Analytics is the only company that has created a measurement system for understanding how demand for a title translates to monetization for content suppliers and buyers.

Parrot Analytics’ Content Valuation measurement system can determine the valuation of any title for any platform or distribution avenue based on any scenario. There are a broad range of questions that come up at numerous points of a production cycle, from before the project is ordered to long after it airs. These can include, but are not limited to, determining whether to acquire or produce a title, determining where it should be released including whether to go theatrical or not, determining the overall value contribution to an existing library, determining the value of an entire library, or determining projected value across multiple seasons for a TV show, or the value of a film to a streamer five years after the fact. This paper examines some of these key scenarios:

The True Value of original series on streaming platforms:

Big acquisition titles like these, in terms of drawing in new subscribers, are great at reaching new customers and different taste clusters, broadening the total addressable market for Netflix in several key regions. Their continued performance over the next several years is also a key indicator of strong value for a platform. 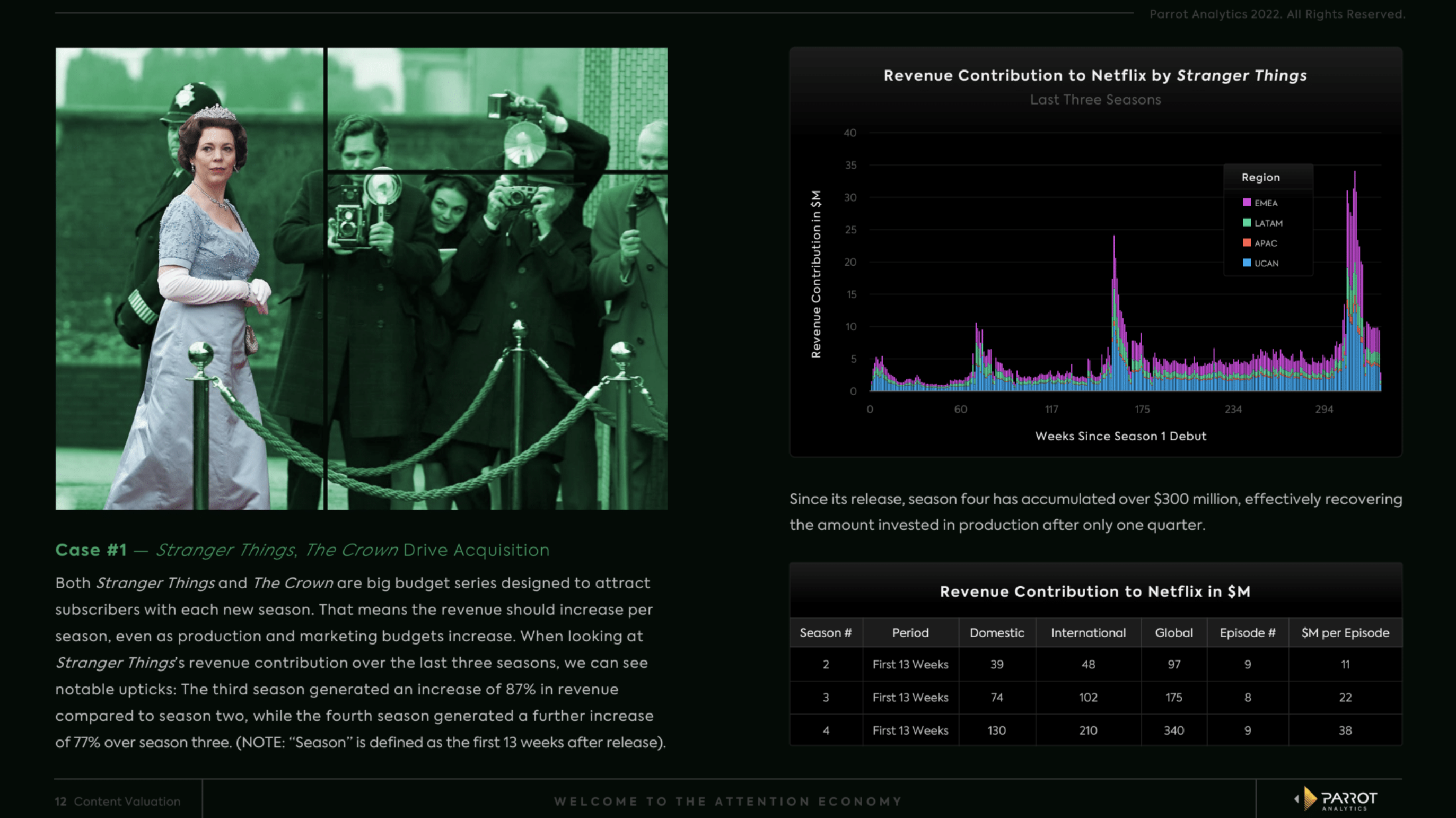 The direct-to-consumer movies Netflix is releasing are being subsidized by both the television series that have a stronger profit margin for Netflix, and cheaper films like the Holiday titles and teen jaunts that require less marketing, less reliance on A-list talent, and overall production budget. This leads to the inevitable next question: should Netflix have released The Gray Man or Red Notice as theatrical titles? 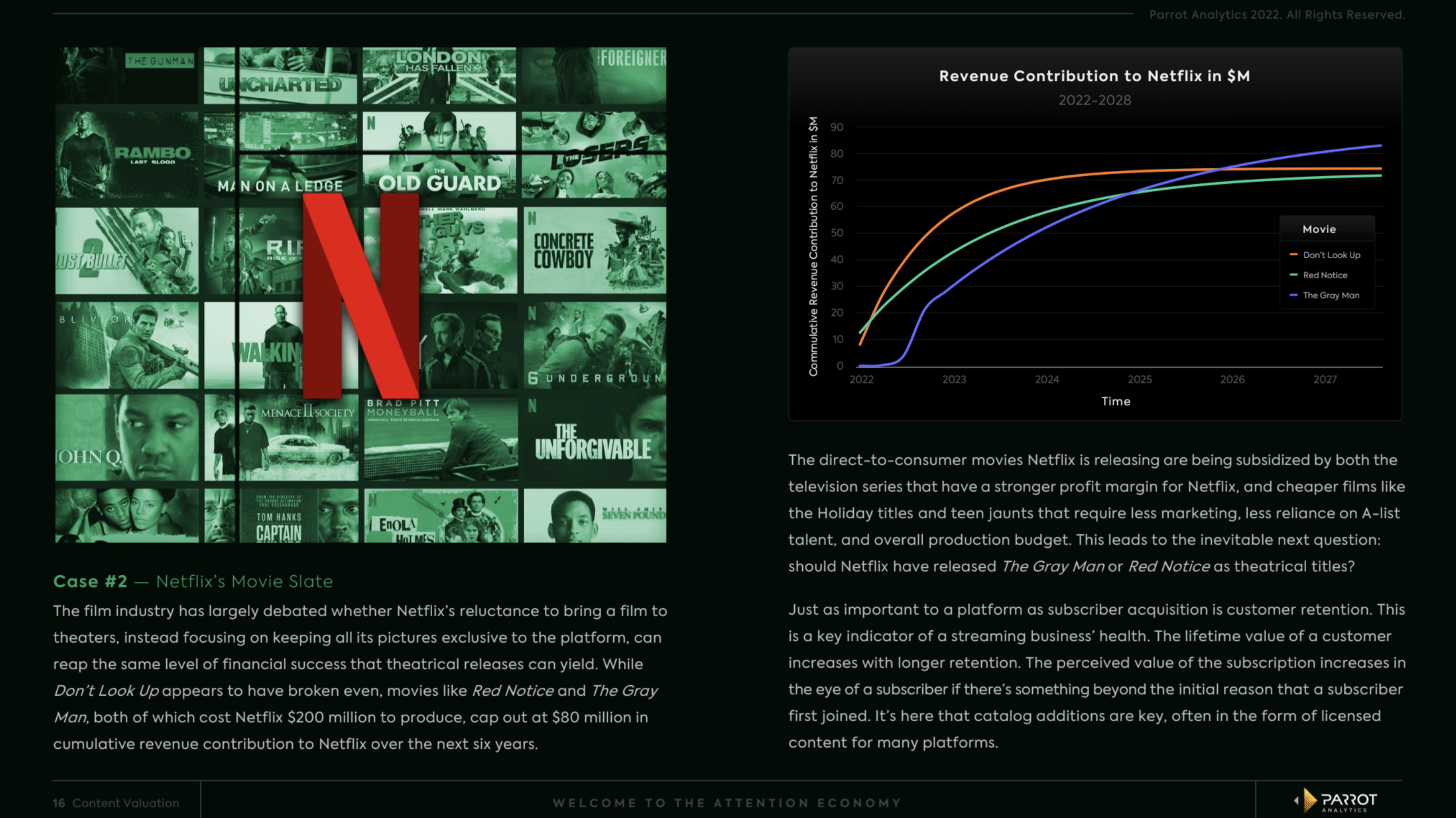 Licensed series and the power of strong retention titles:

Much like the stickiness that procedurals carry with them, long running comedies and specifically sitcoms, are often strong retention titles. Friends and The Office scored $450 million and $500 million deals respectively for Warner Bros. Discovery and NBCUniversal to pull them off Netflix and bring them back to their own platforms, HBO Max and Peacock. To compete, Netflix acquired the global rights to Seinfeld at a comparable price tag. 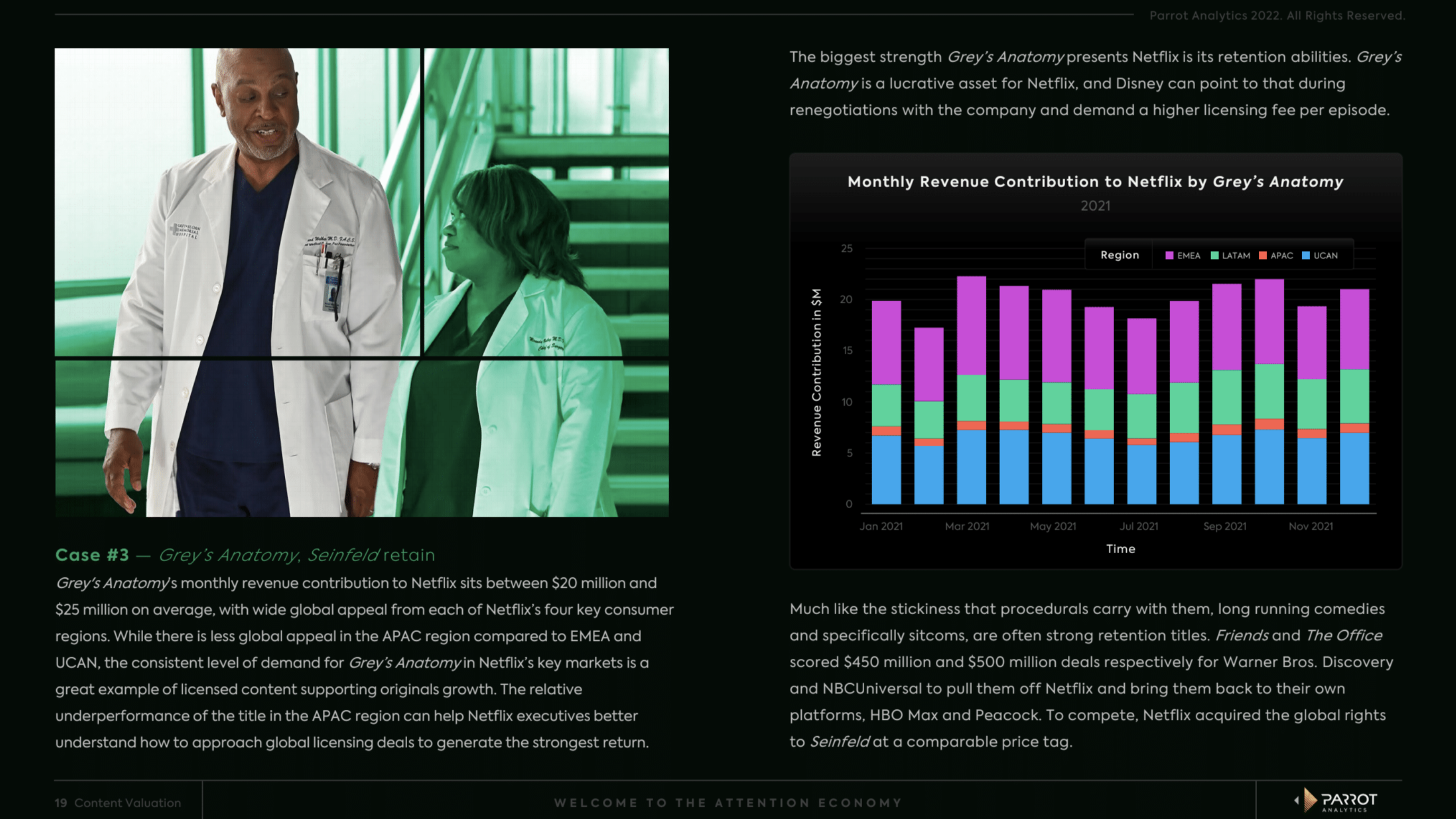 Measuring the value of talent to a successful TV or film property:

Ted Lasso has a low decay rate (it’s not losing much demand in the off-season) compared to other comedies. Part of that low decay rate comes from consistent demand for Jason Sudeikis. Content Valuation can also determine the value an actor, showrunner, or director brings to a title. While Jason Sudeikis signed a reported deal for $1 million an episode, Parrot Analytics’ Content Valuation system determined that in domestic markets, his contribution can be as large as 47%. Given that the value per episode for the first three seasons tops $14 million and that 42% of the value is generated in domestic markets, we estimate Jason Sudeikis’ contribution at close to $3 million per episode. 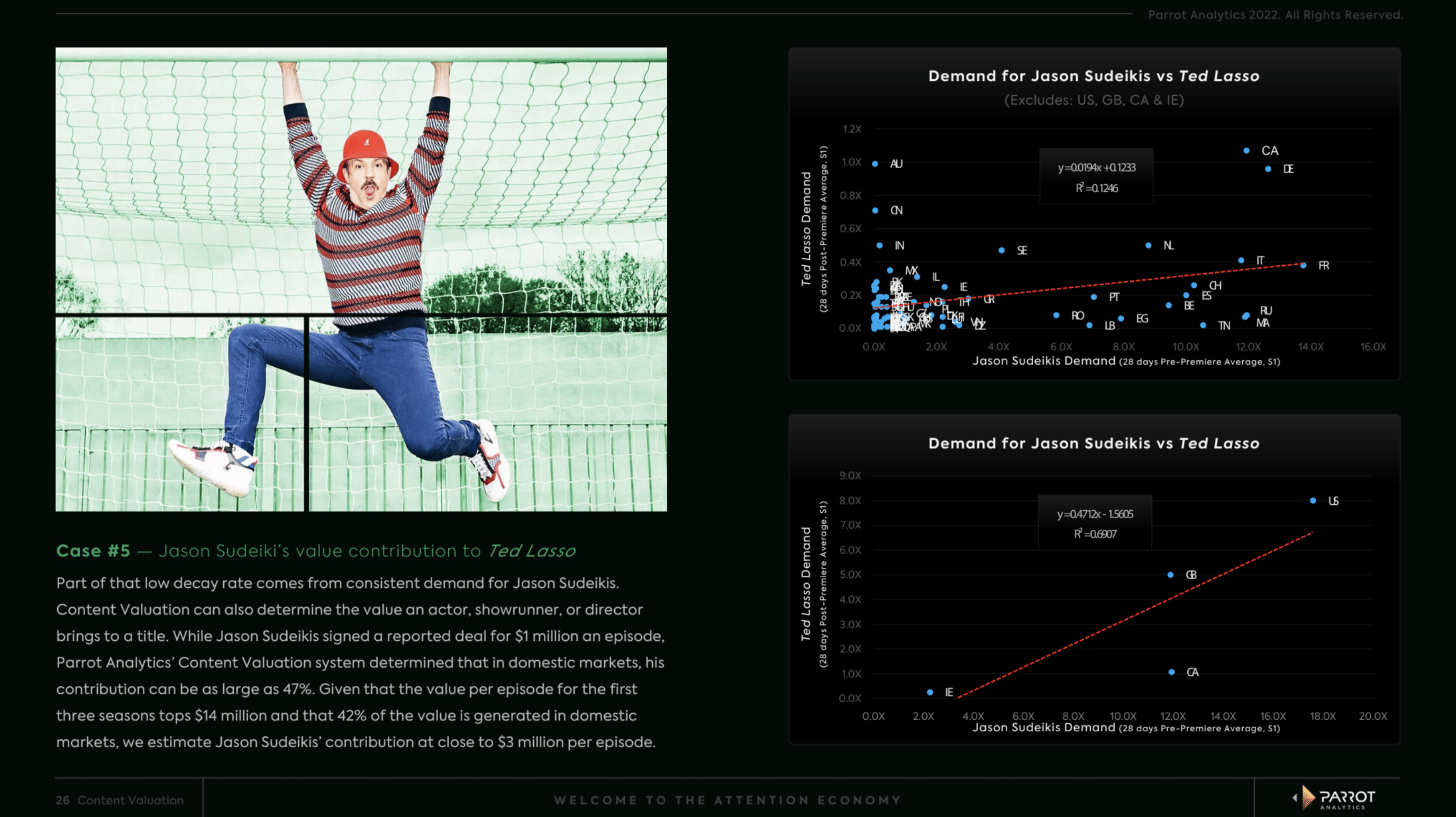 This paper so far demonstrates how content valuation can help teams with financial planning and analysis, content programming, distribution and sales, and corporate strategy sides. It’s challenging trying to predict what’s going to be a global hit, what will become a key high acquisition title in a country or region with relatively low household penetration, or what’s the type of sticky series that will keep a streaming platform a necessity in homes. Recognizing that not every piece of content has the same overall value because not every piece of content is trying to achieve the same goal is integral to prioritizing investment areas.

Parrot Analytics’ content valuation measurement system helps executives and creative teams evaluate how valuable a title, or a collection of titles, are to their audience base. Ascertaining how vital a film or TV show is for growing their streaming service is the difference between acquiring a title that brings in millions of subscribers or acquiring one that results in millions of dollars misspent.