The Action genre and its success in modern films

It has been reported that action and adventure are, by quite a significant amount, the most popular movie genres within the United States and Canada over the past two decades. The chart below shows the ten films with the most global demand over last month. The action genre, particularly superhero films, dominates this list, with Black Panther: Wakanda Forever at the top - just shy of 100 times more demand than the average film worldwide. The Marvel film, which ended the superhero franchise’s fourth phase, reached new box office records in its opening weekend. This exceptional level of demand would most likely have influenced the spike in demand for the original Black Panther film, which reached 83.7 times more demand than the average film worldwide - making it third on this list, just after DC films’ Black Adam, which had 85 times more demand than the average film worldwide. 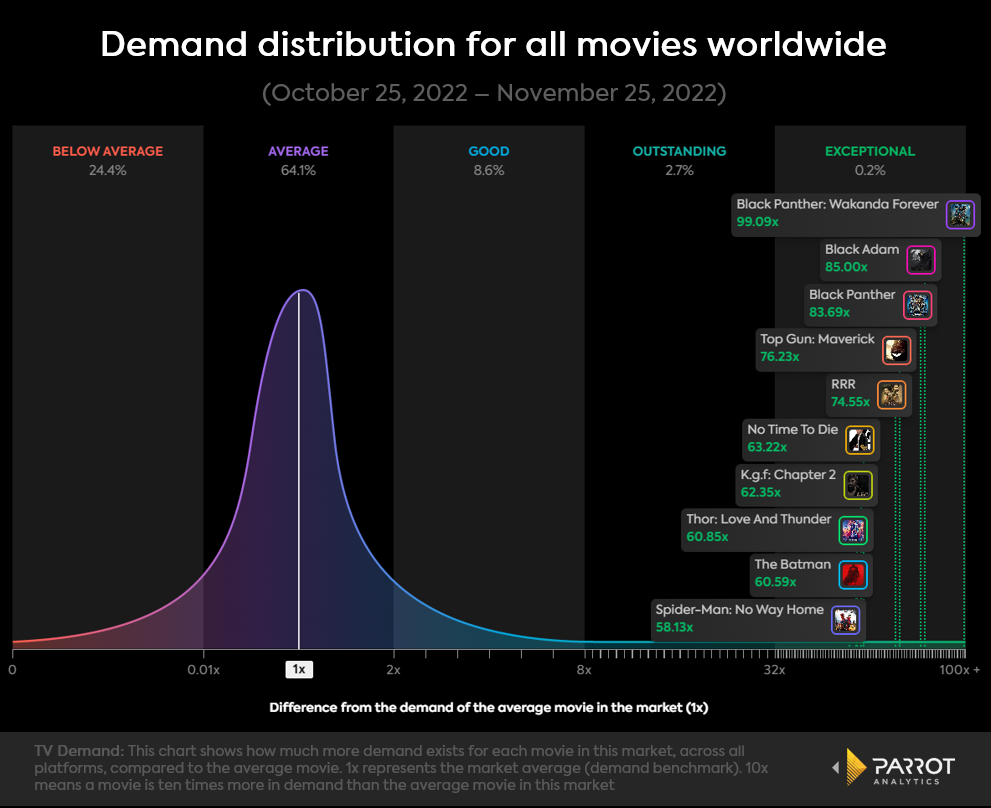 The above mentioned films, alongside Thor: Love and Thunder, The Batman, and Spider-man: No Way Home, make up more than half of the films on this list, an indication of the longevity of the superhero genre. However, it is interesting to consider the other action films that make up this list. For instance, Top Gun: Maverick, released over six months ago, is still sitting at an exceptional level of demand. No Time To Die, the twenty-fifth film in the James Bond franchise, is in a similar position, having been released in October last year and sitting comfortably at an exceptional level of demand - just under 65 times more demand than the average film worldwide. With this being said, whether it is the nostalgia of the films’ predecessors, or the star-studded casts, these action films have performed relatively similar to those within the superhero subgenre in terms of their global demand.

A similar lineup occurred over the month of November last year in terms of the most in demand films worldwide. The chart below shows the demand distribution for all films worldwide over November of 2021. The action genre made up a hundred percent of this list, with half of these being superhero films. Venom: Let There Be Carnage was at the top with 100.1 times more demand than the average film worldwide, while Eternals, another Marvel film, sat at 88 times more global demand than the average film. No Time To Die, Dune, Godzilla Vs. Kong, Free Guy, and F9: The Fast Saga were the top non-superhero films at this time - all with exceptional levels of demand. 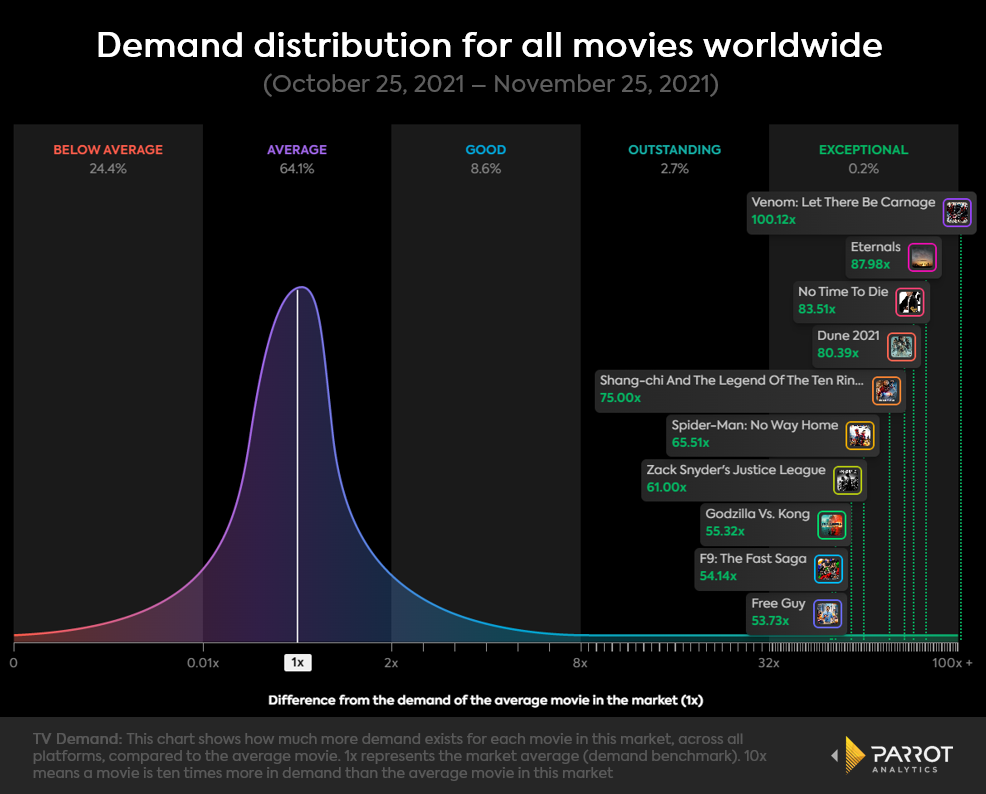 Beyond the Superhero Genre

With the huge levels of demand for the superhero genre encompassing not just the demand distribution for the action genre, but the demand distribution for all genres, it is important to consider how much demand there is for the action genre as a whole - and whether or not it is only held up by superhero films. This, however, may not be the case, if the chart below is anything to go by. Films within the action genre, including David Leitch’s Bullet Train and Hindi action-adventure Brahmāstra Part One: Shiva, make up over half of the ten films with the most global demand outside of superhero films. 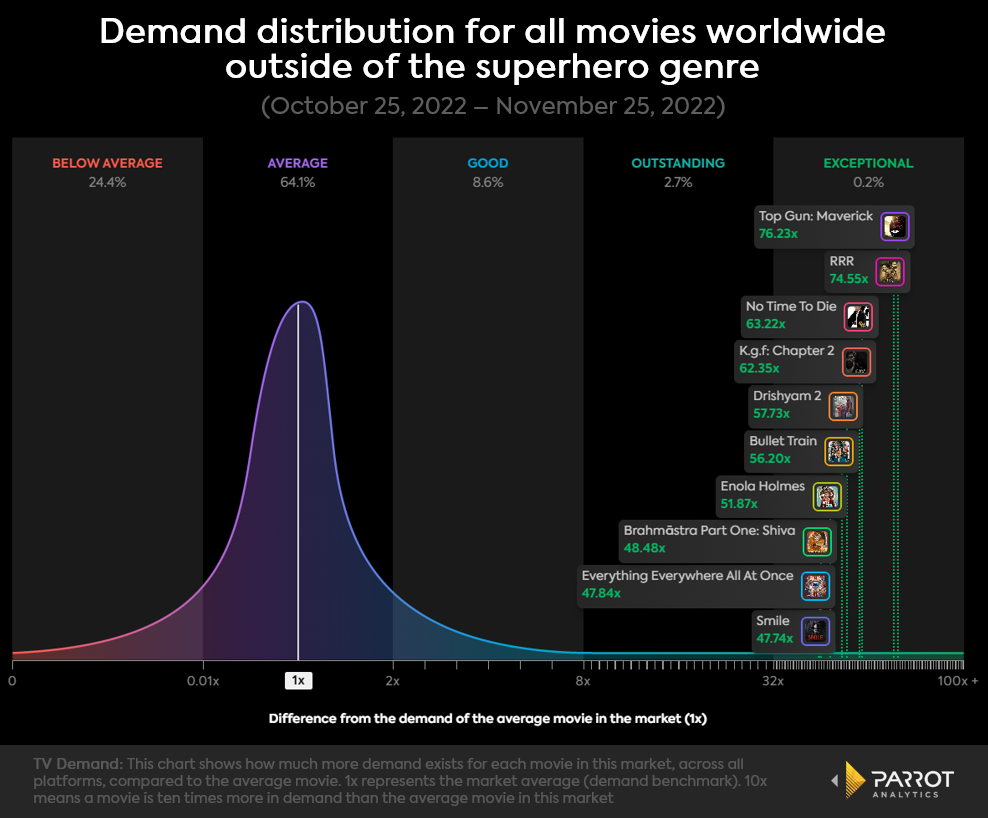 While it might be that these exceptional levels of demand that are apparent on the  above chart could have been influenced by that of the superhero genre, the success of the films below points toward the high level of global demand for the action genre as a whole. The same, perhaps to a slightly lesser extent, can also be said for television series.

The chart below shows the most in demand series over the month of November. The Game of Thrones prequel House of the Dragon had 119.7 times more demand than the average series worldwide. Much like Game of Thrones itself, which had 117.3 times more demand than the average series worldwide, as well as a number of other series listed below, it is heavily fantasy-based. While all series on the chart below sit within the action genre, the heavier fantasy elements, as can be seen in anime, One Piece, and, to a different extent, AMC Networks’ The Walking Dead - which both have well over 60 times more global demand than the average series worldwide - make for an interesting differentiation between the type of action films with the most demand and the type of action series with the most demand. While the most in demand non-superhero action films of last month had a lot more spy and military elements, the series shown in the chart below, excluding The Boys and She-Hulk: Attorney At Law, include a lot more other-worldly themes, such as dragons, spaceships, and zombies. 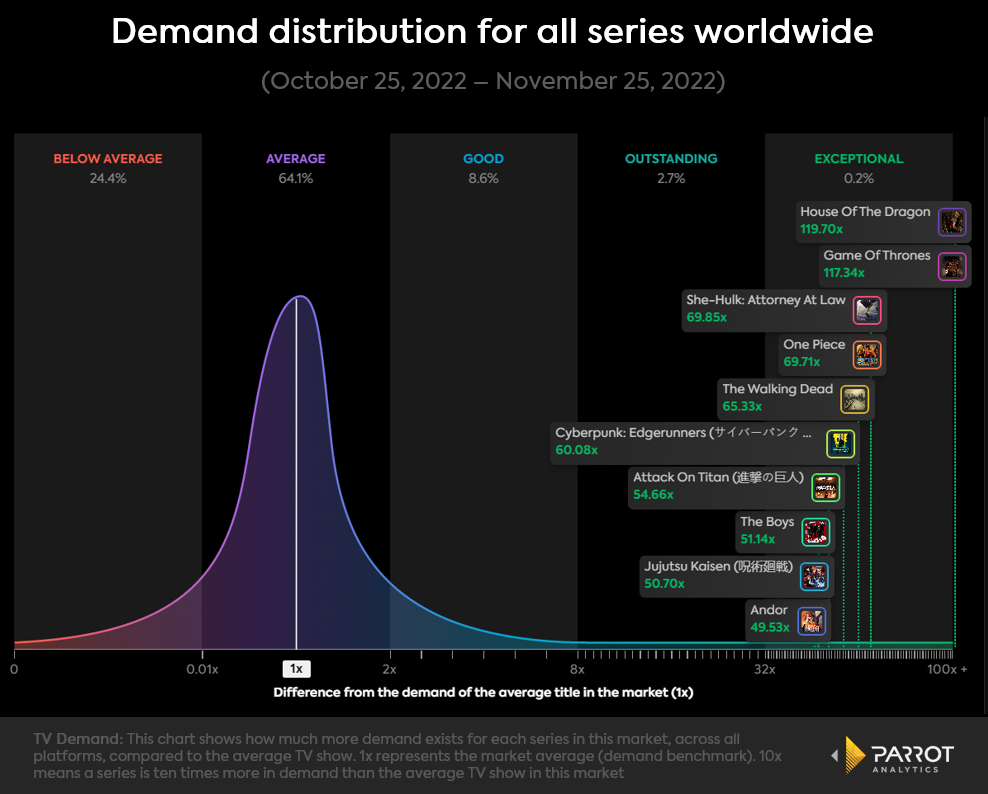 The Audience of Today - and Yesterday

With superhero films, fantasy series, horror shows, and movies set in outer-space, the action genre covers a lot of ground in terms of themes and elements. This, on its own, could be the reason for the high level of demand we see for the genre from today’s global audience. After all, with so many options, there is likely something for everyone. In addition to this, the nostalgia factor for many action films today could also be playing a part in the level of demand. Whether it is Tom Cruise’s return as Maverick in the latest Top Gun installment - after over three decades, or old and favorite comic books being brought to life from Marvel Studios, it can even be said that the action genre brings generations together. With this being said, particularly in the build up to the Parrot-powered 5th Annual Global Demand Awards, it will be exciting to see which action-themed films and series take out the top spots.